mutron said:
I really hope this means one day we get a 50s Original Collection Flying V....
Also didn't 70s Vs have the short stubby headstocks and covered pickups?
Click to expand...

. Yes. A few bands played these. Schenker, accept, James Hetfield although I think Hetfield’s was a copy (?). But they usually took the covers off. But definitely a step close to v’s that people actually want. (Sorry those 2018/2019 half guard variants do nothing for me) Seems like guitar center has a bunch used, suspect they are close outs. And seriously. Had enough of black and cherry c’s and explorers.
Y
Last edited: Jan 11, 2020
B

skhan007 said:
Yes!! That explorer is the one Paul Stanley played on the Destroyer tour! Just seeing it makes me feel like a kid again (a good thing).
Click to expand... Wrong headstock shape on the V though. They make a very different more acurate 70's V in the custom shop they could have easily done it here too with these simple features.

Yeah 70s Vs are all about that stubby headstock! Totally bizarre why they didn't do that...


TattooedCarrot said:
Wrong headstock shape on the V though. They make a very different more acurate 70's V in the custom shop they could have easily done it here too with these simple features.

FractalGarden said:
I recently sold my classic white Explorer, and can say without a doubt that an ebony board makes the guitar look much better.
Click to expand...

Would you prefer the tone, though? I always find ebony to have too much snap and brightness.
C

Any thoughts on these other ’50s style Flying V and Explorer models? I wonder if '50s style refers to the neck profile only or if the Explorers have the '58 body as opposed to the '76. I prefer the former but from the pic it looks like a '76 I think.

Tonelover said:
Any thoughts on these other ’50s style Flying V and Explorer models? I wonder if '50s style refers to the neck profile only or if the Explorers have the '58 body as opposed to the '76. I prefer the former but from the pic it looks like a '76 I think.

What is different about the correct '58 shape? Is the 76' sharper?

I think I've sort of become accustomed to the '76 look.

Basically the '76 is a bit smaller and more pointy.

I think they're white only. I would be all over these if they came in black.

Dashface said:
But whyyyyyyyyyy can’t they put a decent sized neck on the V

Cup of Cheese said:
It looks like these have binding on the neck. Was that normal for that era?
Click to expand...

No, no binding and shorter less pointy headstock. Here's my '74. 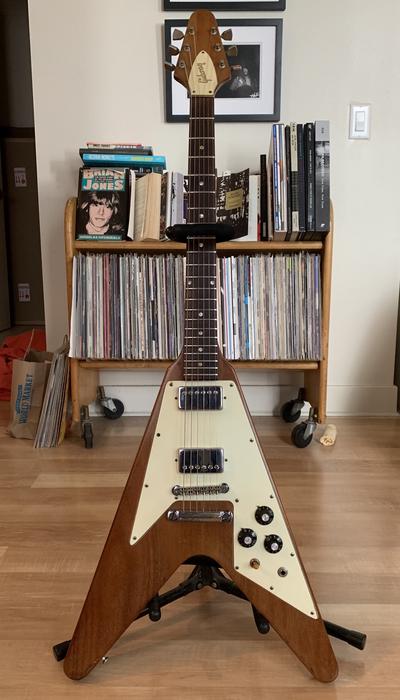 I’ll get the V if it’s under or around two grand. Any more then I’ll pass. There’s nothing special about building these.

FractalGarden said:
I recently sold my classic white Explorer, and can say without a doubt that an ebony board makes the guitar look much better.
Click to expand...

morgan918 said:
No, no binding and shorter less pointy headstock. Here's my '74.

I thought the binding without the block inlays looked weird. The V I have, which is a newer one, has no binding and dot inlays

TattooedCarrot said:
Wrong headstock shape on the V though. They make a very different more acurate 70's V in the custom shop they could have easily done it here too with these simple features.

They never bother with the details on the standard line reissues. The Explorer '84 had the wrong body contours and headstock size, the RD reissue didn't have the body bevels (or the 25.5" scale the original spec had), these new Explorers and Vs appear to just be recent issue explorers/Vs with different pickups and knobs. There is nothing to get excited about with these reissues.

I think the wrong headstock makes them look like they don’t know what they are doing, or don’t care.

if a company makes videos on how they are not going to miss little details that the previous owners did, then tried to pass this off....

I suppose it makes some sense, since the new president is a white guy with a Jheri Curl. I think that’s what JC stands for.
N

I ended up buying one of these (the V) from Samash in June. They had a whopping one in stock at a different store. I love it. Playability is definitely better than the cheaper Gibsons I've played. I've played one of the $6500 '59 reissues, and I think the fretwork on my V is just as good as that guitar. It came setup with 10s, with nearly zero neck relief and very low action. I swapped over to 9s and raised the action a bit. No matter how great the fretwork is, with the action that low you buzz big time when you get heavy with your right hand. And it's a white V, so you've got to dig into the Balls to the Wall riff at least once every time you pick it up .

The biggest surprise to me is actually the pickups. They're hot (mine measure ~14k DC resistance on the bridge and ~15 k DC resistance on the neck, gotta love that hand-wound inconsistency), but they've got a really pleasant tone. Not sure how exactly to describe it, but it seems like they're pulling in frequencies that normally get attenuated in high output humbuckers (I've got another V with a Bill Lawrence L-500XL in the bridge), almost like a single coil. I can't seem to find any information to validate it, but I'm guessing this is the "unbalanced" coil approach to humbuckers. They're not 4-conductor, so I have no way to verify it just by looking at my guitar.

I will say though, I learned a lot about Gibson here, as a first time Gibson buyer. Make no mistake, my guitar plays and sounds amazing. However, there were some pretty serious QC issues with it. There are a couple finish blemishes (small spot of dust under clear coat on the neck, hairline finish crack along neck joint), and I noticed when taking off the cellophane on the pickguard (which, by the way, is a royal pain, you have to take the knobs, pickup rings, etc off to get it all) that there was a hump in the pickguard. I initially thought the pickguard was warped, but I took it off, and it turns out that the cable for the neck pickup was not installed in its channel! It was sitting pinched between the body and the pickguard.

Samash agreed to give me a full refund on the guitar, or exchange for something of similar price. No chance on getting another one of this model. I still don't seem them in stock anywhere, almost 6 months later. I opted to keep it. It does the stuff that matters really well. I just wanted to outline this stuff because it really alarmed and upset me, at first, that my $2000 guitar had these kinds of issues. I searched around, and basically just came to terms with the fact that this comes with the territory when you dabble in things that are made the same way they were 50 years ago, e.g. hand assembly, nitrocellulose lacquer finishes. I can almost guarantee the American Original strats, with their nitro finishes, have examples with the same kinds of issues.

I'd much rather have the Dean USA Custom Shop Korina Z and V that I used to have but sold because I never played them. I did keep my '81 Z. It has the best neck of any guitar I've ever played. The Gibsons I've tried really didn't compare. 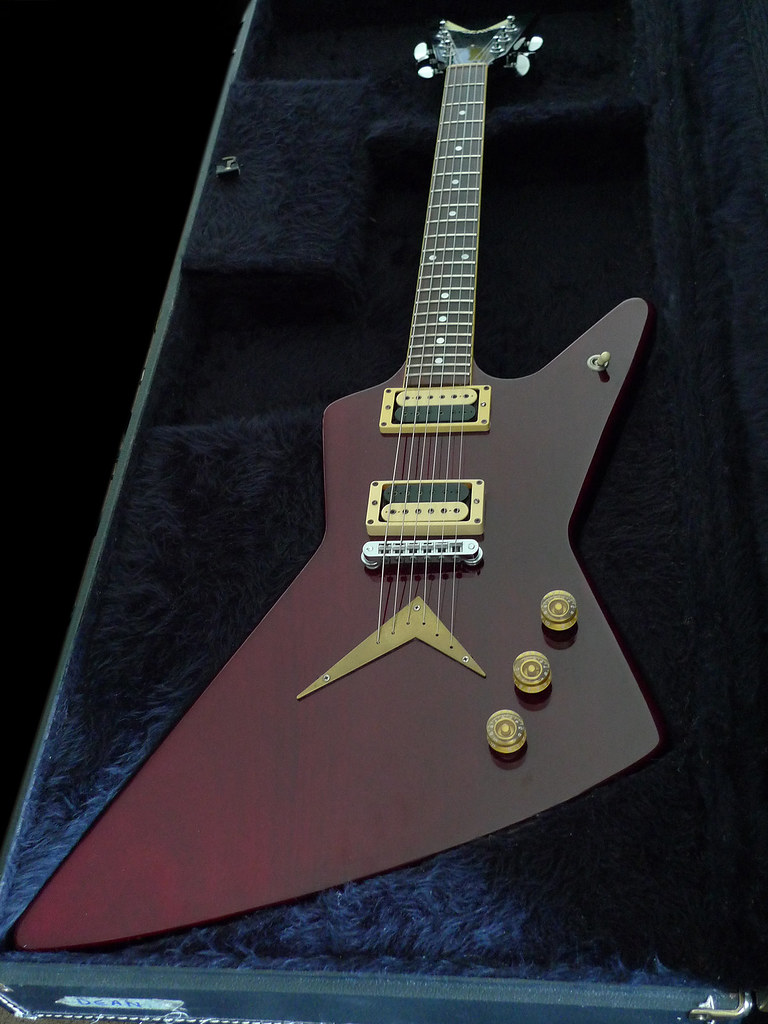 I have to agree that these probably aren't in the same realm as that Dean USA custom shop V (though I've never played one of those so who knows? Beautiful guitar though). However, the picture did remind me of something.

Yes, these new Gibson 70s Vs _are_ full sized Vs. The goofy looking, half pickguard model they've been making for the last 5 years or so actually has a thinner and smaller body, in addition to the weird pickguard. You can immediately tell the difference between the two when you play them sitting down.
You must log in or register to reply here.
Share:
Facebook Twitter Reddit Pinterest Tumblr WhatsApp Email Link