I don’t Condone buying guitars sight unseen. In contradictory fashion, every single guitar I’ve ever bought was sight unseen. Sometimes you find gems, sometimes you realize that quality doesn’t mean that it fits the individual player.
I was on a deployment and hit a point where I told myself I was ready to put all my chips in one basket and get a guitar that was what I wanted, to a T. I did some searching, but found that many custom shops are primarily option shops. That’s fine, so long as the options were what I needed. So I decided to email the guys at Suhr about a guitar. They were super
Cool, and we’re very helpful in helping me out. Great group of people. At one point John Suhr have a suggestion about a wood type I wasn’t as familiar with in conjunction with the combination of details and woods I was using and sound I was going for. I decided to take his word, and he was absolutely correct.
I had to have been an annoying customer, but if I was, they treated me wonderfully regardless. I even requested strange and specific things, like ‘Solid Pau Ferro neck with all grain from the heel to the tip of the headstock in a single and straight direction. Here’s what I got.

I asked for a waterfall Burl in faded Trans Green with no SOLID black around the edges, and a wide patterned Burl and without so many divots are dark circles (So certain colors I was contemplating wouldnt brown so much) here’s what I got.
(Picture darkened some black, it more transparent in person)

We talked pickups and magnets, and I realized quickly
That they are no joke and have served me better than any other pickup IVe ever used, and Ive been through all the builders. This is not saying anything negative about anyone, but what I spoke about needing they accomplished perfectly.

Maybe it was coincidence, but a relative date of when I would return to the United States came up, and that guitar arrived 3 days before I was home.

So I get home, I go to storage and unpack my old Boogie, plug it in and opened the case. I was mesmerized, and probably looked for about 2 minutes before I really picked it up. When I did I strummed a G chord and it was perfectly in tune. I then Played the same chord with the same shape and octave up, and that chord at the 15th fret with open D and G was perfectly in tune. Intonation was perfect.
I’m typically a too much gain and pointless noodling player, but found myself on the clean channel forever, and then on a mid gain setting in the neck split position. The most beautiful and dynamic tone and guitar Ive ever played. Nuances that I always aspired to find were layered in front of me, I had uncovered a tonal treasure that glistened in harmonic gold, where every note was a musical endeavor that became everything I needed that single note to be. I had never owned something that could James Brown, Andy Timmons, and John Petrucci all in one. I asked for a guitar very specific, and there were messages back and forth for weeks/month describing tone in detail so minor and accurate,
So descriptive and specific, and it arrived exact. Ever plug into a Dumble style amp, or vintage Boogie or Fender and even the clean sings like Vintage Mariah or Whitney? That’s how this guitar is, cleans sustain.
I switched to the gain channel and instantly found home. But home wasn’t a small house just somewhere. Home was a world, a universe, a realm of tonal and harmonic capacity far exceeding prior knowledge and my mind because a puppeteer, the very soul and detail of every note was a mirror of what I heard within myself. When I wanted a difficult harmonic at the 11th fret on G, it happened, when I wanted a pinch harmonic at the 19th fret it happened. When I wanted to Gilmour Bend 2 steps and come back to a flawlessly intonated guitar, it happened. Things that were choppy and impossible before suddenly became fluid like someone melted real butter on a fine southern biscuit and changed your mind on what you thought a biscuit should be. There was a smoothness to each note and this guitar will not get harsh or dry, it is always a slick, intricately smooth And dynamic path to being able to hear your dreams and emotions, a packed theater for my personal preferences. Articulate and accurate, but always warm and full of Heart and Soul like an Otis Redding album. I asked for a guitar that was finally me, and this is what I got.

Hard to beat a Suhr.

What pickups are in it?

You've got the skills to wield this fire breathing beast of a guitar. Suhr makes some amazing instruments.

derekd said:
Hard to beat a Suhr.
Click to expand...

Truly is. Fit and finish, quality, attention to detail, playability, and tone are absolute top tier.

9fingers said:
What pickups are in it?
Click to expand...

They are JSR, John Suhr Reserves. They’re like nothing else!

But also they call them DSH+, double pole and smooooooth, but not ‘lost in a mix’ dark. Incredible. Neck is DSV. However, this particular DSH+ has a unique magnet gauss attribute.

Good god! Beautiful! They are hard to beat! Their pickups, too, just compliment their instruments like nothing else.

PSLUAN said:
You've got the skills to wield this fire breathing beast of a guitar. Suhr makes some amazing instruments.
Click to expand...

Thank you, I have almost lost interest in other guitars....except a second Suhr!!’

I am not at all a fan of the Suhr guitars but that one is definitely special for you and it looks and sounds great! If you ever sell it, I’m sending you a mallet to hit yourself over the head.

PBGas said:
I am not at all a fan of the Suhr guitars but that one is definitely special for you and it looks and sounds great! If you ever sell it, I’m sending you a mallet to hit yourself over the head.
Click to expand...

Hahaha, DEAL! Ya know, the beauty of life and guitars is that people
Don’t always like the same
Things. This give us all unique and individual voices and choices! What’s your guitar of choice?
B

I had a similar experience when I got my PRS CU22. I wanted a custom order, with specific specs. I wanted Santana Orange, 10 top, super depth in the flame, trem, wide thin, MOP birds, McCarty pups and electronics. Local PRS dealer had gotten burned by another buyer on a custom order, so he was not gonna do it. Wait time was 12-18 months, and he had just had a bad experience with another customer who custom ordered 2 guitars, didn't buy either. I know shop owner, we are friends to this day. But, he said no, and I understood.
Searching ebay one night, I see a guitar with exactly my specs. I bid, and it ended with no one meeting reserve. I was highest bidder. Owner contacted me, which I thought was fishy, but he owned FigTree music in Lafayette, LA. We agreed on price, I bought it, he shipped it. When I opened the case, like you, I just stared. I was stunned at the beauty. Then I played it. I was lost in a muscial universe, like you. Then I plugged it in and it sang! Again, like you, I found myself playing things that seemed to just flow out of me.
But, I had a similar experience this year when I got my first Suhr. I have a korina limited. I was stunned by its beauty, feel, and tones. I've been lucky to have two guitars that gave me the same experience. Reading your post took me a thousand miles away in my mind, to those moments. I gotta go play both, now. I will take pictures and share.
Thanks for sharing your beautiful story. It's much needed in these trying times. 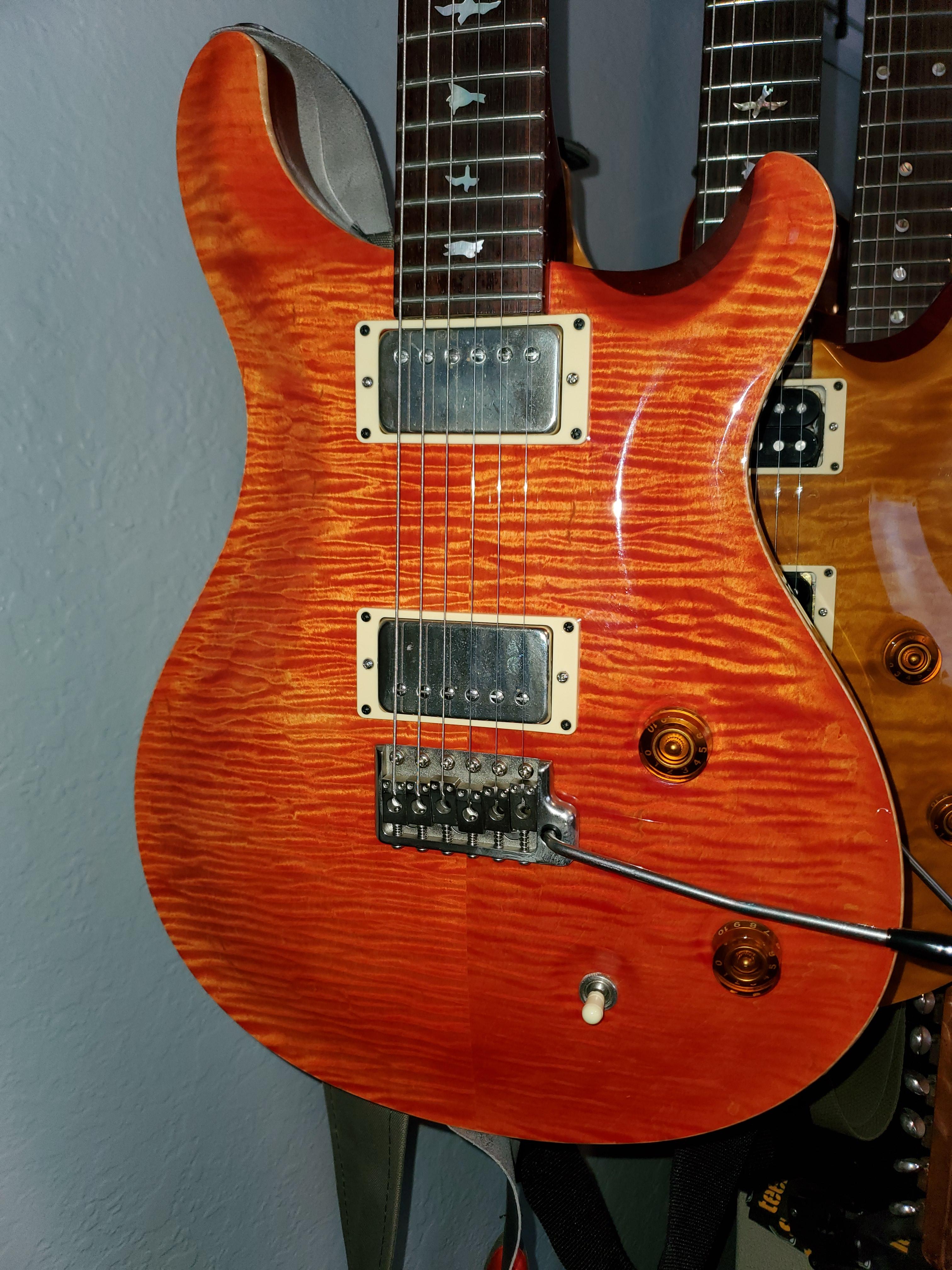 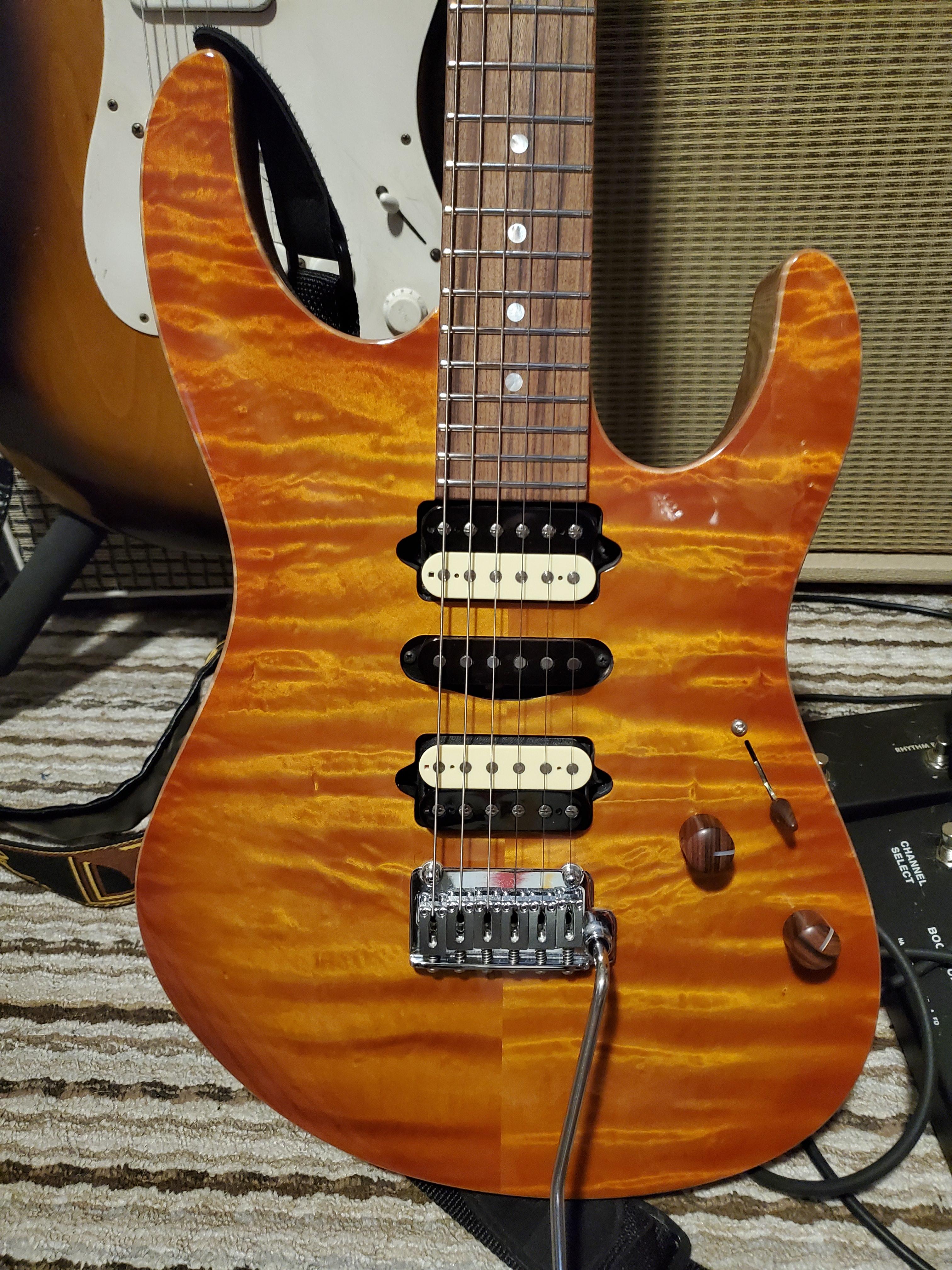 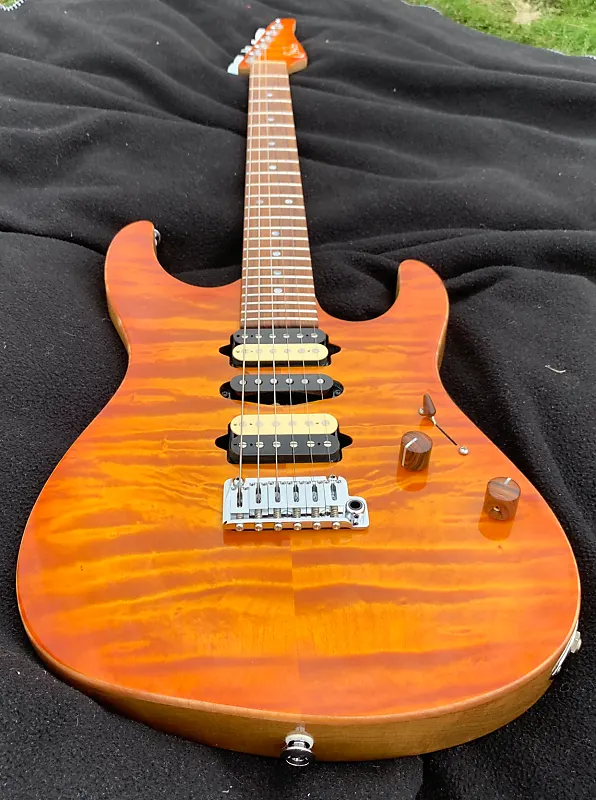 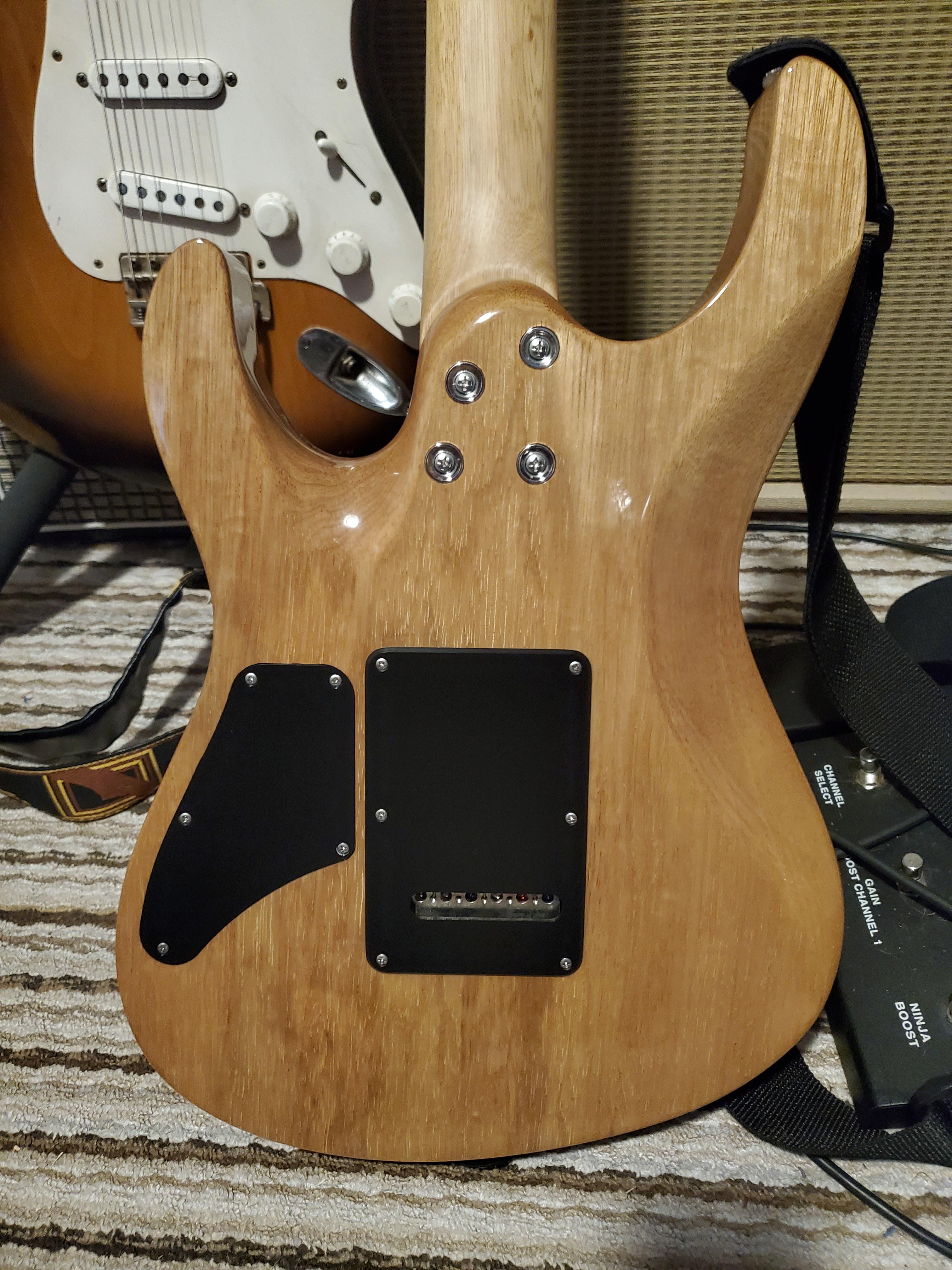 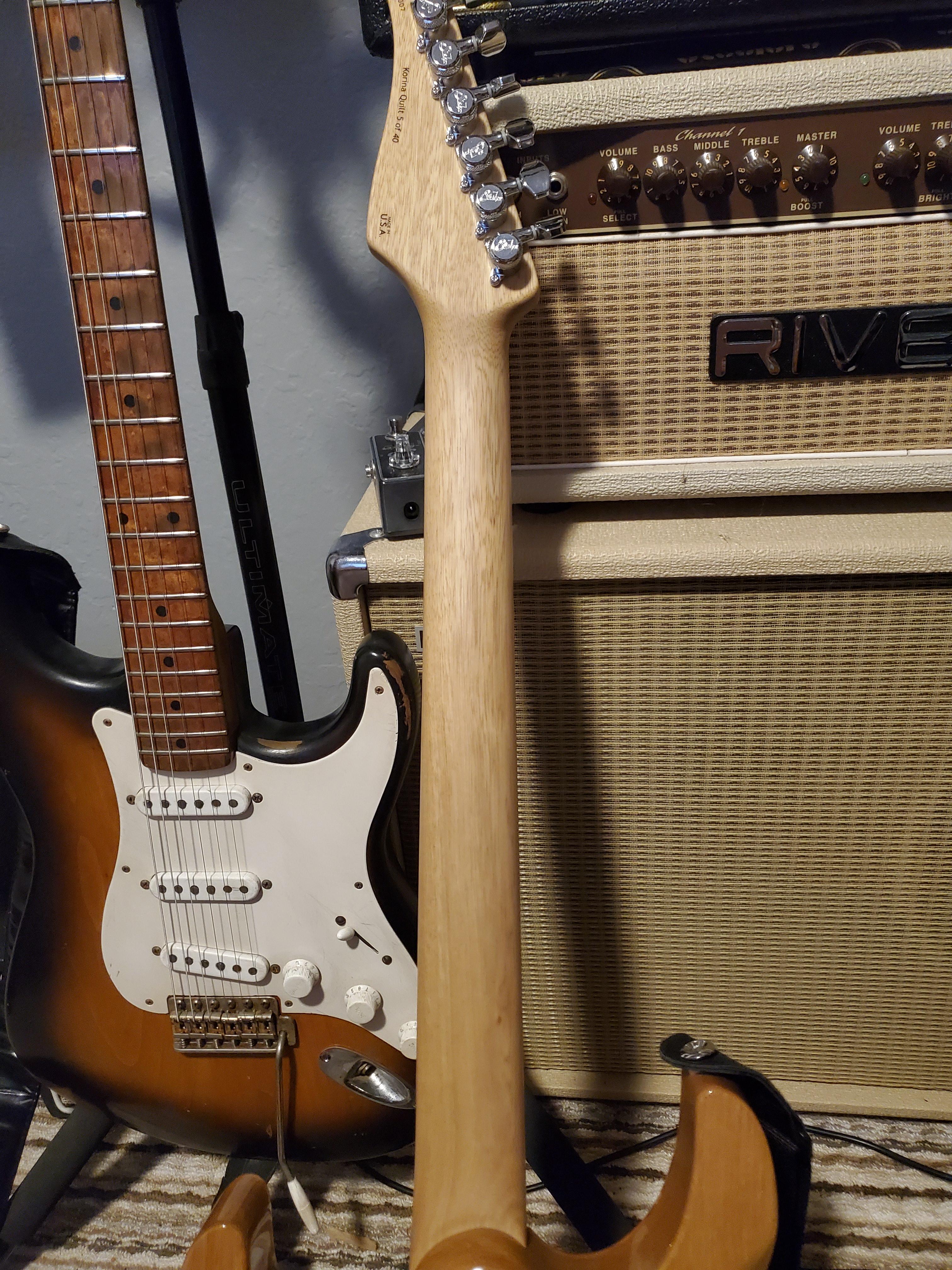 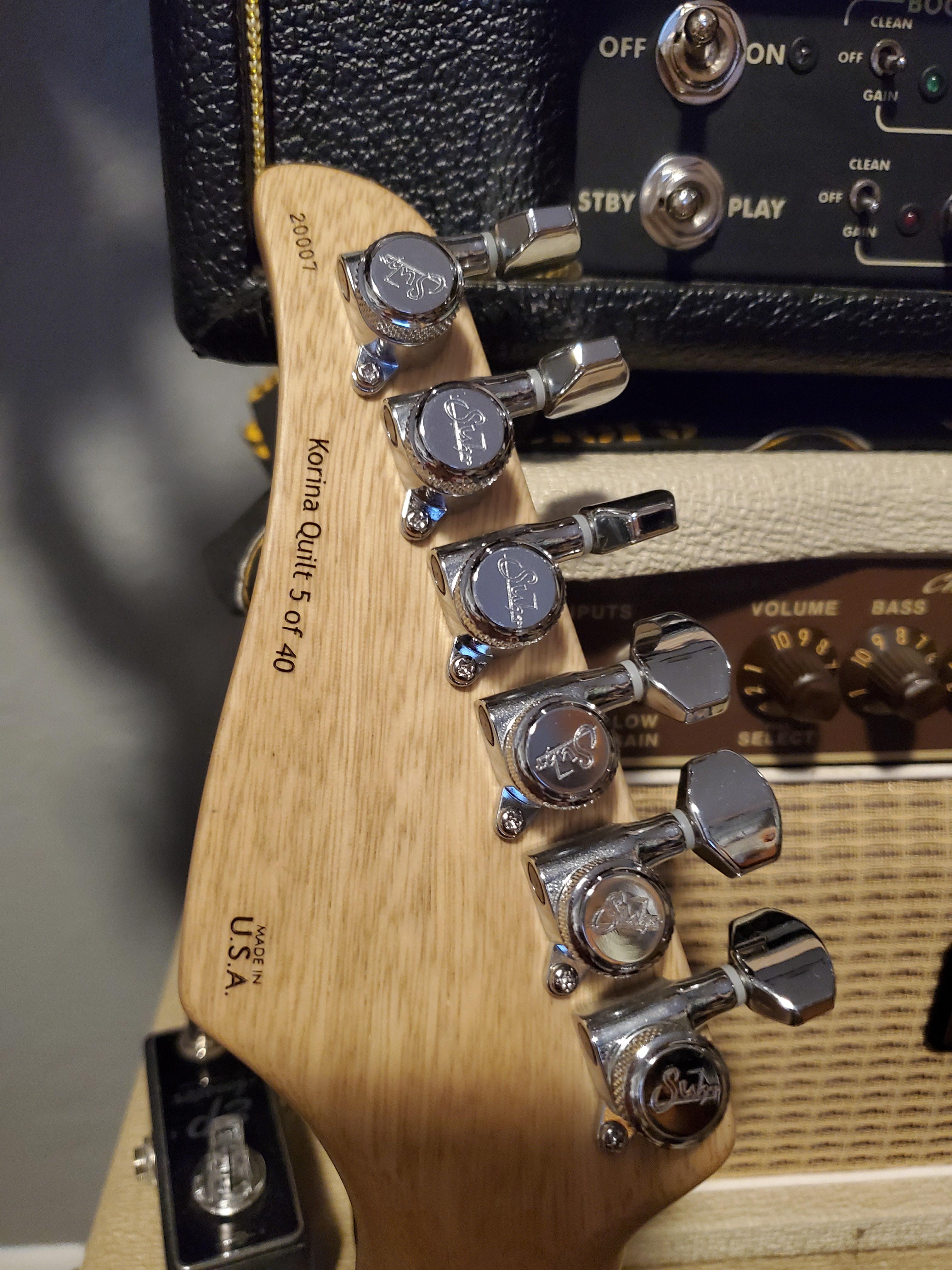 The pups are SSH+ bridge, SSV neck, and ML middle. Don't know what that all means, but that's what's on the spec sheet. Whatever they are, they sound glorious and cover everything, like yours.

fatbagg said:
Hahaha, DEAL! Ya know, the beauty of life and guitars is that people
Don’t always like the same
Things. This give us all unique and individual voices and choices! What’s your guitar of choice?
Click to expand...

I have 3 custom Fender CS guitars and one master built one. I've sold off all of my J Customs and three Jams over the past 10 years and just paired everything down to only 4 guitars. It took me the last 5 years to get each one of them. A friend at Fender CS helped me out with 2 of them which took about a year to get.
B

I've had my Modern for a similar time as yours and agree that they are great. Mine was off the shelf, so very impressed with the detail they responded to you with re woods etc etc.

I ordered a Suhr myself not so long ago (Classic T). It's reassuring to read about lasting love like this. Thanks!
P

I wonder what the wood combinations are. Would you mind sharing the spec? I'm thinking about getting one like yours.

Basswood with Waterfall Burl. I’ve always been an LP tone guy, mahogany body and such, and talked with John about what I wanted tone wise and we got to this, and damn it sounds massive. Better than my other mahogany guitars!

nexk is a solid Pau Ferro.

I always liked the Modern body shape, it has just enough offset to it to not look like what we know of as hot rod strats. Your has a cool neck too!