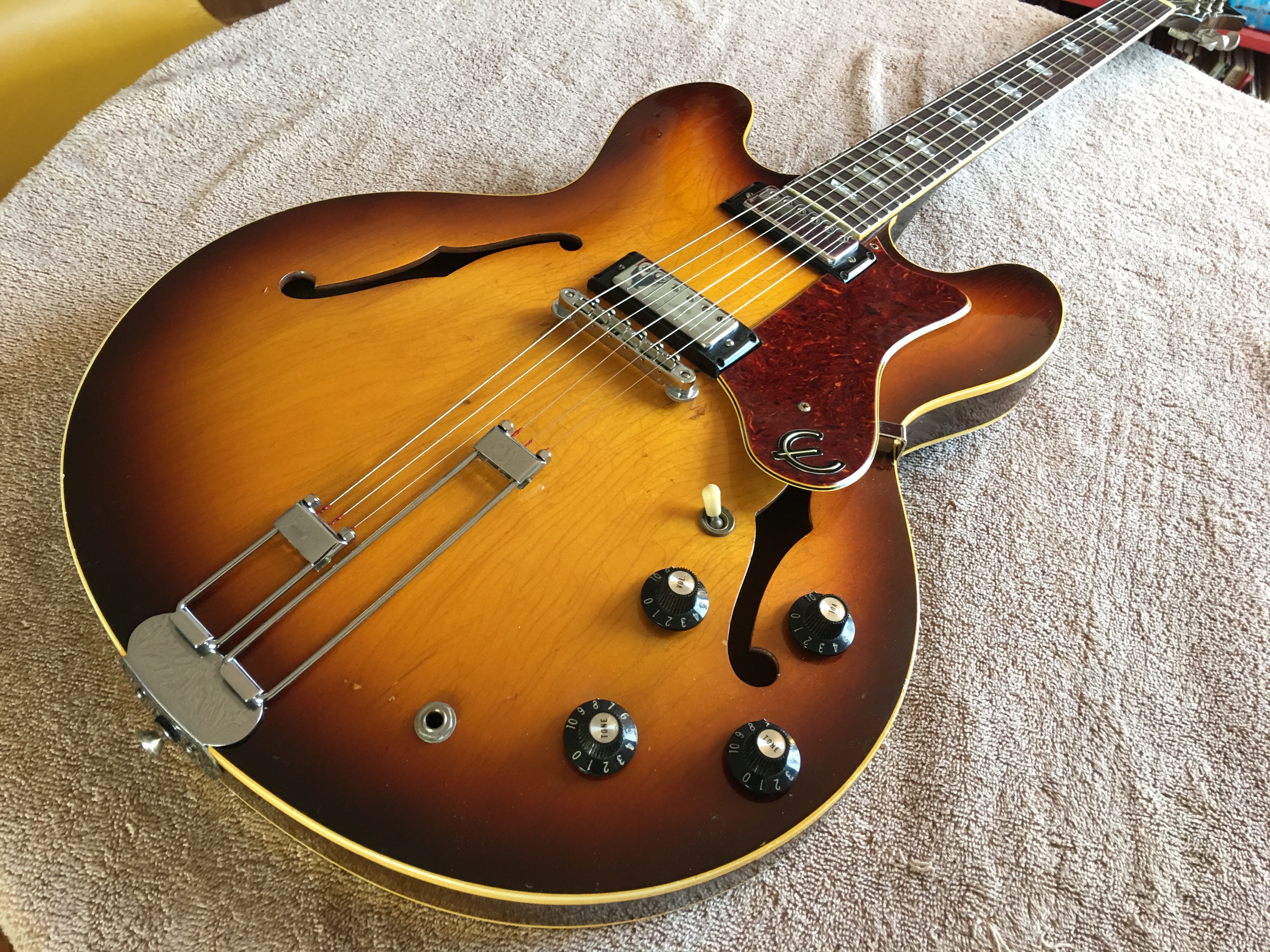 I rescued this guitar from the Guitar Center in New Orleans a few years back; when I found it the guitar had a deep nicotine patina, the frets were played down to the Brazilian rosewood fingerboard, and it had a missing pickguard, a bent tuning key, a dent in the bridge pickup cover along with a crack in the typically skinny neck from that era. It looked like it was a played until it wouldn't play any more and then it took a fall, and that's how it came to me.

In spite of that I could get it into tune and what I could get out of it sounded like a Magic Sam record; it's a sweet guitar that was played down to the ground for a reason. I did a deal for the guitar and took it to the brilliant Benjamin Strange at Strange Guitar Works in NOLA, and he fixed the neck crack, refretted it with period-correct fretwire and straightened out the bridge and cut a new bone nut for the old girl.

It's a great sounding guitar -- if you know Robben Ford's "Bringing It Back Home" CD or have seen the YouTube video of Otis Rush playing "I Can't Quit You Baby" in Berlin in '66 you know already know what this guitar sounds like. Other than the strap buttons and the pickguard the guitar is original; it's an aged repro in tortoise just cause I like it better the stock white guard. The bridge pickup has gone microphonic, but unless you're a high gain player that's a good thing and the guitar is stable, holds tune well and plays great.

She weighs 8 pounds on the button, the neck is a little wider than the usual 1 9/16th found at the time, it measures 1 5/8th inch at the nut. Neck depth at the first fret is right at .8", and grows to 1" at the 12th fret -- it starts to get wider and deeper right around the 5th fret so the only place it's a little crowded is down where the cowboy chords are. I found it easy to get used to, FWIW, and like the way it plays.

As noted the neck cracked behind the second fret, and Ben's repair has been rock solid. The guitar plays nicely with low action and notes ring out up and down the neck without dead spots. The cosmetic repair wasn't great, Ben didn't really want to mess with it and I never got around to getting a pro refinisher to touch it up.

So bid with confidence -- the guitar is coming up on it's 50th anniversary and shows all the tell-tale signs of having lived a hard life but of having been loved along the way. I've had her for 3 years now, and she's ready to play for 50 more. The guitar ships in the original Epiphone case, and will be very well packed.


Let me know if you have any questions or want to see any additional pictures, will be glad to help.

Thanks for your interest!
D