I would love to see some pics of some of your tele deluxes. Also what type of amps/effects are you using with it and what type of music are you playing?
B

I have a reissue so im not sure if that counts. I love the guitar. From the old ones ive played, it may be put together better than the originals. The only thing missing is the sweet pickups that were in the originals. I play mostly hard rock with mine. Great solid guitar.

I have an original '78 and have had success playing it through a bunch of different amps.

It sounds great through a Mesa DR, Bedrock BC75, THD Bivalve, and an Ampeg Gemini VI. When it was my primary guitar, I didn't really used any effects other than a Boss CS-3 compressor.

Hey, I've had my eye on these recently... never having played a Tele (I'm a dyed-in-the-wool Les Paul player) I'd like to know - would this Tele be similar tonally to say a Les Paul with mini-humbuckers? From what I hear sounds like it would (thinner/brighter).
P

I love to play my Reissue though a Vox. I really like the 12 degree radius and med jumbo frets on the modern necks too!

I have both vintage 70's and new Wide-Range humbuckers and I find the new reissues in the Tele Deluxe sound great. I believe the reissues are wired stock with 250K pots now though, which is a big change over the traditional 1meg pots and I believe it sweetens them out a tad.
M

its nice but i took a little tweaking to make sing (lots of action and pickup adjusting).

but as far as fenders go they have pretty much everything i love about various fenders in one guitar.
S

It came to me with a Tele Custom set up and I had it restored though it was still very battered when I sold it.

Here's my 'lawsuit' CSL version that I recently sold...

It had a real 1973 Seth Love humbucker in the neck that I took out before I sold it and it going in another Tele soon.

I owned a reissue one but didn't like it at all. Too much lacquer and the neck felt weird.

And finally, here's my 1973 that I wouldn't part with for the world. I think I'll get someone to bury me with it. 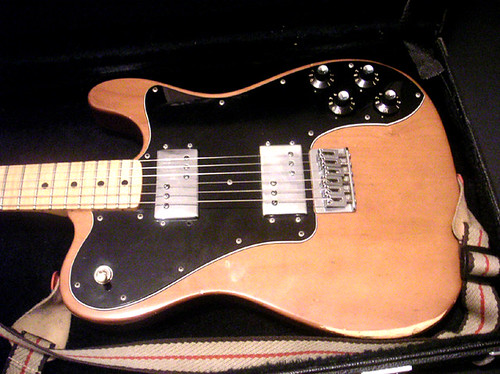 I make lots of music with it but it's probably been most integral to one band I do thats heavy, bass-playerless 3 piece kind of Captain Beefheart/ZZ Top stuff. But I use it for everything.

fast ricky love said:
What's a good one of these to buy if I don't want to spend big bucks for a '72...? Sonically as good? Alder body?
Click to expand...


I'd say get a nice 80s Japanese Tele of some persuasion and buy an original Seth Love pickup and put it in the neck. The pickup will be $$$ but it's worth it.

Thanks guys. Also, I don't care if you have an original or a reissue. I'm actually leaning towards getting a reissue anyways. Mainly due to price. Lets see some more pics.

In my experience, the reissues are a different beast than the originals. Alll of the reissues I have played are VERY light, whereas the originals (mine anyway) are really heavy. That's not to say the reissue won't sound good, it's just not likely to sound the same for the previously mentioned new pot values and the different magnet type in the reissue pickups.
S

the recluse said:
In my experience, the reissues are a different beast than the originals. Alll of the reissues I have played are VERY light, whereas the originals (mine anyway) are really heavy. That's not to say the reissue won't sound good, it's just not likely to sound the same for the previously mentioned new pot values and the different magnet type in the reissue pickups.
Click to expand...


Really? My 73 weighs next to nothing. It has really nice wood on the neck though, very flamey, and the body has lost some of the paint in places so it's possible it's dried out, as they say, and lost some of the density of the ones with a solid colour finish. My friend has a black 78 and it weighs the same as a Volkswagen so I guess they vary pretty wildly. Both Mocha Brown ones I have owned have been featherweight.
B

Im about to change my pots out to 500k pots. Anyone have anything good or bad to say about this change. I heard this will get me a bit closer to the original sound. Im on the fence about the tuners. They arent that great, but I like the way they look. Anyone know some higher quality ones that will be direct replacements?
T

bluestarbass said:
Im about to change my pots out to 500k pots. Anyone have anything good or bad to say about this change. I heard this will get me a bit closer to the original sound. Im on the fence about the tuners. They arent that great, but I like the way they look. Anyone know some higher quality ones that will be direct replacements?
Click to expand...


I liked what it did to mine. My friend has an original that i've played a few times- changing the pots really doesn't do much for getting you that CuNico (sp?) sound. On mine the guitar opened up a bit, and the mud went away. The pickups basically sound brighter and fuller. I never used the neck pickup before the change- i do now. It's definitely worth the time to do it.

I own a reissue and am very happy with it. Very sweet sounding. These wide-range humbuckers aren't wax-potted are they? Mine is a little more prone to feedback than my LP.
8

Wish I had the bread for one with Seth's in it.

For what it is, and what it costs, it's not a bad guitar at all.

Mine stays in tune really well, sounds pretty good in most situations.

Looks cool too, I just wish the neck was a little more tinted.

I use it at my go to bang around guitar, or if I'm tired of hearing my firebird or jaguar.

I've only had my MIM reissue '72 Tele Deluxe for a month or so, but I've already found a number of clean and distorted tones that just kill. It's great little guitar for not a huge amount of cash. Mine's an FSR in shoreline gold. Nice and light.

I may experiment with tone pot values a bit just to see what it sounds like brightened up a tad; but I love it the way it is. I was just curious about these at first; but when I plugged this one into a little Koch studio amp at a local shop, out came this gorgeous tone that seemed to be a hybrid of Gibson and Fender.

It's kind of like the "Edsel" of Fenders, seems to me. Functionally a valid design; aesthetically - what the hell were they thinking? It just looks wrong. But I love that about it, too.

Mines a '74 Custom but I love this thing.

I preferred the custom as I like that nice signature tele twang in the bridge. The middle position is one of the coolest settings of all my guitars.

I'd like to get a Deluxe at some point but these might have become to pricey by the time I am able to.