A way to keep pedal knobs from moving

Recently decided to find a way to keep the knobs from moving when you happen to drag the cord across the top of them. 1/8th inch thick x 9/16 diameter rubber O rings thickness may very on some pedals. Cut them and stuff them underworks great. I left a couple hanging out a bit to show they go under nice can't see them.

Digitech has a clever solution for this problem: a rubber "boot" with exactly sized holes to keep the knobs from moving. It comes with their pedals (at least the two that I have). 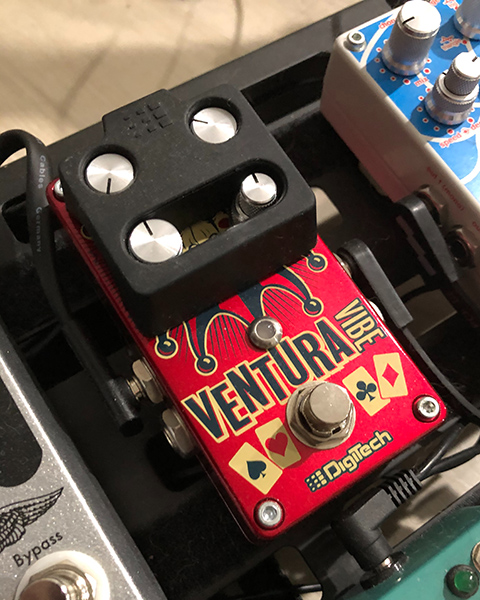 A friend of mine just puts tape over the knobs.

Take the knobs off first. No cutting required:

Speaking of Digitech, I had a hell of a time with the Whammy V bumping the knob with my foot. Tried everything as far as covering it so it wouldn’t get bumped and change the setting which is disastrous during a bitchin’ Morello solo. Finally put an MXR knob on there which is shorter. It screws on which worries me since I think it’s a plastic shaft but no problems
Since. I think it’s smaller than the big phase 90 one. Searched and I seem to be the only one with that problem which blows my mind since I hit it every single time without fail.
B

mrpinter said:
Digitech has a clever solution for this problem: a rubber "boot" with exactly sized holes to keep the knobs from moving. It comes with their pedals (at least the two that I have).

I wonder if you could just cut the end off an egg container and tape it on. Some of them are made of clear plastic. You could even take both ends, tape them together and make it stronger and a more complete coverage.
P

Duct tape. Also good on gigs when too much people mess around on stage during setup, and you don't see that someone knocked one of your volumes on the pedals to full.

Tape.
I was just watching this vid yesterday (go at 9:15)