I'd like to work on some keyboard stuff and need advice on gear. I currently have an antique Kawai K1 synth and an old Korg digital piano (SP250). The Korg has a number of non-working keys. I have in the past been able to get my Kawai to connect to my Mac using a MIDI to USB converter, but its been awhile, and as I remember wasn't too slick. I'd like to have a keyboard mostly for input into Logic for creating tunes, but also to practice learning keyboard better and rarely playing with a band. I've been considering getting a cheap MIDI controller for this, and would plan to use it with an iPad running inexpensive synth apps for live use. I have a couple of questions hopefully someone can answer. First, for live use is there much latency in using a MIDI controller with iPad apps? I'd also often be using the iPad to adjust my PA mixer. For the uses I want should this be a good approach or would you recommend another plan? Would it be better to find some type of interface to use the Kawai rather than buying a newer MIDI controller? I'm thinking if I ever get time I'll try to tear into the Korg to repair it guided by some YouTube videos, but would gladly pay someone to fix it for a reasonable fee - how would I find someone able to do that? Its a big item and I really don't want to ship it anywhere. Should I just sell or donate both keyboards and get a workstation or something? Live I'd probably want to use some string and horn sounds, piano and organ mostly, but might end up playing around with some Ableton Live stuff as well. I'd rather not spend all that much, but want stuff that will do the job well and can go up in price some if I need to.
J

I can't answer your iPad question as I'm not an Apple guy.

I use an Edirol PCR-500. So far it does everything I want it to do. It's old now so I'm sure there are more up-to-date versions. But it has MIDI connections on board as well as plain ol' USB. There is no latency and I've used it before triggering the Akai S3000 live with no problems.

As for the Korg SP250, a used one goes for £400 in the UK after a quick Google around. If you like the sounds it makes, it could be worth restoring it and then deciding whether you sell it on or not. If pure piano is in your future, I can fully recommend the Casio Privia series. Alternatively, if you want to save space and time, hunt down a MIDI controller with fully weighted keys and use a VST?

Wow, a lot to take in, and a lot to discuss.

Here's what I would do:

Live, I'd rather have a Synth that has its own internal sounds. It's 1 piece of gear.

If you use a Controller, you have to control something - so you'll need the keyboard and stand and the same kind of stage footprint, but you'll also have to deal with the iPad and connections, and picking the sounds and all that stuff - same if you brought out a computer. More stuff to go wrong, get damaged, etc.

Most any modern synth that would have all those string and horn sounds as well as an abundance of keyboard sounds will also be compatible with DAWs and iPad anyway, so you CAN use them as a controller to control sounds in and record to Logic, but you have the advantage of using it "standalone" at gigs and to record sounds from it into Logic.

You could even get a somewhat inexpensive Yamaha PSR type keyboard - they have the same sounds their flagship synths do - just fewer of them and less ability to edit them - btut if you're just calling up sounds you pick the best one and go.

So you get the best of both worlds - has it's own sounds, which you can use Live, or record as audio into Logic, and can act as a controller for Logic and. And IF you wanted you could STILL use it as a controller live with iPad etc.

A Controller takes that ability to perform live with just that single unit.

I would look at a Yamaha MX61, or a Roland DS61, or some "rompler" keyboard similar to that - they have tons of sounds and are designed for this stuff.

If cost is an issue, check into the Yamaha PSR stuff.

BTW, there's a Software Instrument (AU) version of the K1: 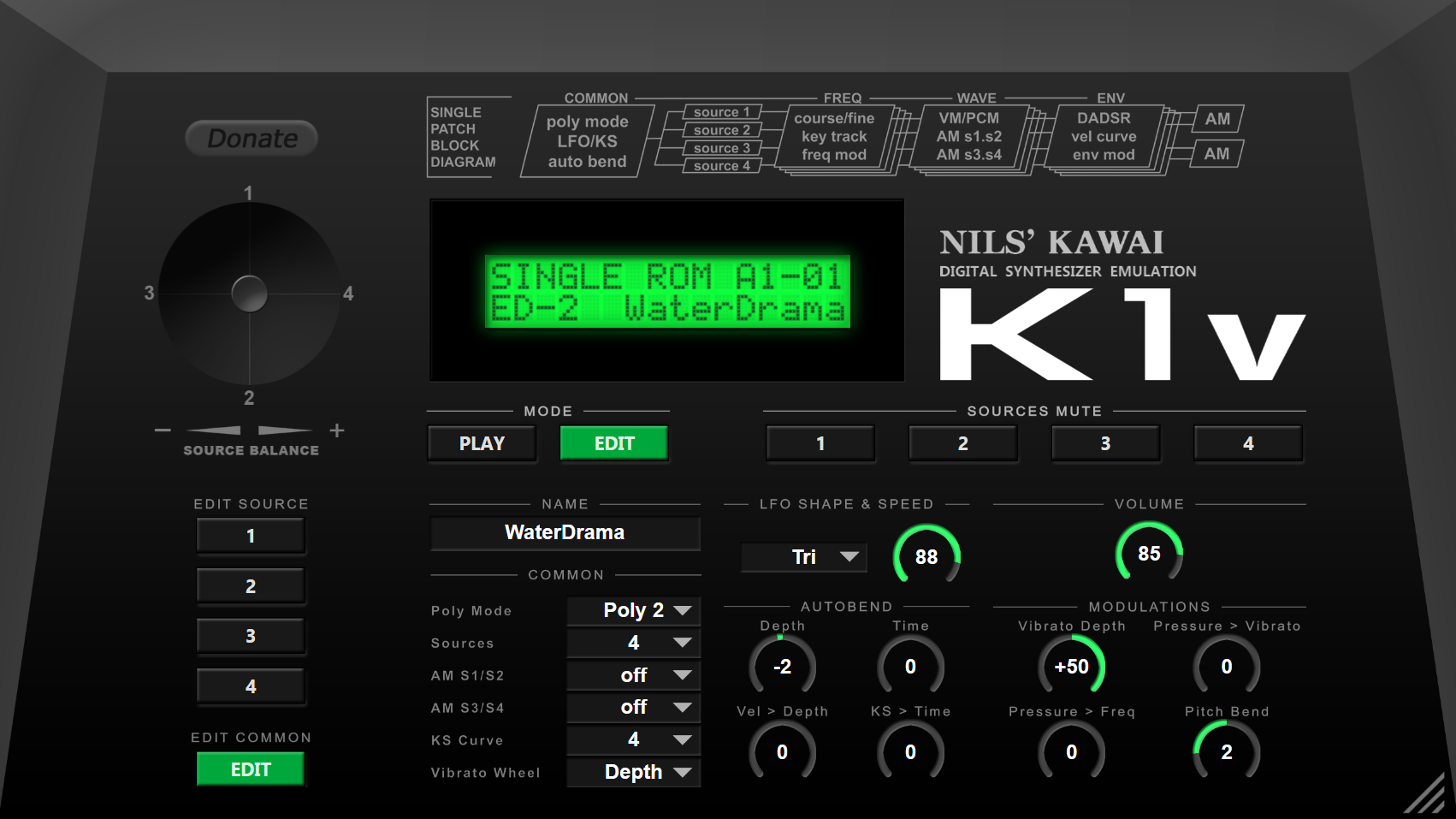 Nils' K1v is a classic rompler that emulates the Kawai K1, a famous japanese classic from 1988. Features: Very accurate emulation of all pa...

If you need a lot of "control" in the studio and live - like knobs, faders, buttons, and so on you can assign to stuff, then a Controller would make more sense (and be cheaper) but that would kind of force you into using it with a Computer/iPad live, but give you the advantage of more controllable elements in the studio - but you have to learn how to assign them....
You must log in or register to reply here.
Share:
Facebook Twitter Reddit Pinterest Tumblr WhatsApp Email Link