Am I the only one who prefers the batwing guard..

You are probably in the minority. I don’t mind the batwing but given the choice, small pickguard everytime

No, you're not alone! I always look for a batwing over a small guard. They just look cooler to me.

I much prefer the batwing over the small guard! Depends on the color for me. If it's pellham blue then I prefer the smaller one for sure.

I ilke the look of the small guard better but I prefer the neck joint and (usually) the neck shape of the big guard Standard, and those factors are more important than styling.

I’m in the batwing camp as well.

batwing all the way!

I prefer the large guard but didn't know it was referred to as the "bat wing". The small guard also looks like some kind of a wing to me. Perhaps a chicken? My least favorite is the SG wingless.

Windup 43 said:
I much prefer the batwing over the small guard!

Nice! I prefer the small guard but have a weakness for white SGs.

I really miss this one. 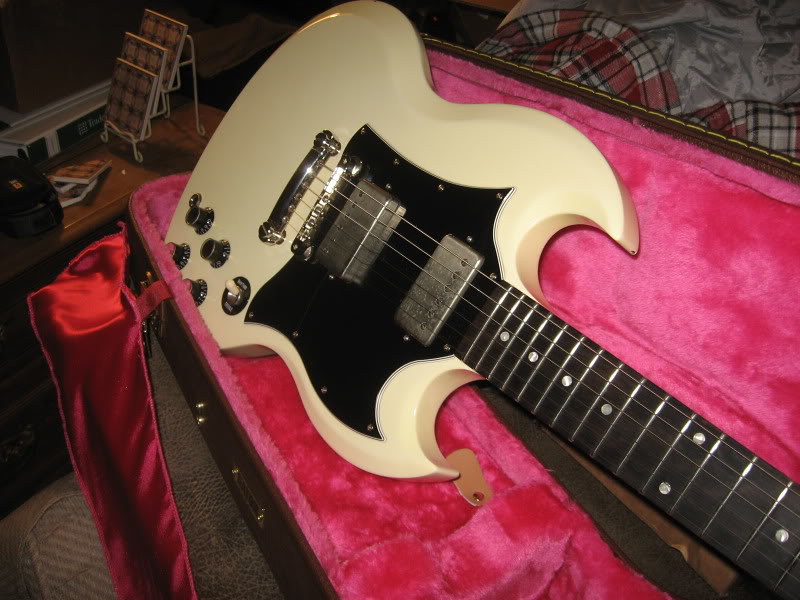 Are the large guard guitars routed differently under the pickguard than the small guard versions?

I prefer the small guard and I've always felt I'm in the minority.

The trend is whatever Gibson is currently making is the one people DON’T like.
8

detroiter711 said:
Are the large guard guitars routed differently under the pickguard than the small guard versions?
Click to expand...

I didn't even know SGs came with different size pickguards for a long time. My SG Special was my primary guitar for years. All I know is after needing a more legit guitar over my 90s Danelectro 56 U2 reissue, I walked into Guitar Center, played it, then decided I was going to buy it, on credit (ha...). It has a full-face pickguard and snot green tuners and teal flip-flip finish. Also it's a funky color.

Did I know the history of who played SGs, what the "originals" looked like, etc? Nope. I think I might have known Angus Young played them.

But eventually because of the internet I was aware of the small guards and I don't like them. Especially with nickel/chrome tuners.

I was on the hunt for a Pelham Blue Standard for a long time. I finally managed to find a used one off the Sam Ash run with the snot tuners and full pickguard and larger neck (which my Special also had). I saw those ones a couple years ago Gibson had that had the Grovers and small pickguard. Nope.

But I'm willing to bet that had I bought a small pickguard version with grovers I'd think the large with snot green was weird.