Any love for older Tone King amps like Comet?

So was the Comet any good or just sort of so-so?

You think if it was great, they would keep it in production.

Webfoot said:
You think if it was great, they would keep it in production.
Click to expand...

I played one at the Dallas Show in '02 and thought it was one of the most amazing amps I had ever played.
Definition and dynamics were awesome.
If I had not been looking for an R8 I would have jumped on it and regret not doing so.

There were 20 & 40 watt versions.
The Dealer told me that many that bought the 40 watter later wanted the 20 watter.
It was like a Tweed Deluxe with greater clarity.

That was the version I played.

There was quite a crowd around the booth as everyone wanted to play through it after they heard it.
S

I own a Comet 20 (it was the amp Guitar Player reviewed and I got it from a great guy on this forum for a great price). Comets sometimes can be found at prices well below Meteors etc. They are a great blackface deluxe and a useful tweed channel. Some folks don't like the tweed channel but i do. Nice reverb and a very 3D rocky /blues tone. Very light amp to carry too.

I have thought before that the Comet qualifies as "the only amp you'll ever need".
G

Webfoot said:
So was the Comet any good or just sort of so-so?

You think if it was great, they would keep it in production.
Click to expand...

Since Tone King is mainly a one-man show i'd have to imagine that he can't offer a variety of amps and still keep up with demand. As it is, there's a relatively long wait to get a new one. I should know.... i'm eagerly awaiting a new Metro.

The Comet 40B was my main amp for six years. That's an eternity in amp years.

It ranks as among the finest amps I have ever played: PURE blackface cleans and a raucous tweed that is foot switchable to half power; the best of both worlds.
S

As to why Tone King no longer makes Comets? Tone King is (as far as I can tell) Mark Bartel and I think Mark keeps doing a good job of progressing his designs but he tends to "move on" to the next one. He's a very small shop and keeping various product lines in production may be too demanding.

Echo again the kudos for the Comet. An underrated amp for sure.

My 40B is one of those won't sell amps. This amp has some of my favorite cleans ever. Mark does great work, but these have seemed the most giggable, all around best amps he's done imo. The amp responds to pedals so well. I don't use the lead channel too much because I love the cleans sooo much, but it does the tweed thing well.

Personally, I scoff at newbies who call Comets "old."

(kidding on the first line, of course - but not on the 2nd! - pictured is my 20th century 1st gen. Continental)

What's the difference between the Comet and the Imperial.

I saw Mark Knopfler using a Tone King and it peaked my interest.

Dammit Jon, that Continental looks mighty fine! A piece one should never, ever sell!

My Meteor II is an amp-for-life.

sfarnell said:
What's the difference between the Comet and the Imperial.
Click to expand...

Better question would be, "What's the difference between the Comet and the Continental?," as both are 4X6V6 amps. Here's what Mark says about them on his web page:

The tonal palette of the Comet-40 is quite similar to that of the older Continental Combo model, though it has been refined and optimized. In particular, the midrange has been made warmer and fatter, and the top-end has been re-voiced for a more "open", "transparent" tone, while eliminating any hint of "shrillness".
Click to expand...

In one-on-one discussions of the two amps, Mark told me that, interestingly, there are very minimal circuitry differences between the two amps The main difference between the two, he said, is the cab design (as Tone King fans know, Bartel is forever adjusting and enhancing his cabs).

On my own Continental, to address the top-end shrillness, early on, I visited Mark in Baltimore for him to replace the stock higher value treble cap on mine with a low value 33pf cap. I then had him wire the cap to a chassis bottom-mounted minitoggle to serve as a bright switch. Mark liked the outcome so much that it became the basis for the bright switches he added afterwards to future Tone Kings.


Regarding warming up the midrange, at my later request, Mark also added the midrange control from his later amps to my Continental, this time rear-of-chassis mounted (again, to preserve the stock front faceplate appearance).


He made some other upgrades as well at my request like the added line out pictured below but I'll stop with that one because I'm already getting far afield of the OP.

Here's a cool shot, though, of Mark playing one of my USA Reverends. I feel confident in representing it's the only pic of Mark with a Reverend in the world today.

The comet was the 1st Boutique amp I ever plugged into back in 1995 or 96(unless
you count the Bedrock line of amps as 'Boutique'; which I'd tried a few of a few years
earlier..) .

OK .. the Comet blew me away at the time - perfect BF cleans and a mean tweed
channel that had me playing old Buffalo Springfield-styled leads and more .

I wanted one immediately, but left the shop with only a brochure, which I still have.

I always wanted one of those 4 6L6 powered/ cathode-biased Galaxy models that
had the console television-George Jetson-styled speaker cabinets .
C

Tone Kings RULE.
I used to own a 2x12 Comet. Sold it, then later had the Galaxy head and cab. tho the Galaxy looked cooler I always though the Comet sounded better.

I now own a one off Blue Sparkle Meteor 2...(SPAM will be putting it up for sale) which is just outrageous; less boxy sounding than the Comet and just sweet.

ROKY said:
I always wanted one of those 4 6L6 powered/ cathode-biased Galaxy models that had the console television-George Jetson-styled speaker cabinets .
Click to expand...

Every play one? The one I did is forever imprinted, sonically, on my mind. It had the nastiest, growliest overdrive I've ever heard before or since! Loud as HELL, too, and ran hotter than hell!!!

This is the coolest amp I've ever seen - bar none. It would take pride of place in my stage setup between the standard lamp and the drinks cabinet. Behind it would be a screen with three ducks in flight.... 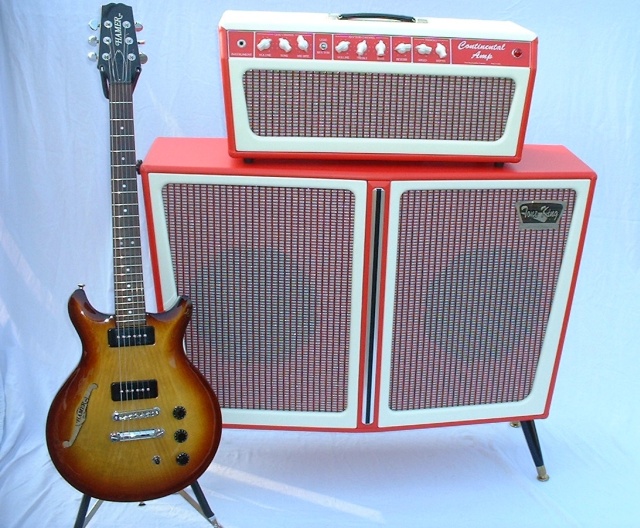