They were on Letterman last night. I really enjoyed them.....are they a four piece band now? Seemed like there was a girl in the back holding a guitar but playing maracas or something?

2HBStrat said:
They were on Letterman last night. I really enjoyed them.....are they a four piece band now? Seemed like there was a girl in the back holding a guitar but playing maracas or something?
Click to expand...

I saw that- they are still as good as ever.

how come no oregon show?
I only have really listened to "call the doctor"
fa-freekin-nominal record

I'd never heard of them until I read an interview in Rolling Stone with Carrie Brownstein which was related to the show Portlandia. I loved the show so that's what made me interested in reading about her. Had never heard of her or her former band before Portlandia. Checked out a few clips on Youtube and was kinda meh to me. Does anyone know if there's going to be more Portlandia in the future?
Last edited: Jan 16, 2015

I learned about Sleater-Kinney after watching Portlandia and checking out other stuff Carrie Brownstein had done... tried listening to a couple albums at random but didn't know where to start and it never caught my ear.

This show definitely changed my opinion! I love how melodic the music is, but not in an obvious way. Just cool little understated riffs everywhere, underneath some powerful vocals. I dig it!

Anyone know what is on Carrie's board? I know she used to use mainly Boss Overdrives with a Roland fuzz and a DL-4 during the woods tour.

I would also be interested in their pedal boards. I think Carrie used a Blues Driver for a bit. I haven't seen many photos though.
P 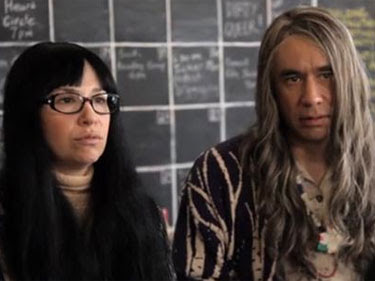 LOL that was my first thought as well. I can't believe Armisen has been off SNL long enough to grow that hair.

b80 said:
I would also be interested in their pedal boards. I think Carrie used a Blues Driver for a bit. I haven't seen many photos though.
Click to expand...

Saw the show here in Vancouver last night. Awesome show - they rocked very hard (and loud). Best show I've seen from them out of the 4 or 5 times I've seen them live. The room was sold out, and the audience was high energy.

All that Carrie had on stage was an amp (a Music Man) and one of the smaller RJM controllers. Didn't see a rack anywhere near - may have been at the side of the stage where her tech station was. No surprises guitar-wise - the SG, the Guild SG with Bigsby, and those thinline teles she's been playing lately on TV appearances.

Corin played her P90 LP, mostly playing bass lines (I assume the whammy pedal was doing the -8ve?). For one track she took off the guitar and held the mic - first time I've ever seen her do that - and the 4th (touring) member, who played a mix of keys and guitar and sat out most of the older songs, covered Corin's guitar part. Sorry I didn't get a good look at Corin's board, other than the Whammy pedal.

Janet was so good - she seems to get better every tour. Most kits sound like crap at super high volume levels, but this kit actually still sounded like acoustic drums with dynamics, even though it was very loud. When the guitars aren't on 10 all the time and there's not cranked bass guitar the whole time, I suppose it's easier to give the drums some breathing room dynamically.
You must log in or register to reply here.
Share:
Facebook Twitter Reddit Pinterest Tumblr WhatsApp Email Link