1972, East Ham Granada. With Clem Clemson. I was 12 so it made quite an impression. They were a badass rock band, that's for sure.

Saw them open for ELP on their "Tarkus" tour. Frampton had quite a bit of youthful fire. The PA crapped out during the first number and Steve Marriott did an acapella ad-lib about how pissed off he was and you could hear every note all the way to the back of the hall. They were a badass rock band, indeed.
D

Long Beach Arena circa 1975 with Journey and Iron Butterfly. Wish I could report on the show, but you know how it was back then... It was a "heady time"
C

Saw them at MSG in '73. As I remember, Black Oak Arkansas opened and were quite awful in mho. Pie started out soulful with the Blackberries, I and alot of the rowdy crowd wanted them to rock. Rock they did, hard and heavy. What a great live band. In the '80s I saw Marriott in a small club. The glory days were over, but he killed it!

Twice , 71 and 75. Great rock band. The 75 show had one of my classic rock moments. It was at the symphony hall and the ushers were supposed to keep the patrons seated. For the stage Steve was telling the ushers to " let them dance, man it's cool were having a party". They didn't heed his words and were hassling people to sit down. Steve puts his guitar down and dives off the stage on to the usher. Pandemonium ensues. The usher is reasigned at the band goes back ro rocking. A more Perfect world !

I went to see Dio on the Holy Diver tour ('83?). The sign at the arena said, "Special Guest; Humble Pie". THe only song I knew by them was "30 Days".
They (he) kick so much ass that the next day I made my mother drive me to Turtles Records & Tapes to buy "Rockin' the Filmore".

I saw them in the fall of 1969 at Fillmore East in NYC. I didn't really know who they were, but they were exciting, rockin' & dynamic and the audience was quickly won over & enthusiastic. The band they were opening for, though, was even better – Derek & The Dominoes, the set that was mostly used for their live album.

I was there at the Fillmore East when they were recording the shows for the Rockin' The Fillmore double album. Humble Pie was powerful in all ways imaginable, just a killer band. Frampton's guitar playing was great, the rhythm section was tight and loose at the same time, and Marriott? Let's just say I had never seen a guitarist and singer with such stage presence and vocal chops. The man never stood still. He was an amazing singer, and an electrifying showman. I'll never forget that show. At one point, Marriott was singing with no microphone, and you could still hear him over the band. That's how powerful his voice was back then.

I saw them again in the early seventies at Roanoke Civic Center in Virginia, when they were touring behind Eat It with the Blackberries on backup vocals, and we met them later at the Holiday Inn. Marriott was totally cool, and he was a little guy, maybe 5' 5." I remember he told us they were "knackered" after the gig. The band was good that night, but not like the first time I saw them. Nothing could top that performance at the Fillmore.

Saw them at the Cleveland Public Hall in the spring of 1972, right after Smokin' was released. Black Oak Arkansas opened for them, as was mentioned by CaptainSG when he saw them. I have always thought Clem Clempson was a better fit for the Pie than Peter Frampton; I guess because of his funky, bluesy playing style. They put on a fantastic show!

I almost forgot until this thread that a PA company I worked for supplied a system and back line for a band calling themselves Humble Pie, though Jerry Shirley was the only member. I think one of the other guys had been in the Babies or something.

This was in the mid to late 90s at the nightclub in Conneaut Lake Park.

They were certainly competent, but calling it HP seemed odd.

I saw Steve Marriott at a NAMM show with a band that included Leslie West. He put on an insane performance. I never got to see Humble Pie as a unit, however.
K

By most accounts {Concert Reviews}, Humble Pie was clearly the better group. 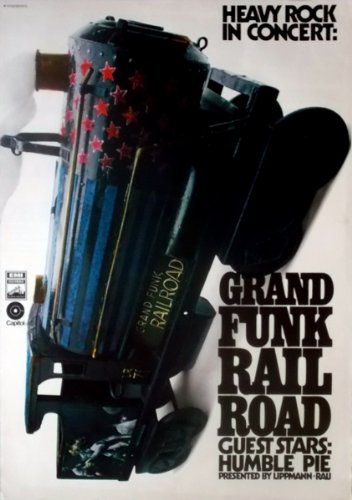 Bingo! How could I forget J. Geils! Answer? I couldn't. THanks for reminding though. J.Geils were on fire that night! Now THAT I do remember. Thanks for the nudge!
T

66fs said:
For maybe 10 minutes. I saw them at an outdoor show in Milwaukee in the '70s. I think it was called Summerfest??? Went up there from Chicago with the drummer in our band in what I eventually found out was a "borrowed" van. If I remember correctly, shortly into their set someone threw a hammer, or maybe it was bottles onstage, they walked off, and basically a riot ensued. When the police were clearing out the audience and said move this van now I was only one straight enough to drive it. We left without the drummer. He spent several days in jail. I remember absolutely nothing about the actual performance by HP. I never saw the drummer again.
Click to expand...

Wow! I saw that same show. I was pretty young so we didn't drive. We took the train up from Chicago, planning on camping on the summerfest grounds (you could do that back then). JoJo Gun, then HP. They were good. But then the riot. People piled chairs and set them afire. The grounds and harbor were littered with empty beer kegs. Saw one thrown through a truck windshield. After the riot the cops came through with billy clubs swinging, even beating on the heads of people in tents. We got the he** out and spent the night in some thick bushes in a traffic circle in downtown Milwaukee. Tales of my youth.

Just checked an old ticket stub from Feb. 1975, Cobo Arena, Detroit. Went to see Johnny Winter, and Frampton's Camel was on the bill. What a nice surprise that was. Never did get to see Steve Marriott though. But I did wear out an 8 track of Rockin' the Fillmore, in my old 65 Ford Falcon back in the day.

C-4 said:
I saw Steve Marriott at a NAMM show with a band that included Leslie West. He put on an insane performance. I never got to see Humble Pie as a unit, however.
Click to expand...

Were they playing Electra guitars?

This kind of stuff is why Youtube was invented.

By all accounts. Humble Pie was out-playing Grand Funk Railroad during their 1971 tour.

misterturtlehead said:
Were they playing Electra guitars?
Click to expand...