Just curious if anyone has identified the Joyo "Hot Plexi" circuit yet?

I'm guessing its a clone of something, but I haven't seen exactly what (OCD, Wampler PlexiDrive, etc?).

Don't know, but I had a go on one on Saturday and was distinctly under-impressed. The Utimate Drive and the American, purple one really blew me away on the other hand.
S

johnh said:
Don't know, but I had a go on one on Saturday and was distinctly under-impressed. The Utimate Drive and the American, purple one really blew me away on the other hand.
Click to expand...

Interesting. A guy on the other thread about the Hot Plexi mentioned that it has a low output and doesn't even acheive unity gain (or volume, I guess) with the settings dimed. That's a deal-breaker for me, if true, though there were other comments indicating there wasn't a low output.

I've read and watched a lot on the Joyo stuff, and here's the generalizations I've drawn so far:


I've been looking for a good Plexi tone, and some people have recommended the Joyo Crunch, but I think that's a different type of tone.

I'm also very intrigued by the Amp Modeling stuff, particularly the "California", which is apparently a Mesa Boogie clone: 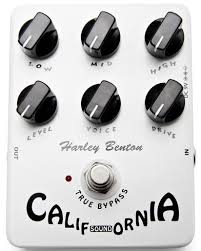 (Harley Benton is apparently a rebrand of the Chinese name, Joyo, but is the exact same pedal)

Can't say without trying it (which is hard since these mostly aren't in stores and half of them ship from China), but the amp modelling ones could be extremely versatile, given they have 3 band EQ and separate "gain"/"voice" controls.

^ Is it? I just assumed it was one of the wamplers, but that's based on very little.

and yeah the crunch box is more hot rodded marshall, and smoother. the hot plexi can be very bright, though. it is fairly amp-like though and cleans up pretty well. for me, it sorta does the early vh thing.
A

This was taken from another forum . .
Not sure how accurate it is but wth ....

It even looks like the Carl Martin.
http://www.carlmartin.com/product_single_channel_plexitone.htm
D

i could've sworn i replied to this. Must have forgotten or closed the link before i actually hit "reply".

anyway... good eye. you're right, it does look alike. though... the original name (which was changed) was very close to a wampler. which does sound suspicious. though obviously not conclusive, and it could be anything. I listened to a few clips of the carl martin... and mine sounds very like that. that being said, it also sounds very like the clips of the wamplers I've heard too, so that's of little help (not to mention, there's only so much you can tell from clips, of course).

I've done some digging online and got nowhere. Couldn't even find a gutshot, which i was hoping might tell us something, because the carl martin seems to be op-amp based while the wamplers are jfet (i think) based, and even with the SMD components which those newer joyos use, I could probably identify an op-amp versus a jfet just by seeing the thing, assuming there wasn't something in the way hiding it. the other newer joyo gutshots i have seen are hard to make anything out from, as the jacks etc. cover most of the board.

I guess I could take mine apart but i'm so darn incompetent I'm scared of not getting it back together...

I really don't understand why people think the OCD and the Ultimate Drive have any similarities. The OCD's settings and sounds are nothing like the Ultimate Drive. The Joyo drive resembles a higher gain distortion to me.
D

i think it might be because people traced the circuit and discovered that it was a clone. Now- from what i remember, it was an amalgam of several different versions of the ocd (so it probably won't sound identical to any one version of the OCD), but yeah. it's not like people suddenly decided it was an OCD clone for a laugh.

EDIT: oh, back on the original thread subject- i listened to the clips again and I have to say, the carl martin does sound closer to the joyo i have. Again- you can only tell so much from clips, and it could well be either (or something else). But if i had to guess, based on clips... I'd say the carl martin.

Are you sure the Hot Plexi is based on the single Plexitone? The Carl Martin has only been available for about six weeks, I seem to remember seeing the Hot Plexi much earlier this year.

that's also a good point. how different is the bigger plexitone, though? also, it's possible carl martin could have had the single plexitone ready for a while before it was released.

that's more devil's advocate, though. it certainly is a good point, and added to the name change (as i said, the original name was a wampler name, though i guess it may have been a trademark or something and fallen foul on that point rather than being a clone), it does make you wonder.

someone really needs to take it apart to take a look. i just need to summon up the courage to take mine apart

tracing the thing is beyond me, but if i see op-amps or jfets that should give me a good idea of what it isn't based on, at least.
7

Really a clone of this.

Kylee said:
I really don't understand why people think the OCD and the Ultimate Drive have any similarities.
Click to expand...

In addition to what dave_mc mentioned, it may be of interest to note that the following text was featured on the Joyo site earlier this year:
"JF-02 Ultimate Drive
Recurrence of OCD
Eternal legend tone"
D

also in addition to what i originally said, i checked the schematics for each, and yup, the ultimate drive is a clone. not exactly the same, and some of the pot values were different (which could cause the differences he was saying), but at the same time it's pretty clear it's a clone, or at least incredibly heavily based on an OCD. the entire circuit topology is pretty much exactly the same.

I love the Hot Plexi pedal. I'm using it in front of the American Sound (which acts as the amp in my chain). I use the Hot Plexi on a low-gain setting, to give me a less gainy alternative to my main rhythm sound (JHS Angry Charlie). It has a great dynamic range, letting me go from clean to full on Marshall dirt based only on picking attack and pickup switching.
D

Kylee said:
I really don't understand why people think the OCD and the Ultimate Drive have any similarities. The OCD's settings and sounds are nothing like the Ultimate Drive. The Joyo drive resembles a higher gain distortion to me.
Click to expand...

its an ocd clone. pot values are different. even the same pedal made by the same company will sometimes have the same issue. if you compare based on sound, not adjusting controls identically the same sounds are there.
i agree though, the UD did seem to have higher gain, though theres 100 dif versions of the OCD so maybe its not a clone of v2 or v5 (the ones ive owned).
D

I know this is an old thread, but last I heard on the freestompboxes site was that this wasn't a carl martin clone. some people were saying it might be a lovepedal purple plexi, but I don't know if that was confirmed or just an educated guess based on the op-amps in it.

It's not a Lovepedal Purple Plexi, the board parts count is too high. It does use op-amp clipping instead of diode-clipping, which is very interesting. It really is like playing a NMV amp, with great tactile feel and response, but doesn't like to have any kind of boost in front of it. A hotter input signal seems to overdrive the op-amp too much. But it's a beautiful pedal for that old-school Marshall tone. I hope someone can pinpoint what it's a clone of, there's no way anyone could depend on this Joyo for regular gig work. It does need the volume mod, it makes a ton of difference in overall performance, but it's a fantastic pedal for the price.

MesaTone said:
It does need the volume mod, it makes a ton of difference in overall performance, but it's a fantastic pedal for the price.
Click to expand...

What do you mean by "the volume mod" here? Is this a well-known mod I can find some info on? For me, the knob that seems to be defective/pointless is the gain knob. Very little difference across the spectrum. It would be cool to be able to get lower-gain tones from it.
You must log in or register to reply here.
Share:
Facebook Twitter Reddit Pinterest Tumblr WhatsApp Email Share Link