Are Gibson guitars that bad?

I bought a Les Paul Studio back around 2008, it came with the ground unsoldered, it was bad sounding, had the pickups replaced for Seymour duncan alnico II, volume knob would make the guitar had no tremble, I had treble bleed installed....etc, Setup was very bad I had to pay a lot to have it set up.... I mean these guitars are not cheap (1,500 USD on guitar center). Also gold paint on metal is fading... It has not been used much.

I went to Guitar center and tried an Ibanez guitar, a not very expensive one, it felt better to play.

Also they where selling a PRS SE245 650 dlls guitar. It played better as well, its finish was superior to the one of the Gibson.
Is a 650 dlls PRS better than a LP Studio?

What am I missing here?

They're certainly not worth the price they charge. I still love them though.

Eireguitar said:
They're certainly not worth the price they charge. I still love them though.
Click to expand...

Well put. I feel the same and they are my favorite guitars

Go with the PRS instead.
I

No, they’re not that bad, though there are a lot of Gibsons floating out there that have been modded, tweaked, and otherwise buggered where folks have tried to “solve” problems with the basic vintage platform and usually moved the guitar in the wrong direction.

I also think that they’ve had a couple of “lost decades” where they’ve misjudged the market and/or put out guitars with features that added little to no value.

And sure, at the prices for some of the high end models, there is a reasonable expectation of perfection with fit and finish issues that some guitars miss, but not more so than some other big brands in my experience.

That said, my Warren Haynes ES-335 is a world-class, zero excuses guitar. My old ES-350 is a little too beat up to fetch top dollar, but it sounds right and plays right every night. My late 90’s Les Paul was a tone king right off the wall more than 20 years ago and has stayed that way through a few thousand shows in every kind of conditions from guerilla touring on up, still plays and sounds great after two refrets. It’s about a half pound heavy for the weight watchers, but it’s world class in every other regard, and I know it was less than 2K, new, in ‘99.

Gibsons are generally very good guitars. They're limited a little by what their target audience wants in terms of updating/improving the designs, and that massive name and reputation makes them a bit cocky about knowing better then everyone else (the same is true of Fender, Rickenbacker, Martin and others) and gives them a bit of room to rest on their laurels and get get away with things an emerging brand wouldn't.

Gibson are particularly ruthless about getting a certain number of guitars out the door every day come what may, which results in numerous guitars hitting the shops with minor fit and finish issues and a few out and out disasters which really should have met with Mr Bandsaw for a quiet chat in the QC department rather than getting sent to a dealer - this is commonly blamed on Henry but really they've been like that a lot longer than when Henry was at the helm.

Can you get better value and tighter quality control elsewhere? Sure, but Gibson are iconic, their designs have shaped the last 100 years of popular music and the bulk of the issues are minor fit and finish things that fade out of mind once the guitar's had a set up and a few year's mileage on the clock, so if a Gibson is what you really want those fit and finish things can usually be overlooked. The majority look, feel and sound extremely good - a lot of the critics are letting disappointment at what they don't get right overwhelm the fact that they're still usually pretty solid pro level instruments - and a lot of people don't want to look anywhere else for that style of guitar when the source is still putting out workable guitars.

We're very lucky these days that there's never been more choice for buying guitars: for anyone who doesn't like Gibson or any other of the big brands, there's a wealth of amazing alternatives from small shop boutique guys to companies like Eastman putting out world class guitars for half the price of a Gibson so people who think they play too fast and loose can vote with their wallet. But for most in that market Gibson are still ticking enough boxes to be at the top of their game.

The guitars are not that bad. The internet echo chamber is.

I don't know what "that bad" actually means. Consider, Gibson makes around 190,000 guitars a year. You played one guitar and are making a judgement on an entire brand. I visited the Gibson shop in Nashville several years ago and the one thing that surprised me was how many manual steps were involved with making a guitar. There were so many stations each guitar had to pass through and, I'm sure, the people operating those various machines had differing skill levels. It doesn't surprise me that there is a variation in the quality of the guitars at the end of the production line.

I would wager though that the perceived "good" guitars far outweigh anything "bad" or they would have gone out of business years ago.
R

Gibson makes some great guitars and some not-so-great ones. You are paying for an iconic name and they are overpriced because of it. There are better values out there, for sure. Because of that, I do not own one, and chose to go with some higher end Epiphones instead as Epi has really improved their quality in the las 5 years or so.

Having said that, if I ever won even a small Lotto, there would be an iconic Gibson jazz box in my collection, like an ES-175 or L-4.

luisgarciaalanis said:
I bought a Les Paul Studio back around 2008, it came with the ground unsoldered, it was bad sounding, had the pickups replaced for Seymour duncan alnico II, volume knob would make the guitar had no tremble, I had treble bleed installed....etc,

Sounds like someone swapped the pickups and screwed up the wiring in the process. Not sure why that is Gibson’s fault.

Gibson does make some very nice guitars, but they seem to have a quality control problem. I was recently looking to buy a semi-hollow body guitar so I stopped by several of my local Guitar Centers to play the Gibson ES-335s they had in stock. I was shocked by the differences in the instruments I played. Out of four different ES-335s I played, only one impressed me as a playable, good sounding instrument. The other three had an assortment of different issues that either made them sound flat or made them them feel stiff and dead in my hands. They certainly weren’t worth the price tag. I think that if you want a new Gibson, you’re better off trying out as many as you can in order to find a good one.

I don't know. There feels a lot more to my Custom Shop R7 than my Custom Shop Telecaster and both were ballpark price-wise. Fender get an easy ride when it comes to QC and I see loads of issues with both brands.

If you want to almost rule out the chances of poor QC then get a Suhr or PRS.

I think there's a big discrepancy between gibsons that the artists play, and the gibsons that are sold to the average people.

I even read somewhere that one of Ted Nugent's Byrdlands was ghost built by Paul Reed Smith (the man) on the commission of Gibson because they couldn't build it themselves. And can't forget Slash's original appetite LP was not made by Gibson at all.

Only you know what is right FOR YOU. If it sounds good, feels good, and its looks excite you to play it, then it IS good. A bunch of strangers on the web who know nothing about you aren't really offering valid info (unless it's about objective stuff like measurements).

Would you want us to pick your girlfriend?


Guitarworks said:
Go with the PRS instead.
Click to expand... 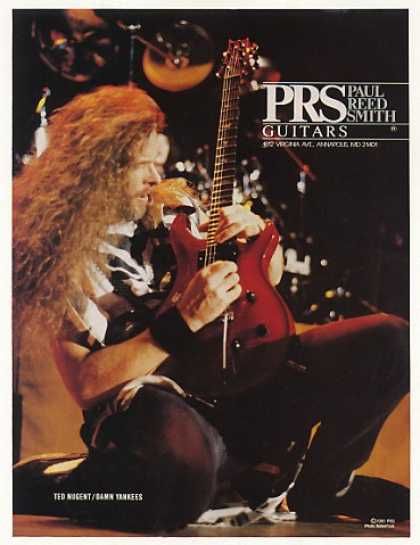 hchoe741 said:
I think there's a big discrepancy between gibsons that the artists play, and the gibsons that are sold to the average people.

I even read somewhere that one of Ted Nugent's Byrdlands was ghost built by Paul Reed Smith (the man) on the commission of Gibson because they couldn't build it themselves. And can't forget Slash's original appetite LP was not made by Gibson at all.
Click to expand...

The Nuge story is kinda sideways. PRS built a few for Ted in hopes of making an artist model. 2 or 3 went in the recent auction.

I have 2 Gibson SGs, a 2006 Special Faded and a 2019 SG Special P90 in Pelham Blue. They are both fantastic playing and sounding guitars. I traded in a Reverend Jetstream 390 for the 2019 and I don't have a single regret. The Gibson P90s alone smoked the Reverend P90s.