Acoustics. I love electrics too, or so I thought. I bought a beautiful 2021 Les Paul 50s Standard in tobacco burst along with a Headrush MX5 modeling amp a little over a month ago. It sounded fabulous and I made several of my own rigs to play songs and noodle around with slide playing. Then when I was done getting it all setup I played for 10 minutes and put it away and then grabbed one of my two acoustics and played that, for much longer. The next night, acoustic. Night after that I grabbed the acoustic. A week goes by and I force myself to play the electric. Sounded great. Loved it for a short burst then got ... bored, like there wasn't any pull from it to get me to play more. I think part of it is all the hassle of setting up, dialing in the tone, all those wires (headphones too) and one night I moved wrong and almost dumped my headphones onto the ground—headphones that cost almost as much as the guitar. The other part is that which I haven't identified in my own psyche, it's just this vague: I like electrics, but I don't seem to enjoy owning and playing one for long. But a much "simpler" acoustic seemingly can hold my attention indefinitely.

Two days ago I thought about it all day long and when I came home at 4pm I just put it and the amp all back in their cases and took them back to Guitar Center.

I just felt like talking about it to someone who might understand. My wife thinks I'm nuts because I've done this three times now (buying and then returning an electric + amp). I told her this was it though, I'm just not an electric player.

When I bought the electric I was debating between it and a Waterloo WL-14x. I should've bought the Waterloo.

Electric guitars and acoustic guitars are quite different instruments. Although they have lots in common, you have to play them different and they’re meant for different situations.

For me, electrics make more sense in a band setting and I have more pleasure playing acoustic when I’m on my own. In the vintage forum someone said that Keith Richards only plays electric when a drummer is involved, the rest is acoustic. That probably makes a lot of sense... so you’re probably not going crazy.

I completely understand where you’re coming from. When I was in college, all I played was electric because I was in a big band. After college, however, I took a long hiatus from playing as I started building my career, which included night school to work on my Masters. Many years later, I brought a couple of Gurian acoustic guitars and got back into playing. My cousin had a Gurian that he had bought new and I always admired that guitar and its amazing sound. Well, I finally had the money, so I bought my own Gurians. That got me on an acoustic kick, and all I played after that were my Gurians. Fast forward another decade, and I was nearing retirement. I decided to get back into jazz and started studying jazz composition and theory at a local community college. I ended up playing in several jazz combos, and that caused me to pick up my electric again. I started playing electric almost exclusively, although I still have my beloved Gurians. They are indeed very different instruments and it’s easy to immerse yourself in one to the exclusion of the other, something I have now done three times in my live. Never say never, however. You just might get the urge and pick up an electric again one day. Life has a way of surprising us.
M

I have four instruments. 3 Acoustic 1 electric. I like keeping the electric around because of the differences and variety that it has to offer. All three of my acoustics are different in their own ways. I play the two acoustics and the electric about equally over the course of a month. It's the resonator that gets the least amount of playing time. It's unique but at this time I wouldn't think about moving it on. Keeping these 4 along with a small amp and a few pedals for the electric keep me interested, learning, playing.
Z

I sold off my last electric about 15 years ago. But I also never stopped playing an acoustic armed with a Dearmond or Gibson P13 pickup. These were my first electrics when I started playing with bands in the mid-1960s and I kept going back to them. To me there was an Elmore James/Lightnin' Hopkins vibe that only an acoustic with a single coil pickup could get me me to.

This was the last one I ever bought - a Harmony H40 with the Gibson P13 mounted beneath the fingerboard extension. I also still keep several Dearmond 210 pickups in the house. 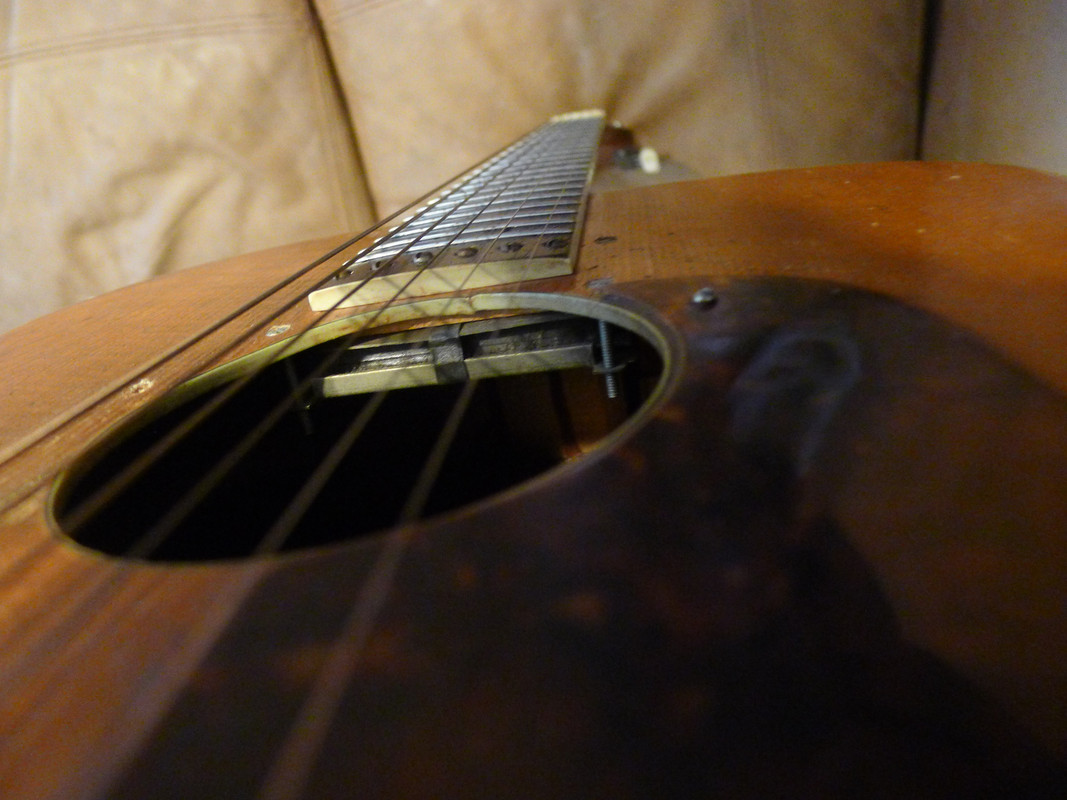 I started on electric as an ‘80’s learner and once the “unplugged” era of music hit I got my first acoustic and quickly gravitated to them. I like that “Keith Richards” philosophy that @slimdave mentioned because I feel similar. Full band… probably best to go electric. Playing alone… I much prefer acoustics unless I am practicing band material and need to work on electric technique for those songs.
D

I love Electric guitars... or at least the thought of them.... I went on a buying spree this past year and now have about 13 electrics to my 7 acoustics.... not one electric guitar has seen the light of day since being purchased... All 7 acoustics come out at different times of the week.... always... Very different attack, My acoustics feel like home.... the electrics? a motel room... LOL

dbintegrity said:
I love Electric guitars... or at least the thought of them.... I went on a buying spree this past year and now have about 13 electrics to my 7 acoustics.... not one electric guitar has seen the light of day since being purchased... All 7 acoustics come out at different times of the week.... always... Very different attack, My acoustics feel like home.... the electrics? a motel room... LOL
Click to expand...

OK, you win the crazy vote. 13 and you don't play any of them? At least I came to my senses after 1
D

The truth is Ill always buy a nice high quality guitar if the price is right. So no loss there…. I really love the idea of playing electric guitar, but Im an acoustic guy thru and thru. I play things I write so realistically Im not even a guitar player…. More of a writer who uses the guitar as a tool.

When covid hit, we had 20 something gigs cancel in a 2 weeks period. In a way, it was kind of a relief. All that travel, getting in a 4am smelling like cigerrettes, scheleping all that gear, ears ringing the next day. Since that time, I have been 96% fingerstyle acoustic. I don't look at it as permanent though. Just working on adding another skill set. I know myself well enough to know my creative endeavors tend to go in phases. I did sell off a few electrics I never played, oh, and some big amps, those had to go, but I'm still keeping enough around that if the phone rings again.....

Great feedback on why you guys gravitate to the acoustic! I've always had a steel-string acoustic around and usually 2 or 3 electrics. After one of my last pre-Covid gigs last year I sold a Les Paul to fund another acoustic, this time a Spanish-made Flamenco..then I picked up another Nylon Godin for Latin Jazz/Brazilian styles.
Not certain when I'll return to Electric but I'll definitely keep my LP and Tele

While I do love my 2 acoustics...a six and twelve string, and they get lots of play, I will spend more time with my electrics...jazz, blues, rock through a great stereo amp setup is tonal nirvana for me.

The only time I play my electric guitars is with my band. So that's every Thursday night and the occasional gig. But I need it in that setting so I will never get rid of it. Once in a while I like plugging it in and playing around with my myriad of pedals. But 99.9% of the time when I pick up a guitar it's an acoustic, and typically a classical guitar too since that is what I mostly play.

I personally will always have an electric guitar, or in my case 4 of them, even if one day the band breaks up. But hey, to each their own. I say you did the right thing. IF it's just going to sit there unused then now someone else can at least have fun with it.
R

I’ve kept one solid body electric after selling off a dozen and all amps (tube). Electric is a lot of fun but even for pleasure use on a large acreage here the authorities may be called in to quell the practice of pushing some real air around. This remaining solid body electric guitar has a very lively in-the-hand resonant neck of perfect flatsawn maple with true slab rosewood fingerboard extending over the end near the pickups. The Japanese have fresh water lakes full of prime Sitka spruce logs and other large buyers have had fine rosewood. This guitar unplugged has informed some of my ideas on flattop acoustics, in that the latter should be very highly selective in tonal production, or else it’s not good.

I'm primarily an acoustic player, and it took me a long time to realise that acoustics and electrics are different instruments. I play acoustics and mess about a lot with electrics. I got discouraged when I realised how inadequate my string damping skills were.
You must log in or register to reply here.
Share:
Facebook Twitter Reddit Pinterest Tumblr WhatsApp Email Share Link