Hi all, hopefully you can help!

I have an old tube amp that made all kinds of noises when I first got it. Hummed and rattled like crazy. I got around to replacing all the electrolytic caps and putting a three prong power cord, but when I put it back together and turned it on, the fuse blew after a second or so. Put in a new fuse and blew again. Took out the power tubes, and still blew. No tube rectifier on this one. I figured something must be shorted. I have a digital multimeter, and used the continuity tester between the neutral and hot in the power cord plug, and it beeped indicating continuity ONLY when I flicked the power switch ON. I desoldered the two black wires of the PT and tested for continuity between them, and it beeped again. Using the ohmmeter it reads around 6 ohms. I think I have a bad PT but, what do you guys think?
Any help appreciated! thanks!

A good PT is going to read real low ohms like that.
Get a bunch of fuses or spend a few minutes rigging up a light bulb limiter. (Google it) Then lift the secondary wires from the PT and try it if you get all of those disconnected and your still blowing fuses (or the light bulbs still full bright) either your PT is shorted or your primary wiring is shorted.

Since you did a grounded cord you might want to look at that first. Some cords don't match standard color codes.

Right now I suspect the work you did not the PT.

Yeah, I might have messed up something. It's a bit harder since this is not a common amp and there's no schematic handy. With the EL caps all I did is replace one by one to make sure I put it in the right place, right values and right polarity. Took pictures before and after and double checked everything. The three prong cord I put the ground to one of the lugs that fix the PT to the chassis, neutral straight to one of PT black wires, and hot to the fuse, then power switch, then the other black wire PT. But I went by colors in the three prong cord, white, black and green, but as you said, they might not match the standard or might have the colors mixed. What throws me off is the fact that the continuity tester in my DMM indicates continuity between hot and neutral in the power cord when I flick the power switch ON. The fuse blows even in standby.

What kind of amp is this? What are the tubes?

The power transformer primary is just a single wire wrapped around an iron core. The two primary wires coming out of the PT are the two ends of one wire. When your meter uses DC current to measure continuity and/or resistance (ohms) it's simply measuring the resistance of that wire. Turn the power switch off and the continuity through the primary is broken, power switch on and you have continuity. 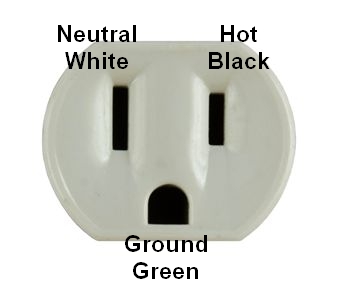 It's a fixed bias amp with the same tube lineup as a bf deluxe reverb except no tube rectifier. Checked the wiring as robrob suggested and everything's ok. I'll give the light bulb limiter a shot next week when I can get the parts

Update: almost two years after... I decided to give it another go at this. Zenas was right.

Tested the PT following the instructions at Geofex page and everything pointed to a good PT. Rigged up the light bulb limiter and still seemed like the PT was good.
So I started checking for shorts, pulled up the deluxe reverb AB763 schematic and compared to my amp trying to figure it out, turns out it's really close but with a diode rectifier instead of a GZ34.
What I did wrong was during the replacement of the filter caps, not during the three prong conversion. I mistakenly wired the output of the diode rectifier circuit to a tab next to the one where it should have been... so it was wired to ground instead of to the filter caps. There was my short! Fortunately this mistake didn't take down anything else than a few fuses, and finding it and fixing it felt so great when I got to finally hear the amp again, smooth, almost zero noise or hum, it's running like a champ!
You must log in or register to reply here.
Share:
Facebook Twitter Reddit Pinterest Tumblr WhatsApp Email Share Link