I am looking at a used basswood Suhr Classic w/ two humbuckers and a standard trem. Anyone own one of these suckers? I'd like to get some mini reviews. This would be my first Suhr and my first guitar without a Floyd. Is the H-S-S config a lot more versatile? I don't see a ton of H H Suhrs but I always have difficulty playing a guitar with a middle PU unless I sink them flush with the pick guard. My guitars now are primarily the Lynch set-up with one humbucker and one single coil in the neck. Just need some outside opinions. Much thanks.....

I have a standard with a basswood w/ a maple top and neck and it is probably my favorite Suhr out of the three I have (the others are a classic and a classic t). I am not sure what effect the maple top has-probably makes it a bit brighter-but I would not be scared of it.
P

I own a Standard with Basswood and Maple top and it is just awesome. Great combination for a guitar. Here it is: 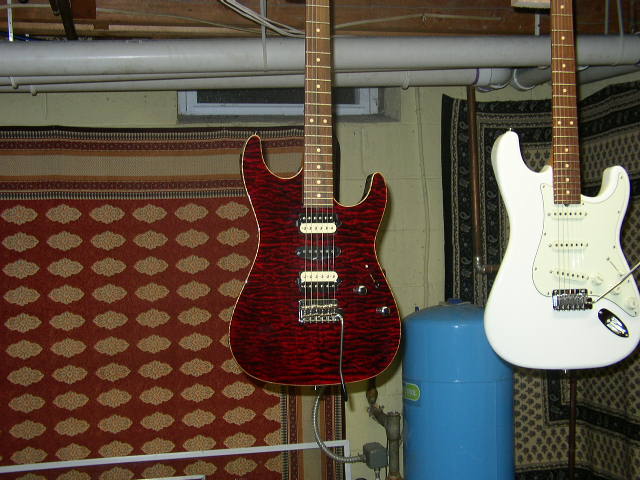 I cannot stand basswood as a tonewood, but I admittedly have not tried one with a maple top, or one that was made by John Suhr. I have an 6.5lb ash Suhr with a ample neck that is my favorite modern strat.

My Standard is basswood with a maple cap and the '56 Big V neck. While it's not a dual humbucker, it's a stellar instrument.

What would you estimate the weight difference to be between a basswood/maple cap bodied guitar v. just basswood bodied?

I'm not a big guy and i love the weight of my current basswood bodied guitar. I switched from an alder body to a basswood body about eight months ago and it feels so much better to play with the basswood strapped on...
U

Originally posted by Chi
I cannot stand basswood as a tonewood, but I admittedly have not tried one with a maple top, or one that was made by John Suhr. I have an 6.5lb ash Suhr with a ample neck that is my favorite modern strat.

As i´ve always said, basswood is a very special wood. It IS a great tonewood, the problem with it was the over-use of it in the 80´s. Real quaility pieces were rare, and the usual was the bad quality, that´s why people see it as a "bad tonewood". But a real quality basswood body is a great sounding one.
About the Ibanezes/ non-maple top basswwod bodies, you have to pay major $$$. I´ve had like 10 Ibanezes, most made of basswood. Cheap ones sound like ass, expensive ones sound ok, and custom shop ones sound like f***ing heaven, specially if you change those horrible Dimarzio pups they use to mount.
I own a Jem 10th anniversary, custom shop, 800 made, mine is 242. The body is selected basswood, i think they´re made of old pieces.
I swapped the horrible dimarzios and installed some duncans. That guitar sounds fabulous, can dare my tylers without a problem, has literally killed some Tom Andersons, and still anyone that tries it says it has "some magic".
As i love Suhr guitars, i´m completely sure their basswood body sounds awesome.
Cheers
N

Does the "good" basswood dent too if you look at it too hard?
F

IIRC, that was one of Tom Anderson's favorite combinations as well....

The one I am looking at is straight basswood... here is one that is very similar...

Thanks for all of the feedback guys!
C

Originally posted by NuSkoolTone
Does the "good" basswood dent too if you look at it too hard?
Click to expand...

yeah i forgot also that basswood was extremely soft relative to other tonewoods...
U

Originally posted by NuSkoolTone
Does the "good" basswood dent too if you look at it too hard?
Click to expand...

Depends on how the body is finished...

For Rock, Map/Bass is an awesome combination. Very punchy, somewhat aggressive. Fast attack. Cuts through nicely.
Im finding that I prefer Alder on my guitars though (personal preference)

Originally posted by Suhr
Much of that old 80's wood was called "Basswood" but really wasnt! It was a cheap substitution

Now that is interesting...
P

I have a basswood guitar. It sounds really fat. I could see the Maple top adding a little zing to the top end. I'm now a fan of basswood
P

I have a few basswood Ibanezes. And it seems that basswood is generally associated with guitars like hte Ibanez RG and S series as well as other similar Rock/Metal oriented guitars.

The Basswood Suhrs I played all had maple tops and had a sound tht I was familiar with. But a Suhr or Anderson basswood guitar really isn't to be compared with the average Japanese super strat. Having a quality maple top over the basswood extends the high frequency response and most japanese super strats aren't offering maple tops of significant thickness.Actually, I don't know of any basswood Ibanez models that have a maple cap at all.

That said, I think basswood offers a unique neck pickup sound. When you solo on the neck pup and wail on the string, I believe that you get a neat little honk out of the basswood . It's a subtle thing but I havent heard it in any other type of wood. I normally prefer brighter woods like alder and ash but I'll always hear that honk that seems to be present when I use a neck pickup on a basswood guitar.
U

There are some Ibanezes with maple top /basswood.
Now come to my mind some the JPM90HAM (John Petrucci anniversary model) and some of the first j-customs, but i´m sure i´m forgetting some of them.
You also have the music man Van Halen/Axis and the Peavey Wolfgang with the basswood/maple body also.
I like basswood both with or without the top. Has a very sweet sound.
P

I own 3 maple top/basswood body Suhrs all with maple necks. In fact, those are the only guitars that I currently own. Very neutral sounding (broad eq) with a pronounced but sweet top end is how I would describe them. I've owned Andersons with the same wood combinations and they were similar sounding (except the Suhr pickups have a little snarl and bite to it that Anderson pickups don't have). I wish my Suhrs were fatter sounding, but I guess that's what les pauls are for.
You must log in or register to reply here.
Share:
Facebook Twitter Reddit Pinterest Tumblr WhatsApp Email Link