jamester said:
I liked my 330 when I had it, but it was a little flubby with gain and prone to feedback. Generally I prefer 335 semi-hollow style, but the PRS seems to be its own thing...
Click to expand...

You are right about PRS hollow and semi-hollows, being their own thing.

There are 3 versions of the SE Hollowbody. The Standard is mahogany and sounds darker. The SE Hollowbody II has that laminated maple sound, like a 335, only a little more alive. The 335 type, might be more flexible. I've never had feedback problems with my Hollowbody II, but I've played a lot of hollow bodies. The SE Hollowbody Piezo would be the most versatile. But I wasn't going for the round-hole acoustic electric sound. I went from Gibson, to Heritage, to Gretsch hollow bodies. So that might just be my journey. I also own a PRS, S2 Singlecut Semi-Hollow that sounds and reacts more like a full hollow body, despite looking like a chambered Les Paul. It's actually carved, not laminated. 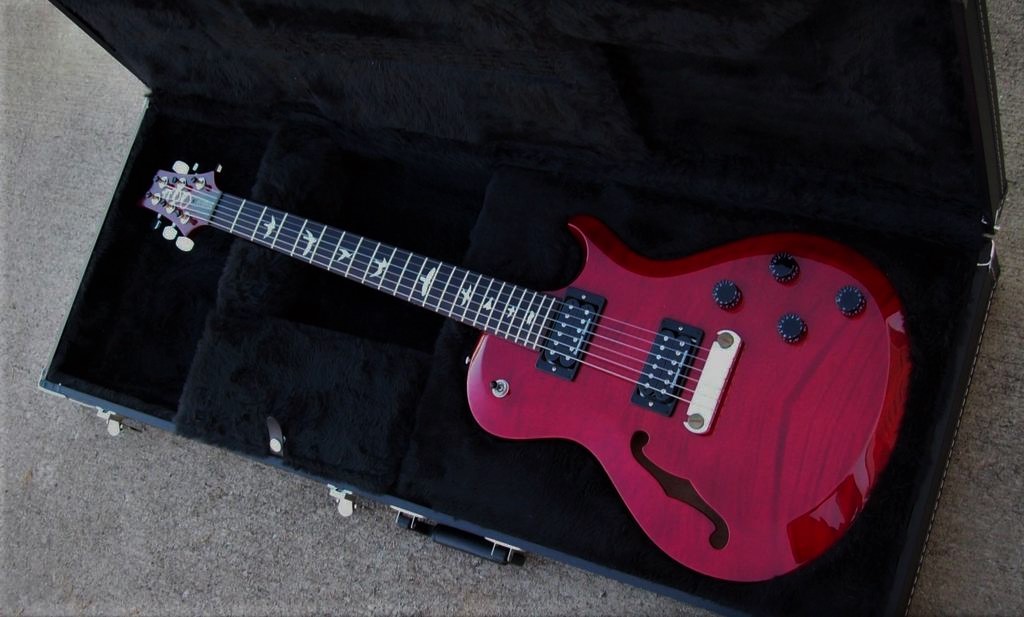 Mike Carrigan said:
Here’s an idea: I bought an Ibanez AS-73 new at GC for around $325. I already had a new natural finish Epiphone 335, the guitar tech was a buddy, and told me that Ibanez knows they are competing with Gibson, Heritage, Collins and anyone else who makes one, so they add additional value to make their guitars more attractive.
Click to expand...

I 100% agree with this. I think the big brands rely on their brandnames to sell product, and thus that a good chunk of the sticker price is for that headstock. Another company trying to get marketshare against those companies will tend to offer better spec sheets. Sire comes to mind. Their "Les Paul" and "Strat" guitars are better spec'd than Fender/Gibson's at almost double the price, and they are priced like Squier/Epiphones. That being said, the latter two are putting out generally great stuff these days as well.

Richard Prokopchuk said:
My own's neck is tight as can be. no cracks or gaps.
Click to expand...

I agree with your comment on a back control plate. It would make swapping pickups and wiring much much easier.

Mike Carrigan said:
Just out of curiosity, have you ever tested the WBT solder for sound quality? Those of us in la la land want to know. I don’t have your soldering experience, and I’m wondering how much high-end audio experience you might have. Just a couple of friendly questions.

The bass player in our band was an AF vet, and certified to solder on the Space Shuttle, who gave me some pointers, so I can make a fair joint.
Click to expand...

The industry standard/recommended solder for all connections in guitar and bass wiring is rosin-core 60/40. The industry standard is based on the composition of the metals being soldered and science/math.
The benefit of silver solder is more its melting temperature and corrosion/oxidization resistance, the latter being why industries like aerospace and marine would prefer it, for example. Its effect on the signal quality or signal strength in a pick up circuit is so minimal as to be inaudible compared to industry standard solder, if the joint was soldered properly.

NASA is a civilian agency, not part of the DOD. They employ civilians for their manufacturing and service work, not the USAF. There is no such thing as a USAF certification for soldering on the space shuttle. Speaking as an infantry and armored recon vet, a little (or a lot of), exaggeration and embellishment is hardly uncommon with ex military, especially with the rear echelon types.

Here are some expert opinions on the subject...
"I work in both the Pro-Audio and audiophile industry. As long as the solder is used properly, and makes a solid connection, then the type of solder makes zero impact in audio quality.
The flux inside the solder, on the other hand, can make a big impact. But here too, if used properly, it won't matter. Basically, clean off the flux that is supposed to be cleaned off. Some flux is fine if not cleaned up. Rosin and "no clean" flux is fine left on there (mostly)."

The part in brackets below is both relevant and accurate.
"Even in a power amplifier output stage where the impedances are a lot smaller, it doesn't matter. Consider that it's common to degenerate the emitter resistors of a complementary pair emitter follower with 0.22 ohm resistors which are effectively in series with the speaker load. Even these small 0.22 ohm resistors will swamp the resistance of their own solder joints.
(Some audiophiles will no doubt try to convince you that the junction between solder and copper causes distortion that is audible to one who possesses golden ears.)"

Again, the end of this quote is relevant and accurate. The "minor selling point" being a 'keyword', rather than a fact supported by science.
"Lead solder works fine (though it does eventually crystallize; after around 40 years it's worth reflowing every joint!) but an unqualified recommendation to use it is bad advice. If you are building equipment for your own use, or for sale in those parts of the world where it is still allowed, go ahead.
But if you live elsewhere or aspire to selling worldwide (not so ambitious since eBay started!) then look for lead-free alternatives. Some of these contain a small percentage of silver; it may not make any difference to the sound but it it may be worth a minor selling point."
Last edited: Jul 2, 2022
J

I’m not sure if this had been mentioned yet but epiphone latest bb king red 335 w varitone looks like a sweet deal to me.

jgraham140 said:
Epiphone Sheratons are nice guitars in the ES-335 mold. I have a Sheraton II made in Korea that is virtually flawless. I changed out the pickups for Gibson '57 PAFs and also changed the toggle switch and output jack. My luthier said the potentiometers were fine. It is my main guitar and I usually prefer it to my two Strats and '52 RI Telecaster.
Click to expand...

I just tried a Sheraton II and found it to be very nice. This, after having just sold a 2021 Gibson Les Paul 335, so that was my frame of reference.

I got the inspired by Gibson Epiphone and changed pickups to Seth Lovers and Bridge and tailpiece to a Gotoh. With a good setup its a really nice guitar

sgguitarzz said:
I got the inspired by Gibson Epiphone and changed pickups to Seth Lovers and Bridge and tailpiece to a Gotoh. With a good setup its a really nice guitar
Click to expand...

Enjoy in good health, @sgguitarzz ! If I may adk, how would you describe the difference between the stock pickups and the Seth Lovers? Many thanks in advance!

Auditory Driving said:
Enjoy in good health, @sgguitarzz ! If I may adk, how would you describe the difference between the stock pickups and the Seth Lovers? Many thanks in advance!
Click to expand...

More full bodied and warm but also always some chime and sparkle on top. They are cleaner but also overdrive very nicely. Lots of pop too for lack of a better word. It was my first time using Seth Lovers as I am more of a Dimarzio fan but many people recommended these in a 335 style guitar and they were right on point. I think they are perfect for this guitar. The original pickups were okay but these took it over the top. Not cheap but worth it in my opinion.

sgguitarzz said:
More full bodied and warm but also always some chime and sparkle on top. They are cleaner but also overdrive very nicely. Lots of pop too for lack of a better word. It was my first time using Seth Lovers as I am more of a Dimarzio fan but many people recommended these in a 335 style guitar and they were right on point. I think they are perfect for this guitar. The original pickups were okay but these took it over the top. Not cheap but worth it in my opinion.
Click to expand... This JSM20 is quickly growing on me.

My plan is to wait for my uncle to bequeath his '79 347TD to me. Cheapest route by far.

RolandKorg said:
I just tried a Sheraton II and found it to be very nice. This, after having just sold a 2021 Gibson Les Paul 335, so that was my frame of reference.
Click to expand... I'll put in another good word for Eastman. After hearing quite a lot of good things about them, I purchased a T486 (with Bigsby), which I've had for about a week now and I consider my itch for a 335 pretty well scratched.

Thank you everyone for the suggestions. 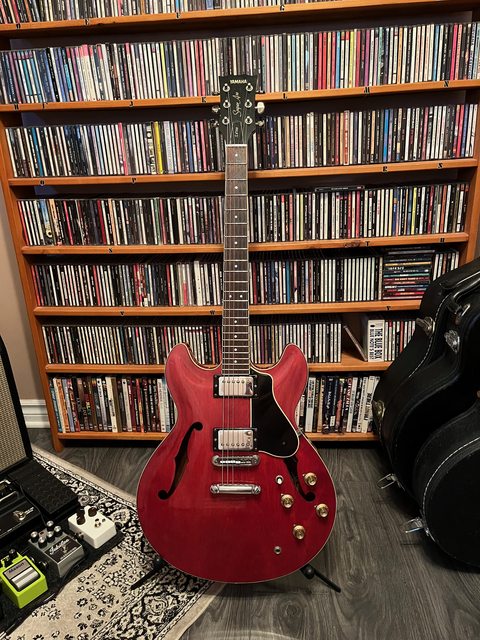 Well, I´ve been thinking which of these would be the best for a ES335 and I´ve tried the Ibanez AS113, Ibanez AS93, Epiphone ES335 Inspired by Gibson and a Guild Starfire 1.

Conclusion:
The best of them was the Ibanez AS113, very well balanced guitar, sounded very nice in all sound spectrum and fretboard. It´s also a bit heavier than the rest. Very well made, good materials, a great effor to some details in these price range.
The Ibanez AS93 was the second that I´ve liked more and it shares all the qualities above from the AS113 but with some less points on the well balanced guitar in terms of sound thru the whole spectrum. The trebles are beautiful and resonant but not so well as the AS113... Don´t know why, since they share the same body construction and eletronics (apart from the coil slipter), at least on paper.

The Epiphone ES335 "Inspired by Gibson" I didnt enjoyed at as much as I was expecting. It has that 335 sound, but it didnt resonante. The basses are powerfull but the trebles are sterile, its lacks resonance in the trebles side. It felt/sounded cheap...

The Guild Starfire was in the same ball park as the Epiphone, so I didnt care much about it as well.

Maybe I didnt had luck on the Epiphone and Guild guitars that I´ve tried, but again, it confirms that Ibanez is far ahead in their quality and quality control also.

But I do have to mention that regards to the sound, the sound of the Ibanez tends to be more in the jazzy side than the tipical 335 that we are used to hear. In that case the Epiphone wins in the typical 335 sound. So I think if you are really into this 335 sound than try the Epiphone Sheraton Pro, I´ve been reading that its another step from the "Inspired by Gibosn" version, which is always goood to know.

I´ve brought home the AS93, have made a proper setup and it plays beautifully. It feels very solid, with very good materials and made. So I don´t have any doubt that will last forever. And that is also something that we should be looking for, reliabilaty imo.

I wish could bring the AS113 home, not because of the coil split (which I dont care) but beacause it sounded a step above from the AS93... but it cost 200 euros more and it´s a bit for me at the moment. But not that much that it would make me think that I should wait to get the AS113, because the AS93 is a great guitar also.

Just a quick snap. Sorry about the sound but it was late at night and didnt want to bother my neighbours.