Buchanan's "You're Not Alone"

I bought it on vinyl a while ago and am listening to it right now.

Anyone have info or background on this album? Not much available online, other than it was a "commercial failure" and caused him to take a break and pause and reflect.

Obviously very different than his first two albums, which are the other ones I've got on vinyl. Seems like pressure from record company to sound more hard rock/marketable... but I do like it, still. It's a fun listen.

Curious as to what other background info or thoughts anyone can provide about this record, thanks. 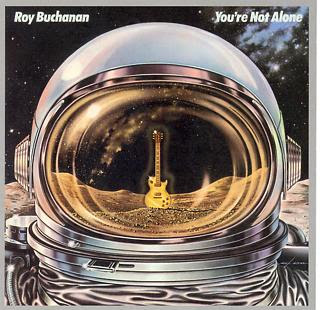 Interestingly, many of the Amazon customer reviews call it the BEST BUCHANAN ALBUM EVER.

Looks like the band was Ray Gomez on acoustic & rhythm guitar, Willie Weeks on bass and Andrew Newmark on drums. Gary St. Clair did lead vocals on Down by the River and the backing vocals on that track were done by Luther Vandross(!), Krystal Davis, Alfia Anderson & David Lasley.

Ray Gomez is on Facebook, he's pretty open and approachable. You might get some info from him on the album.
G

Prob just another session for those guys. I worked with Andy for a week twenty years ago. Nice guy and fun drummer.
8

I was a big Roy fan back then. His first few albums were really raw and pure Roy style. Livestock really blew up, people went really crazy over that one. Then Loading Zone departed and had more production polish and probably money behind it, and had Stanley Clarke, Steve Cropper and other great guys on it. It went over well with some good stuff. I think You're Not Alone just went too far into production and an attempt to sound like Dark Side of the Moon or something. The things people liked about Roy were not reflected in that album. Looking back at it, it might be a nice album, but at the time it was like Johnny Winter doing a disco album or something.
You must log in or register to reply here.
Share:
Facebook Twitter Reddit Pinterest Tumblr WhatsApp Email Share Link