Dead's Wall of Sound - was it a thing?

The question is in the title. Was the Wall of sound a reasonably good thing? It was absurd in its own right, but did it also bring anything sonically?
Also, Dead do not strike me as particularly sound quality dependant band... it's not Pink Floyd or whatever...

So was it just an expensive gimmick or was it a thing?

Pick53766 said:
Also, Dead do not strike me as particularly sound quality dependant band... it's not Pink Floyd or whatever...
Click to expand...

you would be wrong about that

I didn't have the opportunity to hear the actual GD Wall of Sound first-hand. But theoretically, it would have filled the arena with the same clarity in every seat in the house. Line arrays move a bigger column of air, so higher frequencies that would normally be dissipated in the first 50-100 feet can survive a greater distance. And if there were a separate column for each instrument and voice, it would be even clearer because each set of speakers was only responsible for reproducing one element. If done right, the whole thing wouldn't be louder, just clearer everywhere in the arena.

walterw said:
you would be wrong about that

those hippies were at the forefront of live sound experimentation and advancement of the art from the start (including crazy schemes like the Wall of Sound)
Click to expand...

Correct. The Dead and their associates were known for experimentation in many different areas. For example, their patron, the infamous Owsley Stanley invested the money he made from manufacturing his legendary LSD into co-founding Alembic, which was the first company to build active electronics into basses and guitars, among other innovations.

The Dead were also the first band to allow and even encourage fans to tape their shows and these fans helped to develop technologies for mobile recording.

The Wall of Sound was the largest sound system ever created at the time. It was a massive investment and a logistical nighmare, but the Dead felt a committment to delivering the highest possible quality sound to their fans in the stadiums they were playing. 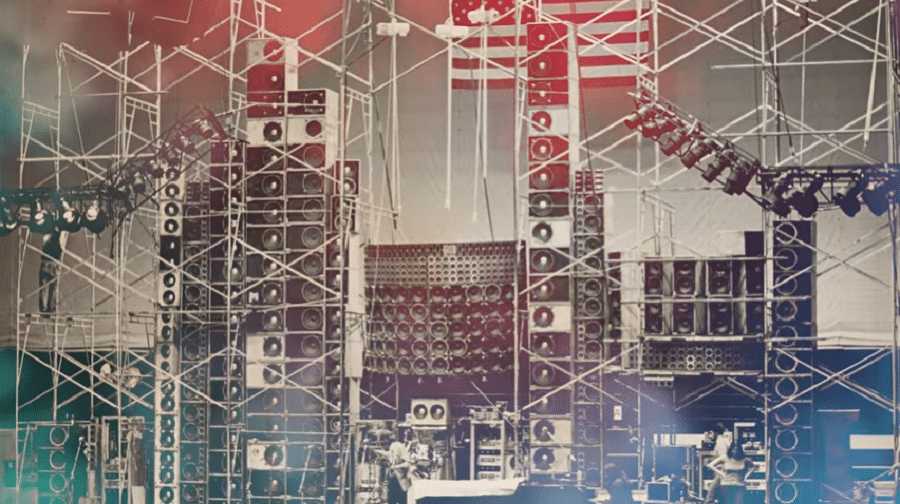 The Story Of The Grateful Dead's Wall Of Sound

The Monster Sound System When the Grateful Dead debuted their Wall of Sound, it was unlike anyone has ever seen at that point - 70 tons, three stories high and 100 feet wide. It was innovative and technologically advanced. And it set the bar high in concerts and live performances. Bassist Phil L

I wouldn't care If I ever heard a GD song or If I ever hear another.
But John Meyer was buddies with them and the rest is history.
A

It was a very big and powerful thing. Great sound, impractical to keep hauling around. The Dead and their crew greatly impacted and influenced live sound production. Lots of evidence to back that up with a little reading. Google is your friend.

I mean, the fact that they built it and toured with it tells you that they felt their sound quality was important, right? Just the OCD of it sort of answers your question IMO.

So, technically speaking, logistics aside, it was a well working thing that did the trick? Any major band would want it (price, logistics aside)?
How would it compare to today's systems?
C

The Grateful Dead and crew were on the bleeding edge of live sound throughout the 1970’s. It is my understanding that most of these sonic achievements were the brainchild of Owsley Stanley (LSD Pioneer), who birthed the idea for the Wall oF Sound. Furman Sound (you know, the power conditioners) were employees of Stanley at the time, and Ron Wickersham and Rick Turner of Alembic were also involved. Pretty sure David Meyer was in the mix too. I don’t know the specific details of the entire team, but they were all connected. According to Phil Lesh the Wall of Sound was like “the voice of God.” Quite a statement.
Last edited: Jun 19, 2022

Always thought they came up with the idea for it because they were all on acid a lot during that time (and beyond). I don’t say this as a bad thing. Free the mind etc. Well intentioned pursuit of sonic grandeur.

I remember reading an interview with them around that time or earlier where they wanted to (or did ) record whatever album without using the studio’s console- something like plugging the mics directly into the multi-track. They just tried stuff.

If I recall, with the wall of sound the end goal was the loudest clean sound possible, the mains were also the monitors (the band heard what the audience heard) -and the band contolled the mix. Geeze who wouldn't want this PA if it worked as envisioned? Whether it actually did, who knows? It was only used about 6 months and Owsley had an increasingly tenuous relationship with them afterward i believe.

As a non-Deadhead (not anti, just non) it also sorta seemed like their way of quasi-competing with other big live acts in the early/mid 70s who were -before the wall of sound- louder and showier. Led Zeppelin, Stones, Who etc. But that’s just me, imho.

‘They aren’t the best at what they do, they’re the only ones who do what they do’- Bill Graham.

I always gave props to the Dead for chasing whatever dreams and trying sh*t and the costs be damned.
C

Pick53766 said:
So, technically speaking, logistics aside, it was a well working thing that did the trick? Any major band would want it (price, logistics aside)?
How would it compare to today's systems?
Click to expand...

My understanding is that is worked quite well, but was cost prohibitive to tour with ( to put it extremely mildly).

Todays systems are very different. We are now living in the digital age, where things are smaller and more powerful. Probably the closest comparison regarding fidelity would be a Meyer Sound System, though they are quite different than the Wall of Sound, they place fidelity at a premium. I’m lucky enough to live in GD Country, where many venues I play use Meyer systems. With a knowledgeable sound guy, they sound absolutely outstanding.

The Grateful Dead's experiments helped lead to what we know today as 'Modern Concert Sound'. The Wall of Sound might have been the apex of the GD's experiments, but even before the WOS they were building systems that pushed the boundaries. Companies like Meyer Sound, Alembic, and Furman all have their roots working for the band.

With respect to the WOS itself, I've read mixed reviews. While it provided clarity at incredible volumes, due to it's design it was unreliable and expensive to haul around. It was however a visual site to behold. Love them or hate them, they were pioneers in so many ways

Pick53766 said:
So, technically speaking, logistics aside, it was a well working thing that did the trick?
Click to expand...

as i understand it, the idea was that each member had a tower of "himself" behind them, going all the way up. so the player would hear the bottom three or four boxes while all the rest went over their heads and covered the crowd, with more boxes actually hitting more ears as you went further back in the hall

one big drawback was those speakers behind the players were therefore blasting straight into the vocal mics, so they did a thing with two vocal mics right against each other with one phase reversed, so the mics would hopefully cancel the stage sound while the singer would sing through one of the mics, coming through clearly

Pick53766 said:
How would it compare to today's systems?
Click to expand...

oh not even close to what they have today, it's like comparing a 1968 computer to a modern computer. still, some of those principles survive in modern line array systems, those long vertical stacks of speakers engineered to cover specific areas of the hall

griggsterr said:
I wouldn't care If I ever heard a GD song or If I ever hear another.
But John Meyer was buddies with them and the rest is history.
Click to expand...

Oh, the Meyer's! They used to live next door. They had a Pioneer sound system. They used to play it so loud I couldn't sleep. I was grateful when they were dead and I could sleep. Nowadays in some places you can get THC to help you sleep. I'm told a lot of THC was ingested by that band, The Grateful Deads. By the way, which one is Grateful?

Most of todays large venue sound systems borrow from or are direct descendants of the wall of sound. The work the dead, Stanley, Alembic, Furman and others did in the seventies changed the game.

Then we move on to the business model, and how with the advent of iTunes, the profit was sucked out of selling records. The dead pioneered the current model of focus on tour revenue as the primary source of income. Through the eighties and early nineties the GD were the largest grossing touring act on the planet.

Raw drivers didn't have the power handling capability back then that they do now so one way around it was using many drivers in a line array along with many large amplifiers.

The Wall of Sound ( I heard it once back in the 70's) was impressive for it's time. It could play loud and undistorted even outdoors with what was then reasonably wide bandwidth. I remember if you weren't probably at least 75-100 feet away it was pretty beamy and coverage could vary significantly.

The wall of sound is one of the basis of modern line array sound systems used in venues today. That experimentation did a lot to advance sound systems.

walterw said:
one big drawback was those speakers behind the players were therefore blasting straight into the vocal mics, so they did a thing with two vocal mics right against each other with one phase reversed, so the mics would hopefully cancel the stage sound while the singer would sing through one of the mics, coming through clearly
Click to expand...

IIRC the mics were custom with two mics a few inches apart, going into a custom differential amp that rejected all sound coming through both mics. If you look close to concert video from that time, you'll see they will sing close into one of the two mics, and that would pick up as the sound was going into one mic only. You can actually hear the mic effect in some live recordings; as they back away from the mic the vocal sound will get a bit trebly/thin and then cut out. It's quite a clever solution to a vexing problem in such a setup.

I have read some folks that claimed the WOS was the best sounding PA they had ever heard. Very clear and non-fatiguing, and could be heard a LONG way from the stage. But it was just too hard to tour with.
R

ILookLikeElvis said:
I mean, the fact that they built it and toured with it tells you that they felt their sound quality was important, right? Just the OCD of it sort of answers your question IMO.
Click to expand...

This is a non sequitur.

As I read your statement, some people thought a thing, and spent a huge amount of time, energy, and money to make that thing a reality. The fact that they did that means the thing was good.

That doesn’t follow. Having done that doesn’t mean the thing was good, or worth their having spent all that time, energy, and money.