Dear Boss (a request for presets)...

posted this in another thread and thought i'd share it here as well... i may be crazy, but i also might not be...

Several companies have shown the capability to mod a Boss pedal to have a 2nd 'preset' so i'm wondering, why hasn't boss taken steps to do this themselves?

In the past, Boss has utilized the dual Metal Zone style knobs on their pedals, and the DD7 can switch between on/off and tap-tempo by holding down the footswitch. So what if they were to incorporate both of these into a pedal (say a reverb) where the upper knobs control setting 1, and the lower knobs control setting 2 and then you can switch back and forth by holding down the footswitch (with the LED changing colors to indicate the setting). They could even have an extra jack for an external switch to change them quicker.

I know it's not as fast/efficient as something like the strymons with a favorite switch built in, but it'd be smaller, and for those guys who need that one setting for a specific song and are too lazy to bend down and change the knobs.

what say you TGP? Am i crazy?

I think it's infinitely easier to keep modifying effects than to completely reconfigure/ retool existing designs.

Hopefully the DD-500 enclosure means a multi-reverb will come along at some point though.
Last edited: Jul 9, 2015

you mean the boss sd2? 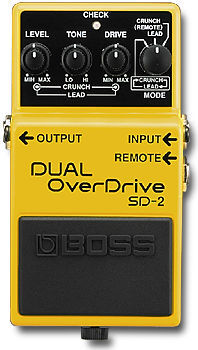