I have been playing with Acoustic Preamps / EQ pedals lately and found that not one fully meets my needs.
So I edited a picture and "created one" for fun using a TCE Bass preamp as a platform - I think it covers all my live acoustic playing requirements. EQ with parametric Mid EQ, Reverb, BodyRez, Solo Boost, Mute, XLR out, 1/4 out, could add Phase and Ground lift switches on the back to help with feedback and hum and a tuner output or an effects loop.

Preamp pedals I have been experimenting with are the Radial PZ-Pre and Tech21 Acoustic DI, I also use the TC BodyRez pedal.

What would you add to your ultimate Acoustic preamp pedal? 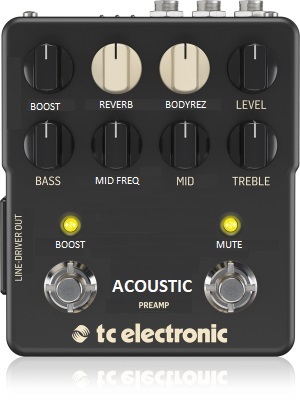 Looks good, but the one I used for gigging could blend magnetic and unbuffered piezo, and that was its most desirable feature for me. So I would like to see features similar to the Baggs Mixpro in this respect. I used a stereo socket on the guitar, and a figure-8 stereo cable to the preamp.

I checked out the Baggs Mixpro...nice and small, but it is missing a Blend or Level mix for each stereo pickup or mic /piezo feed - maybe if it had a dual level adjustment it would make it even more flexible.
I had a Yamaha acoustic with a piezo sensor and internal mic and I was able to adjust level of both and do basic EQ with the preamp on the guitar...but I guess some guitars require that off board.

So if the above pedal had a stereo input with dual level would that meet your needs?
E

add ground lift and phase switch.
Send and return with mono jacks please.
Kick out the body rez (everyone can put one into the loop if needed).
Aone knob compressor instead of that.
Keep it totally analog - digital reverb in parallel please.
A tuner instead of a mute.
9 V power, battery power and phantom power.

Then I will take two.

cowbellfever said:
I checked out the Baggs Mixpro...nice and small, but it is missing a Blend or Level mix for each stereo pickup or mic /piezo feed - maybe if it had a dual level adjustment it would make it even more flexible.
I had a Yamaha acoustic with a piezo sensor and internal mic and I was able to adjust level of both and do basic EQ with the preamp on the guitar...but I guess some guitars require that off board.

So if the above pedal had a stereo input with dual level would that meet your needs?
Click to expand...

I would need something that combined the fishman aura system with a few of the Platinum pro's utility features, and various parametric/graphic eq. And it would have to be programmable, all I could save custom settings for each guitar. And then a di out and effects loop, maybe. A decent reverb is probably asking too much. This setup shouldn't feedback, but a high pass filter, maybe a notch filter or other feedback busting something or other would be neat. And possibly a tuner? And folks would complain without a comp (one knob, please) or a boost. And a courtesy outlet, perhaps? I'm getting silly now.

I have this set up already, but it takes two or three boxes.

The TC play acoustic has it all, except its digital I had the Fishman aura spectrum; it was always on even when the blend was turned down and has no grd lift and the eq controls were lacking. I had the Fishman platinum pro, but it had no grd lift. Both the aura and pro tuners weren't accurate. The LRbaggs venue lacks a good tuner, but it has a grd. lift and the tuner is the only bad thing. The Fishman tonedeq has no grd lift, or tuner, but the effects are good.

That looks like a cool pedal. Maybe make the BodyRez, EQ, and Boost all footswitchable?

I'm a big fan of the BodyRez pedal. I currently use that, along with two Xotic RC Boosters. One for a solo boost, and the other I use when I switch to mandolin to knock off a little volume and treble. I leave the BodyRez on all the time.

I've tried a lot of different things with mostly the same results. I used the TC Play Acoustic for awhile, which I thought sounded great, but it was overkill for my needs. Recently tried my HX Stomp. That sounded pretty good and has a lot of promise. I just need to go in and edit a few things. I think I want to move towards that so I can also mix in electric guitar with our acoustic shows.
Last edited: Aug 24, 2020
L

I've used a Radial PZ-Pre for years, but the new PZ-Pro offers some tweaks that improve on the older design: 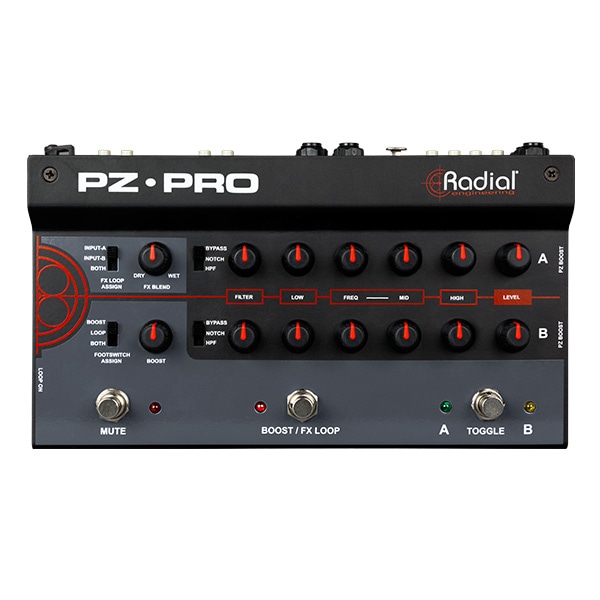 Take complete control over your tone, EQ settings, and effects with the PZ-Pro, a two channel instrument preamp, DI and switcher.

Or a Grace Felix if cash weren't an issue.

If I were to use a preamp for acoustic guitar, it's already been made for me.

Jeff Scott said:
If I were to use a preamp for acoustic guitar, it's already been made for me.
Click to expand...

@Jeff Scott do you own a Taylor K4?
I didn't know Taylor made these. Are they still relevant for newer Taylor guitars? or have other pre-amps caught up with what the K4 could do?

cowbellfever said:
@Jeff Scott do you own a Taylor K4?
I didn't know Taylor made these. Are they still relevant for newer Taylor guitars? or have other pre-amps caught up with what the K4 could do?
Click to expand...

No, I never did own one, but if Rupert Neve designed/built these, they couldn't be anything other than superb.

I would expect the K4 to be relevant for just about any acoustic guitar/pickup.
Last edited: Aug 28, 2020

My Red Eye works good enough for me. I like simple.

definitely the series FX loop, TRS if space is at a premium

if there's no built-in tuner then i don't see much need for the mute button, a tuner in the loop would accomplish that. i vote leave the tuner off, i've got one i like already.

+1 for switching out the bodyrez gimmick for a compressor knob, with a light or lights to show when the comp is kicking in and how hard.

i'd suggest a switching input impedance button ("hi/low", "passive/active", however you want to describe it). most acoustic guitars have their own active preamps, so a regular 1MΩ input is just right. when you do have a passive piezo pickup it probably needs a much higher 10MΩ input, which is what most fishman/baggs preamp boxes have regardless.

Yes to the Effects Loop; I don't think Body Rez or Reverb belong in the preamp. I'd like to see a few Hz marks for the Mid Freq knob.
E

thank you all so much for this thread! It made me think about the perfect rig for my acoustic guitar again.

I totally forgot about the Tech21 FlyRig acoustic, which does everything I need. I will buy one soon.

To be honest the Radial PZ-Pre is pretty much it for me. That thing is fantastic. I use a reverb and tuner too, but I think it's better for those to be seperate as you can pick the stuff you like.
E

The Baggs Venue is my choice for its two sweep EQs, and two fixed treble bands, in addition to all the normal EQ, notch, gain, etc. And it has an fx loop for those who can benefit from that; it's a great DI that has served me well for long time.

Other than this, anything Radial is simply killer (at least IME), and I have no reason to believe that their PZ can't do a superb job, let alone their new Pro model.

That said, a programmable EQ with two or 3 presets you can instantly recall would be awesome for multiple guitars. I use the SourceAudio Prog EQ for exactly this reason. Were such a feature built into an otherwise excellent Acoustic-DI box, that' would be a killer live-use unit, IMO.

This is a fun thread. Thanks, OP! While I’ve been on TGP for a little while at least and often read posts and occasionally reply, I stay mostly in the Pedals and Effects Forum and the Emporium. I’m a LONGTIME acoustic guitar player (and related live audio gear nut related to acoustic guitar), but I’ve been going through an electric guitar/gear phase for the past year couple of years. In fact, this is my first time to even take a peek in this forum, as I know that I already spend way too much time on TGP with electric guitar stuff in the first place!

Anyway, I was immediately drawn to the title of this thread... it’s a fun and great idea. I came in to suggest mix or blend control options for two-pickup or pickup/mic onboard sources... and maybe an option for phantom power... but I quickly saw that those ideas had already been wisely suggested. Seems like the “design” and feature of this mythical pedal are solid and comprehensive.

One idea would be to expand it into being a dual-channel preamp, allowing separate EQ controllability on each of the two signal sources before blending them together. And I think that idea was also essentially brought up.

I can say that, from my own experience with playing acoustic guitar live for many, many years... and finding a “Swiss army knife” tool that offers the acoustic guitar player a lot of options and tweakabiiity for achieving a good live sound... this is huge. For several years, I used a rack mount Rane AP-13. Great unit but the EQ controls, although in dual-channel format, were graphic... and as hard as I tried, I could never really dial out a shrill harshness to the overall sound. But then I lucked into an incredible deal on a used Pedulum SPS-1, and it was all over. I had been looking for one for years, but given that I was in a never-ending stint in graduate school with not a lot of disposable funds at hand, I never thought I’d end up with one. But once I did, I never looked back. My GAS was finally cured after a long and sometimes painful bout with it. And that was 20+ years ago!

Even these many years later, with all the preamps and processors that have come out since then, I’ve never seriously thought about replacing imy SPS-1 with anything else.

BUT... I HAVE found myself occasionally wishing I had something in a pedal format rather than having to lug around and set up my rack case that contains my SPS-1, a rackmout tuner, and a multi-effects processor.

But if you were to essentially get everything the Pendulum SPS-1 provides (and at the audiophile-grade level of quality that Pendulum Audio products have always been known for), I’d be first in line!
Last edited: Sep 5, 2020