Do you ever feel like selling it all and starting over?

I've been trying to be content with my gear setup for some time now, but I can't stop the feeling of wanting to start with a clean slate. Sell the pedals, amps, even the board itself. If I did I would try different brands than I'm used to or totally different setups just for something new.

Anyone ever done it?

I just need a crappy little nylon guitar when the apocalypse happens. And a Kyser capo. Maybe bring my overdrive just to look at.

I did it in 2002. Sold everything and stopped playing anything until around 2015 or 2016.
I sold every single music related thing I had and didn't even touch a guitar for over 12 years. I'm slowly rebuilding my gear and taking my time.
S

not at all. right now i am the most happy with my rig than i have ever been. plus used prices and shipping prices are both insane right now and you can barely find anything so that sounds like a nightmare.

I might have to do it when we move. I’m stressing over selling my stuff but it would be fun to start all over again. I’m not even sure what I would want!

I would have to keep a few instruments that I’ve had for 45 years.

Every time I start that exercise I end up regretting it.

I did it two years ago. I didn't get rid of everything in one go, but I replaced the whole rig in a year. First I got a different guitar, then a different amp, then I changed the whole board. Including the board, because I made one.

Let’s meet up to play some rock music in Phoenix!

I’ve turned over a lot of gear. There’s no substitute for trying stuff to see if you like it. I’ve taken a lot of flyers on stuff because it looked interesting. Especially used stuff where I could mostly get my money back out of it later if I sold it. I’ve had some nice surprises. It’s all a big jigsaw puzzle as there are so many things in a signal chain that have a bearing on your sound. These days I’m mostly just guitar into amp and exploring the vastness of all the controls on the guitar and the amp. I’m getting near the end of my gear journey as I’ve discovered I mostly just like Les Pauls and Teles and an assortment of Mesa and Carol Ann amps. It’s going to be hard to get better stuff and not likely worth the time.

You might find watching some Rig Rundowns of interest. They can be very insightful as to how a wide variety of working pros think. I wasn’t surprised when I’d see a guitarist with a bunch of different guitars, numerous amps and lots of effects. But I was surprised to see some really good players that had a main guitar and amp setup with few effects. The one that really threw me for a loop was Angus Young. He mostly plays only three SGs, all the amps are Marshall Super Leads and his only ”effect” is the pre-amp on his wireless system. They also have these Kikisui power units that regulate voltage to it’s always exactly the same. That’s some serious focus on something, a singular thing, that works really for him.

My guess for you is to try some new (to you) equipment to see if it inspires you and be at peace selling the stuff that’s less inspiring. I wouldn’t worry about pedals until you’ve found a guitar and amp combination you like. You can build from there.

I've done it a couple times. Basically if I start going through my setup and replace 3 or more pedals then I decide to take the whole board apart and reassess, see if my tastes have changed, see if there's anything that can do the job better, etc. I'm in the process of starting over with a new board right now.

I got rid of most of my pedals and now have a bunch of awesome amps. Having way more fun with the amps.

AcceptableNorm said:
I did it in 2002. Sold everything and stopped playing anything until around 2015 or 2016.
I sold every single music related thing I had and didn't even touch a guitar for over 12 years. I'm slowly rebuilding my gear and taking my time.
Click to expand...

I did exactly the same thing around the same timeframe. Sold almost everything for a down payment on a house in 2001, starting playing again in 2014 or 2015. I now have a hell of lot more gear than I did then, but a lot less than I did when I had a touring band.

It definitely is a stupid username

I did a full pedalboard overhaul, going from a mostly full PT Pro to the Fractal FX8. I kept my wah and tuner; everything else was sold at the time. I didn't change amps or guitars though. 4-5yrs later decided to rebuild a pedalboard....70% of what is on my new board is a repeat purchase (in some cases new versions of an older pedal I owned).

I sold it all and moved to an Axe FX. I was buying and selling pedals every week for like two years. It was a problem. Moving to a modeler has been one trillion times better for my creative workflow. No longer do I waste hours researching pedals and watching demos ("Does this slightly different sounding transparent overdrive sound better than the one I already have?"). No longer do I have to deal with setting up MIDI each time I get a new pedal, or worry about changing settings on pedals that don't have MIDI, or tap-dance to change active pedals during a song.

I make a preset in Axe Edit for every song I write. I set up a different scene for each section of the song, depending on how I want my guitar to sound. Easy.

I could never go back. I got so hard into pedals that I realized I didn't want them anymore.

I've had several episodes of this and did act on it one occasion early 2016 when one fine morning I was playing and suddenly did not like my tone anymore. Have to note I had all rack-mounted solid state power amps paired with tube/digital preamps that included software driven modeling stuff plus cheap & less efficient speaker cabs. Most of that gear was close to 30 years old and I suppose I had finally reached my breaking point of wasting all that time chasing tone and tweaking endlessly instead of truly playing and improving skills.

Within a week's time I sold everything except my guitars and started looking into what was out there, I was out of the know for a very long time, I never did keep up with trending musical gear all thru the years, how in fact it had changed a bit was a shocker for me when I did start reviewing where to begin. I wanted to finally try out tube amps and get back to putting the FX back on the floor which in my opinion adds a more personal experience to them than some stale linear program coded in some audio lab.

Without getting into all the details of what I discovered on my quest for tone and not admitting to the actual amount of time (and money) spent buying, trying, returning, flipping thru so many FX Pedals & pedalboard configurations, amps & speaker cabs, etc since then...I'll just explain it all in a recent picture here.

There's my experience in a nutshell. Started in 1977 when I was 13 and still at it but in a far better place gear wise and much happier now! 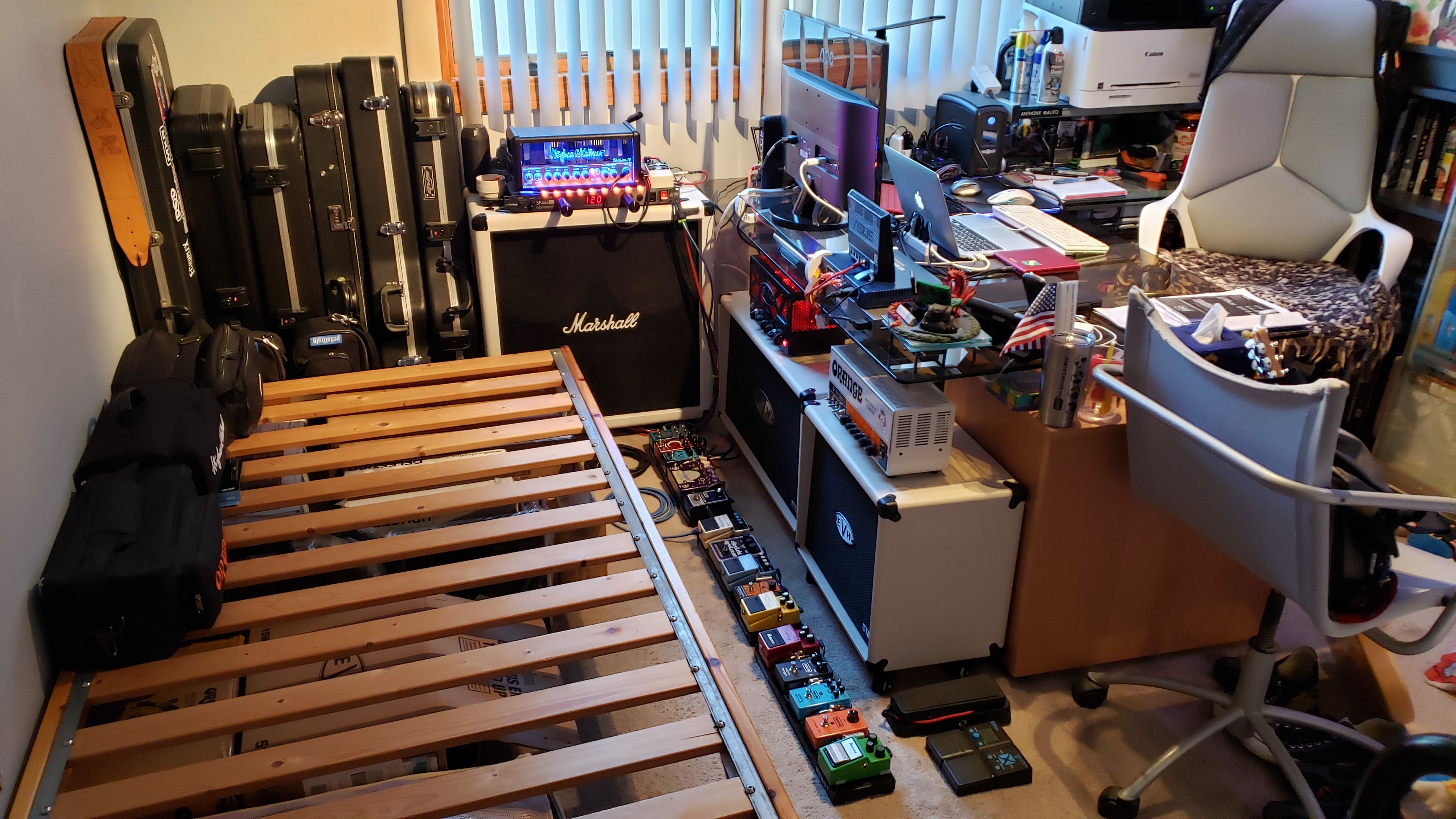