Do you hang on to a guitar only for sentimental value?

I have a 78 or 79 tele that I have had for about 14 years. I bought it for $800 in the early 90's. I bought it because it felt grat and played great. Over the years I have modified it trying to get different tones. I barely play it now because it just doesn't sound quite right now. When I bought it I was playing in a locally successful original band with one of my best friends who was the singer. The singer (my friend) died tragically a year or two after that and the band ended.

In the past, I have gone through lots of amps and guitars looking for tones. I typically don't hang on to anything I'm not using. however, I can't bring myself to get rid of this guitar even though I'm not using it much. Anyone else hang on to a guitar you don't use?

I currently dont have anything with that much depth as far as history, but if I did I would hang on to it. For example if I still had my very first guitar, I would never sell it. I was young (14 yrs old) when I sold that cheap Strat but man do I regret it now.
M

Absolutely, I have several actually, a PRS my dad bought me when I was about 16, I lusted after that guitar for years and my pops spent ALOT of money that he didn't really have just for me! 9 yrs later, I very rarely play it but won't part with it because of the sacrifice he made for me. Hang on to it, you never know you might come back around to it.

Guilty, I have two like that, one I rarely play but it represents a wonderful time in my life.

I have a couple that I hang on to just because. One is my first guitar, a '93 Yamaha that is an Ibanez copy. It's been beat up, thrown around, abused, and it still works and plays nice. My dad got it for me, and I'm planning on giving it to my son.

I do; it's a pretty useless Fender Lead II since the truss rod is frozen, but my folks got it for me when I was 17. Probably the only time my dad ever bought anything at a music shop; he died about 2 1/2 years after that, so it's special to me for the memories.
H

I still have my first instrument. A 70's Electra bass.

It's strung up and sitting in a case. I haven't touched it since before I sold it. It needs work and it's not worth it.

I bought a couple of duplicates of my first 2 guitars a Teisco Del Rey and a Kapa 500, I rarely play any of them and got them for nostalgia and still have my first Silvertone acoustic.

Yes, my first electric guitar was a MIJ Fender Strat with Kahler trem. I hate the Kahler trem...if only I had a time machine to go back...

From what I've seen, the market value is about $300 at best....but mine has heavy fret wear. So, it doesn't seem worth it to me to try and sell it. It rests in a nice case in my closet and comes out every once in a while.

Yes, I still own my first guitar that I purchased. Gianinni acoustic from 1974 or 1975. I purchased it used in 1989 (IIRC). I had my tech make it playable a few years back. Before I purchased that I played my father's Goya nylon string acoustic from the 60s. He still has it but it's essentially mine.

Yes, I have 2.
A 61 Epiphone Century that was my first electric guitar in 1967, thinline hollow body with awesome triangular neck profile and legendary Epi "New York" single coil pickup. My luthier describes it as "fragile' so I don't take it out to gigs and it doesn't get much play anymore but I can't part with it.
A 75 Tele Custom that belonged to my best friend of 30+ years. We roomed together in college and played in a number of bands together over the years. We suffered through each of our lives traumas together and were always there for support. He became an alchoholic and passed a couple years of years ago. I'm not a tele guy but he could sure strangle loads of Roy Buchanon and ZZ Top tones out of that guitar. When I got it, it had been unplayed for a few years and was a rust bucket. I had it restored. It has so many memories that I just have to keep it. I have the original receipt with my then phone number on it so I could pick it up from the store after it was set up.

Still have my old '76 Ibanez Rocket Roll SR that I bought brand new. Don't play it anymore because I just don't like V's these days, but it's my first good guitar and carries a lot of memories...just recently started thinking about selling it, just so it would be played again.

Mr.Hanky said:
Guilty, I have two like that, one I rarely play but it represents a wonderful time in my life.
Click to expand...

+1, I have two I will never part with because of their backstory.


BTW that Telecaster in the opening post oozes awesomeness.

My first "good" guitar (this was back around 1983, or so) was a Gibson Sonex-180 Deluxe, a bolt-neck MDF Les Paul-shaped thing. It may not sound that great on paper but it played and sounded fairly decent. A couple years later I got a Tele that became my main guitar and I sold the Sonex (or "Stonex" as one of my bandmates called it, given its weight) to a friend from college. Six or seven years later I visited him during a road trip through his town, and he still had the Sonex, but didn't play it much anymore, and I bought it back from him. It had led a rough life in the interim: aside from lots of miscellaneous wear and tear, it had a crack in the headstock and a big Grateful Dead sticker on it. I cleaned it up and played it a bit; for many years I left it at my parents' house to have something to noodle on when I visited. Finally a few years ago I retrieved it, got the headstock glued up, and gave it a fret leveling, a new nut, and new bridge saddles (the originals were pot metal and were literally wearing away). It now plays better than it ever did, and indeed it's one of the slickest-playing guitars I own. On pure merit, I don't really need it, and I've thought about selling it, but it's a beat-to-hell example of a relatively unpopular, obscure guitar, and given its history it's worth more to me for nostalgia than I could ever sell it for.

About ten years ago I picked up an Epiphone Korina Flying V. I'd always loved the look of Korina Vs, and it was a really nice playing and sounding guitar, but I never really played it that much. But when I talked about maybe selling it, my wife actually told me to keep it---it's one of only a couple of my guitars that she actually likes. So I guess I'm going to hang onto it. I suppose I will bite the bullet and engage in some upgrades. It could use a new switch and tuners, and I suspect a set of Gibson '57 Classics would sound great in it.

I've also hung onto a bass that was played a starring role in one of my most productive musical periods---an old Gibson Ripper. Actually I still love how it plays and sounds, but for long-term viability it will need new frets, and I just haven't brought myself to make that investment in it.

A 1993 Gibson Les Paul Studio given to me by my father. I have never bonded with it but I'll never sell.

No doubt. I still force myself to play them on occasion but really I could get by with just my main strat.

My first bass was a 71-ish Gibson EB-0. When I got it, the headstock had already been broken off at least twice. I routed it out for some P pickups, and it always sounded like poop. Headstock kept breaking off. Kept routing it for different pickups. Kept sounding like poop.

The only reason I hung onto it is because it's so easy to play and because I really learned to play bass on it. It always sounded like poop.

Then a couple of years ago I started working in a project that required *THAT* sound. It's not like you can roll off the highs on Jazz Bass and make it sound like an EB or other short scale bass. I barely touched that thing in 15 years, and now it's probably my most played bass. 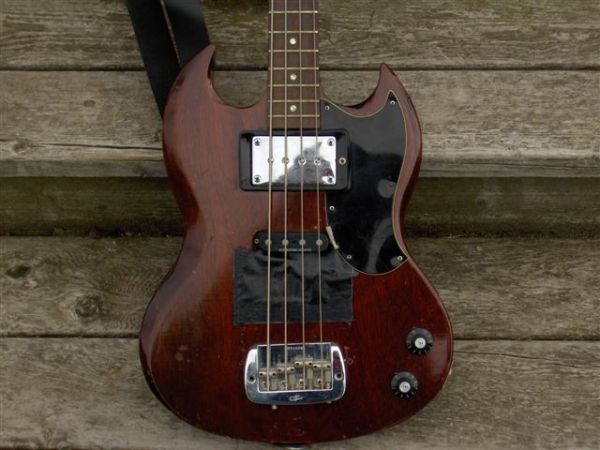 The first guitar that I played on a regular basis, was a guitar that my girlfriend took from her husband before they divorced - a 64 or so Gretsch Corvette - not a particularly good version of a pretty mediocre guitar. I traded it and a couple hundred $$ on a 1990 Gibson ES-295. I will keep that 295 around for a long time.

The first guitar that was MINE, an '88 Squier strat that I won in a radio giveaway, along with backstage passes to see Robert Cray. He signed the guitar (as did Albert Collins, Buddy Guy, Dave Alvin). I changed the neck, pickups, pickguard, and don't take it out and play it, but I'm also not selling it.

Finally, my first good tele. Bought second hand in 91 or so, turns out it's a very early 52 RI. I used to play that guitar quite a bit, it's got some road miles on it, and is very comfortable. It doesn't get much gig mileage these days, but is also not going anywhere.

I rarely play my PRS anymore,

Its old and i modded it a bunch. Sounds great, and is a great guitar in general. It usually stays on the stand. I also rarely play my D'Angellico, or my first guitar. I mostly play my two Parkers and my Alembic, and my Breedlove.