Do you use more than one guitar when gigging?

In my younger days I changed guitars a couple times a set. Always had a strat, a flying V and a P90 LP Special. After some time, I still brought at least 3 guitars but would only switch between sets. I recently started playing bass for 75% of shows with a new outfit and this thread reminded me I really need a backup bass.

I always bring at least 2, even if I plan to use only one (I never gig without a backup guitar). If warranted I’ll have multiple instruments plugged in and switch with A/B, but if there is time to unplug I just do that. I always mute with tuner mute when I unplug.

I bring two. One is a backup in case of a string break or other issue. I just kick on my tuner pedal if/when I need to switch.

One main electric. A second electric if I break a string. Just kick on the tuner to mute things and swap guitars into the same cord. Also acoustic through its own DI.

I bring a backup that I’ve never had to use. When the band is active, we might play twice a month at most, but usually no more than once. I’ll put on fresh strings. Never broke one during a show, rarely break one anyway with the current state of my guitars. I hate having to lug that extra guitar but I’m sure I’d face bad luck the first time I leave it behind.

3 electrics and an acoustic. Step on the Turbotuner, which kills the signal, swap guitars, tune and step it off and good to go.
L

Strummerfan said:
I always brought two. I would mute my system with a tuner pedal to unplug, check tuning quick and go. Never took long, and my singer would say a few a words while I did it to keep the crowd busy.
Click to expand...

This. When I used to gig, I usually had three guitars: a Strat, an SG or LP, and an LP tuned to open G and set up for slide.

In my bar band I just use one.

In my Floyd act there are a number of guitars I have to play in each show, with wildly differing pickup output levels.

In that case I had my tech build me a multiple-input box. Each input is selectable and has a volume control, and there is a VU meter to help get things dialed in in soundcheck. It’s actually quite genius.

The lap steel is hardwired in, but the other guitars all share the same cable so I just roll off the volume pedal for my rig before I unplug.

I usually tote between 3 and 5 guitars. I play standard tuning, baritone, slide, sometimes lap steel. I just unplug. Sometimes I mute the signal, sometimes not.

sleewell2 said:
i bring 2 but only switch if there is a string break or other issue.
Click to expand...

No gigs for a while now, but in my old covers band I had one HB guitar and one SC one, and switched according to the song with a tuner (last in the chain) as a mute. I could get through using either if necessary, so each was the backup for the other. Did a couple of gigs with more, but I found it cumbersome.

In the originals bands I’ve been in, I generally found one guitar that is the sound for that band, and had another as close as I happen to own to it in sound, output etc just as a backup. Except in one, where I switched between guitar and a Bass VI.

Towards the end of the before-times, I had a Boss WL-50 wireless, and that made changing easier as the transmitter bug auto-mutes when removed.

Having tried to change a snapped string on stage in my youth, I don’t think I’d like to play a proper gig without a backup.

My main Variax gets me through an entire gig, including acoustic and alt tuned songs. I bring a 2nd Variax in case I break a string.
M

Yes, often. On many duo gigs (where I use a Helix) I go from acoustic to electric. On band gigs (with pedalboard and an amp) I'll sometimes switch to an open-tuned Tele. Either way, I just use the tuner mute and swap the cable (I have a Helix bank just for acoustic).

The only reason I'm chiming in is to share a suggestion I got from someone here: get in the habit of putting the cable plug in your back pocket when swapping guitars. Otherwise you'll eventually wind up swapping on a dark stage, and if that cable end is "somewhere" on the floor, you'll have some very stressful moments feeling around for it while a drummer is saying, "1-2-3..."
Last edited: Jan 20, 2022

I only bring one guitar to a show.

I always have a backup on hand when I gig. I rarely break a string but when I do, it’s always at the worst possible moment. If there’s a problem, I mute my rig using my tuner and swap it out.

I occasionally bring a third if I’m in an alternate tuning but my VG Strat mostly covers that nowadays.

method on board to silence signal -
Tuner.
Volume pedal off.
Loop or A/B type route.

I like to be able to unplug without making *that* noise.

A player who collects

I play in three different bands and always bring 3 guitars. For my classic rock band, I generally bring one single coil, one humbucker and one fun/pointy one. I usually play the single first set, hums second set and close with something fun. But I also break strings like a madman. Like this: 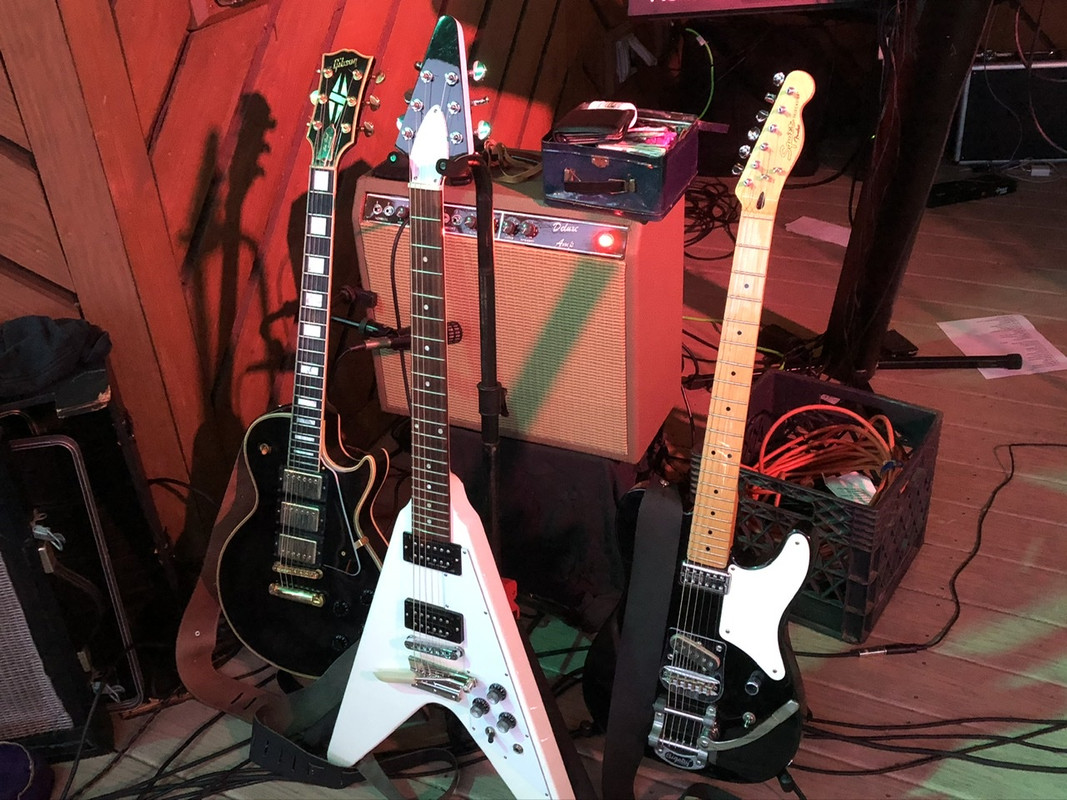 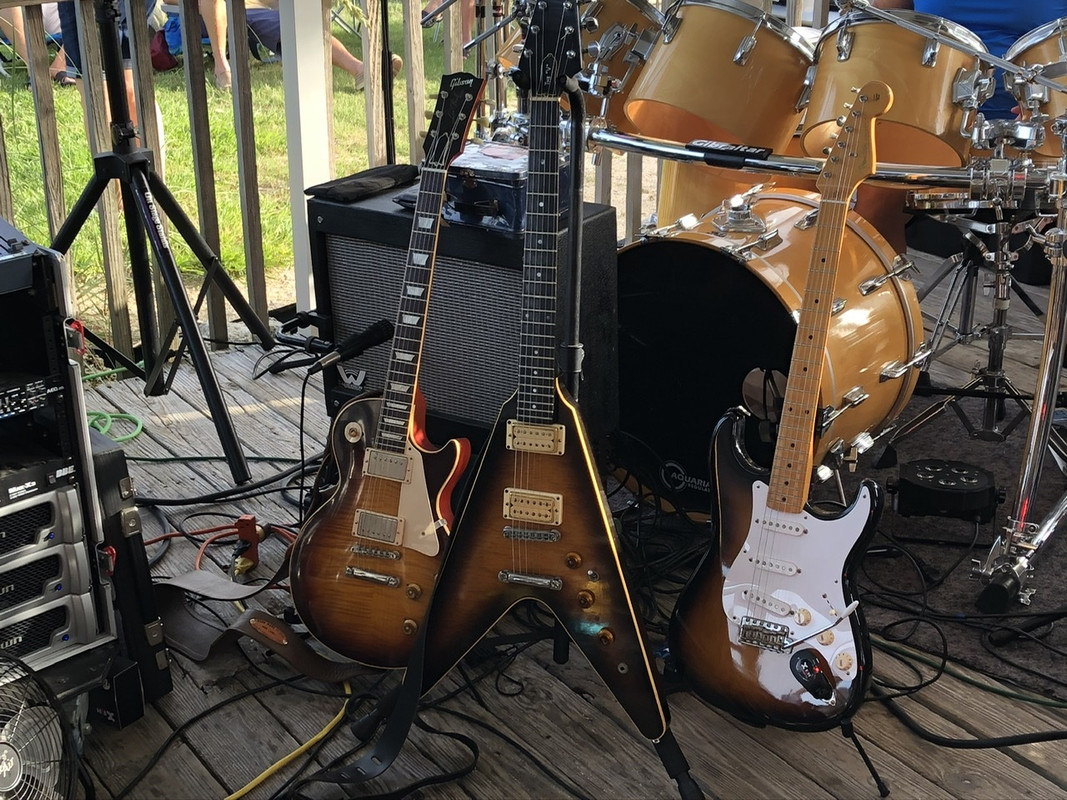 For my (mostly) acoustic trio, I bring a 6 string, 12 string and a hollow body electric or dobro: 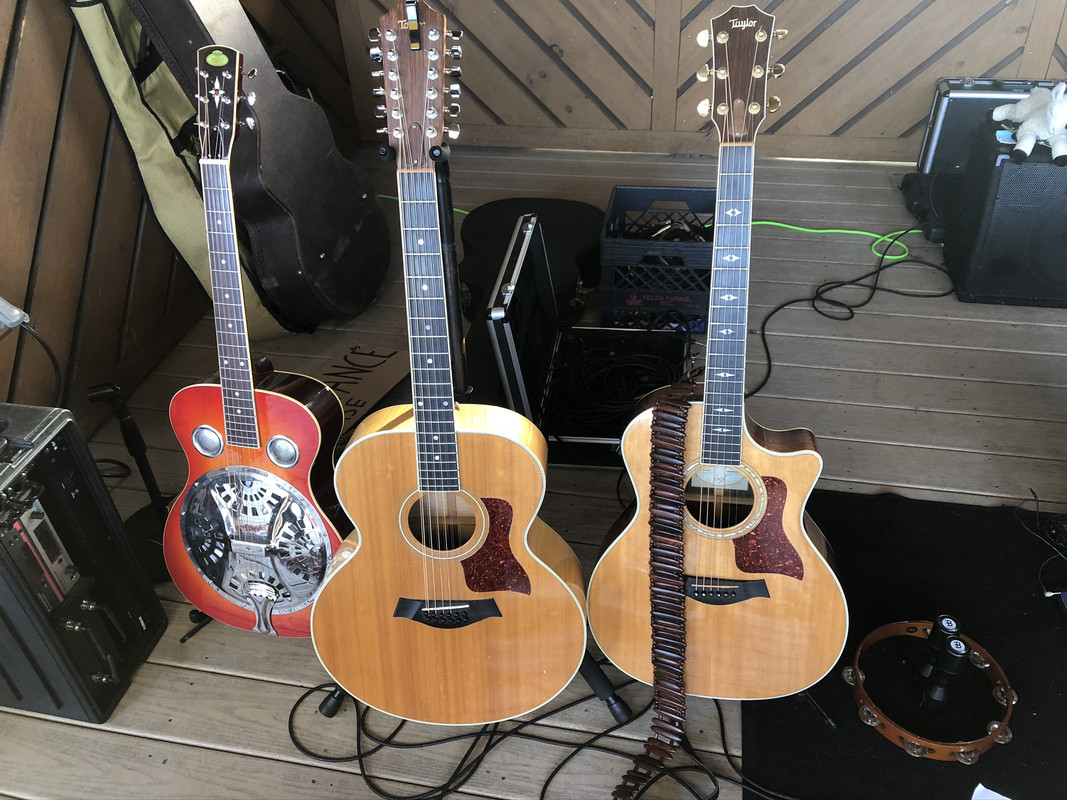 I just joined a Beatles tribute band (doing John). Last gig I brought a Ric 330 for early stuff, an Epi Casino for later stuff and a 6 string acoustic. The other guitarist brought three as well - a 12 string Ric, a hollow Gretsch and a Strat. I’m looking to pickup a EJ-160E to use in place of my Taylor acoustic.

I have wireless on each of my three pedal boards; mute with the tuner and swap the wireless transmitter. I can switch in seconds.

I play in open G sometimes, so I may bring a 3rd for that, or just forego one of the others. It depends on how long the performance is. My Tele has a B bender, so that factors into things.