Since starting out in jazz I always wanted a golden era acoustic archtop, and the model I thought was the most beautiful was the 17" Epiphone De Luxe of the late thirties. I located one in Paris during the summer of 2020. Almost a done deal, but then COVID happened and I could not travel. This summer the prospective seller texted me, and after some hesitation I arranged to go. Actually not the seller: the wonderful Romain Vuillemin, without whom the deal would not have been possible. Check out his YouTube channels if you like swing and archtops!

More in detail: the guitar is the best musical instrument I've ever played. It plays wonderful, sounds wonderful (both acoustically and electrically), and looks wonderful. The neck is a supremely comfortable big soft "V", straight as an arrow. The fretboard is also extremely comfortable, with a 1 11/16 nut. The sound is sweet and strong, with impressive note separation – almost lute-like, when you play above the end of the fretboard. There is an impressive evenness to the notes, and no dead spots, wolfs or buzzes all along the fretboard. A paragon of "quality". While playing it you don't have the impression that it's terribly loud – the '34 16" seemed louder. But as I was sitting in front of Romain playing both guitars I realised what an extraordinary projection and dynamic capabilities my '38 has: all that Romain would give it with his strong right hand, she would give back without ever getting shrill. Sitting close in front it was so loud. Last thing: it's surprisingly lightweight for such a big instrument.

The Adjustable Rhythm Chief it came with is an interesting middle ground between my FHC and Rhythm Chief 1000: hotter than the 1000, but a little more refined than the FHC. I've had to learn how to dial it in with tone and volume – doesn't work like my others – but it has wonderful sounds in it. Indeed, unlike the FHC it works very well with (while responding differently to) all my main amps: black, brown and octal.

Nerdy stuff:
- as stated, the fundamentals are strong: a fantastic neck and a sound sonorous body devoid of any cracks or repairs. To me this is all that matters.
- some appointments have been replaced (inlays – all but one I think; frequensator; most likely the body binding). We never discussed this but the frets seem far too pristine for an 83 yo guitar, I am thankful that the job was made so well and without ruining the binding. The bridge is (uncharacteristically) the original one.
- It's an open question whether it's a refin. I have no horse in the race as I don't mean to ever part ways with this guitar so could not care less about its market value, but I'm of course intrigued. The only thing I'm positive about is that it's very old, well-worn finish. The owner, based on the idea that Epiphone introduced blondes only in '39, thinks that it was refinished right that year or shortly thereafter, after the owner realised he liked blonde guitars better. Nice theory. I'm not sure. Epiphone made blond an optional finish for its top models in '38 already, and as Romain pointed out to me the back is highly figured and would more naturally be used for a translucent finish than for sunburst. His '39 burst Emperor had considerably plainer wood. All in all, I'm inclined to think that it's a factory blonde.
- she came with a very old and beat-up (but sound) case. I have no way to tell whether it's the original one: over 83 years so much can happen. It certainly is period, and it fits the guitar like a glove. Epiphone would introduce the € marking in cases only on the following year so it's absence is not relevant.
- she's from when Epi Stathopoulo was still around the factory. For some reason this matters to me.

I've been living symbiotically with her since acquiring her last Tuesday. I've played it every day, had a rehearsal (wow), today full set-up, and first gig on the 30th. What a marvellous instrument. 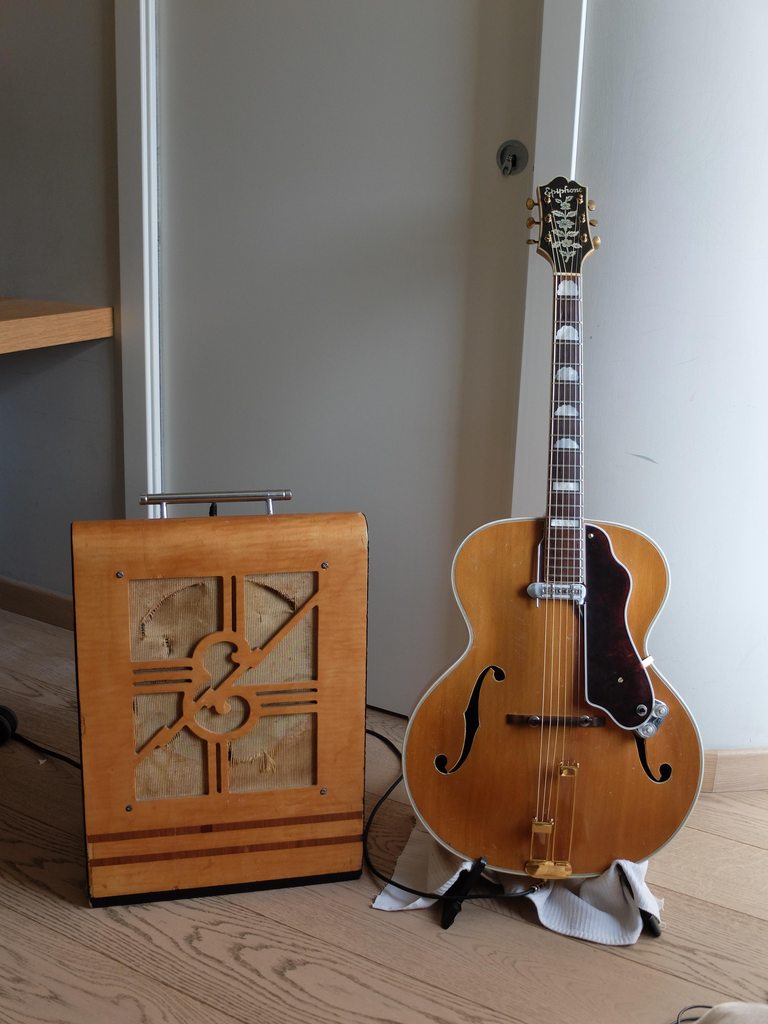 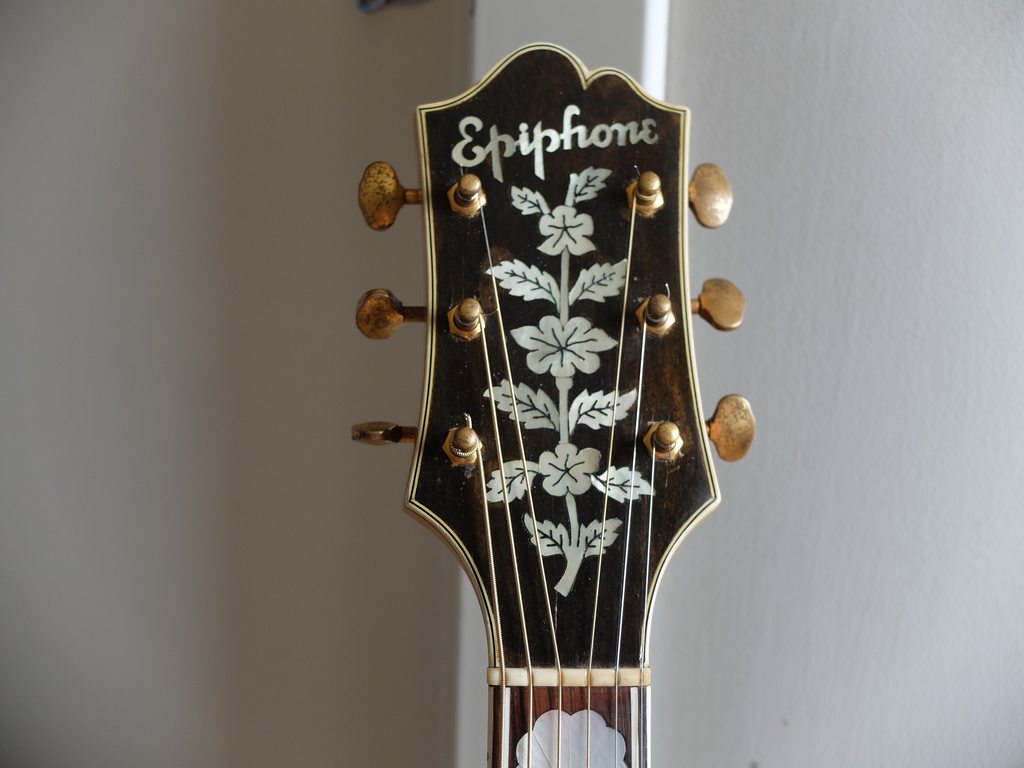 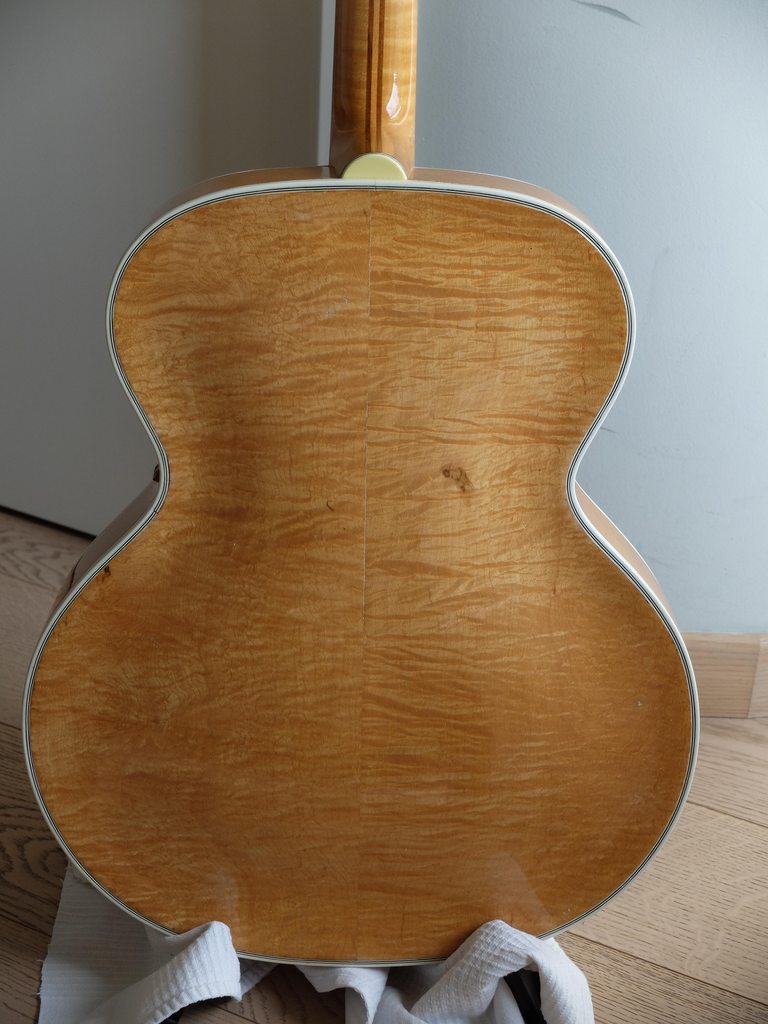 Love it! enjoy it in good health

Nicely done. The original Epis had the magic.
Now, post a pic in the vintage Epiphone thread.

Tell us more about the amp too!

Love that pairing. Love the cloud/fan inlays of those Epiphones.

great combo - I am so happy for you !

-> my Epiphone Amp is at the 2nd technician, who f'ed it up completely, it does not work at all

anymore at this point.

up to the 3rd technician then, who is said to be a true professional.

telephone said:
Nicely done. The original Epis had the magic.
Now, post a pic in the vintage Epiphone thread.
Click to expand...

Did not know it existed! I'll look for it and post there for sure!

swlees said:
Tell us more about the amp too!
Click to expand...

-> my Epiphone Amp is at the 2nd technician, who f'ed it up completely, it does not work at all

anymore at this point.

up to the 3rd technician then, who is said to be a true professional.

The amp is a 1946 Zephyr. Zephyrs are the hidden gem of the octal amp world. They do not have the "star factor" of the EH-185, nor the reputation of Fender tweeds, and so cost relatively little. And they sound magic – both with old archtops and with strats and teles, I find.

But as @Filmosound 621 tells us, they're not easy to service because they are so archaic. My amp tech, who is a great one, needed a couple extended trials to get everything under control and working well. You need to find a tech who is truly passionate about vintage gear. @Filmosound 621 : have you tried vintage radio shops and repairmen? These amps were, indeed, big radios and radio techs and geeks tend to know the technology much better than persons working on modern (i.e. post-octal) guitar amps. Here's to hoping your Zephyr will be back up and running!

Bucky Pizzarelli had a thing for old Epiphone DeLuxes. They were his favorites along with a faithful DeAngelico and his 7-string guitars (Gretsch, then Benedetto). He started out on one (exhibit #1) and in his later years acquired a '38 blonde that is close kin to mine (less than 100 serial # younger, but with a swapped-out tailpiece from a couple years prior; exhibit #2 … the expression of pure joy in the picture always moves me).

I discovered days ago that the '38 was the guitar he used exclusively for the record "5 for Freddie". If you'd like to know how a '38 Deluxe sounds acoustically, this is the best document I know. Needless say, the playing is wonderful and a bona fide textbook of rhythm 4/bar and chord melody:
Hope you enjoy a little good-natured swing! 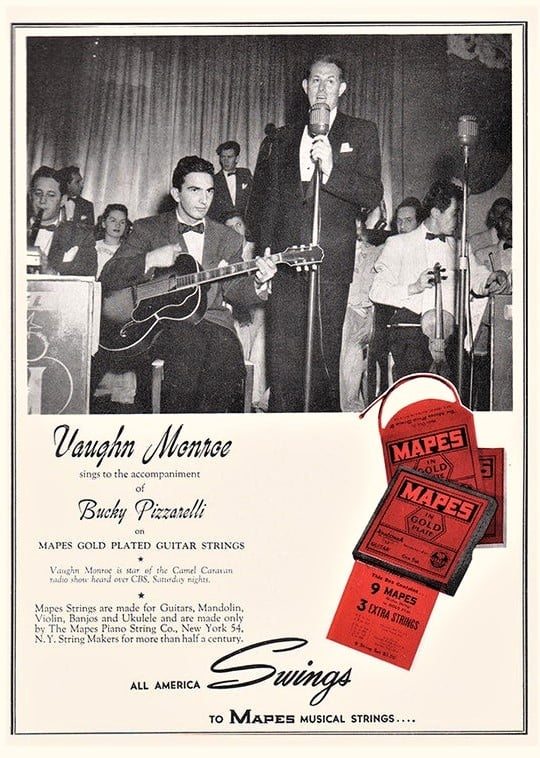 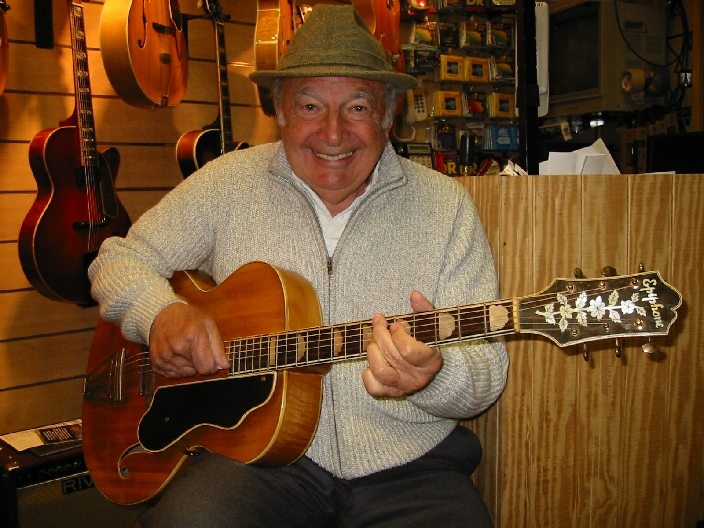 That is some major pertyness right there. Nice

Wow! What a pair. That is about as cool as it gets.

I saw this one for sale. Congrats on the purchase. I loved Romain music so much, but he's very strong using 13s on his guitar. Do you also play jazz with 13 strings? Wish I can play jazz to justify purchasing beautiful big archtop like that. Again congrats the guitar is so beautiful

bibir said:
I saw this one for sale. Congrats on the purchase. I loved Romain music so much, but he's very strong using 13s on his guitar. Do you also play jazz with 13 strings? Wish I can play jazz to justify purchasing beautiful big archtop like that. Again congrats the guitar is so beautiful
Click to expand...

Hey bibir! I use 12s on my archtops and 11s on my Fenders. I tend to like substantial strings for their feel and because they balance better with the single coil pickups I love.

Romain also had 12s on this one. Regardless, he's way louder than I am. Listening to his right hand IN THE ROOM is a different kind of experience!!

Not bad for a vintage Chinese import

Very nice
GL and enjoy it

Uh oh, now it's got a companion gigging amp… https://www.thegearpage.net/board/index.php?threads/nad-57-custom-pro-amp.2293427/

Wow. Congrats. That’s beautiful and in such great condition. Looks like it’s really been cared for.

Badstrat said:
Wow. Congrats. That’s beautiful and in such great condition. Looks like it’s really been cared for.
Click to expand...