I've had an Echolette waiting for a repair for quite some time now, but never found the time to take care of it. A couple of days ago, I was offered a second unit, supposedly wrecked, to scavenge some parts. Upon checking, it appears that, although it's in much rougher condition than the first one, it seems to be a little bit more functional.
Here's a quick description of both units :

Neither one seems to have been properly serviced, as everything looks original inside. Except on unit 1, addition of a grounded cable and replacement of the channel 3 DIN input by a Jack.
Both are early units, pre-1963, entirely point-to-point.

Unit 1 :
- preamp section is working perfectly, no hum.
- the motor works at both speeds, and the tape seems to run smoothly
- the echo section isn't working. At best, it produces a ring mod like artifact. Turning knobs for the echo's volume, duration and tone affects the sound. Turning knobs for each head's volume doesn't do anything.

Unit 2 :
- Preamp section is working, but has more hum than the other unit, and the tone control of channel 1 doesn't work.
- Motor runs smoothly at slower speed, but runs backward at fast speed.
- The echo works (at slow speed only, of course), but is noisy, due to microphonics (it picks up the motor's noise) and possibly static. And the echo duration control does nothing. The push-pull section of the pot works though. So the echo has actually only one repeat per head, or two with the pot pulled.
- Worth noting also that the repeats are clear, with no pitch shifting issue, so the tape runs smoothly it seems.

At this point, I'm not sure what I should do. Both units seem fixable, so scavenging the parts of one to feed the other sounds a bit like a waste of nice vintage gear.

The unit 2 seems the easier to start with. I suppose that :

But i have no idea of why the motor is running backward at the fast speed setting. Any idea of what could cause this behavior? The wiring in the two units seems identical (and original, from what I can tell).

Also, what should I look for about the reverb duration issue?

As for unit 1, I suppose that it will be more difficult to diagnose, with the heads possibly beeing in need for replacement, so I guess I should either drop it to a qualified tech, or resell it in its current condition, as I don't need two of them anyway. 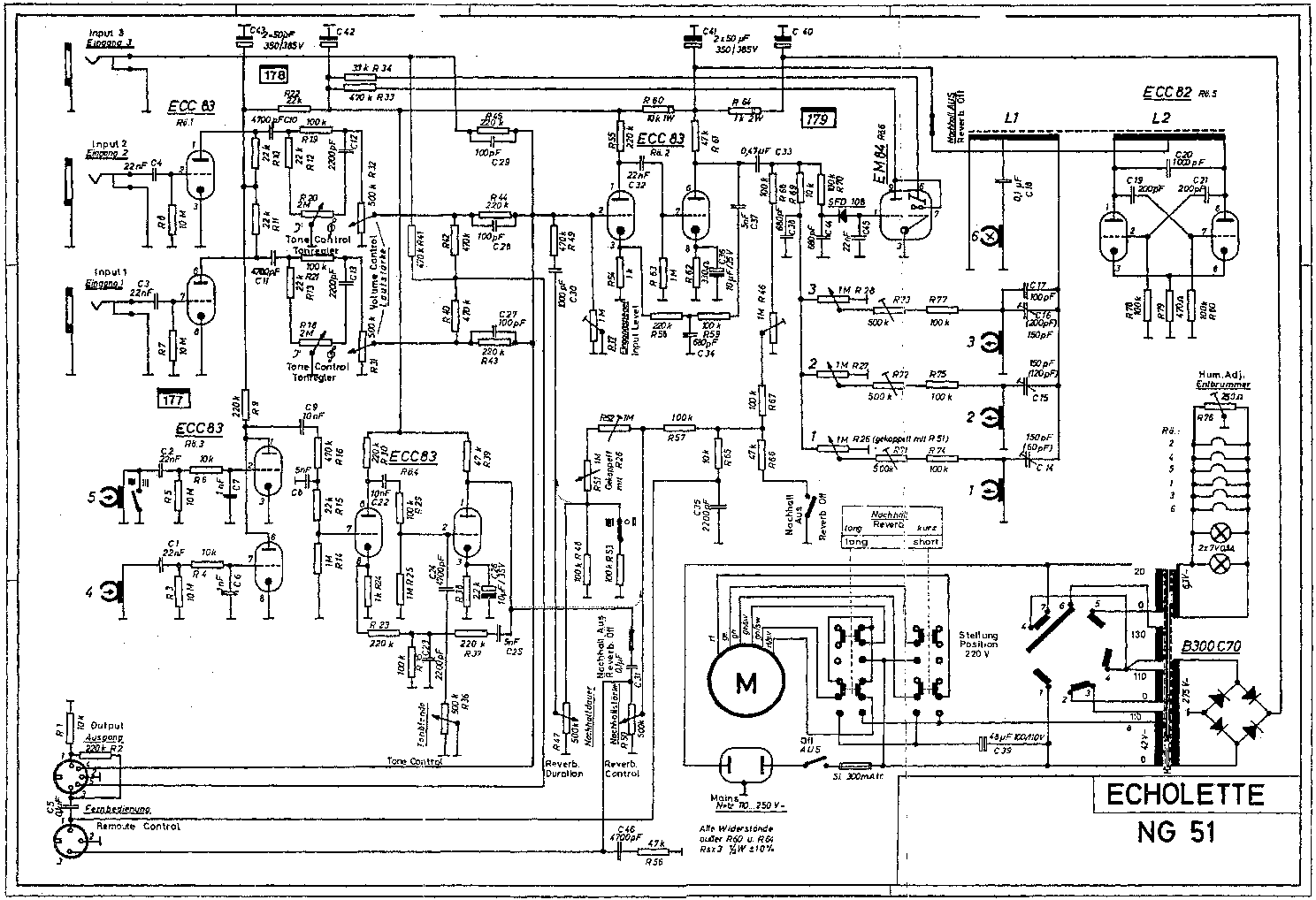 I'm no tape delay whiz, but is the bias oscillator running in unit 1?
H

The bias oscillator is the ECC82, with L1 and L2, am I right? How can I check if that part of the circuit is running properly?
Last edited: Jul 9, 2020

That would probably best be checked via a scope.
H

Ok, I'll have to go borrow one from a friend, so it will take a couple of days before I'm able to check that.

As for the motor running backwards on the other unit, could the 48uF motor run capacitor cause that if it went bad? I can't see evidence of the wiring having been touched, so a bad component is likely I guess.
H

I got the unit 2 working properly

I'll leave unit 1 alone for now, these things are a pain to work on.

However, I'm thinking about building a NG-51 preamp in a more convenient package for live use. Not meaning a pedal, but a lighter/smaller box, jack inputs and output... This is the best preamp I've ever heard, and especially the only one that doesn't make the amp overloaded by low frequencies when I use a Barcus Berry pickup on my old National's.

Looking at the schematic, am I correct that the preamp is only the first gain stage followed by the tone
and volume controls, so only 1/2 ECC83 per channel ?

I think I figured my mistake. I forgot I use a 3 pin Din cable, so basically I have nothing connected to pin 5 of the output connector.

So, that would be my signal path? Thank you so much for checking!
H

No idea, as I haven't played an NG51, and haven't burned enough brain cells to grok their plan. The whole "Reverb" thing appears to be Echo regeneration if the Record/Playback was functioning.

Beyond that if you want to kill functions by unhooking stuff you're just gonna have to try it & see what breaks.

That was not the idea. I've painstakingly brought one of the two units to working order (and given up on the other ).

What I'm trying to do now is to build the preamp only, for dedicated use with my old National's resos (though I might end up using it for everything in a live setup).

Part of the motivation to do so is that I have all parts available, so it will be a no cost project.

Anyway, I'll try without R57 and see how it sounds. Like you noted, it probably does nothing if the Record/Playback is absent.

BTW, you should try to play a NG51 or E51, if you get the opportunity! The schematics is the perfect recipe for headache, but the tone of these (even disregarding the echo functions) is just incredible.

I would expect the output/buffer to be the main stumbling-block. Take the below with a huge grain of salt...

1. Input stage is curious with its grid-leak bias and 22kΩ plate load. What kind of supply & plate voltage are you getting with this stage? I would expect the low plate load to steer towards higher tube current, but lower plate voltage swing (i.e., "less gain").

2. The Tone control is simple & effective: 2 resistors, a cap & a pot (plus a well-chosen coupling cap at the Input stage's plate). The Treble & Bass clefs are drawn on the wrong sides of the pot's resistance for the effect they have (I'm sure the front panel has them shown on correct sides of the knob).


- The first triode seems simple enough, with a 220kΩ plate load and a 1kΩ (unbypassed) cathode resistor. That stage must have an unbypassed resistor, as it's a feedback injection point from the next gain stage's plate. The first gain stage of this block has a 0.022µF coupling cap into a 1MΩ resistor, rolling off bass around 7Hz. Initial gain is ~57x.​
​
- The next gain stage of this block has a 47kΩ plate load (R61) due to all the parallel loads it's driving, and a 330Ω cathode resistor. Gain is relatively low around 43x but the output impedance is lowered (down to ~27kΩ, again to help drive those parallel loads). This gain stage has a large 0.47µF coupling cap to help retain bass into all those loads.​
​
- There is a Feedback Loop between these two triodes to provide Pre-Emphasis to reduce hiss in the tape recording.​
​
- C37 (5nF?) routes some signal to the feedback loop made of series 100kΩ (R59), 220kΩ (R58) and 1kΩ (R54) resistors. Overall, bass is -3dB for signal feeding this loop at 99Hz.​
​
If the feedback loop was just made up of resistors, gain would be reduced from 57 x 43 = 2451x (open-loop) to ~284x.​
​
- The 680pF cap (C34) shunts treble inside the loop, which causes this 2-triode opamp to have a rising frequency response. The higher frequencies are recorded at a higher level, in order to mask hiss on the tape. 680pF again 221kΩ is -3dB at ~1060Hz, so is having no effect down around 106Hz and a a virtual short-circuit at ~11kHz.​
​
- There are complementary de-emphasis circuits in the Playback Amplifier part of this echo.​
​
5. It also looks to me like R65 (10kΩ) and C35 (2200pF) are de-emphasis for the Dry guitar signal going to the output jacks. 2200pF working against 10kΩ is -3dB at ~7.2kHz. The guitar could be a bit brighter than when it went in, but you've got plenty of room to slug that with the Tone control in the Dry signal path.

Odds & Ends: The resistor/cap (R49, C30) connected to the Reverb Duration control appear to have some room to roll-off treble response if that control is turned all the way down. Even if you don't use that feature on your working NG51, try sweeping the control and see if anything changes in the Dry EQ.
H

Wow, thank you so much for this in depth analysis!

I'm away from home, so I'll write back tonight when I have the units at hand. But from memory, the clefs labelling on the faceplate are counter-intuitive, but indicate what the tone circuit actually does. So turning CCW, toward the F clefs will cut the bass, and turning CW, toward G clef will cut the treble.

I kind of remember that the Reverb duration control cuts some treble in the dry EQ, but I'll have to confirm that, because it was before I serviced the unit, and it also added hum
H

I took a closer look.

- I confirm the labelling of the tone control as above.

- There's no really noticeable effect of the reverb duration control on the dry signal EQ.


Regarding the 2nd gain stage, assuming that I use the 1M input level pot at max CW, can I replace it with a 1M grid leak in my build? Or is there a benefit to keep the original arrangement (ie preventing the second gain stage to be overloaded when the volume control is set high)?

I don't really need the line level input. Any change to expect in sound if I omit it, thus omitting a part of the resistive mixing circuit? Same for R49 and C30. If so, how can I compensate for it?

HH1978 said:
... Regarding the 2nd gain stage, assuming that I use the 1M input level pot at max CW, can I replace it with a 1M grid leak in my build? Or is there a benefit to keep the original arrangement (ie preventing the second gain stage to be overloaded when the volume control is set high)? ...
Click to expand...

You can replace it with a 1MΩ grid leak if you're sure you'll never turn it down. It's probably worth experimenting with a higher Volume control setting & lower Input-Level, and vice versa.


HH1978 said:
... I don't really need the line level input. Any change to expect in sound if I omit it, thus omitting a part of the resistive mixing circuit? Same for R49 and C30. If so, how can I compensate for it?
Click to expand...

Yes, omitting R65 and C29 would change the level & EQ imposed by the resistive mixing section. If you don't need that input, you can just connect R65/C29 directly to ground (which is what Input 3 does when nothing is plugged in).

You can try a test to see what the sonic effect would be: just plug a cable into that jack, or otherwise push the Hot contact up off the switched contact. The noise penalty should be minor, and you can hear what R65/C29 do to the level/tone.
H

I'll try all the suggestions before designing a layout.

Hey man, did you make any progress with this? I have an old Echolette and love the preamp. Always thought it would be great to have a standalone, pre-amp only version in lunch box or pedal form.

I'll try all the suggestions before designing a layout.
Click to expand...