Epiphone quality. A thread on the subject made me think about sharing it here. I never heard anything like this before.

I have a cherry red 335 Pro from a few years back and it’s a really decent instrument TBH. The pickups have a nice sound, and the slim taper D neck is maybe my favorite neck on all of my guitars. (comparing with 2 recent gibsons, a 6 series Gretsch, mid level American strat and Tele - and I love all of these necks as well but the Epi neck just works for my hand size really well).

The pickup selector switch is crud. I do sometimes think about replacing the plastic nut but I don’t have any problems with it. Fret ends could be better but they don’t bother me unless I decide to focus on it. My friend has a Gibson 335 and yeah, it’s better and nicer for sure - but, when I stop doing the “A-B” thing and just focus on the guitar at hand, it’s a totally fine instrument. Tunes up and intonates perfectly. Headstock is the big long wonky one. It could be more sleek…

I definitely would love a real 335 but sometimes when I’m being honest about it there’s not a lot of justification for the shell out I’d have to do…not saying it won’t eventually happen…
Last edited: Sep 17, 2021
A

Have a 2019 Epi V and its great. It is noisier than my other guitars and I reckon the electrics could do with a bit of work. Really like the pickups on it also.

I think with mid range guitars these days there is a lot of over the top praise for them which may raise peoples expectations a bit too much. The V was 600 euros and its fantastic at that point. If I paid 2000+ for it there are things I would not be happy with.

I personally own 40+ electric guitars, and a lot are very good quality guitars.

I just picked up my '89 Korean Samick Epiphone Sheraton II a few months ago at a pawnshop for $277.

Who ever owned it before me was trying to turn it into a "335 Style" guitar.

The previous owner did these upgrades to the guitar

I did a shootout a few weeks ago in my home studio.

The Sheraton smoked both 335's, and it wasn't even close.

The Sheraton had the singing sustaining lead note happening on the bridge, and the power chords had a clear crunch tone the others couldn't match.

Also the Sheraton won in the lead tone department as well.

#2- '83 335 Dot sounded the most balanced of the 3, and excelled in nice jazz rhythms and single note lines. 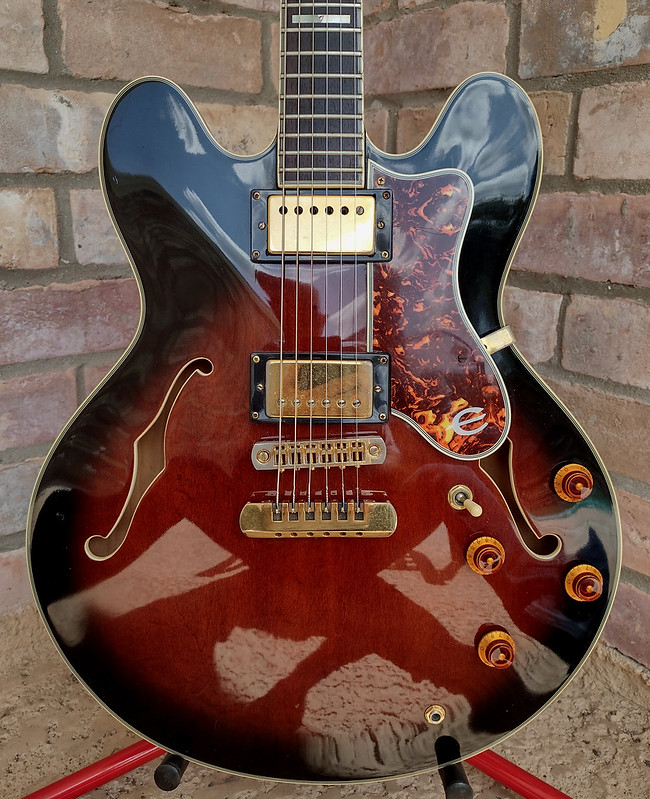 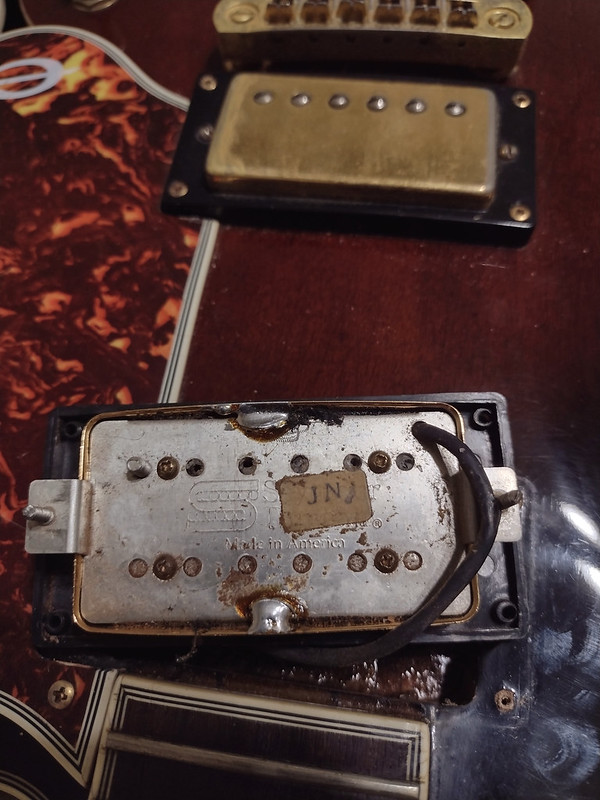 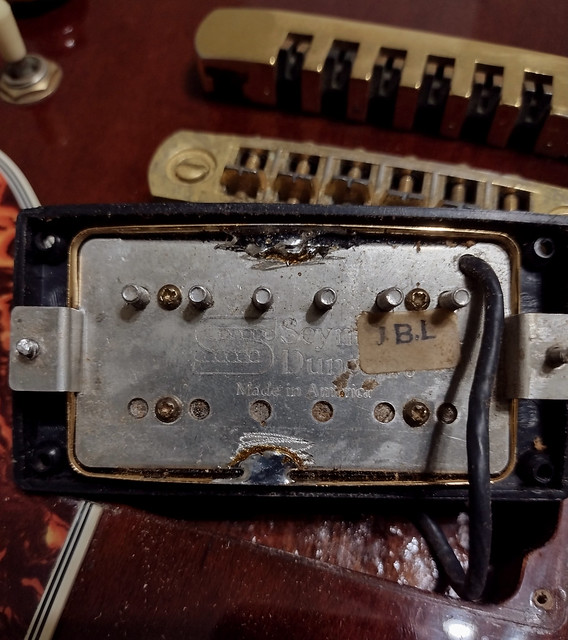 my older epiphone have all been modded...pups electronics bridge nut
my newer epiphone was great out of the box...no upgrades planned

I will say I add string butlers to all my 3 les paul style head stocks...

I suppose it is up to you if you want a trade back. If you traded away the guitars, you know what they are. Did the other party play them before accepting the trade? Are they high quality? What was the amp? If someone is expecting to get 2 Gibson Custom Shop level instruments for a 5150 head, then they are sorely mistaken.

I've never picked up a random Epiphone that wasn't a fun guitar .....I'm sure there are clunkers out there but techs can do wonders sometimes too . Curious what kind amp was it ?
J

I haven’t played that many Epiphones. digress a bit: I have mostly “special issues” Gibson customs. Like the G0 version that’s basically reissue 60 lp for allot less. Picked up a special issue non custom gibson gold top , p90s and bigsby for a bit more than a trad. so from my standpoint allot times some of these special issues can be a deal just get past the naming and look at the specs. Which leads to my most recent family member addition -the Alex lifeson epiphone. Epiphone copy of les Paul axcess. It’s a hell of deal for the money. Very pleased with it thus far. When I started playing some ages ago, I had to play some really ****** guitars. Think the epi lifeson would be a hell of a starter guitar. We are in good times with gear options these days.

Outcome: Former amp owner gets dissatisfied with the guitars in the trade.

Unaswered question: What amp was traded for 2 Epiphones?

Solution: Compare the value of the amp with that of the two guitars.

Since the outcome wasn't what the amp-trader wanted, he should learn to do some researching and calculating before he commits to a trade; thus balance 4 is preferred.

From everything I'm reading, the 2020 and beyond Epiphones have really jump up in quality and consistency. I'd love to get to a store and try a 50's LP Standard and a 59 LP Standard. I think judging these new models against older stuff may add to some confusion in Epi's perceived quality.
J

People should never buy an Epiphone with the impression that it's going to be at the same level as a Gibson.

Wow. I have never heard or read anything like that before. Was his expectations was to high? Or was the quality not good on those 2 guitars? It made me think. Is it the guitar players opinion that did the trade? Or is Epiphone not a good quality guitar? Or did he get 2 guitars that felt like toys?

I do not own any new current Epiphones.
Click to expand...

I have owned a few Epiphones over the years. I've never bonded with any of them, and I have usually lost money selling them. They're fine for what they are, but they don't inspire me. I'd rather spend a bit more and get a used Gibson, because I find Gibsons more inspiring, and because IME it is easier to sell a Gibson.

JB Firebird I, Ebony Flying V, Riviera. All made within the last four years, all absolutely on point. I wouldn't trade them for two or four amps! Great sound, playability and feel.

I have no horse in this or any other race, I just dig that affordable instruments have come such a long way, and I enjoy my Epis every time I pick them up.

It’s best not to involve yourselves in the lives of internet traders. Facts are murky and it’s difficult to find a protagonist among them at the end of the day.

Never had a problem with Epiphone guitars. I've had a few, played many, for the price point, they're good guitars. Once in a while you find a clunker, but that's true of all brands.
B

I have one of the 2020 "inspired by Gibson" LP standard '60s. I traded an Ibanez semi hollow body for it just because the Ibanez wasn't selling and I thought an LP style guitar would appeal to more people. I'm not putting it on the market. I think there is something special about it. It's a great guitar.

IMO- If you buy an Epiphone expecting a Gibson, you’ll be disappointed. However they can be good given the price point.

But did they cause his testicles to swell so his fiance broke up with him?

Epiphones used to be be very hit or miss. Starting in about 2018 they became more hit than miss. Great guitars for under $1000. I have no illusions about the quality of my 2020 Epi Riviera vs a Gibson 335 but at the price point, I have nothing to complain about.

Trades between friends or with a local guitar shop that will give you a good value on your trade-in are much less hassle than person to person trades with strangers. I'm usually happy to take the hit on trade in value at a store just to avoid dealing with some rando's buyer's remorse.
You must log in or register to reply here.
Share:
Facebook Twitter Reddit Pinterest Tumblr WhatsApp Email Share Link