I’ve been shopping around for a Gibson es 335 for something different as I’ve always had fender or les Paul style guitars.

How different are the standards vs custom shops? Also, there is a 1991 with a Bigsby advertised locally are these any better than the new ones?

Whilst with some models of guitar it's fairly common to be able to differentiate between certain years and factory production, I have always found with 335's it's the "one you have in your hands that counts".
They seem to be a model of guitar that varies quite a lot in feel and sound. I would just try every one you come across and get a feel for what you like in them. Out of all the guitars I have, the right 335 was the hardest to find!
Good luck!

The nice thing about the 80s and 90s is it was simple - there was a 335, you could buy it with a couple of neck profiles, there was the odd Custom Shop guitar and that was it. Nowadays there are dozens of options and it gets a bit overwhelming.

For my money, the standard 335 Dots that they have been making since 1981 haven't changed much in that time - they do vary one to the next and I'd be wary of generalisations but there's not really a better or worse era within that. The earliest ones sell for a premium, especially blondes, but that's more because they're classic 50s spec 335s that look like authentically old guitars rather than them being particularly special. People trying to get a premium for late 80s and even 90s because they're 'vintage', 'good wood era', don't make 'em like they used to etc etc are on fishing expeditions. They may well be wonderful guitars - in fact, they probably are wonderful guitars - but there's nothing inherently special that you can't get from a more recent one unless you want it as old as possible for mojo points.

Having said be wary of generalisations, I might as well jump in with some generalisations and say that the '81 to current standard models on the whole tend to be on the more muscular side of 335s, a bit chunkier and more Les Paul like than a 50s or 60s version. The reissue ones that I've played feel more vintage, a bit airier than the baseline models. But, they do vary considerably and you can find vintage sounding Dots and chunky sounding reissues.

There's also the 345 with it's fancier inlays and extra tone control, and the 355 with top level bling and an ebony (or occasionally Richlite or 'dark' rosewood) fingerboard. The 355s are my personal favourite.

Bigsbys on 335s are wonderful things! But you need to get them set up correctly - the much talked about tuning problems are fixable with a good set up.
B

OP, I love Les Pauls, have several, and I love my ES-345. I can personally only hear a serious difference with my Metropoulos Super-Plex and DVL-1 out of 9 assorted amps. With the Metros the 345 has an extra level of morphing kerrang with sustained notes/chords.

So don't be expecting a sea change of difference between a Les Paul and an ES-3X5 unless you are using a Marshall or a top notch clone thereof.

With 335s they're really all different. You have to play it and judge for yourself.

If you have to buy one sight unseen by mail order make sure it has a user friendly return policy.

I got my '01 Memphis Dot Reissue 335 from eBay and it's a fantastic guitar. It was in mint condition, the neck was great and I loved the top and finish. I prefer a two tone sunburst over the tri-color, and I liked that the flames were subtlie, not thin and bookmatched like a 10 top on a Les Paul.

It was only four years old when I got it and it sounded "new". I can't really describe it but it sounded like it just came off the rack and lacked character. Frankly, I was a little disappointed in the tone but hoped it would mellow over time.

Fortune was with me and now that it's 19 years old it sounds wonderful...everything that I was looking for from rich traditional Jazz to complex Blues/Rock tones developed over time. In fact, by the time it was 7 years old I heard a distinct improvement. I wouldn't depend on a given guitar getting much better over time, some do and some do to a much lesser degree.

I was lucky. I held on to it, time passed, and it became the 335 I've always wanted. I couldn't imagine being happier with a guitar.

I'd be really leery of advice that said get a certain year or a certain model. They differ enough that neither is a guarantee that it will be the 335 for you. 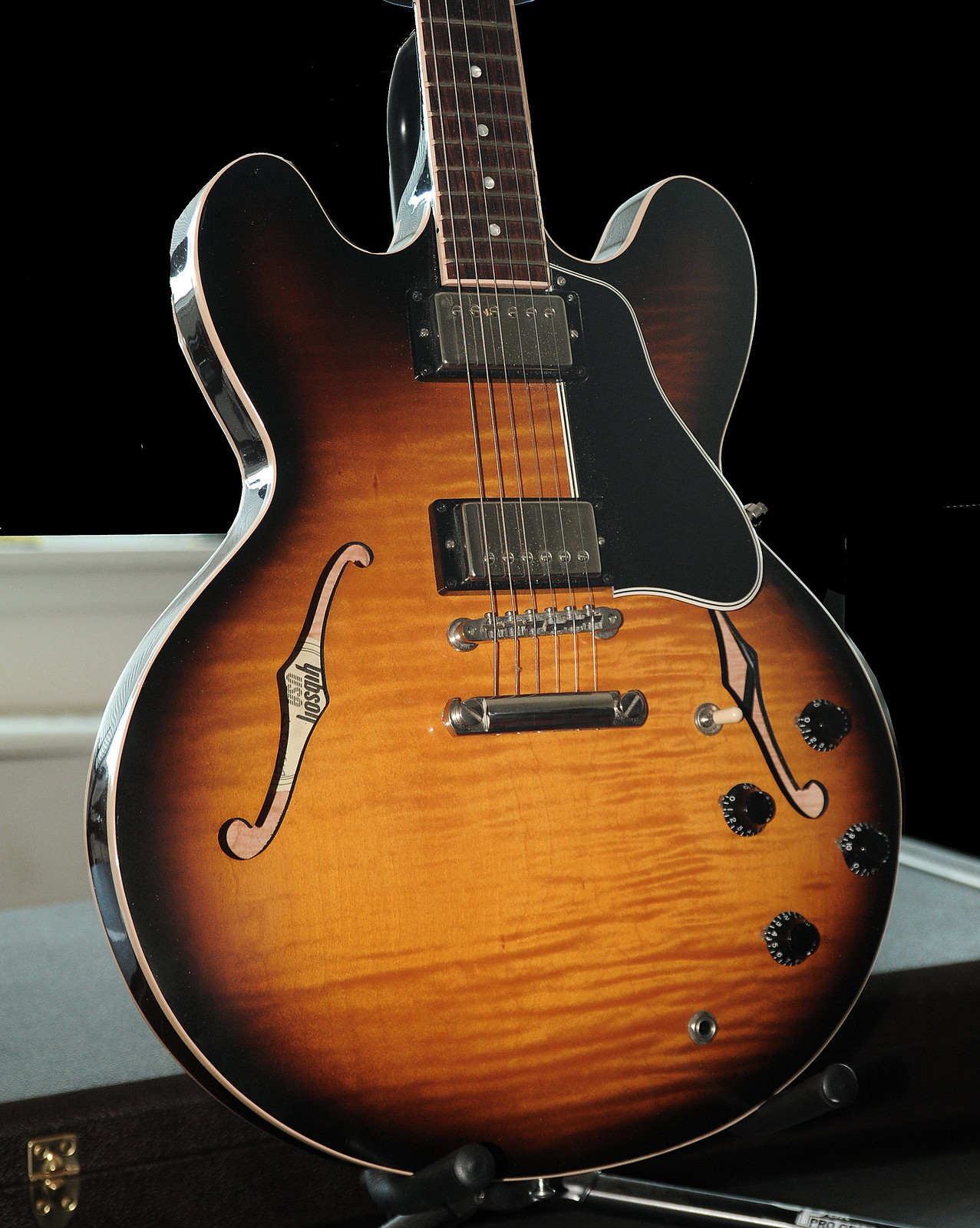 My advice: Prepare yourself that good ES-335 might cause you to forsake all your current guitars.

I have had several of the standard models. Two have been great guitars . Both weighing in at a shade under 8 lbs. I would say Jayyjs summary is spot on. There is nothing wrong with the Standards . You can get a bit pickier with the reissues. It might be worth the extra money , it might not. Like someone said , if you buy new make sure it has a good return policy. My 335 is my go to double humbucker guitar .

Play as many models as you can get your hands on...

My 2011 model from the Memphis plant is on par with any custom shop i own. MR.K said:
My advice: Prepare yourself that good ES-335 might cause you to forsake all your current guitars.
Click to expand...

oh now you’re scaring me.. I went through a similar experience going from strats to Telecaster’s.....

I’ve been shopping around for a Gibson es 335 for something different as I’ve always had fender or les Paul style guitars.

How different are the standards vs custom shops? Also, there is a 1991 with a Bigsby advertised locally are these any better than the new ones?

Some of the post 2015 models kind of confuse me but they seem to be made better than those I found in the 2000 era.

However, I'm in love with that guitar and I'm mostly a Strat/Tele player. Definitely worth having in a multi-guitar collection.

Lots of sage, true advice posted above when it comes to getting the “right” ES335, as they vary so much, unlike most solid bodies, ime.

This ‘59RI has the most comfortable neck, and greater sustain than the others I mentioned and rings like the proverbial-bell. I purchased it here a few years ago, and cannot see myself ever selling it. The fella who sold it to me even asked me to sell it back to him. When you find the right ES335, you don’t want to let go....

Stock 57 Classics are perfect in this guitar. One of the very few Gibson’s that I haven’t replaced the pups in.

Good luck in your search. Take your time.

Here’s the only pic I have available to help stoke your fire: 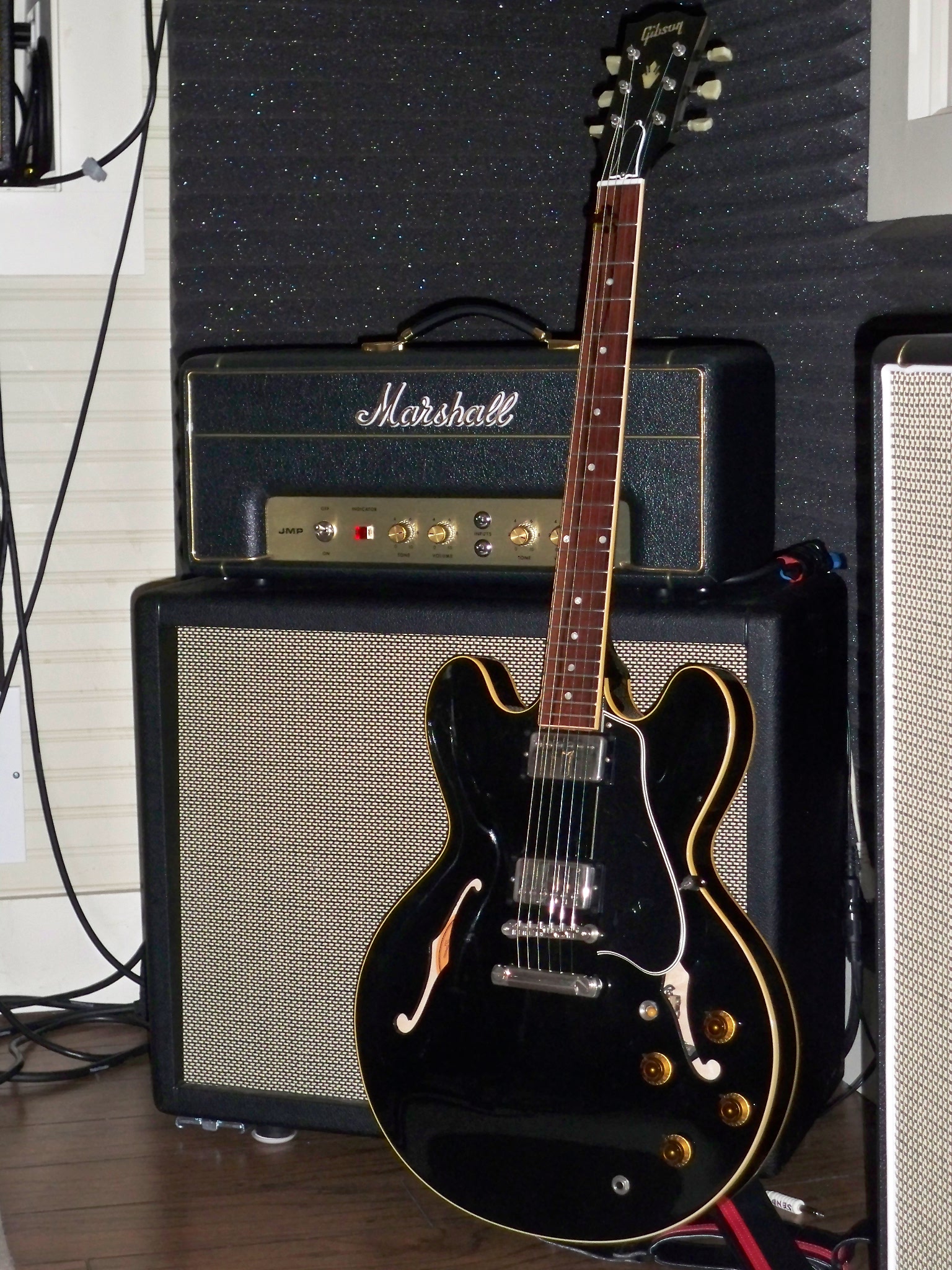 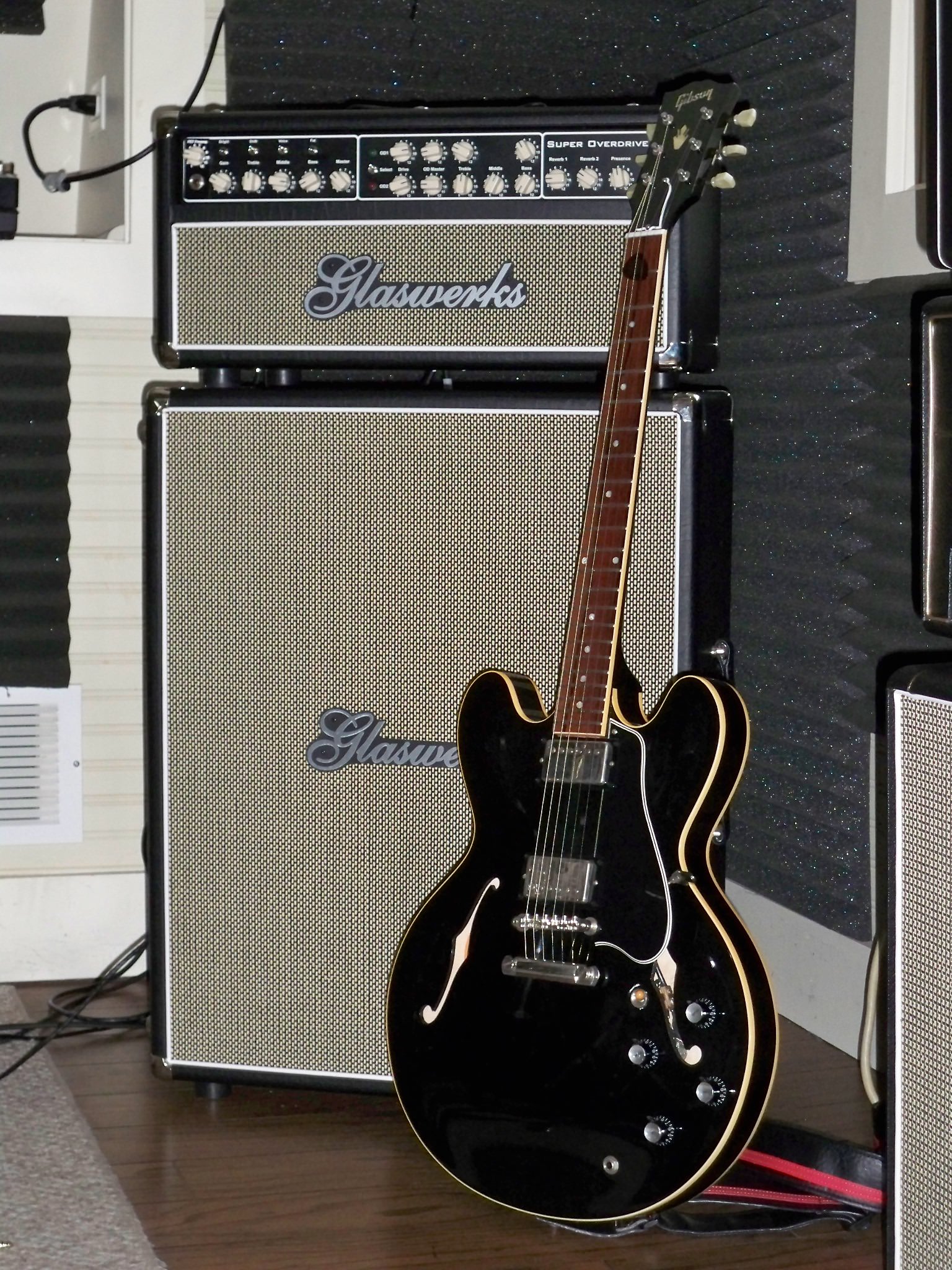 the whole 335 gamut is just bewildering to me...

I have been very happy with my '59 Memphis. Years a go I sold a '59 Custom Shop Dot Historic. Regretted that but this one makes up for it. There is no comparison between the way these look, feel, play, and sound and a production mode.

Woollymonster said:
I have been very happy with my '59 Memphis. Years a go I sold a '59 Custom Shop Dot Historic. Regretted that but this one makes up for it. There is no comparison between the way these look, feel, play, and sound and a production mode.

I really dont like natural blonde colors on 335, but I dont mind this darker colored one!! What is this color??? is it a VOS?

Regular old Dot 335s made in the standard line are great, and have been great for years and years.

I have a Historic dot 335 and I'm not gonna lie - it's not really that different. The key is, as pointed out above, to play a bunch. It's more about how it fits hour hand. The rest is going to be similar.

dreamingaxe said:
I really dont like natural blonde colors on 335, but I dont mind this darker colored one!! What is this color??? is it a VOS?
Click to expand...

Gibson called it "Vintage Natural". It is a VOS. Plays and sounds great.

My wife and I toured the Memphis factory a few years back before it closed. We saw this particular run of guitars being made for various dealers. I had to have one. Almost all work done by hand. Bodies formed from the original '50's steam presses. It was a really cool operation.

Anyone try a 335 with Gibson's Calibrated T-Type pickups? Better than MHS 2?
H

MR.K said:
My advice: Prepare yourself that good ES-335 might cause you to forsake all your current guitars.
Click to expand...

Too true. After I got mine, I don’t think I looked seriously at another guitar for 2 years. Even when recording with my band at the time, the engineer was asking if I wanted to add some other guitars for texture, and I just said ‘Nope!’
In hindsight, after having having engineered and produced stuff, I should have, but that is the power of a 335.

with ES guitars especially you have to either play as many as you can or buy and sell a few to find one that you like .

I will say that most custom shop 335s Memphis or Nashville that I’ve played have consistently pretty good.

I just picked up this 50th anniversary ’60 reissue a few weeks ago. It’s an awesome guitar, I’ve really been enjoying it. It’s serial number is 2 out of the run . 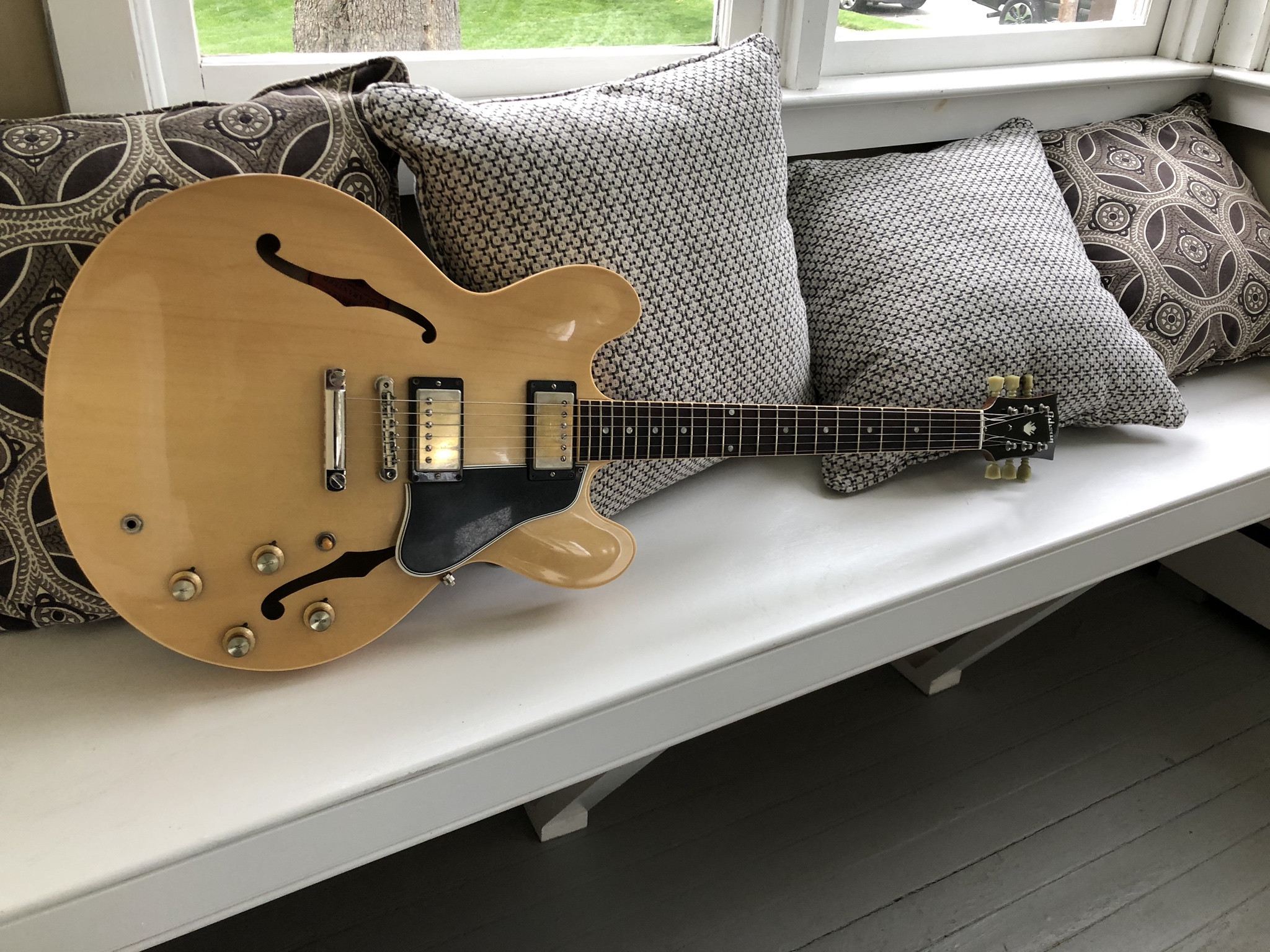