Famous artist you saw where the gig went sideways but they saved it!

RC Mike said:
Oh, I don't think so. Whether or not she was a waitress, who knows? But that she went off script, if there was one? Yeah. I've seen Sammy's shtick enough times to know what to expect. A twenty-year old poking fun at his grandpa status wasn't the norm. Generally, there wasn't much interaction at all other than Sam yelling "waitress!" and a girl strutting across stage to bring him a drink. Sammy is/was a pretty vain guy.
Click to expand...

Scripts change. That bit wouldn’t have made any sense when he was young.

Were the venue’s other employees also wearing bikinis? Odds are, she worked for SH, and wouldn’t have insulted her boss if it weren’t a pre-planned bit. Unless Sammy screams “waitress” at the actual wait staff, which would make him a jackass. But you already said it was a schtick, so that probably wasn’t the case.
R

Tiny Montgomery said:
Scripts change. That bit wouldn’t have made any sense when he was young.

Were the venue’s other employees also wearing bikinis? Odds are, she worked for SH, and wouldn’t have insulted her boss if it weren’t a pre-planned bit. Unless Sammy screams “waitress” at the actual wait staff, which would make him a jackass. But you already said it was a schtick, so that probably wasn’t the case.
Click to expand...

Your skepticism at a whimsical story is obviously well-placed. Upon further reflection, I’m sure she was paid to travel with the crew to every stop on the tour. No way would an unskilled, dime-a-dozen bikini girl be written into a contract rider for a venue to provide. And it’s even more likely that they had practiced that particular interaction dozens, if not hundreds, of times to make it appear like an off-the-cuff insult to the star of the show.

What other possible explanation could there be?

I‘m also sure that Sam’s voice being off that night was part of the show, along with it being a particularly short set once he really started to struggle. None of these things happen randomly.

RC Mike said:
Your skepticism at a whimsical story is obviously well-placed. Upon further reflection, I’m sure she was paid to travel with the crew to every stop on the tour. No way would an unskilled, dime-a-dozen bikini girl be written into a contract rider for a venue to provide. And it’s even more likely that they had practiced that particular interaction dozens, if not hundreds, of times to make it appear like an off-the-cuff insult to the star of the show.

What other possible explanation could there be?

I‘m also sure that Sam’s voice being off that night was part of the show, along with it being a particularly short set once he really started to struggle. None of these things happen randomly.
Click to expand...

Why would it be necessary to rehearse one line “hundreds of times?” Were those pretzels making her thirsty? Whether she travelled with the band or was hired by the promoter, she was part of the show. Why else would he have asked a random server if she was a fan? What are the odds she would be? Self-deprecating humor is a thing.

Early 90’s at Blues fest in Chicago I saw Ray Charles. Early in the show he got pissed because the Raylettes were having an off night. He stopped the song, chewed them out for a minute, they got their **** together and played a good set.

James Taylor - it was just acoustic guitar and him and backup singers. The guitar's cable was fritzing out - sound coming in and out. He just stopped playing and slid it over onto his back and they never missed a beat - did the rest of the tune a cappela.

That has always been my idea of a "consummate professional" since.

Eric Johnson during "Venus Isle" at the Guthrie Theater in Minneapolis. Kicks in his fuzz face for the solo and the thing goes haywire and it's continuous white noise. He plays the solo to the end and turns off the fuzz face and at the end of the song goes "dang! Pull the record from the stores, we're replacing the studio take with THAT!" laughs it off and continues and everything else was perfect.

A couple of classics:

Tiny Montgomery said:
What does that entail?

FWIW I worked stage production for Kevin Lyman & Goldenvoice in the early-90s. I was onstage. I saw this with my own eyes. It was impressive AF.

Mike Watt would go onstage with a pack of strings tucked in the back of his pants. With one hand he would rip out the broken string, while reaching behind his back for the pack with the other. Tossing aside the broken string, and the string pack minus the new unsheathed string, which he was already holding. Then, he would effortlessly slide the string into the bridge with one hand, pull it out with the other, then stretch it to the machine head. The other hand was already there tightening and tuning. He looked like Shiva with twenty arms. And these were all big moves and gestures. No hesitation. He had done this a million times before. It was a frickin magic trick.

He's a good guy too. Very down to earth. Talk baseball and you have a friend for life. 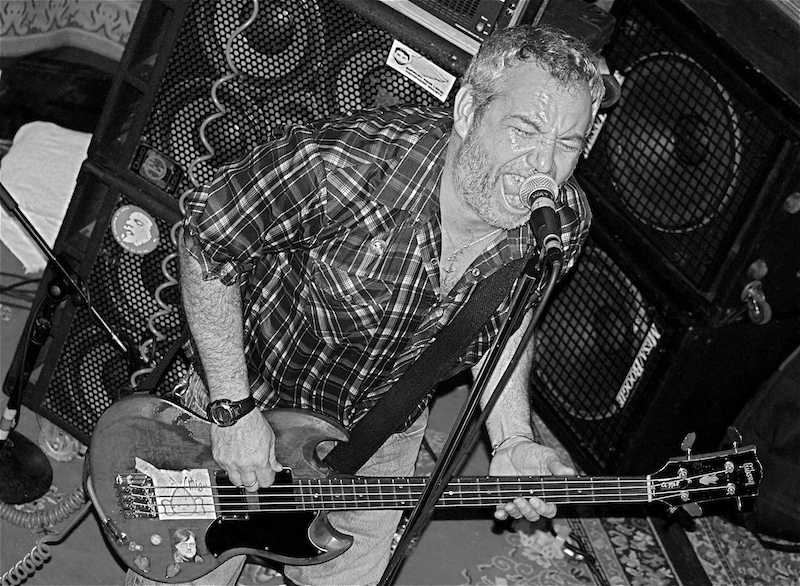 Kiss in 2012 in Shannons home town, Gene was doing his flying out over the crowd bit to the second stage and missed his cue to jump back on and his hook left without him. Once it made it back he got hooked up but the bass started before he got back on stage. Once he got back on stage he was super good at making it look like he was really playing.
D

Seen a couple that were just sad. Lauryn Hill at the University of Miami berating her band who (to me) sounded just fine. Seemed very unprofessional to me. Also saw Afroman at UMiami and he was so intoxicated that it was just sad.

Saw Alice in Chains play on their first club tour after reuniting at The Metro in Chicago. Cantrell was having issues with his in-ears and ended up smashing them. They botched Rain When I Die, and I remember Cantrell going to the microphone and saying something like, "Sorry folks, it's been a while since we've played some of this." It took an already intimate feeling show and made it even better.

What was more impressive was the opening band, Fair to Midland. In the first song, the drummer broke his bass drum head. They finished out the show and no one would have been the wiser. Very impressive.

Saw Soundgarden at the Vic in 2010 in their second show after reuniting (Lollapalooza warmup show). They had a couple of mistakes there also and IIRC actually paused a song and started it over. Again, some comment about "we're a little rusty." Still the best concert I've been to, though Soundgarden was my favorite band and seeing them live was something I never thought I'd be able to do (I was 9 when they broke up initially so hadn't seen them).
C

Back in 1979 I was center stage, about 6 feet away at a Robin Trower show. There was a problem with the vocals the entire show. Dewar continued to sing the whole show but there were no vocals to be heard all night. I LOVED it. Don’t get me wrong, I love Dewar’s vocals, but to stand six feet from Robin Trower and have every note he played be front and center was magic for this 19 year old wannabe.
And props to Dewar for carrying on even though he knew no one could hear him

They blew the power out to the venue about 1/4 way into their set. They literally sent everyone outside at one point since there was nothing they could do. Robbo had walked off in disgust, Filthy couldn't manage a drum solo so Lemmy tap danced and sang some old pub, tunes, jigs and whatnot. Seeing Motorhead for the first time was pretty unreal and though they finally got the power back and murdered the place seeing Lemmy just goofing around trying to keep everyone having fun and staying cool was pretty freaking epic

She opened for the Grateful Dead in the afternoon and was hoarse and barely able to sing at this evening show.

And yet, she was so glowingly friendly and so outgoing that she, and her band, won the house over from the start.

Goo Goo Dolls in Columbus....singer F'd up something at the beginning of a song...I think forgot the words.
They stopped and he said something like "WTF was I doing"...and made fun of himself.

The whole crowd laughed...and they started over.

UFO in Columbus.....sound problems - singer was about to blow a gasket.

I saw Dire Straits in the mid 80s. They'd just started a song, and someone threw a bottle. Knopfler stopped the song. Got the guy kicked out. Then they started the next song. I don't remember what the song was, only the realisation that they were moving on, so we never got to hear the rest of that song live. Knopfler was not messing around. No more trouble after that.

I saw a woman singing solo to tracks in church in the early 90s. (I hate performances to tracks.) Half way through the song, the track just stopped, but her mic was still on. She never missed a beat, just continued singing the whole thing a cappella. At the end of the song she got a huge cheer from everyone. It confirmed for me that day that people wanted to connect with the singer however imperfect things went rather than some safe pre-recorded non-live thing.

Afterwards the music leader said to me, "she was better after the track stopped." I said, "Then why have the track?"

Damn, I'm stubborn on this subject. Sorry everyone

Back in the days when FG was using a preamp/power amp rig, his power amp took a dump about two minutes into the first song of the first set at a Baked Potato show.

Fortunately for Frank, the BP is located in North Hollywood, so FG jumped on the phone, made a couple calls, and someone was rolling a new power amp through the door about 10 minutes later.

In the 80’s saw a local Chicago metal band, Holland. Half way through their set the guitarist’s amp fried. The singer got the audience to chant “Alex blew his amp up” for a while until the opening band lent him their amp.

McFuzzwell said:
I was reminded recently of an Alice In Chains show I saw in the early 90s.
I was working for a local Peaches record store in Tampa and got tickets to almost every show coming through town but this one was a standout.

Halfway through AIC's set the power goes out and the entire park/stage goes dark. Silent.