When I was building my Signature amp with Stephens Amplification, I was particularly concerned with the way the business and moved in the last 10 years and where it is going in the next 10. Big amps are really becoming dinosaurs in that most places don't want you to be that loud. Even in places that are loud they are often using the PA and want the stage sound to be lower for a more even mix. Now of course there are occasional out door shows or rare exceptions, but for most gigging musicians who play 10 times a month they encounter this more often than not. Part of the magick of a plexi is pushing both the amp and the speakers, ad if you can't do that it just doesn't deliver. So how can you make a rig that can be pushed without losing you the gig?

Then there's the two sides of the coin for most players - there's the "clean pedal platform" guys, and the "Crank it and ride my volume all night" guys. How to accomplish both, and accomplish both well, and do it in such a way that you can deliver the goods at today's volumes without having to wrestle with built in [arguably tone robbing?] attenuators?

Finally, it had to have a solid, classic appearance that would appeal to new and old fans alike, and it had to be built with no board mounted tubes or heat elements... for that matter, I didn't want a PCB at all. I wanted it built to last 3 lifetimes so that with proper maintenance and repair it could nearly always be serviced.

We chose to go with a 1987 circuit for the preamp, with the bright cap completely removed. The gain was lowered on the normal channel and raised a tiny hair on the bright channel. It's worth noting Marshall did exactly this on later models but raised the gain too far and every time you touched a pot it sounded scratchy - we didn't raise it even 20% of what they did. At the second preamp tube [v2] we added a cathode protection to the cathode follower - this lets the cathode come up slowly to avoid getting slammed with full voltage all at once. It protects the cathode and increases tube life. The phase inverter is a blueprinted phase inverter - all parts are within 1% of blueprint stated value. We changed the resonant peak at the presence control - the original was truly very, very high, and it was also in the power section so it added those ice pick tones, and increased gain there in the power section. We've lowered it so that it actually beefs the mids a touch and increases the gain there [which is where the guitar cuts through a band mix, not in the tinny high end]. The power section was changed to 2 6V6's for 20 watts of power, on paper bobbin transformers. This means you can turn the amp to '10' across the board and it sounds exactly like a 50 watt without the ear shattering volume. The speaker out was given a proper selector for 4, 8 and 16 ohms for versatility. We also added speaker protection - if you turn it on without a load or if you blow your speaker and thereby no longer have a load you won't blow your amp.

All the capacitors and resistors are hand matched and metered to be within 1% of spec.

All jacks are heavy duty English Cliff jacks. Extra heavy duty switches installed, and they are using the Hoffman turret board for the guts. All pots, jacks and tubes are chassis mounted and are hand wired. Extra heavy gauge wire used throughout. 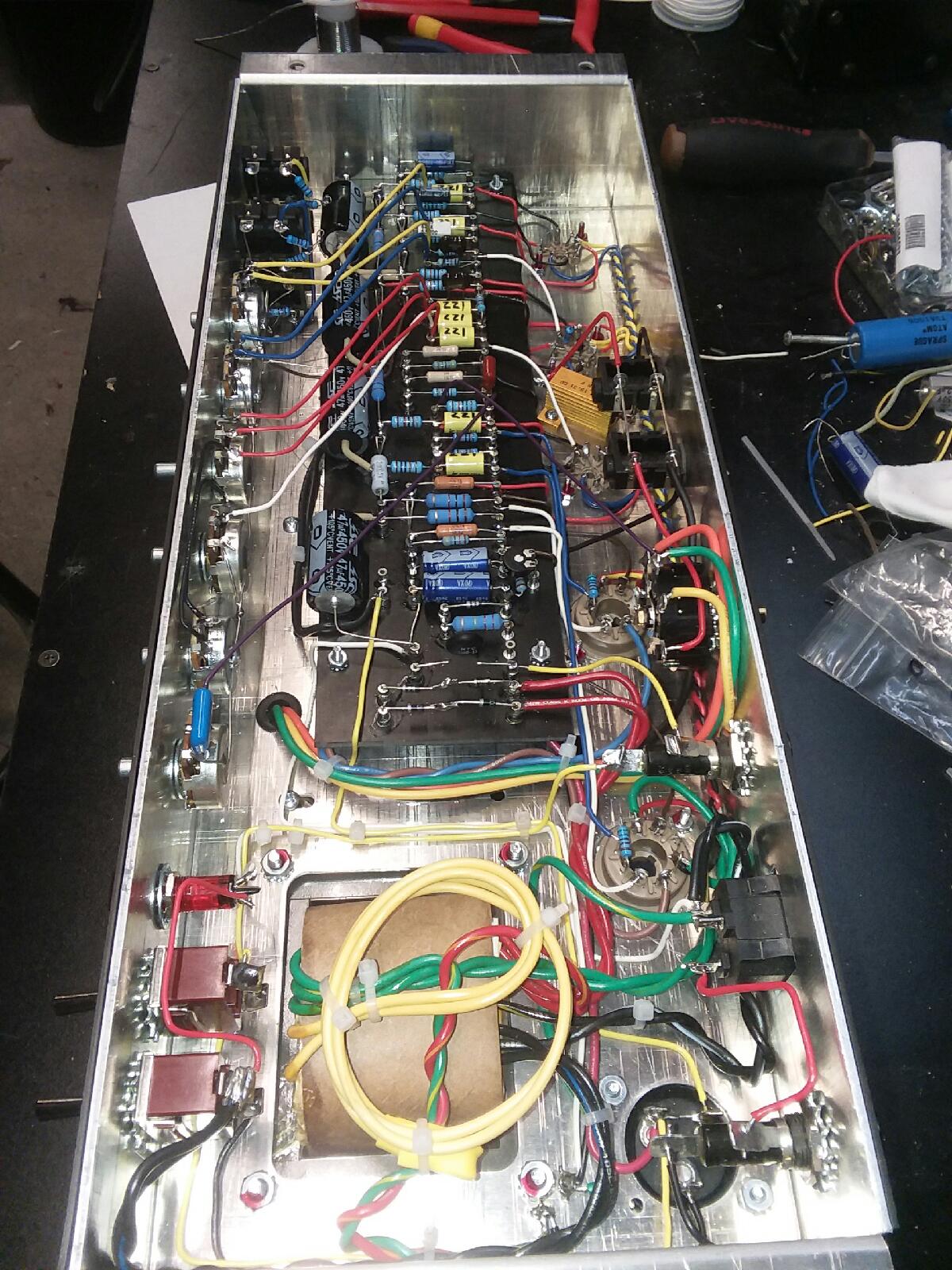 Paired with a 2x12 of 25 watt green backs, you can push the speakers safely and run the amp as hard as you'd like, and not be deafening. Of course, it will accept an attenuator if you find yourself on a "silent stage" somewhere, like any tube amp.

What does all this mean?

It means its super filtered [almost over filtered], and over built, and over protected throughout. It's built to last 3 lifetimes, and can be repaired almost no matter what happens to it. you can use it as a pedal platform but just using one channel - I prefer the bright channel, but the normal channel will be even cleaner and warmer - the normal low gain channel is almost impossible to get it to overdrive! So you can have as clan of a pedal platform as you would like. For Van Halen type tones, jump the two channel [or even better yet use a 'Y' Cable], and turn everything to '10'. Ride your volume knob and you've got everything from van halen to ac/dc to even jazzy cleans - all in your volume knob.

For those unconvinced that they can "get it done" with 20 watts, there is also available a 50 watt version and a 100 watt version [in these version they use larger but still proper paper wound transformers and larger tubes].

But how does it sound? Well...

Here's two of them being used together, live with no edits other than for length/time and the fade in/out...

Now I know this all sounds like a self advertisement, but that was really not my intention. I really just wanted to show how much thought has to go into a particular amp design. Now even with all that does this make it the "perfect amp"? No, I have no illusions about that - I'm sure some vintage purists would had my changes, and there may be some that do not like the heavy mids. I freely admit there are plenty of great, great amp builders out there today who can build you lots of great amps - Ceriatone makes a fine product, as does Germino, the hand wired friedman amps are wonderful, Suhr makes some wonderful products, and many more - and who knows how many small one man shops out there too! This was just my take on how to get a multitude of tones from one amp, at today's volumes, built to last, with band mix tone being the ultimate goal. I think we did rather well.
Last edited: Mar 13, 2020

The Park Little Rock is a great amp.

On the cheap, these are pretty good sounding old school Plexi tones. Not a Germino, but they’re under $500View media item 166503

Crash-VR said:
The Park Little Rock is a great amp.
Click to expand...

I'd love to try one of these. Looks great. 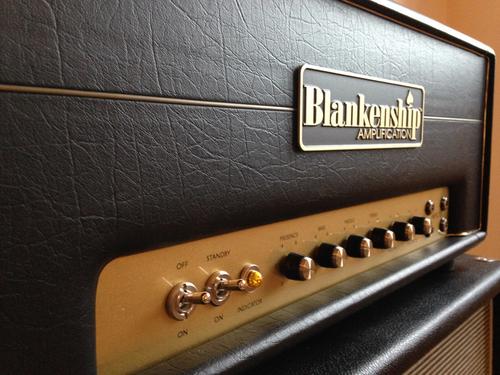 Very rogue suggestion but the Fender Bassbreaker 45 Head does a very good Plexi/early Marshall sound. They're kind of sleeper amps so you can pick one up for not too much money, and you don't need to shell out for an attenuator as it has one built in.

Lastly, Ceriatones with PPMV are just awesome and such a great buy!!

Lastly, Ceriatones with PPMV are just awesome and such a great buy!!
Click to expand...

Thanks for the mention! For what it's worth, we make the Dirty Sink in a 112 combo. It's gets its DNA from the Citizen Gain/Kitchen Sink dirty channel. With all this downtime in isolation, I did blueprint a mini head box for this amp too. I should have a prototype in hand in the next week or so. If all goes as planned, we should be able to do head versions of the Dirty Sink (Clean Sink too) in the next 4 weeks or so.

Quidley 22. More than just a plexi but it’s def. a center point.

All of these come with post-phase inverter master volumes and can be had with 3 step power scaling and fx loop. They use a combination of modular PCBs and handwiring (pots, tubes, jacks, transformers etc). For boutique amps these are pretty affordable too.

I am not in any way affiliated with them, I just like what they do. I own their excellent 4x10 cab and have tried several of their amps. I feel that they make the kind of practical amps the modern guitarist needs that you can just as well use at home as you can on stage without having to invest in an attenuator, deal with jumpering inputs or clipping excessive bright caps.
Click to expand...

I think my cousin Gustav (in Helsinki) needs one of these. Love the idea of a 4x10 also. Used two 2x10s for a few years, only went to two 1x12s for weight and size in regards to transporting them.

Metropoulos GMP45 LTD ED if George still made them.

Next up for me would be anything Germino 50w, and under.
Colby
Park
Wallace are also killer.

Benny said:
I had a very early Gemino Masonette that was extraordinary. It straddled the line between lead and bass spec plexi sounds in a way that made a lot of familiar tones very accessible. One of the all-time great slide amps I've ever encountered (and not just for Allman sounds, though they were certainly in there with the right speakers). It was also pretty easy to get in that zone where fuzz faces, tonebenders, octavias, univibes, colorsound overdrivers, etc., just make sense and sound right. I should have never sold it, but everyone does something dumb at some point in their life.
Click to expand...

Man, do I feel this one. I sold an early Masonette that seems as if it was a lot like Benny's...hmm, Benny, did you buy it from me?

I have a 3rd Power Dream Plexi that I'm really happy with.
Thanks @vain_guitarist !

Another attempt at making the Bivalve try to sound like a Marshall.

This has been a great thread. Has anyone ever tried the Tone King Royalist/Majesty model? Supposed to range from JTM45 to plexi and everything in between.

I have a Bartel Starwood that’s outstanding so I can imagine when Mark was at Tone King, he made great sounding amps.

gulliver said:
I only tried one Carol Ann, very nice, but I think more of a boutique tone than raw vintage Marshall, if that's what you're looking for.

I don't think a 50 watt ol' skool Marshall will be any different than a 100 watts. Both will blow eardrums unapologetically.

I do have a THD Bivalve that might interest you. Thicker voicing up top, as compared to an old Marshall, but can cover old Mashall tones. A true NMV amp with the ability to run on one (or two) tube(s) or use internal attenuation to lower volume while still hitting that power section. Transformers are huge for maximum impact.
Click to expand...

The output transformer impedance matching is different, though, making the 50W one middier.
B

davess23 said:
Man, do I feel this one. I sold an early Masonette that seems as if it was a lot like Benny's...hmm, Benny, did you buy it from me?
Click to expand...