Finally learnt why guitarists can be so precious about their guitars the other night.

If you're worried about another player digging hard into your strings, then you're at a low tolerance level - not that it's bad. Like others, I was expecting him to either drop, scratch, dent the guitar at minimum. I've seen my friends do much worse, which is why I don't generally don't borrow my guitars for people to play - only very close friends. They can play the hell out of the strings and make the guitar wail for all I care - it's an instrument made to be played. The strings? I'm gonna change it anyway sooner or later - so I wouldn't be bothered by it.

I don't mind nicks and dings, but what I can't STAND is the guitarists who consider it a "flex" to go out of their way to be careless with guitars. Like, yeah, my Strat will be fine, and yeah, I've thrashed it around on stage and on tour--

---but I don't need to slam it into the corner of a granite table or take a dump on it and light it on fire when we're just jamming over a couple beers.

Funny thing is my guitar already had a small dent when I bought it. It was B-stock and I got €400 off because of it.

I name mine and dress them up

You know - (some) guitars are cheap.

Get something like one of those Epiphone Les Paul Special II's for $110.00 bucks and leave it at the office. Let others play it. Bang it into things. Lean it against a wall.
See if you can get it looking kinda reliced. Abuse it.

Or maybe just keep a pair of drumsticks at your office. If somebody wants to be musical hand them the sticks..

If somebody wants to get their meat-hooks onto your good guitar, tell them flat out : NO.

Jynx said:
I've been playing guitar for two years and I've never cared to hand it to anyone else and let them have a go. Before playing guitar I never understood either why some people get so prickly if you ask for a go as if you're asking to hold their baby.

Then the other day I had my guitar in the car and a guy from work asked for a go on it so we set it up in the IT workshop with my Pod Go and a portable speaker and I gave him a go of my Schecter C-1 SLS Elite. I just love this guitar.

Anyway this guy has been playing guitar over 20 years so I trusted him to treat it well, more so than anyone else I allowed have a go. Instead he proceeded to pummel the guitar. Striking it way harder than I do. Really digging into the strings. I mean he was playing some dope tunes, but it felt to me like he was challenging himself to break the all strings.

I suppose it figures he knew well what he was doing, way more so than me, but I'm rather light on the guitar. I treat a guitar like The Pointer Sisters. Picture a feather floating down from the sky and brushing gently past all the strings as it passes. It doesn't matter if I'm playing metal or Trad. So seeing him treating my guitar like a pimp would; it made me fear for its safety.
Click to expand...

I have always done my best to treat my things with care and the same for things belonging to others.

In this case, I think this is where you grab the nearest Tele and whack him with it to teach him to be more careful.

I let a friend play my '81 Dean Z and he went wild on it putting a ton of scratches on it where a pick guard normally would have been on an Explorer.

It took me four years to buff them out by hand.

That was it. No one else plays my guitars. No exceptions. 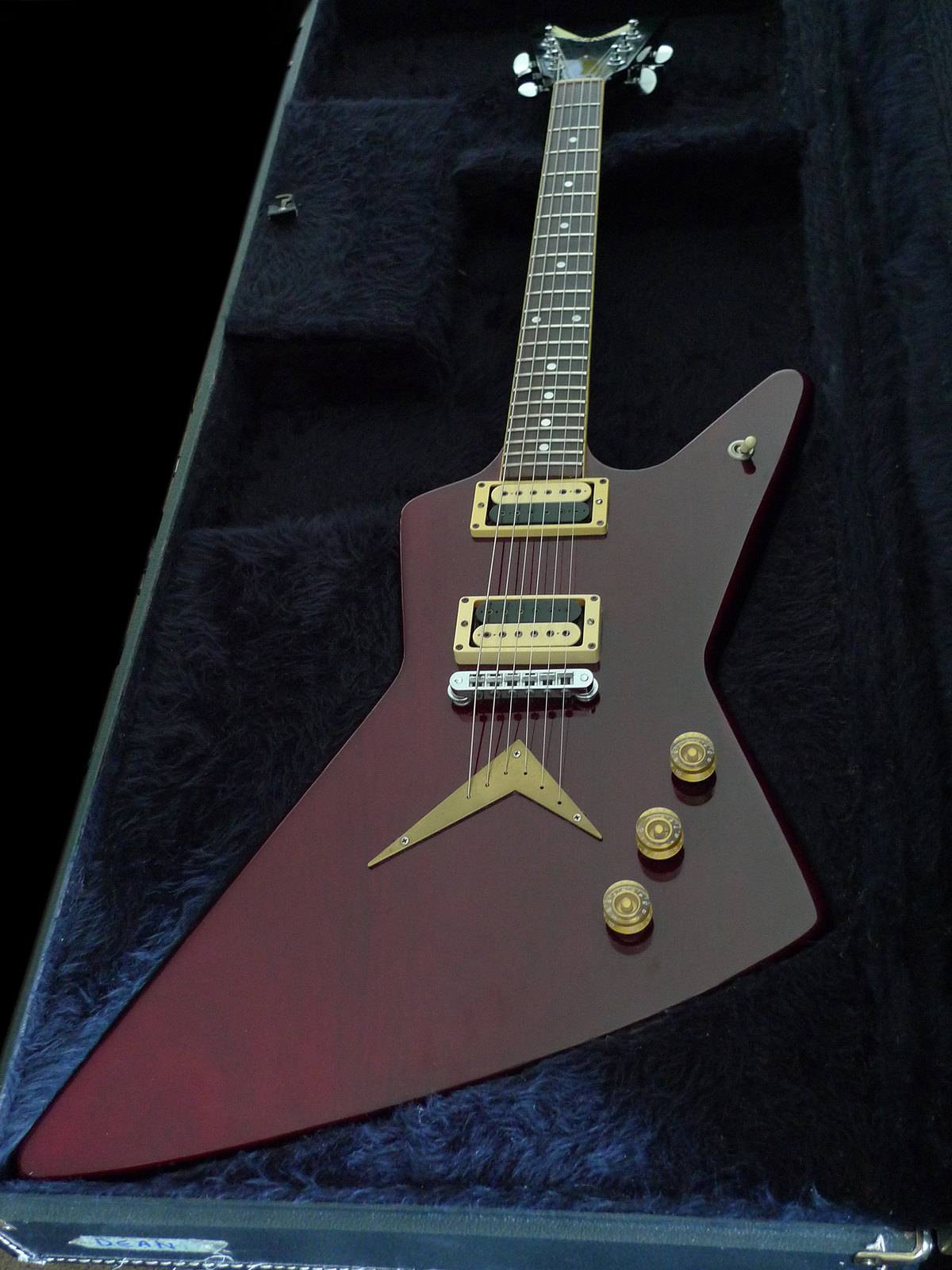 Idk. A lot of variables. The guy coulda just been a show off, pretending to be a big shot and not giving an F# about OP's guitar. If someone gingerly hands me their guitar, I take the social cue and show the utmost respect. If it's clear that the guitar is a working man's guitar, I play as I normally would, which is a feather touch anyway . If its an Elevation, I at least peel the pickguard plastic off for the guy

Oh, and I never give the singer my guitar. They don't know what it's like to work for what they have

YYZ said:
Oh, and I never give the singer my guitar. They don't know what it's like to work for what they have
Click to expand...

Glad no damage came of it. But yeah, im really protective of my guitars.

I had a friend borrow an acoustic many years ago and it fell and got a massive crack in the finish. Thankfully it was a bit of a beater guitar by that point and the damage was purely cosmetic, but still felt cruddy to have it happen. Can’t imagine how bad it would feel to have one of my nicer axes get damaged like that.
Last edited: Oct 17, 2020
B

Playing hard spoils the strings and where they're locked at both ends - the metalware parts.
Aggressive strumming can lead to that part of the strings where you strum being visibly f*ed up. That would affect your further playing with those strings and the sound you get out of them.
Essentially, anything that looks 'too aggressive' to a bystander is guitar abuse.
L

This is one of the reasons I love my relic Tele, or really any older guitar with wear on it either.

You don't have to stress about accidentally damaging a pristine guitar anymore. I loved my Custom Shop ES-330 but I could barely bring myself to play it or god forbid let anyone else play it.

My relic tele? Go nuts. You can't hurt it.

I have a friend like this, lent him my stratocaster 69 custom shop for a jam, and i swear he was trying to wear my frets out in one session.

Never saw him play his own stratocaster like he played mine.

He can play his own guitars from now on.
R

I don’t mind letting friends play any of my guitars. But my guitars have been through quite a few gigs, so they get the normal scratches, etc, that happen. And they play with a feather while I use what ever is around, pick wise.(anyone else remember shattering a unliked record to make picks)
SGs are great for neckdives!
But I did have one friend who had oily fingers, which I don’t. Meant I always had to wipe it down after he played it. Wish he was still here. I miss wiping down the guitar after he played it.

I don't mind nicks and dings, but what I can't STAND is the guitarists who consider it a "flex" to go out of their way to be careless with guitars. Like, yeah, my Strat will be fine, and yeah, I've thrashed it around on stage and on tour--

---but I don't need to slam it into the corner of a granite table or take a dump on it and light it on fire when we're just jamming over a couple beers.
Click to expand...

Lighting it on fire or taking a dump on it, I guess we've all done that in the heat of the moment. I'd call that honest accidents.

But denting it on a table corner, that's just rude man! You don't do that to another man's guitar... Where's the self control?!

Some fellows think brash whacking of a few chords followed by some super energetic funk strumming and then a round of vigorously string raking thwacked bent notes are the best ways to demonstrate their complete mastery and control of the instrument.

My buddy left me his all-original 1958 Strat for a few weeks (although honestly I didn't play it very much, felt like taking his wife out to dinner).

I left with him a small harem of my treasured custom shop guitars for a week or so, and he played them all.

All of the aforementioned guitars returned to their respective owners just like they arrived.

That's why I don't play other people's guitars. I'm heavy handed and play it hard. Last time I did it was when someone called me on stage to sit in on guitar at a gig for a song. I didn't want to do it, but had no choice. Got up there and played my normal hard-handed style. Gave the guitar back to the guy who said... on mic... Holy ****, what did you do to my guitar?!?! and then spent 2 minutes re-tuning it. I'm like... nothing... i just played it. He had super light strings on it... felt like I was playing wet noodles.

This is part of why I prefer to own guitars that have some dings and scratches when I get them. My playing style is very easy on guitars, and so it's easy for me to get a little obsessed with keeping them in perfect shape, which I do not enjoy. If they are a little beat up when I get them, I don't worry about them getting more worn.
You must log in or register to reply here.
Share:
Facebook Twitter Reddit Pinterest Tumblr WhatsApp Email Link