For Those Who Don't Think The British Invasion Saved Music

A segment of American musicians and music fans seem to have an American-centric perspective in my experience. Particularly, those who emphasize that music - and rock - has to be blues or American "roots" based. Music with more European influences - which progressive rock generally had, with its drawing from classical - gets bashed by this aesthetic.

I just see these things in terms of cultural relativism. You don't have to listen to some middle American white guy's claim that you have to have the blues any more than it would be reasonable for a Cuban to tell you that you must know latin rhythms inside out or you're worthless. It just reduces to people's cultural biases.

Early Beatles sounds a bit like some of the '63 schlock to my ears. But they shook things up, no doubt. I think early Jazz and the influence of guys like Louis Armstrong had more to do with "saving" music. Imagine what today's stuff would sound like without him?

it's only rock and roll

Just when I thought I’d repressed those memories of ‘63! I haf’ta admit I always liked SugarShack. I just started guitar and my mom wanted me to learn Blue Velvet...never did.
R

I was 9 in 1963 and my parents and grandmother listened to Frank Sinatra, Dean Martin, etc on the radio. The very few records they had were soundtracks(Sound of Music) and classical. We also watched all the variety shows on the four TV channels we got, two French and two English.

That is how I came across the British Invasion, Beatles on the Ed Sullivan show.

Then I got a transistor radio for my next birthday and started discovering all sorts of great music. Loved getting those stations in the middle of the night from who knows where In the States.

Favourite British Invasion band was the Animals. I even liked the Dave Clark Five and Herman’s Hermits. Henry The VIII was a great song for me to sing as there is only one verse! And I still do Wild Thing today!

Thanks for bringing back some great memories!
S

There are a lot of videos and interviews out there of Blues artists and early Rockers saying how it was the British kids who really listened. BB praises the Stones and the tour they encouraged him on. The Beatles and Stones refused to play if black people weren't allowed in. Hendrix had to make it in Britain because he was getting nothing but ignored where he was - as has been true for many artists.

They loved Muddy and Howlin' over there in a way they weren't at home. True of Miles Davis and Jazz artists in France especially ... and so on.

Remind me why we needed to be saved from this in 1963?

Think of every interview with a musicians now in their 60's....they all say the same thing..."I saw the Beatles in Ed Sullivan", Then think of the music they created. Think of Clapton and the Bluesbreakers/Cream. Same for the influence of Hendrix, who is in many ways a defacto brit artist....lighting that guitar on fire at Monterey really lit the imaginations and creativity of many we consider the foundation of todays music.

The British Invasion was pivotal, I thing it is fair to say.

I was listening to RnB, blues, swing etc years before the Brits. There discovery is no big deal to me. No wonder they dug our music after listening to Lonnie Donegan and Skiffle.

It is very hard for me to be objective about the 60's British Invasion, because it had such an enormous effect on my life from the minute I finally warmed up to the Beatles after become smitten with the Yardbirds, Rolling Stones, Kinks, Pretty Things, Animals,, and later, The Who, Small Faces, The Creation, The Move and others. Prior to February 9, 1964, my interest in music was largely confined to the big band swing my parents grew up with, as well as some of the real rock 'n roll stars of the 50's, including Buddy Holly. Chuck Berry and Bo Diddley, who I saw on American Bandstand. I hated the Brill Building pop music of the day as well as the surf music out of California. Still do. I didn't know what to say to Dick Dale when I met him at NAMM in 2008, other than, "Nice to meet you."

The British Invasion coincided with a growing interest in drums, which was just coming to the fore when The Beatles hit.

Truth is, I didn't know what to make of The Beatles when they hit our shores. My father was repulsed, but that wasn't surprising, so that suddenly legitimized them a bit in my eyes, but I found their early music a bit shallow. "She loves you yeah yeah yeah" wasn't very deep. It wasn't until I saw and heard The Yardbirds, Kinks and Stones, the harder edged groups, that I started gravitating toward the British bands, and then, I went back and picked up on The Beatles and realized what amazing music they created. I've come to appreciate the fluffy love songs they wrote for what they are; well-crafted pop/rock, and after they stopped touring, their musical output went off the charts; Rubber Soul, Revolver and Sgt. Pepper are still incredible statements.

Where is Chuck's version of If I Fell, She Loves You, It Won't Be Long, etc. ?
Early Beatles were the peak of Rock and Roll craftsmanship.

JiveJust said:
Bill Haley showed those English kids how to Rock. Let’s give credit where it’s due.
Click to expand...

It wasn't the bombs? These English kids grew up being bombed by Nazis. They were going to rock no matter what after surviving that. But Yeah Bill somehow got in line first.

I would argue that the British invasion had a much better PR machine, and being from the highly idealized UK- was a big influence.

My money's on how Motown revolutionized a lot of stuff.


(But I lost all my money playing the ponies in this one horse kind of town).

this wasn't being played on the radio, and it didn't appeal to teenagers. In the early 60s Ellington and Coltrane were more popular in europe and japan than they were in the states (outside of nyc)
Last edited: Oct 19, 2020

Flyin' Brian said:
This is what they replaced

Title of the thread reminded me of this book. An interesting read; lots of information about the genesis of American popular music. The author's main thesis is that things were going in the right direction with Motown, Spector, etc., and then the British Invasion came and popular music became segregated again. Not being there I can't say the guy is right or wrong. Oh well, keep a-rocking and a-rolling. 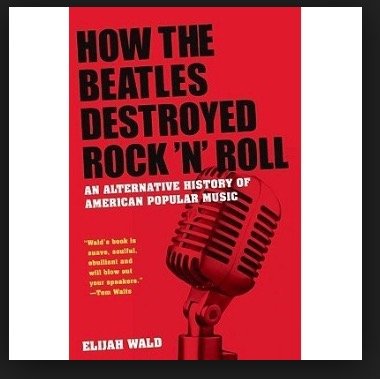 This was pop music at that time. You gonna tell me all pop music got better after this? I don't think so. Some of these were not bad at all when you look at it from the perspective of what it was like at that time. I would bet some commenting here were not alive, so they lack that perspective.

I agree the invasion ushered in the rock era and love most all of it. But there was other good and bad music before and after that still existed outside British invasion music.

Lotsa "folkies" clogging the airwaves in that transitional period from "brit pop" to psychedelia too.

I think Dylan going electric in the mid 60s played a part too...

"Saved" is a bit much

Flyin' Brian said:
This is what they replaced

I was listening to that video and realized even as insipid as most of it was, I still find it better than most of what I hear passing for Pop music currently, with no concept of melody or harmony.
I would have been 11 or 12 at that time and had my first transistor radio tuned into AM radio constantly. FM at that time would have been Classical and Jazz.
You must log in or register to reply here.
Share:
Facebook Twitter Reddit Pinterest Tumblr WhatsApp Email Link