Over the years, I have owned and amassed a rather enormous and horrifying amount of guitars, amplifiers, and related effluvia, with varying degrees of success. There exists, in a forgotten corner of the Overhouse basement, a graveyard of sorts, where abandoned experiments, plans gone awry, and fevered dreams of sonic mastery writhe nightmarishly in the shadows....

I shall lead you on a carnival-sideshow-like tour of grotesqueness through this moldering archive. How many installments this shall be, I cannot say, as the the growth of my collection of specimens outpacing my cataloguing of them remains quite likely, indeed!

Like the brave and foolhardy avian-clad legend of yore, I desired more than to merely gaze upon the bosom of our warm, life-giving Sol. It is my favorite planet, because 'tis so very big.

*Rudimentary knowledge of the mechanics of flight dissuaded me from the conventional approach of tying swan feathers to my arms (also, I am very lazy), so my approach to touch this fiery orb was more or less metaphorical. My Earthbound substitute? What else, but a Flying V!*


Purchased from the original Overgirl's younger brother, for something like 50 bucks (so meager a sum for ascent to the heavens!), it immediately became, somewhat unfortunately, my number one stage guitar. It came to me quite stripped, really just a couple of blocks bolted together. I set upon infusing it with whatever miscellaneous hardware I had laying around. It was, shall we say, cosmetically modified, but essentially sound. I dubbed her Goldie, and proceeded to carve her name below the bridge, but couldn't remember how to make a cursive G, so she became Oldie. Apparently a decrepit Kramer; lord knows what it originally had on it. *Some finer details: 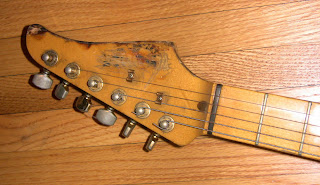 Very possibly a Kramer. I vaguely recall the K being scratched off first, so for a time it was Ramer. Ancient Grovers kept her well in tune. 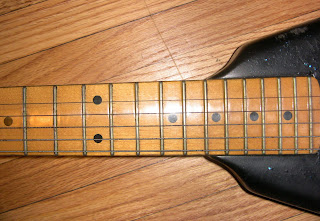 Shockingly nice neck, though I am a sucker for over-varnished maple. Never needed to touch the truss; action always low despite best efforts of crude trem bridge... 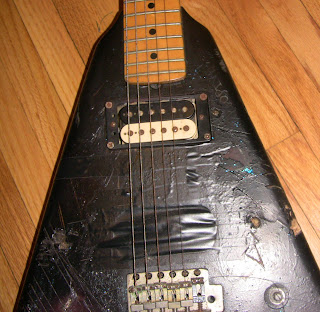 Ripped hard and loud with some hi-line Seymour-Duncan something-bucker. I do not recall what is under the piles of electrical tape, nor do I care to find out. 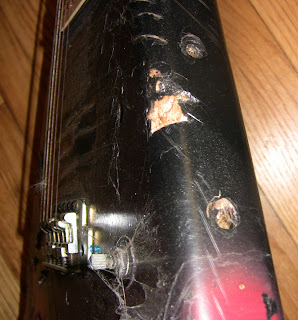 Apparently, it is made of actual wood. Something strange was once bolted to it's lower side. Possibly a knee rest? It sucks trying to play a V sitting down. 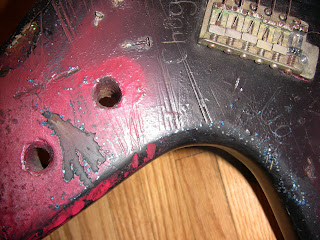 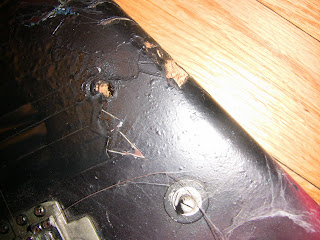 Hole at upper left is actually a bullet hole, there are several on it. She grew up in a bad neighborhood, I guess. I dug out one of the slugs; looked like a .22. Also some birdshot in the back from when I shot her with a 20 gauge (from like, 80 yards, so no biggie). Our relationship was... ...strained... 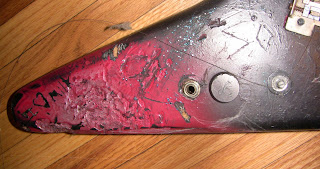 It is true, I do heart milk!


She is not a beautiful object to behold, but earned much praise with her, um, personality. Her future is not certain, but like the Phoenix, Oldie shall some day rise from her ashes anew...

cool as a cucumber in a bowl of hot sauce