The price at Tundra music is $5200! That is pretty steep, since this guitar’s list price was $4500 when it was released.

I have a 2020 Nashville Satin Vintage 335, just curious of what you think about the Calibrated T-Type pick ups on the 345?

How do they compare with your 335, do they sound different? I think they are new and just wondering what people opinions are on them.
Last edited: Sunday at 9:21 AM

I love my Memphis 2016 63' Reissue. The taller frets definitely require a different touch, and can feel weird after playing other guitars. But I adjust to it pretty quick. It's so loud unplugged, that I can't play it late at night without waking up the family.

modavis99 said:
Yes. For some portion of 2012, Gibson used a laminated (2-piece) rosewood fretboard, I think for all their guitars but almost certainly for Les Pauls. Among some here and in MLP, this has devalued their desirability.
Click to expand...

It was everything Gibson made with a Indian Rosewood fretboard from sometime around March 2012 until the end of the year. Gibson fretboards are 10mm thick and the Indian export law they violated, thanks to your Lacey Act, did not allow IR thicker than 6mm to be produced outside of their country...something like that anyways. That is why the laminated fretboard are 6mm and 4mm. My 335 has one and was made in May (I believe).


mjross said:
Oh no, not the dreaded 2012 fretboard issue that does not exist again! Let it go...
Click to expand...

I'm the one who wrote dreaded, not the guy you quoted.
K

What was the idea behind the nylon saddles?

MIke MM said:
I have a 2020 Nashville Satin Vintage 335, just curious of what you think about the Calibrated T-Type pick ups on the 345?

How do they compare with your 335, do they sound different? I think they are new and just wondering what people opinions are on them.
Click to expand...

Good question. My only ‘hesitancy’ on buying the new 345 was around the T pickups as I had not played them before. I like them. A fan of the MHS, I find the Ts slightly brighter and maybe not quite as ‘full’ as the MHS (played thru a Carol-Ann HS2). That said, the 345 is a definite and versatile keeper.

Kmaz said:
What was the idea behind the nylon saddles?
Click to expand...

That’s how they were made back in the day.
A bit warmer sounding.
The new ones are not at all the same.
Different kind of material.

Only negative is how Gibson seem to have flat crowned all the frets,
at least on mine.
K

Great to have some Lefties in this thread!

LOVE my '63 RI! This guitar has sent many other guitars packing.

A couple months ago I walked into a local shop and played this guitar. Couldnt run home fast enough to grab some things to trade in. This 63 reissue has something special. Plays like a dream and sounds absolutely stellar.

One thing about these 63 reissues, are the narrower horns.

The narrower width renders the guitar more comfortable to play than a 335 with broader Mickey Mouse ears.

Another thing about the Memphis reissue, is the case. I love the marigold lining. See photo above.

I see the new Nashville 64 reissue (wonderful looking guitar) has a case with a fluffy gold lining that doesn’t look as good imho.
Last edited: Monday at 3:17 PM

The memphis guitars are very good. I have a memphis 330 that is excellent. Can't fault it one bit.

Kmaz said:
That's a beauty, leftybill. I'm a southpaw as well. I see a '63 model posted at Tundra Music, but many suggest to avoid dealing with them. Shady business.
Click to expand...

Tundra had a listing up at one point of my 69 FCS strat with all of the original photos and serial number, etc.

I had owned the guitar for several years and still do. Not sure what they were trying to sell.

windjamma said:
The memphis guitars are very good. I have a memphis 330 that is excellent. Can't fault it one bit.
Click to expand...

Kmaz said:
Any info on the pickups for this model?
Click to expand...

Careful, at least 2016-17s were MHS. Even though they are all " '63 Reissues", they were not all built and equipped exactly the same. So it will depend what year it was made as to the specs.

Maven said:
That CME sale was crazy right? I remember when everyone was talking about that..should have jumped on it!
Vintage style 335 is my current guitar GAS. Those Throbaks are awesome. Bet they sound great in that guitar
Click to expand...

Crazy indeed. I jumped off the deep end bought a bunch, and to this day, I'm glad I did. Fortunately, the blowout was big enough and extended long enough that it gave me multiple chances over time to really give serious consideration to multiple purchases. It was not a "one shot now or never" situation. At first I was only going to buy one. If I only bought one, that would have been fine.

Right, and well put. Yes, it was confusing not to mention the much more confusing Memphis use of the word "Custom" and even "Custom Shop".


Kmaz said:
What was the idea behind the nylon saddles?
Click to expand...

As was said, a warmer sound. There is a lot of dislike for them and some has to do with the new nylon not being like the old nylon. Interesting that the "other end" (the nut) is nylon with no complaints. I think it is important to note that from what I read from those that have and/or played both the originals and reissues is that like it or not, the reissues with nylon nut really does does nail the original sound. And that is the purpose of a reissue. You can replace the nylon, and many have. I have a 2016 ES-335 Premiere. It is built almost exactly like a '63 Reissue, has same MHS pups, but it has titanium saddles. It is definitely brighter. And I can see where some would say it is "better". But it is not as close to the vintage '63. So there are many of those critical of the nylon that wouldn't like the vintage as much either. Which is fine. That's why Gibson makes the other models too! 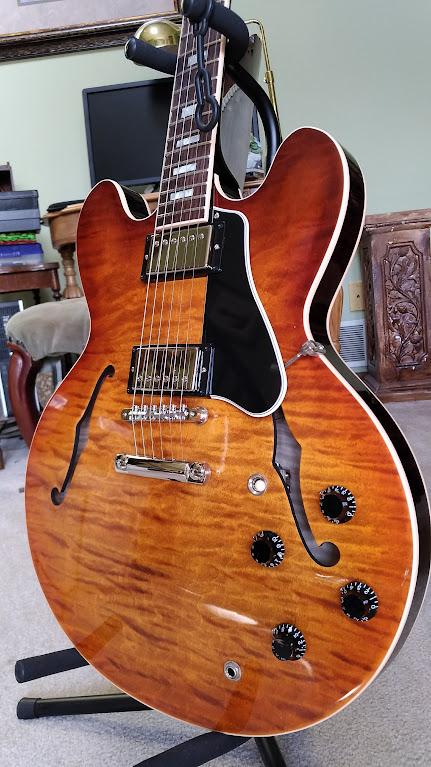 While older than most of the guitars discussed here, I have a 2001 Memphis Dot Reissue that I think is truly exceptional. My take on the Memphis vs. Nashville thing is that there is enough variation in 335s that you really need to evaluate each guitar on its own merits.

The Memphis Dot Reissues were well received and I couldn't be happier with mine. The '60s slim taper neck is not too thin, see the review linked below. Mine fits my hand better than the reviewer and I've played many gigs with it. It's my #1 guitar for playing out. It fits my hand like a glove and I bought my '97 Les Paul Classic Plus largely because it has the exact same neck carve and I can use it for practice saving fret wear on the 335.

I don't know if you can find one but they are well worth checking out if you can. 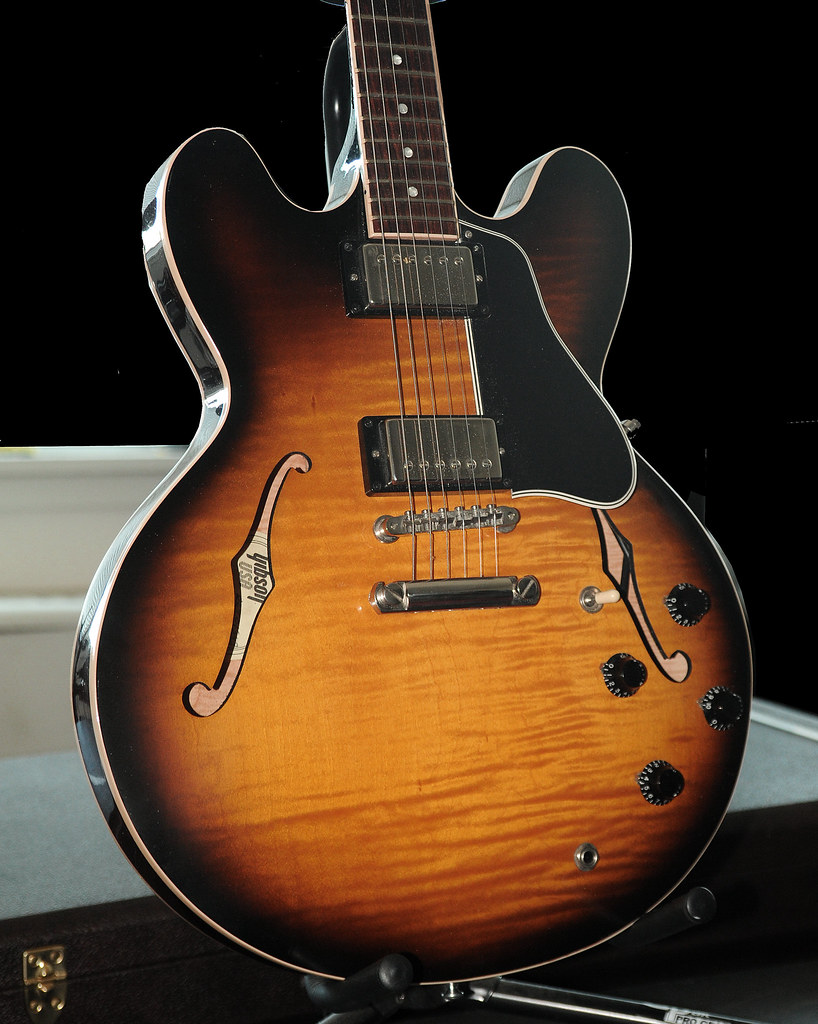 It was very different than the later Memphis reissues...horns not as pointy and wider waist, '57 Classic pups, red tortoise shell side dot markers, Slim Taper neck, steel saddles and a plain wood pinstripe outline around the headstock.