Guitar you first really wanted when growing up

BC Rich cause that’s what Megadeth and Slayer were using when I first started playing.

The first guitar I really lusted for was a '64 Gibson ES335 in cherry red. I was bummed out when they went to the stop tailpiece in '65. It just didn't look as cool to me. In late '65, my dear Mom gifted me with a new Epiphone Casino so I did all right at an early age. In 1978, I acquired a '67 Gibson ES335 in sunburst. I would have rather had cherry but the sunburst was available and priced right. I soon had the 335 converted to a stop tailpiece and I now prefer the sunburst over cherry. I still have the 335 by the way.

A Rickenbacker was the first guitar I recognized . Well the headstock . Then later seeing my cousin with a red 335 shaped thing when I was little . I have both took me to being in my late 30's when I got em finally

In the early mid 80's, When I was 16 or so, my buddy acquired a Tuxedo Les Paul Standard from some goofy hippy dude for something like $300 (it was very similar to the one @mr_cheef posted earlier in this thread). At the time, I was playing my first decent guitar, an Ibanez SB70 -- which was a perfectly cromulent guitar, but which I was already a little self conscious about, and which immediately seemed decidedly plebian next to my friend's new instrument. So I guess it's fair to say that an LP was my first guitar crush.

Unfortunately, much like my first girl crush, a real LP was way out of my league. Fortunately, I had recently discovered the lascivious allure of the the Carvin catalog, and I quickly developed a deep infatuation with this little number, which seemed at least attainable as a stretch:

And about a year or so later, I had a nice little financial windfall that enabled me to pull the trigger. It turned out to be a wonderful guitar -- and apart from the neck wood, body wood, fingerboard wood, scale length, lack of body carve, stero wiring, phase switch, coil taps, brass nut, and wierdo roller saddle/fine tuning bridge/tailpiece assembly, it was just like my buddy's Les Paul!
Last edited: Oct 19, 2020 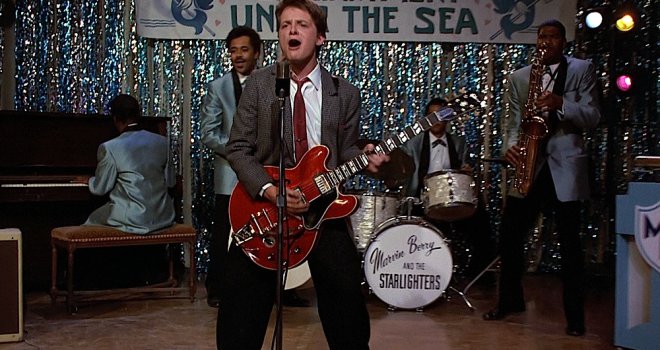 When I saw that as a kid, I knew I wanted to play guitar.
Click to expand...

Same here! And I've heard plenty of other guys my age (30s, 40s) cite Back to the Future as a key influence in picking up a guitar. 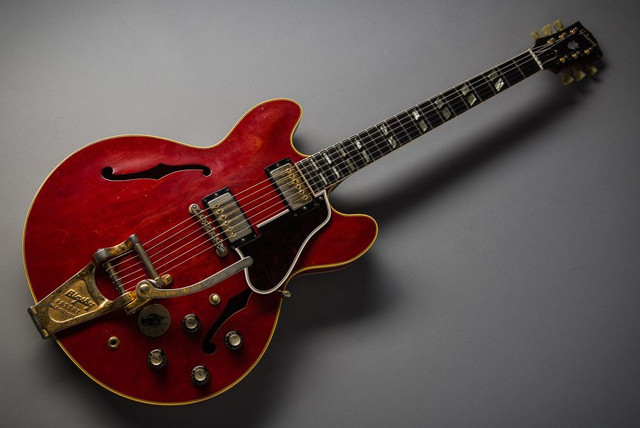 As a fourth grader taking lessons, I was really interested in black strat-style guitars with white pickguards. I finally got one a few years ago.
S

There was one in the Sears Roebuck catalog that had 4 pickups.

Sunburst jazzmaster. It’s still the most beautiful guitar to mine eyeballs.

I can’t explain the attraction. It certainly isn’t the most rock and roll, nor the first guitar I can remember seeing anybody play.

Sunburst Strat that Lou Diamond Phillips played in La Bamba...thing was beautiful to 12 year old me.

‘73 sunburst Stratocaster with rosewood neck, drooled over it every time I went in the LGS.
Dad bought me a Crestwood Mustang copy instead, traded that piece of junk for an upgrade.. a Teisco Del Rey, seriously! Eventually ended up buying a mid-‘60s Candy Apple red rosewood Stratocaster, and will always hate myself for not owning it today.

Two of them:
Neil Young's Martin
and George Harrison's Gretsch.

Started my musical journey as a bass player.

My first bass was an Orlando Jazz Bass copy that was sunburst.

I really wanted a Fender Jazz bass and bought a used Sunburst with rosewood fret board and block inlays from Guitar Showcase in 1981-2 and they lied to me about it. I think i didn’t get ripped off but that I told a lie. Said it was a 1960s bass but what year was a three bolt neck? Yes it was 1977-8 Jazz.

It really was a great bass till it was stolen.

"What's that man movin' cross the stage?
It looks a lot like the one used by Jimmy Page
It's like a relic from a different age
Could be, oo-ee"

Highnumbers said:
Same here! And I've heard plenty of other guys my age (30s, 40s) cite Back to the Future as a key influence in picking up a guitar.

Damn, that is nice. Congrats!
T

Started to learn about guitars in 1998, but my only guitar lust come a year or a year and half later. Saw a video of Mike Portnoy Liquid Drum Theater if I'm not mistaken from my teacher stash at his home. Saw an Ibanez RG 7 string from the Acid Rain clip played by Petrucci. Still never own one yet. Maybe someday.
J

I wanted a Fender Stratocaster, then a little later a Jackson RR.

I got the Stratocaster and sold it, and I have yet to get me a Jackson (several decades later), but I will get one when I grow up.

As an 80’s teenager, all I wanted was a Gibson Les Paul Custom. The unobtainable. At age 35ish, I was able to buy a brand new one. I typically swim in the used market. The dream lasted a few short years, until it was stolen after a gig. I will likely never afford another, but man it was nice. Still crushing to think about.
You must log in or register to reply here.
Share:
Facebook Twitter Reddit Pinterest Tumblr WhatsApp Email Link