I would love to find out more info about both Hendrix's White and Black strats and Gilmour's Black Strat.

Those colors are custom colors, which are quite rare, and both of them have maple cap fingerboards, which is very, very rare (only a few hundred total were made in the 60's decade).

Arguably the most famous purveyors of the strat sound both played identical super rare guitars!

On this same line of thought, I believe they were all purchased at Manny's in NYC, so who at Manny's was ordering these custom guitars from Fender?

Thanks for the White strat pics Ape Factory! 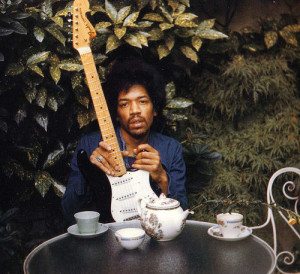 That book is cool, but it focuses on other details

I just found this I don't think either guitar was custom ordered. In fact the book on Gilmour's Black strat describes that Gilmour bought the Black Strat at Manny's in 1970 to replace a similar guitar he bought there a few weeks earlier, which had been stolen. The Black Strat was originally a sunburst colour, but had been repainted black at Manny's.

I'm sure Hendrix's white strat was purchased off the rack too.

Right, they did purchase off the rack but Fender only made those guitars as custom orders back then, so either Manny's ordered them that way, or Hendrix asked Manny's to order them, or something else...

The only Stratocaster sold featured a Sunburst finish and Rosewood fingerboard. If you wanted any other color, it was an upcharge and had to be ordered, and the maple cap fingerboard was the same way.

So why did Manny's have all of these Custom Color maple cap strats?!

Did Fender ship some "custom" feature guitars to certain dealers?

The Island of Misfit Pedals

Manny got all the good stuff.
B

Manny's was a pretty big deal back then, I'm sure they just had a bunch of Strats in stock in various colors. You may be thinking there's more to it than there really is...

those were the days

Sounds like Manny's was the Wildwood of that day...

A few small nitpicks with that Univibes article: it claims that the black Strat was used at Atlanta Pop, but the white one was played as well.

The white one was also on stage at the Isle of Wight, but Hendrix used only the black one (and the V) that night.

Pretty sure the RAH shows in Feb '69 were the white one as well...

Rockinrob86 said:
Thanks for the White strat pics Ape Factory!
Click to expand...

Sales tax is 6% in KY, and has been as long as I remember. I don't know about NY, though.
J

Dealers ordered what they felt would sell. There was demand growing for maple board Fenders in the mid-late 60's, Manny's likely had seen the demand and was responding. Similarly, around 1966 EU Wurlitzer in Boston ran an ad that declared players could now stop "scrounging for old, worn out maple necked Telecasters" as they had just received a shipment of brand new maple fretboard Telecasters.

Maples return was a response to customer demand. It is interesting to look back at that era and how Fender chose to respond to things. They basically reissued the original P-Bass, just renamed it the Telecaster Bass. Tele's were very popular again after many years of low production. Most of the new models of the late 60's and early 70's were Telecaster platforms. Players were digging the 50's stuff in those days.
B

I thought maple cap was the norm for that era. Fender even did their reissues like that and here's one, first one that came up in a google search.

In that era, the vast majority were rosewood. The "maple caps" were simply a way to fill orders for maple necks without disrupting the mass production process in place. One piece necks use different jigs, templates, and run a different production schedule. In '69 they saw maple was in such demand that it was worth setting up to do production of one piece necks. They began with the Telecaster (high demand in maple at that time) and worked their way through the other models over the next year.

buddastrat said:
I thought maple cap was the norm for that era. Fender even did their reissues like that and here's one, first one that came up in a google search.

The maple cap strats are very rare, but I've never seen a production number. They are definitely not the norm, and Fender did the reissues because of Gilmour and Hendrix.

I believe in 1970 fender started converting the machinery, and definitely by '71, one piece maple necks were back.

Interesting points about the Wurlitzer ad, jimshine! This is exactly the kind of info I was looking for
J