How many do you really need?

TheEightSixty said:
Interested to see how many guitars folks own, and why.

Do you own one guitar for each style of music you enjoy playing? Are you a collector that looks for specific guitars and keeps them in the case? Are you a one guitar wonder with a guitar that covers all the musical territory you need?

Personally, I like to have a balanced stable, and I enjoy guitars that can cover lots of ground. Strat, Tele, Les Paul, Acoustic, and a Bass of some sort. I feel this covers a lot of musical ground for my needs.
Click to expand...

I go in and out of phases with which guitar feels right in my hands. Some days the Rick feels best and some days it's the Strat or the Tele. I feel everyone needs to have both an electric and an acoustic. Do I want more? Yes. A bass is my next purchase and then I still would like a Gretsch semi hollow body, a 6 string nylon and a 12 string. I've been playing for about 35 years and many have come and gone, but this is the most I've own at once. I've tried Les Pauls twice and we just don't get along, but an SG would be nice.

Live, I always bring 2 electrics at least. One is basically a backup for the other. If the set calls for the acoustic then it comes as well.

A total of seven Guitars:

I lost count. Lord help me. I do play full time professionally and have used them all as such for periods of time. There are two or three I plan on selling. Most I will keep for life. I need to catalogue them for my kids so they know what they have when that time comes. Until then, yippee!

Need? 3. Have? 6. 7 soon. As long as I have two electrics and an acoustic I can play any gig. I have one electric that’s a Swiss Army knife guitar. I can do anything on it. Most of the others have a niche they excel at and get pulled when I need that.

I have 4 Teles with different pickups, 1 Strat, a semi-hollow, an SG, an acoustic and a bass.

I only NEED two - a Tele and a Strat. Well, 3 cause I really do need a bass for recording and an occasional gig where I’m asked to play bass.

As for people who own 30 or 40, or more,it’s their money and it’s a great hobby, so more power to them. I’m semi-retired and I’m thankful to have what I currently possess.

I’ve got 11, 4 electric 5 acoustics...I play all of them regularly. Gibsons Sg, & LP, fender Strat, Dean strat, ...3 twelve string acoustics , & 4 six strings...Eastman, Martin, Ibanez, Gould... I would not sell any of these but have sold dozens over the years & gave a few away. I’m 65 & been playing since I was 10 so I guess I love guitars. The joy I get from playing is priceless. It’s like dope...
oh yeah & two ukulele, not big on them but do play them at times...

I had 152 once upon a time. In my defense I had planned to partner up with someone on a music store and most were destined for that purpose. I have about 30 now, with around 5 flagged to re-home. 3 acoustic, 1 bass, and a mix of electric. I'm hanging on to a lot for sentimental reasons. Three I bought from a pro musician who died of cancer for example. Some are one of a kind and just too cool to part with.

I reckon I fit in the category "As many as I can fit in my home."

Or driveway, as the case may be. 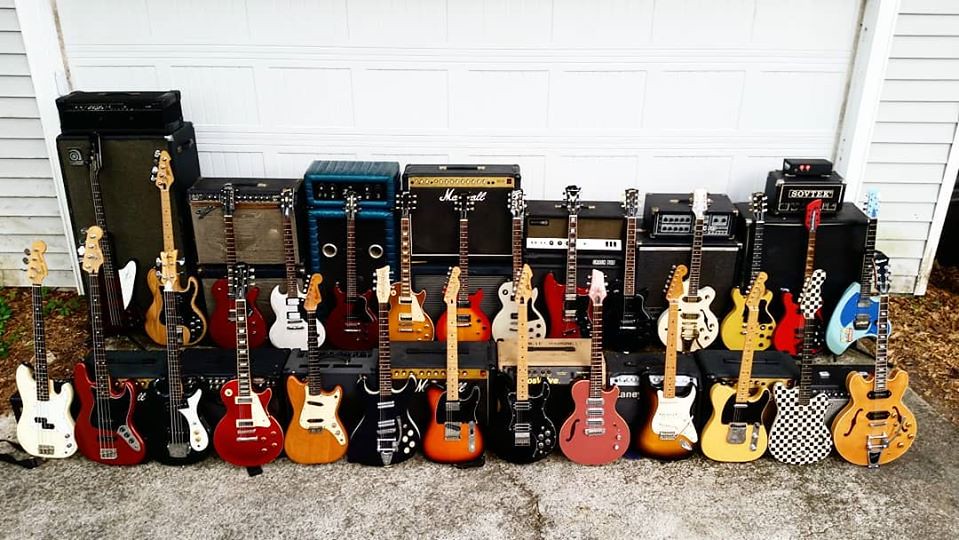 (In the interest of complete accuracy, there is now one more guitar, additional to the above photo from last summer. Although the checkered guitar doesn't really count anyhow since it's been "wall art" since the '80s, so the overall total is correct. Absent 3 acoustics.)
E

I am a songwriter in an all originals band. We do not play any covers for the reason that it is hard enough to learn your own stuff, and then play it wrong. It would be far worse to botch someone else's songs, That said, I have been collecting guitars and have over 20 oddities. I love them all. They all sound different. I only own a couple fenders and let my les paul go it was too heavy.
Anyway, guitars are to be played and since I cannot play more than one at a time, I am going to get rid of many of them.

I only have 2 electrics and 1 acoustic. The only reason for this is that I’m broke. That is the ONLY reason. I just want to be clear.

I’ve expanded and contracted over the years from as few as one to as many as 20 or so. I think:

If I had to do it all with one I could. Level 1 for me is just having one, super versatile guitar.

Level 3 adds come slightly more specialized sounds: P90s, Filtertrons, Dynasonics, Modern Hi-Gain, maybe a Thinline. Add these and the stable is up to around 10.

Level 4 gets into more nuances of more subtle pickup variations of the same pickup type, or noise-cancelling variants for recording. This gets the stable up to maybe 15.

Level 5 gets more into cosmetic differences, or intentionally duplicate options for live... two basically identical guitars that are just different in color. This is where I try to resist going completely off the deep end, otherwise... guitarmaggedon.

TheEightSixty said:
Interested to see how many guitars folks own, and why.

Do you own one guitar for each style of music you enjoy playing? Are you a collector that looks for specific guitars and keeps them in the case? Are you a one guitar wonder with a guitar that covers all the musical territory you need?

Personally, I like to have a balanced stable, and I enjoy guitars that can cover lots of ground. Strat, Tele, Les Paul, Acoustic, and a Bass of some sort. I feel this covers a lot of musical ground for my needs.
Click to expand...

I have dozens. I like variety. Eventually you run out of space or money. Until then, whatever.

I don't "need" any--I'm not a professional guitarist.

An acoustic and an electric would cover some "bare minimum" scenario that I shudder to contemplate.

On a daily basis, I play about five--a mandolin, a six string acoustic, a twelve-string acoustic, an acoustic baritone and an electric six string. I do a lot of review where I play the same song on each of those instruments in sequence, throwing in finger picking and capo'ed chord forms to keep a tune really deep in my brain and give me arrangement options. On a gig, I rarely take more than one instrument.
J

Thanks to my wife, I can explain exactly why I have all of them.

Warmoth Tele Custom - Because I wanted to build a custom guitar, and it wouldn't be worth it to sell a custom Warmoth

1960s hollow-body Japanese bass - Because it was $85 at a guitar show in Austin.

2017 Gibson Firebird V - Because I had to buy one just to be able to see one in person and play it, it is beautiful, it's rare, it has mini-humbuckers that sound better than all my other guitars, it plays great, it's neck-through, and I know I'd regret selling it

2020 Fender Jaguar - Because I wanted a 24" scale Fender, I wanted a tremolo, I wanted a surf guitar, and I can install built-in effects without changing the stock look

2017 Gibson Flying V - Because I've wanted a flying V for 20 years, it rounds out my collection of iconic guitars, it's Hetfield white, and Albert King is boss

It really depends on where you live.

I had more than 10 gutars and a couple of acoustics and nylon strings.

Now that I am in a small apartment 2 good strats, 1 tele and something with HB's and an OM acoustic are enough.

Narrowed it down to 2 amps as well plus the iridium.
F

Not including a lap-steel, I have five; and though each is its own thing: a fully hollow jazz-box (old Epi Emperor Regent w/ the traditional neck-mount miniHB), a semi-hollow (Starcaster with authentic WRHBs), a Mexican Jazzmaster (with the J. Mascis P90-style pickups), a straight SSS Strat (with the wonderful Fat-O-Caster switching system) and a Parker Hornet (Parker's take on an SG/LP-sort), I still have them because they're the guitars I bonded with best over the last 30+ years.

With the exception of the Parker (which doesn't come up enough when I'm looking for a specific tone), they're the guitar tones I need most when recording. It's the rare week that I don't plug in each of the four principals at least once.

Live-performance-wise, the Starcaster comes in first (as it covers the widest possible swath of tonal ground) with the Jazzmaster and Emperor Regent both vying for second. The Strat and Hornet rarely leave home and pretty much live in the studio.

Right now I am Jonesing for an early 70s Walnut 335 with trapeze tailpiece. I am also looking at the Historic 64 SG - the new ones. A White LP Custom with Gold Hardware would also be cool.

I don't collect guitars; I play them. I own five electric guitars, all with unique tonal qualities. I also own 3 acoustic guitars, a couple of basses, a mandolin and a ukelele. I buy guitars that expand my tonal palette:

2019 Firefly FFLP Elite (project guitar with SD Whole Lotta Humbuckers and Jimmy Page wiring, because I would never do that to my Les Paul)

2019 PRS Custom 24-08 10-Top (I wanted one for years. Amazing tones. My favorite neck. The most versatile guitar I have ever played)

2018 Yamaha LS-TA BS (beautifully crafted instrument with concert body in spruce and rosewood. T/A reverb and chorus is a game changer that increases your desire to play. What can I say other than I haven't played either of the other two since I got this!

I could get by with my PRS and Yamaha Transacoustic. If the house was burning down, I would grab my Les Paul, PRS, Mouradian and Blade first, and the Taylor and Yamaha next.

The answer is always ONE MORE