How Many Stratocasters Do You Own?

I’m pretty much set in my ways when it comes to guitars. Sure I’ve tried Les Pauls, Telecasters, and SG’s. But I always choose Stratocasters. Am I alone? Or do my fellow Gear Pagers own multiple Strats?Didn’t want to post another poll, by the way. Member
Fender Stratocasters are different from each other but are in the same family.

My most recent Strat is a Ventera.

IMO, it doesn't matter where a guitar is made, as long as, it's a good one.

fender 60's ventera strat youtube - Google Search
This is the only one I have. Don't really know anything about it other than it has a fender stamped replacement neck, appears to have been "refinished", and is routed for SSS config. This picture is an older one. Since the picture I have replaced the pickups (fat 50s neck and middle, duncan SSL-5 bridge), had the nut replaced, changed the trem block to a steel one from GFS, and unblocked trem.
Its an ok guitar I guess although every time I play a different strat I feel like they always sound better and play better than mine. One Charvel So Cal (basically a HH strat with a floyd)
Several "superstrats" which are a bit pointier.
2 that were parted together, none by Fender. A 3rd is in pieces
No, my Suhr is like 30% easier to play and sounds amazing. Taking the 99 in to get a full setup and the main volume pot redone, hoping they can get the action down a little as well. Just needs some TLC.
3...and I'm not even a strat guy!
I have one strat. A partscaster designed for me by a dear friend in 1984 and assembled in his shop. It consists of a 21 fret ESP rosewood fretboard 7.25 radius neck and ESP alder body. It’s all painted gloss black with a single ply black pickguard and a black powder coat Kahler locking trem and all black hardware. It’s had multiple pickup sets over the years but presently it has a set of old EMG SA s. It was my primary gigging guitar back in the day and I still gig w it. It still has the original frets and never had any fretwork of any kind done to it. Eventually I’ll have it re fretted and might have the fingerboard radius flattened a bit too. Its a great guitar. It’s been on hundreds of gigs and some studio session work I did in the 38 years I’ve owned it.
1982 AVRI ‘57 Strat in 2-tone sunburst
1983 AVRI ‘62 Strat in 3-tone sunburst
2017 (?) Vintage Reissue ‘65 Strat in Olympic White
2017 (?) Wildwood Thin Skin ‘59 Strat in Olympic White
2021 ESP Original Snapper Silver Spec Mirror Pickguard
2017 ESP Custom Shop Jeff Hanneman Urban Camo
2013 ESP E-II Horizon NT Reindeer Blue
2005 Fender Stratocaster Deluxe MIA Candy Tangerine
2002 Ibanez RG620 RQ Blue Last edited: Jun 24, 2022
I own two: one is my main/favourite one, an American Ultra HSS, which I currently use for recording and gigging. The other is a recently acquired Am Pro II SSS, which I will use to experiment with different pickups. I'm relatively new to Fender (bought my first Strat, an American Special (now sold), in 2018), so having an extra I can use to try different pups and see what I like is very instructive, I think.

I'd like to keep things this way, sticking with only two Strats, with one hotter and the other a bit more vintage. Of course, if I inexplicably become a millionaire I will be buying a few more just for the hell of it.
None. The closest I have currently is a Charvel Guthrie Govan.
I have four, and parts for another in the works. All are Strats but all feel and sound different enough that they're still here.
late 90s Lonestar and Big Apple strats. MiM 50s player strat. One G&L strat type, and a bunch of super strats.
Two.

A Wildwood 59 relic that is the best guitar I own, and a partscaster built around a road worn body. The white strat is everything I'd want from a vintage strat -the bridge pickup sounds like it swallowed the Tom Petty discography.

The silver strat is nothing incredible, but it gets a lot of use as a do it all guitar.

1979 modded Strat (yeah, I need a better picture of this one)

Last edited: Jun 28, 2022
2010 EC Signature Blackie and 1996 G&L Legacy Special. Both have been my #1 stage guitar at times. The EC’s active boost and TBX and the Legacy’s power rails and a passive mid boost I added make them versatile across many styles. Also put 6100 frets in the EC.

They rock nicely and can still approximate classic strat tones- esp the EC with the tbx. I sometimes jones a bit for a more vintage Strat and lookyloo at K-Line Springfields, Fender EJ Signatures & 57 RIs and PRS Silver Skys but there are other types of guitars ahead of ‘vintage Strat’ on the wish list..like a Charvel Guthrie or some other super-Strat type performance guitar.
I consider the Strat base (well) covered with these 2. Many years ago I had my first brief fling with electric guitar playing. I got a Telecaster and it pretty much defeated me (my previous experience, such as it was, had been classical guitar and pseudo-classical fingerstyle acoustic guitar). I quickly found that playing with my fingernails and trying to do altered tunings and use lots of open strings wasn't going to translate all that well to the Telecaster.

But right before giving up on electric altogether, for a couple weeks I owned a Robert Cray model Strat. Compared to the Tele, well it was no comparison. Lighter, easier to wrap my arms around, less twangy pickups, I swore if I ever owned another electric guitar it would be something like a Stratocaster that's fun to play rather than hard work!

I don't literally own a Fender Stratocaster but I own an Ibanez "super Strat" style guitar (double cutaway body, two humbuckers) and another Ibanez that is basically a directly hardtail Strat copy (three single coils, Strat switching, etc.). I love both of them and they are indeed great fun to play. Although I've got to say, for my playing if the bridge pickup were missing I'd never know it. I live on the neck pickup and especially the in between setting of neck+middle on the SSS one. And the HH one I do a coil split on the neck humbucker and use it as a pseudo-single-coil.

But the greatest contribution Leo ever made was the neck+middle position on a Stratocaster. Yummy!
I own two. A 2019 American Professional Stratocaster with Suhr V70s in the middle and neck (pictured in the middle) and a MIM partscaster made of a Blacktop body, way older MIM neck and some really nice Fender 57/62s.

The MIM has that certain strat mojo, but the Am Pro is such a hi-fi sounding instrument and it just plays itself. 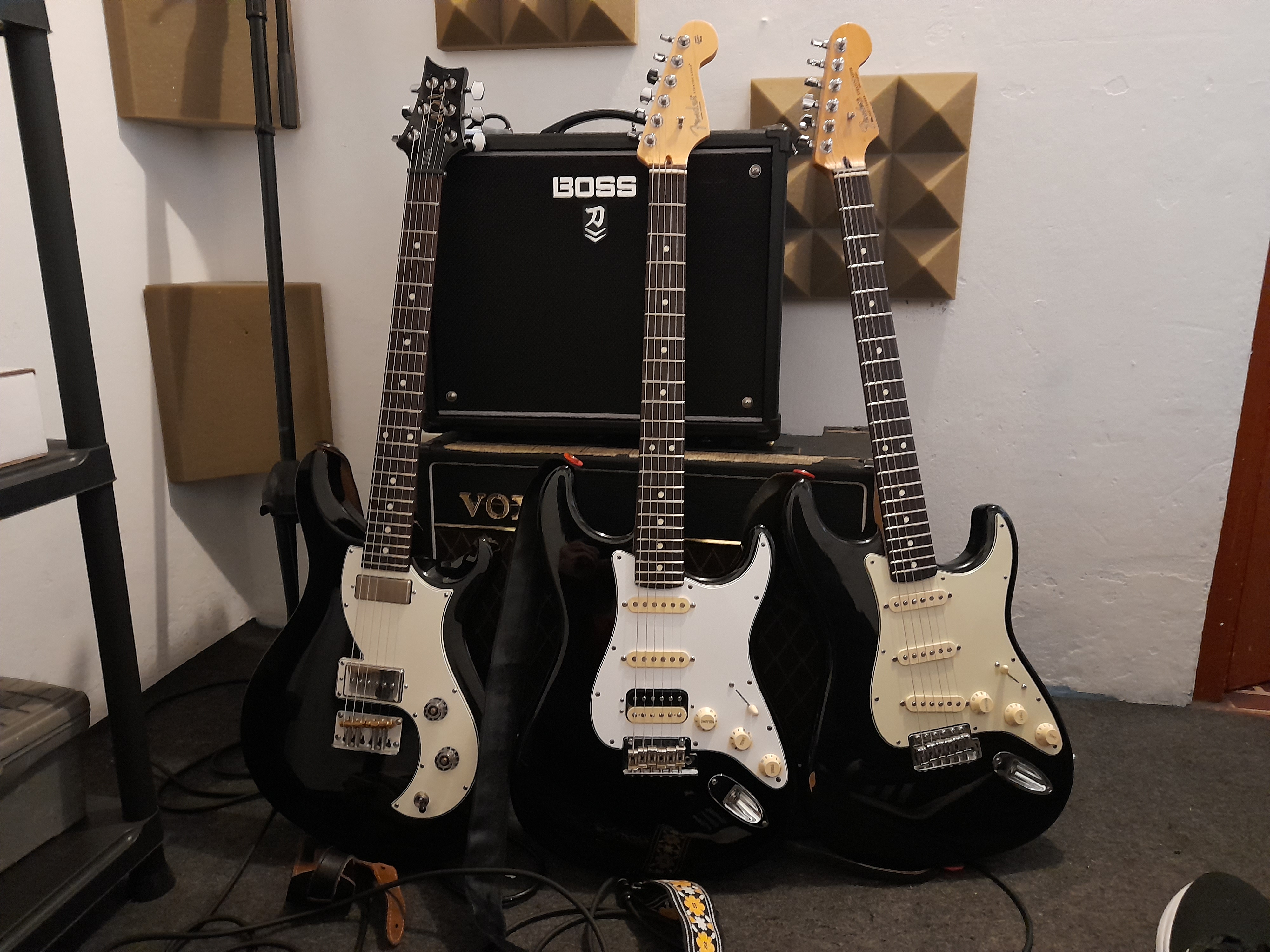 I have a Squier Bullet Strat but just 1 "actual" Strat...and it's a good 'un.

2004 Deluxe Ash Strat - extremely high spec and in damn near mint condition. The has the SCN noiseless pickups with S1 switching