I walked through the musical ghost town yesterday

I work in Manhattan but don't get above 45th Street often. Yesterday I picked something up on Broadway and W 47th. I decided to head east on W. 48th to see what was left on the block from a music point of view. The answer? Absofreakinglutely nothing. It was eerie. Below some pictures from yesterday and below those some from better times for the block, which used to be GREAT.

I'm not much of a photographer (as you can see by the poor centering of the picture), but this is one of my favorite pictures I've taken.

What a sad state of affairs.

That is a truly sad state of affairs. When I lived in NJ in the early 80s, we used to take the bus/PATH train up there just to wander around the stores for a day. A whole freakin' block of guitars! I remember a guy pushing one of those big, canvas laundry carts filled with Strats, SGs and other assorted guitars from one store to the next. If you had a guitar case in hand, those guys would be all over you. Spent some time with JJ French in Manny's one cold afternoon. Some great stories.

Rudy's moved...stuff happens...had a great long talk with him not long ago, noodled on some vintage guitars. New location is very nice!! 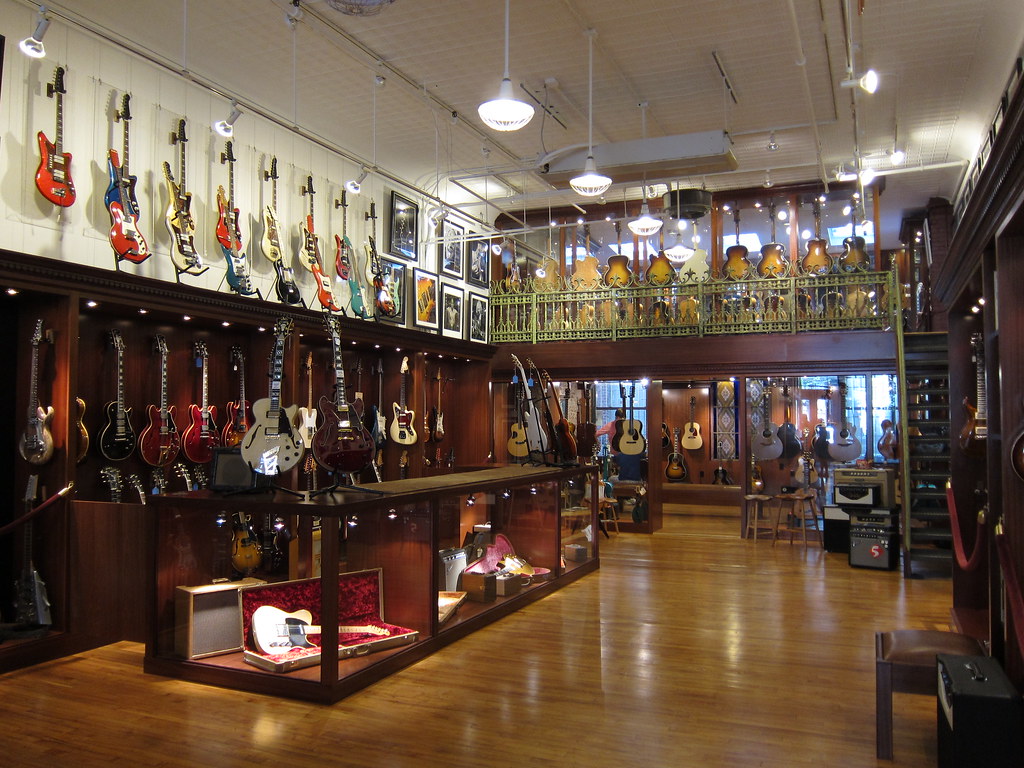 What I find more disturbing than old music stores re-locating to different locations, is the shutting down of live music venues. And I'm not talking about tourist traps like the Bitter End Or BB's. Just a couple of days back I saw that Cake Shop on the LES is shutting down. That a steady stream of venues in Brooklyn and Manhattan have been regularly shutting is what really saddens me.

Man, Bought my first real guitar (a fender MIJ 85 strat)and amp (sidekick reverb 25) at Manny's as well as my lil Marshall Studio 15
I bought an awesome USA Tele at We Buy, Lake Placid Blue w/rosewood fb (which my friend bought new for me as a b'day gift recently so i would stop regretting selling it ) for $450 with a tweed case.

We Buy used to have some great deals when ya hit it on a good day back when pre CBS Fenders were not $20+K
I walked thru there recently with my mom and was bummed out, she was like wow it's all gone huh?

One thing i don't miss is some of the "joey bag o'donuts Long island heavy metal/giuido types" they had working at the shops that would sit talk shite and intimidate youngsters who were trying to buy their new axes, I saw a guy who wanted to buy a guitar one time in Manny's get told "you said you're budget was $400" after the guy wanted to look at a USA Strat, NOT COOL you never know when someone is going to dig deeper and spend 2x-3x the budget.
I think that guy just walked away dismayed, hopefully he got his guitar somewhere..

You used to have to know how to talk to them to let them even let you try a guitar. At least now you can walk into a shop and not have to have a story ready b4 you ask to see a guitar. (this happened to a lot of friends over the years) I do kinda miss it all being in one location though and not having to go all over the place to see diff/same stuff.

Those photos are depressing. I bought an Iceman II in the mid 80s and all sorts of pedals at the places on 48th. A friend bought 2 or 3 basses. It was fun to spend an day there checking stuff out and spending a few dollars. But as rambleon noted, venues closing is even more disturbing. getting gigs gets harder and harder as the years go by.

T92780 said:
Rudy's moved...stuff happens...had a great long talk with him not long ago, noodled on some vintage guitars. New location is very nice!!

Rudy's on W 48 used to be packed all the time. In fact he had to move his amps to 7th Ave space to have room for his guitar customers. When I've poked my eyes in the Soho store, it usually looks like your picture. The set up of the old store made it easy to pull a guitar off the wall to play. Not true anymore. Yes, things change. In this case, as is often the case, it's disappointing, at least to me.

I used be there a few times a month looking at guitars from the mid 60's through early 70's as a teen.
I bought my first good guitar at Manny's in 1965...I worked all summer and bought a cherry Epiphone Riviera new for $300....Strats were going for $175.
I met many bands at these stores including the Yardbirds.
Great memories ..... miss the fun.

rambleon said:
What I find more disturbing than old music stores re-locating to different locations, is the shutting down of live music venues. And I'm not talking about tourist traps like the Bitter End Or BB's. Just a couple of days back I saw that Cake Shop on the LES is shutting down. That a steady stream of venues in Brooklyn and Manhattan have been regularly shutting is what really saddens me.
Click to expand...

I live caddy-corner to the Bottom Line in the 90's (Mercer and 4th). Great venue. Like most of the real estate in the neighborhood, NYU bought it and that was the end of that.

Welcome to: "cheaper on line"

I worked in MI retail for 12 years. I find it ironic how many bemoan the loss of b&m music shops on a blog in which I've read hundreds of threads over the years with countless posts of members discussing how they got a great deal and always expected 20-30% off of MAP/street prices that were already 30% off of list.

It's extremely difficult to cover overhead in a small-town guitar shop, much make any real profit. I can't even imagine facing a constantly-escalating Manhattan lease month in and month out for years. It's gotta just be soul crushing.

Anyway, it's more sad for us middle-aged and older guys to realize that our good ole days are behind us and nostalgia kicks in.

On the other hand, more cool gear is a available to a wider segment of the musical population, regardless of geography, than ever before.

Times change and we gotta roll with it
S

I love how New Yorkers refer to streets and cross streets so definitively - as if the rest of world has a clue what they are talking about.

If those are apartments above Sam Ash, I bet that sucked.

I just walked through there yesterday and was saying the same thing to my wife, How it used to be the mecca of music gear and you never knew who you were going to walk into there. Lots of great memories!!

S1Player said:
I love how New Yorkers refer to streets and cross streets so definitively - as if the rest of world has a clue what they are talking about.
Click to expand...

atreidesheir said:
If those are apartments above Sam Ash, I bet that sucked.
Click to expand...

I believe that above Manny's used to be the studios where Phil Spector did many of the "Wall Of Sound" recordings.

"Henry Goldrich used to tell customers, "You try it, you buy it", as he did not want the shop's guitars to be scratched. This led to his purchase of "The Yellow Guitar", a Danelectro that had been used for a photo shoot and was painted yellow. Goldrich required customers who wanted to try different guitar effects to use this guitar. George Harrison tried to buy it, but Goldrich did not sell the guitar."

Yeah, not missing that.

For a kid from Jersey that was our mecca in the 70s. And the Academy of Music, The Garden, etc.