The new inexpensive Ibanez Artcore series models similiar to this one:

I think there are several models in this line (I would bet made in China)......Has anyone here tried them? If so, what are your thoughts about them? Thanks!

I may be just an outlier, but the Artcore that I used to have was an absolute piece of crap. But it looked cool and that's what mattered to me when I bought it. It was my first semi hollow and I had to use it as a practice guitar only because the stock electronics produced the worst guitar sound I've ever heard. The guitar was a struggle to play, but in a way that was a good thing for me at the time because it forced me to play the notes with more precision and taught me to rely on my fingers more for tone.

I would not buy one ever again. But I may have just got a lemon...

I used to have one of these. It was my only guitar for about a year and I played the hell out of it. I had zero problems with it and it got a lot of compliments. The electronics were about what you'd expect for a $200-300 guitar, but it played great.

I've had 2 Artcore models. Neither seemed to have the mojo I was looking for, but fit and finish were fine. Go figure. I've tried a few of them, never owned one. Lots of folks love the AS93 - I tried it 4 or 5 times and one time I was able to A/B it with a Reverend Manta Ray. The Rev blew it away tonally - and I preferred the neck of the Rev. I did like the AS93 better than any of the Epiphones I tried. I also tested it against a PRS SE Semi Hollow which I thought was way better too.

I doubt I'll ever own one

Worked in a small shop that carried a few of them. I was always impressed by them right out of the box but never bought one.

I had a 2004 Ibanez Artcore TXD-71 Talman semi-hollow. I really regret selling that guitar. Never sell a guitar because it doesn't fit your band style, because bands come and go. Saw it in Guitar Center about 5 years after I sold it and didn't have the bucks to buy it back. Someone else got it.

The guitar that seemed to be really resonant and played well and had a good vibe was - ironically - an Ibanez. It was a Limited Edition AM83 - which is basically a AM73 in a limited edition finish. I didn't care for the stock pickups -they weren't the worst [just dark sounding], but I knew a set of Dimarzio 36th anniversaries would really cook it. So I got it, installed the new Dimarzio's, and later I did have the nut changed to a Tusq XL [I had to do something with it as I changed the strings/set up to "light top/heavy bottom" a 10-52 set]. I also installed a good set of matched alpha pots, some orange drop caps, new push back wire, switchcraft switch and switchcraft output jack. The pickups and nut/strings/set up are solely personal choices. Setting the amp a touch brighter would probably accomplish the same thing, and the rest is feel. upgrades cost me all of about $200 total, which along with the cost of the guitar broght me to about $700 - WAY under what most other hollow bodies were going for.

The guitar looks good, and plays/sounds amazing. Its the only non-US guitar I own, but it plays, feels and sounds every bit as good, and I'm never embarrassed to have it sitting next to my others at a show.

Here's an anecdote for you;

I was backing a reasonably well known blues guitarist and about 2/3 the way through the night his guitar crapped out [we weren't sure if it was caps, pots, loose wiring... just literally stopped working]. His spare was still in their vehicle and we would have had to wait several minutes for someone to run out and grab it and tune it for him [I was told later it was left in the vehicle because it was having issues holding intonation and they were still working on it, they thought his regular guitar - a Gibson LP - would get him through the night.]

To speed things along, I handed him my spare, which on that night was my Ibanez. He took it, though I could tell by the look on his face he was thinking he wouldn't be pleased. By the end of the second song with it he was digging it [you know how this goes - making body contortions and faces while playing solos, even giving me the "did you see that?" grin every now and then]. At the end of the night he thanked me, and commented that it played and sounded great. He asked how much it cost. I told him and he was shocked, and said he might have to get one. I said I had been very happy with it, but did change the pickups and give it a good set up.

He said with a grin "Wouldn't be interested in selling it I don't suppose?"

"No sir, but I'll take your interest as a very deep compliment."

I think I've got some clips somewhere of it rocking pretty hard too, ha ha!

The guitar in question; I've owned a few. They all played well and were finished very nicely. The pickups, while better than Epiphone's, were still pretty uninspiring. The other thing that always bugged me was the Fholes were disproportionately large on the Ibanez.

This one was a beautiful guitar. I had plans to put GFS Vintage '59's in it while they were available in smoke/black chrome but sold it instead. 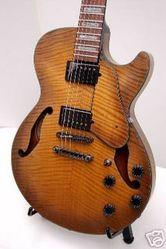 This guitar looks great and sounds beautiful through my Princeton Reverb! Rich sounding and versatile.

Cons....the tuners are not the best, but for the price of the package....a nice value.

The AM93 my buddy has is really nice. It's built well, and sounds proper too. I wanted those Custom ones with a single pickup, but never had a chance to try one out.

I'm kinda digging these... Might have to check one out.

I had one years ago, a 73 I think. The pups could've been upgraded but didn't really sound bad. Compared to the similar epiphones, the artcores have much better feel and finish IMO.

Great bang for the buck.

Under $1000, they are the best I've tried. Can't say a bad thing about them other than the pickups being just so-so.

onemoretime said:
This one was a beautiful guitar. I had plans to put GFS Vintage '59's in it while they were available in smoke/black chrome but sold it instead.

I think the Artcore's are fantastic value for money, and are great upgrade platforms for better pups and electronics.

I just got the new version of this one, the AGS73FM. Ordered it from a store in Germany, as they don't seem to be in the USA market. I realize I'm in the honeymoon period, but it's awesome and I love it! Fit and finish is as good as I expected, the neck is chunky and plays like a dream, and the stock ceramic pups even sound good (though that may all be upgraded down the road). I couldn't be happier, honestly...

ChicagoFraize said:
I have an AG95. This model with a Bubinga body. Mine was a discounted blem ($400) on eBay for what is normally $650 or more.

This guitar looks great and sounds beautiful through my Princeton Reverb! Rich sounding and versatile.

Cons....the tuners are not the best, but for the price of the package....a nice value.
Click to expand...

I just got an AG95 a couple weeks ago. Plays nice and looks amazing with the figured bubinga. I'm OK so far with the Super 58 pickups, but I could see an upgrade down the road. And as noted, the tuners are a little dodgy, but that's an easy upgrade.

I also have an Artcore AFB200 bass that I love. Another great value.

I own an NT105 semi-hollow, built circa 2007-2008. Fit, finish & fret work are fantastic. Stock electronics were crap. Stock nut needed adjusting, eventually replaced with a professionally cut nut. Stock tuners were bad, very sloppy, replaced with Gotoh 510's. Stock super58 pickups sound good in this guitar, but i nonetheless toy with the idea of putting a pair of Fralin P92's in just to hear the P90 "exhaust note rumble".

Bought second hand for $550. With a new nut, new wiring, and new tuners, my total investment so far has been about $800. IMO, the result has been well worth the effort (the quality of the neck and fretwork allows a low action without buzzing even when I dig in. This, and the upscale overall appearance of the finish work are the outstanding attributes of the guitar).

The bridge B string screw rattled a little and needed to be tightened at first, but other than that.... Threw a set of flat wound 11's on it. Plays and sounds fantastic. For $400, it can't be beat.