Came across a really old thread on TDPRI last night. Discussion of USSR guitars, they seem to have been created in a vacuum (not much American Influence) with interesting and sometimes hilarious designs. General consensus is that they sounded horrible, but I can't help but stare at a few of them, like the Orfeus Rocket.

The site below is still up! Check it out!

Wow, those tonika's are terrible. I like this quote:

What they've made is an unplayable super-heavy guitar with sick body shape, thickest neck you'll ever find and sound suitable for anything but music. 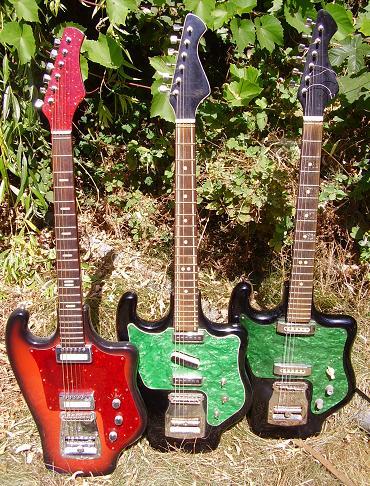 Here's the TGP special!
"telecaster" F holes, sunburst paint P90's, ashtray cover....all thats missing is the Princeton amp next to it and pictures taken with artsy filters from your iphone in indirect sunlight from your vacation house.

They have a vintage vibe. But I wouldn't want one. I wonder what they sound like?

They seemed to favor the zero fret. 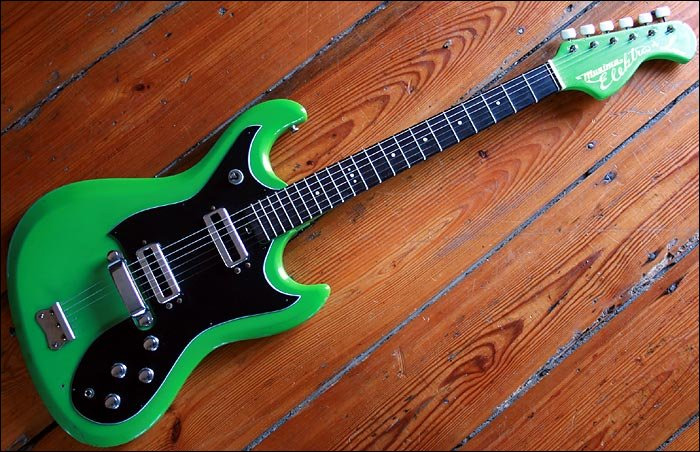 That is not an ashtray cover - that's from a JazzBass.
And on the headstock - I recall seeing those bars on Japanese
cheapsters in the 70s. I wonder if this particular builder
bought out a manufacturers odd stock or something?

blowery said:
"telecaster" F holes, sunburst paint P90's, ashtray cover....all thats missing is the Princeton amp next to it and pictures taken with artsy filters from your iphone in indirect sunlight from your vacation house.

I guess that if a musician was found to play a guitar that looked too American, they risked being sent away to a neck shot. Also I think that they could not sound too much like western guitars, since that would have been deemed "bourgeois" and "denying the true sounds of Soviet greatness"; also equal to being sent off.

I'm not kidding. The reasons for being sent to Siberia or to a neck-shot cellar at Ljubljanka were sometimes so futile and absurd that it's hard to believe.

I guess the Soviet electric guitar builders there were, did what they could, with what they had, under circumstances that never should be allowed to return to any society.

In Soviet Union not all guitars are red
D

You couldn't get me to take this one free with a gun to my head.

EADGBE said:
They have a vintage vibe. But I wouldn't want one. I wonder what they sound like?

I think this spacey 60s look is cool. Look at how skinny that neck is! If modern aftermarket parts could make the sound passable...You'd surely be the only kid on the block with one of those.

Kramer ..but remember this? I would totally rock one of those Tonikas. I friend of mine got a bass in excellent condition for next to nothing, shipped from Russia. I think they're so ugly, they're actually cool.

Those guitars are ugly compared to what we have but you have to look at them in the Soviet visual context that goes back to the Revolution. The Bolsheviks promoted all kinds of artwork to promote an aesthetic that manifested a visual lexicon of "revolutionariness". In 2-dimensional art they invented Suprematism which is highly influential these days in print because it conveys a sense of excitement and disruption (a commie trope so handily coopted to capitalism's self-promotion). I would be quick to admit that much Soviet architecture expresses the brutsl ugliness and inhumanity of Soviet political ideas that include willfully destroying the old just because it's old and the horrid idea of the creation of the new man, homo sovieticus.
The malformed 'kithara sovieticus' may be a purposeful expression of sov aesthetic ideology, or merely an accident. In the USSR there was this sovietizing project that extended into every aspect of life. Musicmaking was a fertile field for sprouting the ideological seed of collectivization, etc. into the wheat of daily consumption. For instance, folk ensembles of two or three were pumped up into huge orchestras with dozens of instruments, scaled up or down to produce a wide pitch range - the Osipov Balalaika Orchestra is something we've heard. They did this with Central Asian and Caucasian musical cultures and everywhere in the USSR. The Russian idea of substantial solidity and togetherness (or more accurately, unamimity) was a prime export to the Small Peoples' Republics.
But when we come to electric guitars, we are talking Late Soviet, where the state got involved in the technology of entertainment and leisure. There's a great deal of the artifacts of this culture still around, which era launched many brilliant musical careers (check out the young Alla Pugacheva- HOT visually and musically). The politicians hired artists and artisans to populate the realm of popular culture making use of the language they'd developed since the Revolution. They built Lunaparks all over the USSR and hired youth directors to keep kids happy and safe, and promoted bands to play dance music that expressed a sov sense of fun. Of course it had to be futuristic, but not cruel or overtly rebellious - that would risk going beyond Socialism's boundaries. Notice a lack of points or sharp edges on any of the designs above. Suggestion of phallic propulsion, sleek and smooth (sort of) but not weapon-like. It's almost like they didn't want the kids to be able to play very good music but just have fun bashing out something with a beat. Soviet and Russian craft culture is nothing to sneer at, so I am guessing these guitars were not the product of an awful lot of thought, since the marketing horizon was so low and also without what we would consider risk.
It would be interesting to listen to recordings made with such instruments. Does anyone know of any examples?
Last edited: Jan 6, 2017

Way too many Strat headstock copies there to say they didn't have much American influence. And the Aelita I:

I'm actually building an Aelita body for a good friend this year.