Is this change in price normal? Amazon related....

I was so happy when I saw that Amazon had started selling my favourite set of strings for my Strat in E flat (i.e. GHS 10 to 38 Boomers). Roughly £4.50 a set.
A couple of days ago I put an order but did not finish ordering as I wanted to check if I needed anything else first. No big deal, I thought.
Today, the price has increased significantly.

Is it normal for Amazon to do stuff like that? If they stay at that price, I'll switch to Newtone. Same construction, probably better materials, cheaper and handmade here in the UK. You can choose your custom sets at no extra cost...
Last edited: Sep 19, 2020
J

I bought some $2000 equipment and the vendor refused to honor the price. I think they just changed their mind. Amazon basically told me "tough luck. We'll request a refund for you." So amazon acts like it's no longer a market, but more like a shopping mall owner/landlord, not responsible for the actions of those "independent" sellers.

If they aren't careful, they'll turn into a third-world bazaar like "feebay" (eBay). Some say they are there now.

jturner said:
yeah, algorithms play all sorts of games with product pricing. Just wait 'till you see an old textbook jump from $10 or $12.00 to $40,000 -- it's just algorithms running the show.

I bought some $2000 equipment and the vendor refused to honor the price. I think they just changed their mind. Amazon basically told me "tough luck. We'll request a refund for you." So amazon acts like it's no longer a market, but more like a shopping mall owner/landlord, not responsible for the actions of those "independent" sellers.

If they aren't careful, they'll turn into a third-world bazaar like "feebay" (eBay). Some say they are there now.
Click to expand...

Great insight... thank you. I wasn't aware that prices are dictated by algorithms. That explains a lot....

Yeah, it’s happened to me in the past.

This happens all the time. When the algorithm detects you are about to buy something, prices strangely increases itself.

I think the algorithm has noticed that the "Hendrix" gauge is gaining some popularity and it wants to cash in...

Seems to go up on weekends

AgentDouble said:
This happens all the time. When the algorithm detects you are about to buy something, prices strangely increases itself.

or decrease, i’ve played that before. left an item in the cart for a couple of weeks, checked on it several times until they gave up and lowered the price.

Saw a Behringer Super Fuzz for $40 cad on a Thursday night. Thought, "oh I get paid tomorrrow, I'll buy it then". Friday morning, $45.
W

Before I buy anything on Amazon I always check price trackers like: https://uk.camelcamelcamel.com/

Lets you see the price history for low prices and fluctuations. Plus on some occasions I've found the price offered to me isn't the same as what's offered to others. 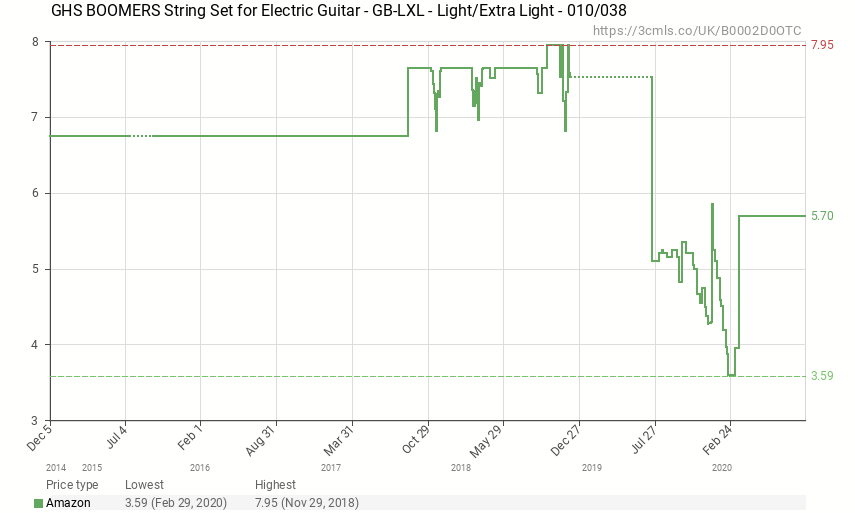 Unfortunately Amazon "asked" the sites (who rely on Amazon referral links) to stop tracking data after the virus lockdown so there are large gaps in data since March.

Gee, I wonder why they didn't want people to track prices during the lockdown...

Could also be from a different seller....

It seems that price fluctuation is part and parcel of buying online.

Indeed. Prices on PPE in the early days of the pandemic went up 1,000% on amazon, Bezos is one rich mofo.

I guess the best approach is not to be hasty and wait until you have a good price and then buy it. Obviously, such approach involves valuable time so... it might end up being counterproductive. It'd be difficult to outsmart Amazon.
V

I'm wondering if at least part of the price fluctuations are not due to changes in the various currency exchange rates. That could account for quite a bit of change.
Last edited: Sep 20, 2020

Doesn’t it also have to do with which vendor/supplier/distributor is designated on a particular day? Which one has stock on hand or whatever?
V

While what you describe does not obtain in the real world, there are many computer programs that vary in price in a country-dependent manner. MS Windows is a good example, but another example would be (or was, at any rate) SwarPlug, which is much cheaper in India, compared to what it costs for someone in the USA.


And, now that I think about it, some software varies it price in a platform-dependent manner: at least in the past, a Mac version would, at least for some software, be more expensive than a Windows version. (I can't recall any specific examples right now, but I am quite sure I have seen it in the past.)


Of course, all this is quite orthogonal to the original post.

I've bitten the bullet on the Newtones. One set fitted so far (12-54, old school!) sound superb on a strat. They're the 'twangy' ones.

I've got a couple of sets of my usual 10-52 in round and hex core, that's the next set of guitadmin jobs to fit those.

Made in Tansley. I used to work at Bakewell, so it's somewhere I know of (one of my work mates had a farm near there). Not that any of that guarantees the product, but it does make me feel like spending £8 a set is justified that little bit more...
You must log in or register to reply here.
Share:
Facebook Twitter Reddit Pinterest Tumblr WhatsApp Email Link