I bought myself a Jazzmaster for my birthday and I've encountered nothing but problems. I've owned a strat since I was 14 and also have a custom strat I really love I bought when I turned 28. Well, in what I thought would be a great move, I purchased a jazz master. I've always wanted a Jaguar, Jazzmaster, or a Mustang and I finally decided. Well my problem is that I can't even tune it properly , even when my chromatic tuner says it's in tune, the strings buzz and mute. Any suggestions or ideas? i've been playing a long time but i'm not skilled at working on guitars

Up until recently I'd never found a review on a major sellers website that was very helpful.. until I got a Squier Vintage Modern Jazzmaster and stumbled across this review on Musician's Friend:

The Jazzmaster isn't your normal Fender/Squier Stratocaster. Most people new to them do not know how to set them up, and some are ruined by the experience of a JM or Jag with a bad set up. So here's a quick tutorial to make the Jazzmaster into a real player.

Most problems encountered by people who are new to these guitars is the strings will pop out of place constantly, it's simply because it's not set up right.

First, take those 9's off of the guitar, you'll want heavier strings, at least 11's. Remember this guitar was designed at a time when the lightest gauge string was 12's, but 11's work just fine, I wouldn't go any lower. I say this because light gauge strings don't have enough tension and combined with the low break angle of the bridge, the strings will pop out of the saddles, but with heavy strings, they'll stay in the saddles,

Second, take the neck off, and put a shim in the very back of the neck pocket, 2 or 3 pieces of a business card stacked on top of each other will suffice, then put the neck back on. What this does is provide more break angle to help keep the strings on the saddles.

You may notice that the bridge is right up against the pickguard, and the saddles are raised way up, with the intonation screws touching the playable part of the strings. This is completely wrong.

When you set the intonation, it's extremely important to hold the bridge in the center of the thimbles, it was designed to rock back and forth when using the trem, and if you let the bridge go forward during intonation, everything will be off.

Now, with the neck shimmed and the bridge raised up, and using heavy strings, you won't have any problems with rattles, or the strings popping out of place. Of course going up to 11's will require a little adjusting to the truss rod, Intonation, and to the spring adjustment screw of the trem (it's the screw right next to the whammy bar)

That's all there is to it. But you might encounter another problem. New Jazzmaster/Jaguar bridges and saddles like to lower themselves while you play. If this happens, reset your action, then get some good clear nail polish. Brush the polish onto the saddle height adjustment screws, that will keep them locked in place, until you decide to make more adjustments. Due to the intonation, one or two of the screws might touch a string, if that happens, you can move the string over a little to keep them from touching, unless you like Sitar sounds.

Also, if your entire bridge lowers itself, readjust it, pull it out, and apply nail polish to the height adjustment screws. Be careful not to cover the entire screw with it, because it will prevent the guitar from being grounded, and you'll get some nasty hum.

This tutorial isn't just for Squiers, the things I've described have been done since the first Jazzmaster left the Fender plant in 1958.

Also, a few more tips, Lubricate the nut, I personally use a small dab of Lip Balm in the nut slots, it'll last for a good while, and it keeps the strings from hanging up in the nut.

If you can't raise the bridge pickup enough, you can uncrew the four screws that hold it on, the pickups are screwed directly to the body, and use a thick foam pad instead of springs. If you need to raise them higher, cut a couple pieces of cardboard from the box the guitar comes in, lay them in the pickup cavity, and screw the pickup(s) back down. Now you'll have a lot of extra height to play with.

Oh, also, the whammy bar will lock into place, instead of spinning around freely, push it in as far as possible. It'll be a bit difficult to get it in and out, but it won't fall out, and it'll stay where you want it.
Click to expand...

Bieling3 said:
Up until recently I'd never found a review on a major sellers website that was very helpful.. until I got a Squier Vintage Modern Jazzmaster and stumbled across this review on Musician's Friend:
Click to expand...

I had a jm for years and years... I had tried the mustang bridge thing just for fun but didnt need to.

As stated above, if you have 11s or higher 90% of your problem solved. I never had to shim AND use 11s.. always one or the other.
I never had an issue on that guitar with the saddles walking down but the nailpolish thing works.
The only offcenter thing I did was go to a local hobby shop and pick up a foot of brass tubing. I realise I am lucky now but the tubing I had fit perfectly outside the posts but inside the hole. Kept the bridge from rocking (I never use the trem anyway).

I think the Squiers even have TOMs so walking saddles and wobly bridges are a thing of the past.

JM are THE most comforable guitar I have ever played sitting down.. they just hang there.
JMs also have some of the noisiest single coils on the planet. I play clean (jazz mostly.. on a jazzmaster... not something you see everyday) and I was pretty much stuck in the middle hum cancelling position.
(and not poor shielding hum.. honest to God single coil hum). Mine was CIJ and I undid the complicated wiring.. one volume.. one tone.. one 3 way switch.

SamBooka said:
JM are THE most comforable guitar I have ever played sitting down.. they just hang there.
JMs also have some of the noisiest single coils on the planet. I play clean (jazz mostly.. on a jazzmaster... not something you see everyday) and I was pretty much stuck in the middle hum cancelling position.
(and not poor shielding hum.. honest to God single coil hum). Mine was CIJ and I undid the complicated wiring.. one volume.. one tone.. one 3 way switch.
Click to expand... 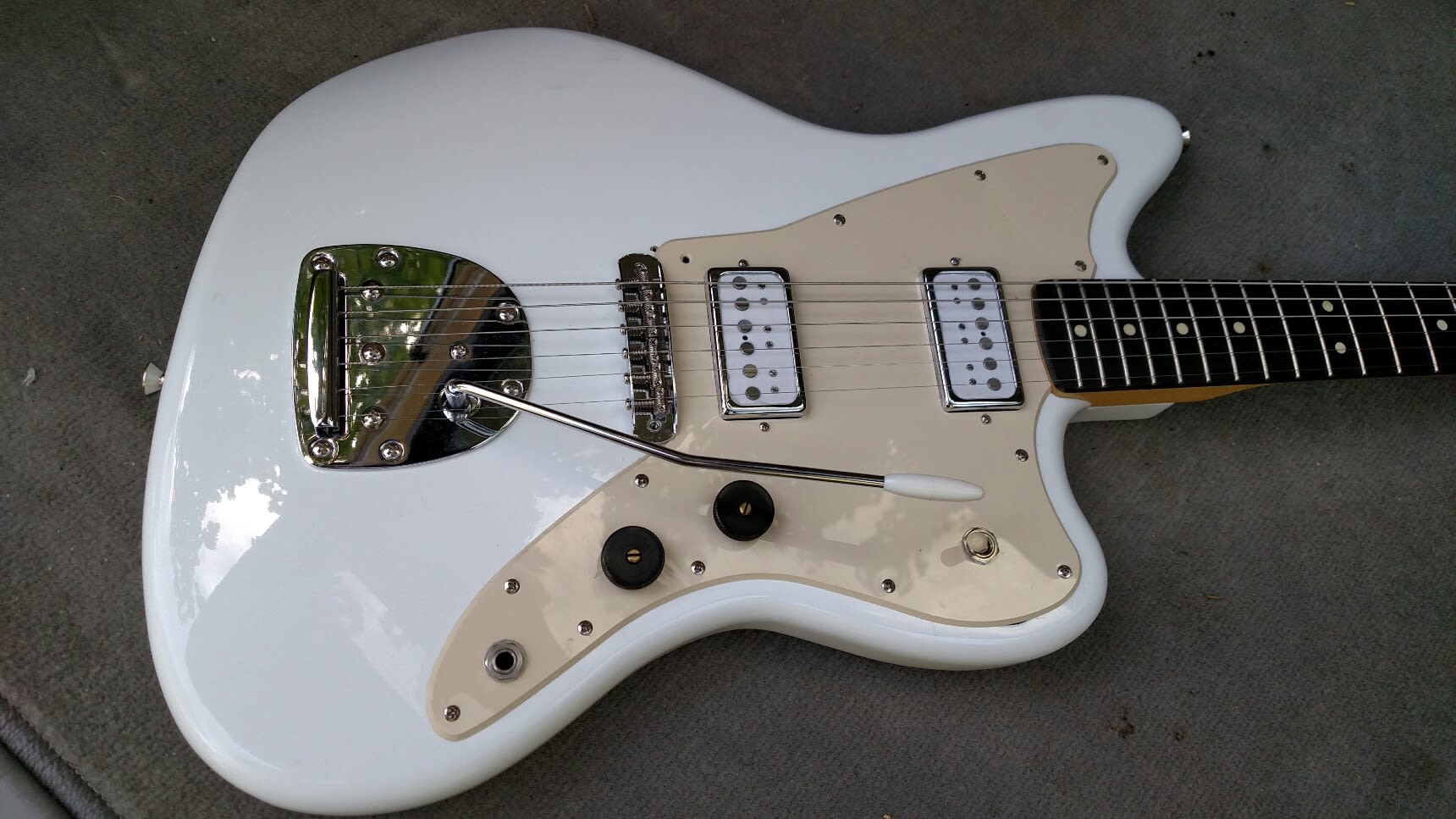 I have GFS Surf 90s in mine and they have the least hum of any single coil I've ever used. I also have a mint green pickguard I'm going to replace the nicotine colored warmoth one that doesn't fit right. I'm putting the rollers back in so I can have a volume for each pickup, and a series/parallel switch (along with a master volume and tone). I hope all the extra wiring doesn't introduce noise...

Back to the OP's topic sometimes I have to give a gentle push up to the bottom of the bridge when that subtle buzzing starts to appear. Goes right away. I'm hoping a set of 11s will cure that.

I have to assume that the used market for Jaguars and Jazzmasters is overflowing with mint condition guitars.

These are guitars that I think far too many people (OP included, I assume) buy simply for the looks, or because they see one of their heroes playing one. If there was one guitar that you absolutely MUST play before deciding to buy it's these guitars.

The funny thing is they were perfectly decent guitars when Leo and Co. designed them back in the day, mostly because back then people were primarily using fairly heavy gauge flatwound strings into very clean sounding amps. And these guitars play and perform great under those circumstances. But folks these days want to rock out with their 9 roundwounds into a Big Muff and inevitably encounter problems with Jags and JMs. Yes, there's Buzz Stops and tune-o-matics and Mastery bridges and all the rest, all the little tricks to make these guitars work for modern styles of music, but it's just not what they were designed for in the first place.

The lesson is don't buy a guitar purely for its looks.

I got my first and so far only JM in a trade. It's a Fender CS. had a Buzzkill on it which I immediately removed and it has been fine with .010s and the stock bridge. Not sure if the CS uses an upgraded version? I did order a set of .011s for it though will install next time I have a chance.