valvestate said:
... and it was amazing! I'm a bit baffled though that even my wife commented how can the guitarist do all those sounds.. i was like thinking, that is impossible for the Edge to do all those sounds in "With or Without You" or "In The Name of Love (Pride)"

So I assume they're all using some pre recorded licks and samplers right?? Not really a problem with me but I feel that it just kinda takes away the 'rawness' of a live performance.

Edge switches guitars every freakin song!!! Lol!! He still hasn't found what he us looking for I guess
Click to expand...

Tell your wife it just takes a few more pedals 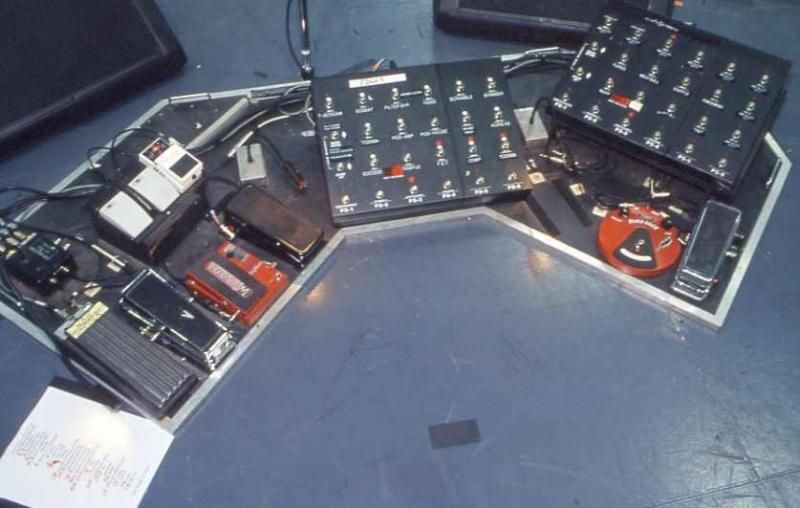 I choose to remember them from the Red Rocks DVD- no backing tracks necessary...

freedom's door said:
I choose to remember them from the Red Rocks DVD- no backing tracks necessary...

I was there and the free show at CU the next day.

Tootone said:
Was this live in Singapore?

I can honestly say after seeing them in Perth, where I was right at the front and right next to his "Dry" AC30... Edge is playing 99% everything... cos I could hear it straight from his amp.

However, he splits his signal and runs the splits through different banks of effects... Multiple Delays and Shimmer Reverbs are the obvious ones.... and under the Stage... Dallas Shoo is controlling the effects... expression pedals, faders, mixers etc...

The Edge still has some effects control from the stage (like the Whammy in Even Better Than the Real Thing) , but a lot is done by Dallas.

But there were definitely moments where I could hear violins/strings, and other orchestrations... I would guess these were live and played by session musicians off stage... because Bono has a tendency to go off on a "beautiful people" monologue... not sure a backing track could handle that.
Click to expand...

yes! I went last Sunday in Singapore! Awesome but I feel very old... I'm seeing the majority of the crowd are like 40 + even 60s! LOL! Amy I already that old ?!?

I just wished I opted for the standing for better view of the EDGE's guitars and chops! The overall sound was also too trebly and echo-ey from the upper seats and I thought I was the only one noticed that. I read from FB that others were pissed off with the sound mix.

Nevertheless the overall production was A+!!
Last edited: Dec 3, 2019

Tootone said:
Because the church elders have theologised and concluded that God doesn't have a problem with The Edge. In fact, God likes a bit of U2 through his earbuds when he is smiting. And the Angels are still trying to nail the Streets intro on their harps.
Click to expand...

As a Church player, Dotted 8th efx is God-sent!!


flume said:
Hiding a real human under the stage kinda bugs me.
Click to expand...

is this even true?!?? That's hilarious!

I know his guitar tech also controls his effects off stage right??

Edge was playing at the far side of the stage so it is impossible for him to
'remotely' trigger the different guitar sounds.

If you are a Rig Rundown fan... This is a pretty good one. Not sure if he's got a second guitar player but he does have a great Tech doing a lot of his dirty work.

I wonder if Brian Eno is still on their Christmas gift list.

A U2 concert is a spectacle. It is the circus coming to town. It is a magician doing tricks with the most advanced tech available. I suppose one could go to a magic show looking to figure out how the tricks are done, but the purpose of the show is to entertain. If you take it like that, there is nothing like a U2 show.

jasons7 said:
If you are a Rig Rundown fan... This is a pretty good one. Not sure if he's got a second guitar player but he does have a great Tech doing a lot of his dirty work.
Click to expand...

A lot of rumors that Dallas is playing guitar for a few songs during the shows... I doubt it, as he is pretty busy with getting the next guitar ready, and switching around his rig.

mikebat said:
I will never understand the guys who get all huffy and puffy when it comes to a band playing with a sequencer or backing tracks...
Click to expand...

I think it is expected in a band where there are 947 layered guitar tracks, that there is going to be some trickery going on in a live performance. it does not phase me as I want to hear a sound as close to the album as possible when going to see a live band.

Many say that U2 is responsible for turning music into corporate spam. Apparently, they "gifted" their Songs of Innocence album to Apple, for the specific purpose of promoting the sale of Apple products.

MBreinin said:
I think it is expected in a band where there are 947 layered guitar tracks, that there is going to be some trickery going on in a live performance. it does not phase me as I want to hear a sound as close to the album as possible when going to see a live band.
Click to expand...

It also doesn't help that Bono can not play guitar now after that bike accident. he wasn't a great player, but could add a little rhythm into the mix.

I wouldn't be surprised if the self-worship crowd actually believes this.

Goldfinger62 said:
Many say that U2 is responsible for turning music into corporate spam. Apparently, they "gifted" their Songs of Innocence album to Apple, for the specific purpose of promoting the sale of Apple products.
Click to expand...

What is corporate spam? Are you referring to "bundling" That is completely different. The U2\Apple deal was a marketing deal where U2 released their album for free to millions of Itunes users, and Apple had them play at an Apple promotional event. I doubt anyone went out to buy an Apple iphone so they could listen to Songs of Innocence... If you are talking about the Apple\U2 tv ads... those are from 2004 when U2 put out the U2 IPOD.

Goldfinger62 said:
Many say that U2 is responsible for turning music into corporate spam. Apparently, they "gifted" their Songs of Innocence album to Apple, for the specific purpose of promoting the sale of Apple products.
Click to expand...

To me...people who freaked about that are over reacting.

Firstly, if people feel violated that someone gave them a gift, throw it away. How hard was that?

To get to the heart of it, since albums sales have vanished, all artists, especially those who have the most $ to lose, are trying to figure out how to make money with the $700k+ records they record. Foo Fighters filmed that HBO special, which certainly made them more money than the cd sales. The U2 gift was a way for a corporate sponsor to pay them in lieu of getting record sales money. Other bands do it with exclusive internet delivered content, others with paid meet and greets. Every artist is trying to figure out the new economy of music. No one seems to be as outraged when a hip hop artist such as Jay-Z does something to make money capitalizing in his fame, but when a rock musician does...he is damned.

No one says it is a perfect, artists are just figuring it all out. What U2 did was just an attempt to keep making money, but they catch a lot of flack because of Bono's declarations about a social and political matters and because the Edge uses delays and is not Clapton, Malmsteen or whatever guitar hero they prefer.

The outrage was so misplaced, in my opinion.

mikebat said:
To me...people who freaked about that are over reacting.

Firstly, if people feel violated that someone gave them a gift, throw it away. How hard was that?
Click to expand...

In the end is the way it was "forced" on all itunes users, but that is the only way it was going to work (if it worked at all)... It's like when you get a box from Amazon and they have those free promos for wine.com or whatever. It's probably 1 in 100,000 actually signup up for the wine, but if they included a free bottle of wine in the box, how many people would not drink it?
C

martyman said:
Jeez, what inspired you to bring in that last bit?
Click to expand...

Call it a fun fact? By the way, I've got nothing against Bono/U2 etc. War is one of my favorite albums ever. I think Bono's "alleged" dual life is in the same vein as the band having that dude under the stage all these years. Like, wha? Not what I expected. Certainly brings things back down to earth.

Regarding the hostage keyboard player, I'm sure there is some explanation from the band regarding "It's how the fans want to see the band". Sure they do, buuuuut I'm gonna imagine that hyper-egomania has more to do with it. John Mayer tours with a bunch of old dudes onstage with him. David Bowie toured with all sorts of different players. Prince toured with all sorts of musicians. Pearl Jam and G n' R have toured with extra musicians. So have Radiohead and the Rolling Stones. Smashing Pumpkins toured with extra musicians in their heyday. Oasis brought out extra musicians for special gigs. That's nearly every other band at that "legend" tier from that era.

And then there was the whole protest at Glastonbury years ago, after U2 dodged paying Irish taxes by moving their business to the tax-friendly Netherlands:

U2 does use tracks, but not on every song and what I LOVE about them is they don't use it for the lead vocals and as far as I can tell for the harmonies either, Edge seems to be able to cover most of them. Also - on the last couple of tours when they did have tracks they were pretty blatant about it playing video along with it that made the backing track part of the whole experience, not just trickery.
Now bands like KISS are using backing tracks in a very deceiving way to the point where Stanley is lip syncing his parts, that is very sad and NOT rock n roll at all.

flume said:
Kind of a bummer. I thought maybe they had an occasional keyboard player onstage for a few songs. Hiding a real human under the stage kinda bugs me.
Click to expand...

Used to be very common back before ruggedized computers / laptops for players to have a dedicated "understudy" on tour with them to cover some of the multi tracked album parts. Andy Summers used one that sat on a folding chair behind his amp stacks for both the Zenyatta and Ghost in the Machine dates when I saw them. I can't remember his name (caucasian guy with a mop of curly hair), but at one show- Andy actually pointed to him and called him by name over the PA when he "prairie dogged up" at the end of one of the shows I saw. It's still not uncommon for bands to have their guitar/bass techs (roadies) pitch in on a song or two (with instruments and/or backing vocals) from off stage in live sets as well. If you've got hot spare amps running...
You must log in or register to reply here.
Share:
Facebook Twitter Reddit Pinterest Tumblr WhatsApp Email Link