Markv7 said:
This is me as well. I’ve said the same thing before. Although my strat isn’t a custom shop. My tele and les Paul don’t get a lot of love these days. Very nice! With those two it's hard to imagine a base you couldn't cover.
S

Ridgeback said:
I've tried many that had factory Bigsbys and even owned a great one that had been converted as you suggest (photo below) . Tuning stability was an issue on all of them, even with two different "pro" setups, and I don't play with a heavy hand. I keep searching.

edited to add that I have had Bigsby guitars with no tuning stability issues, just no 335s (yet). Sure wish I could have kept this one. It was special until it went out of tune after about 10 minutes with minimal and light, Bigsby usage.

Did you try one with a Schaller roller bridge? I find that makes a vast improvement in tuning stability. Locking heads and plenty of graphite in the nut slots help too.

Telechamp said:
I love my 2017 335 Studio that I got in the famous CME blowout. Grabbed it for a song (pun intended) and still can't believe how much I like it. 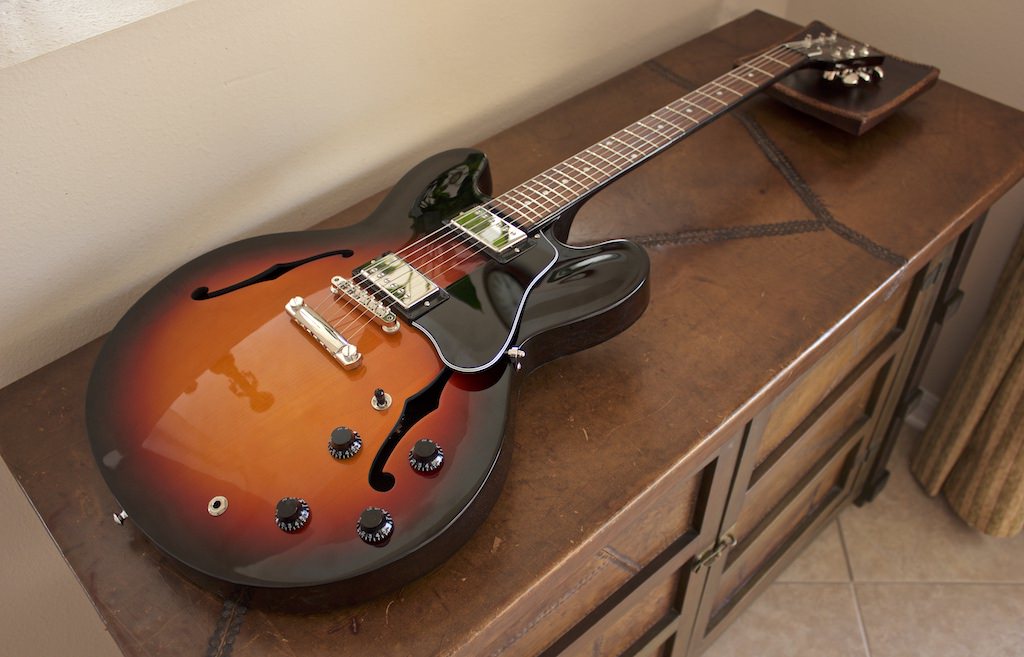 That CME sale will live on in the annals of GAS history. I picked up the beauty below, love it from tip to tail and it'll be the last guitar in my collection I ever part with! 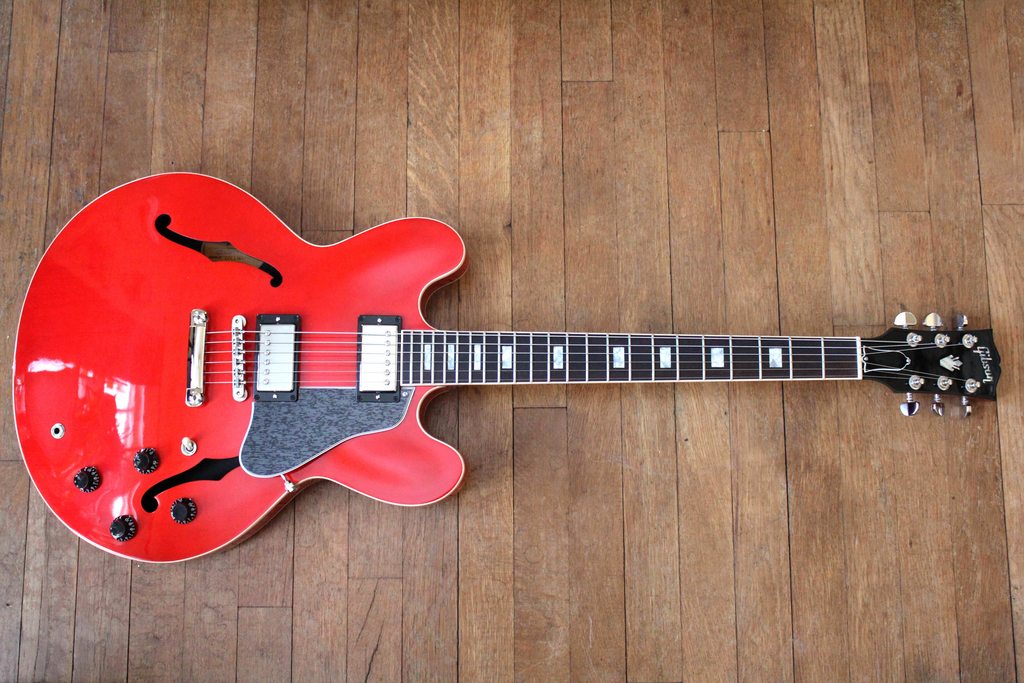 Don't play mine as much as I should. I find it a little large uncomfortable compared to my others, but there's no questioning the tones or versatility of a 335. '84 RI with push/pulls on both pups 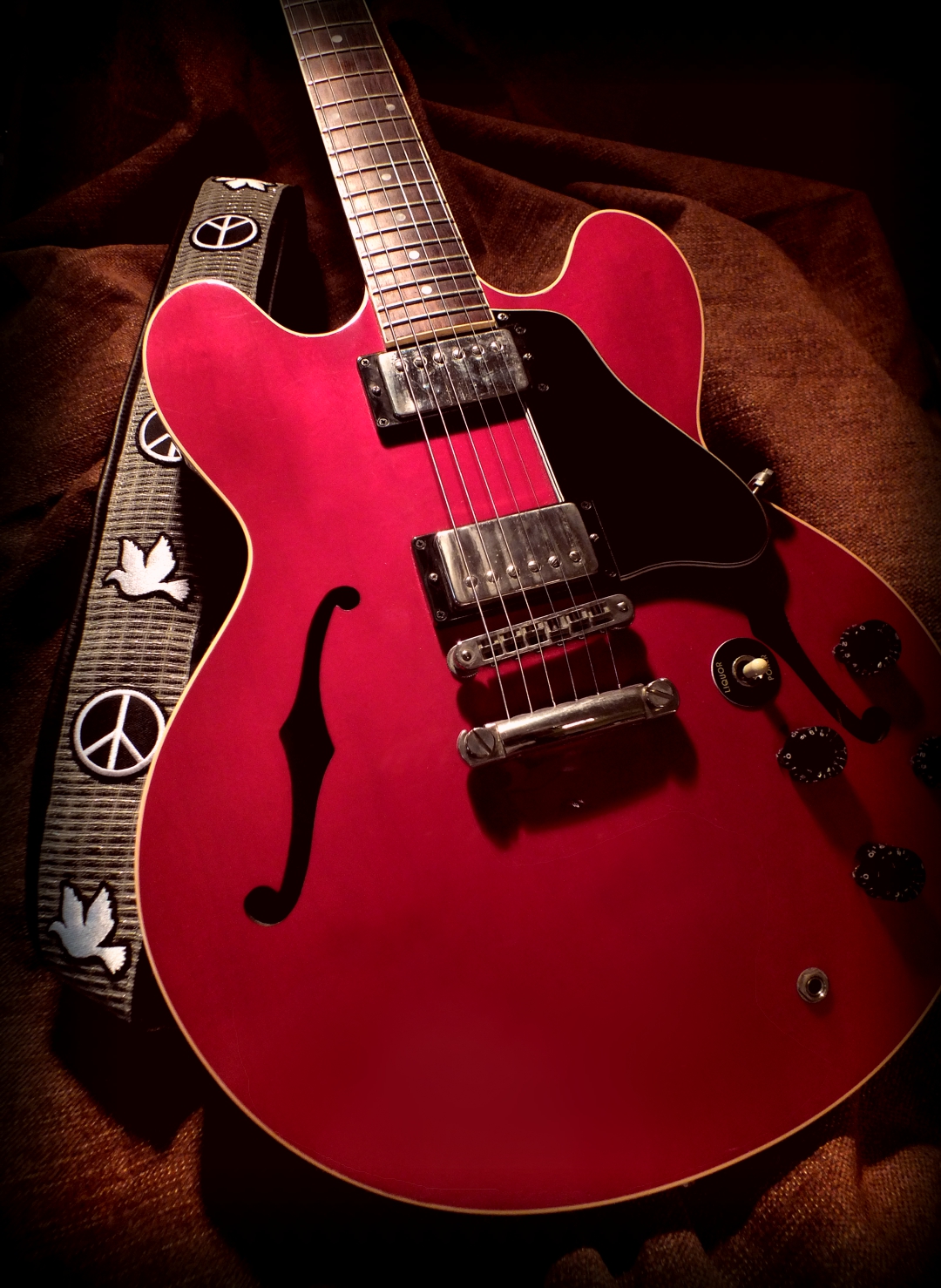 I aspire to be the latter

Geeze. I'm not even a 335 fan but this thread is awesome. Lots of great info!

Were all the vintage 335’s and similar models solid top or where some laminates?

Here’s my CME sale 335. The necks are larger than previous 335s with the slim taper neck. More like a 50s neck on a Traditional. I love mine and don’t have a LP any more. The best of the best of the 335s I have had over the years.

I want the new charcoal sparkle.

JumpinBradFlash said:
Were all the vintage 335’s and similar models solid top or where some laminates?
Click to expand...

I’m weighing up laminate and solid top options from Eastman ATM. A 335 is out of my budget ATM unfortunately

The main difference appears to be the potential for more feedback in the solid top? I assume there’s other differences in tone, etc

I’m weighing up laminate and solid top options from Eastman ATM. A 335 is out of my budget ATM unfortunately

The main difference appears to be the potential for more feedback in the solid top? I assume there’s other differences in tone, etc
Click to expand...

Somr might think I'm crazy, but I hear a funky kind of quality often in the laminates. It's a big part of what I love about them. Not always and using effects can kill it. Generally the cleaner and quieter, the more I hear it. I can be elusive but to me it what a 335 is all about. The solid tops IMO tend to have a purer sound, whether that's better or worse is a matter of taste. The one carved top semi I had was a CS336. Those do have a smaller body and that's gotta be a factor, but I thought it had a really different character. Very nice, but I'll take the lams. A lot of people would prefer the solid carved top though.

Jayyj said:
To my knowledge, the earlier 345s (90s and early 2000s) were small run custom shop affairs, then when they included a 345 in the Memphis love up it's usually been placed in the standard series so following similar spec to the 335 Dot, the ones I've played having fairly medium C profile necks. 345s and 355s were officially dropped from the line up in 1981 and didn't come back in any real numbers until the Memphis operation was up and running, so they're a bit less ubiquitous than the Dot RI.

More recently there have been year specific 345 reissues, which follow the 335 reissues in terms of neck profile and horn shape. I haven't had much experience of them, I think I've only played one which was a '63 or '64 reissue, I can't remember which. I have a couple of original mid 60s 3*5s and that reissue was very similar in terms of neck profile and body shape, although I didn't think it sounded much like the originals. Still a very nice guitar though.

There was a non varitone version doing the rounds as well just before the ownership change, although I've never seen one in the flesh, and a spectacularly cool signature model for a Japanese guy whose name escapes me.
Click to expand...

Thanks ! Not sure what the asterisk means( original mid 60's 3*5s) but I do know that in terms of how they originally sounded the varitone apparently tends/tended to drift over time plus Gibson tried a few things to eliminate some of the weight. It's interesting that a number of 345's made it to the U.K as used by everyone from George Harrison to Tony Hicks(Hollies ) and many other British Invasion players - far more than was seen here in the U.S.

gillman royce said:
Thanks ! Not sure what the asterisk means( original mid 60's 3*5s) but I do know that in terms of how they originally sounded the varitone apparently tends/tended to drift over time plus Gibson tried a few things to eliminate some of the weight. It's interesting that a number of 345's made it to the U.K as used by everyone from George Harrison to Tony Hicks(Hollies ) and many other British Invasion players - far more than was seen here in the U.S.
Click to expand...

Yeah, some old varitones sound better than others these days - the one in my '65 355 is pretty useless but I've played others I enjoyed messing around with. There's a few other issues with the vintage ones, such as pickups out of phase (which sounds pretty cool but means you don't have the classic 335 twin pickup tone), a weird loading issue when you use a stereo to mono lead or rewire the jack to mono and the vintage varitone isn't true bypass. Still, it's kind of cool.

I always think of the 355 as the Brit model when it comes to 3*5s - Johnny Marr used one on a lot of early Smiths TV promos then Bernard Butler and Noel Gallagher both adopted the model. I find whenever I get talking 355s on Instagram it's not long before one of us says so, hey, are you a Smiths/Suede fan? Me too! And there's a few Noel guys on there too. So if we get to claim one 335 model for the Brits I vote 355!

rickt said:
I've owned 2 335's. Once was a 335-TD in the walnut color and the other was a sunburst dot-neck reissue. Both were nice guitars but I'm not a tall person so they felt very big because they are big guitars. The TD was in need of a fret job and other minor adjustments but I did not have a lot of money at that time and played it as it was. It had a really nice tone and was easy to play. The sunburst was a better guitar and it was the better sounding of the two. But, I just could not bond with those guitars. I eventually sold them and bought something else.

If you've got the itch and the cash, then buy one. I don't subscribe to the "its like a 335 but cheaper" crowd because there is nothing like the real thing. But, and I stress this, you need to see it, smell it, hear it, and play it before you buy it. My experiences with Gibson is there is a lot of variance in the guitar sound and feel. Playing the one you are buying will help you decide.
Click to expand...

Lot of 335 love but I have to be in the try one first category. I gigged my 335 last week and while I am tall, I still find it to be an awkward large platform. I play standing and between the strap button on the heel and the size of the guitar, the neck and knobs felt out of reach. I realize there is an element of familiarity with other guitars I use and I would get used to playing the 335 if I invested the time. But I am just having a much more comfortable ride on other guitars. Sonically it is just fine and covers the music I am playing no problem. Maybe if I played sitting I would like it better. I have had one for years and it has never stayed my gigging guitar for long. Like more than a couple of shows. I have also considered having the strap button moved to the "ear" but that is kind of an involved no going back process.

I have wanted to like the 335 for a while now. And I haven't quite given up. But I am beginning to get a message that they may not be for me. As for gotta be a Gibson? Nope. There are a lot of brands that scratch that itch once you open your ears.

They do look good though. 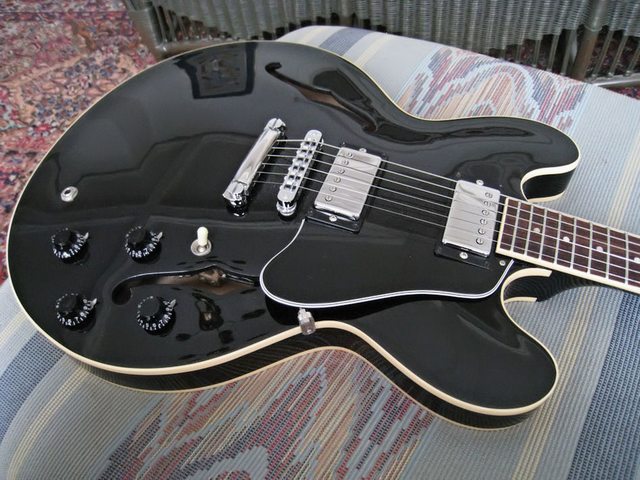 I myself have been on hunt for a 335 as of late. It's a sound that has resonated with me for many years. I've been researching in an effort to do my due diligence prior to committing, what to me, is a rather large sum of money. I've tried to heed what many others have said about playing before purchasing, but given my geographic location, it's near impossible to find one in any local music shop. I've decided to take the risk of purchasing online. I was quoted a good deal on a brand new figured 335 and told they had a no questions 45 day return policy. Have any of you had much experience buying online? Anyone have any info to share regarding the new run of 335s? I've heard that the Memphis factory has been recently shut down and the new/current production guitars will be manufactured in Nashville once again. Any information you could share with me would be vastly appreciated.

I had a moment of doubt with my CME-blowout '58RI recently. I was finding it really difficult to play and was considering either selling it outright or trying to trade it for one with a smaller neck. I decided to work on the setup instead and realized I could lower the action significantly without buzzing and now it's playing really well. I have flatwound 11s on it currently so I take a different approach to it than my other guitars but it has now rejoined the "never sell" list. For what it's worth, I really prefer the Heritage H535 with the input jack on the edge instead of out in front on the top.