So to date I’ve owned Maz 18/38, Stang Ray, Carmen Ghia, Prescription Rx Jr, Z lux, Z28 and the Galaxie. I currently own a EZG 50 and a Therapy. For reference I’ve also owned Bad Cat Black Cat 30/cub iii, Fuchs ODS, Savage macht 18, a couple divided by 13s, various Bogners Friedman’s and Mesas. For some reason I’m always drawn back to my Zs. There is a focus and immediacy to the tone that I gravitate towards. What Zs have you owned and what’ve you got now?

I've only had one Z- a Carmen Ghia. No other amp has ever done what that amp did to me. There was a connection between fingers-guitar-amp-speaker that I've NEVER experienced with any other amp. Ultimately, it wasn't loud enough for the band at the time and I started to miss knobs and switches so I let it go eventually, but I've never forgotten the magic of that Z.

I THINK that immediacy is present in all of his amps. Nowhere to hide with those amps, which is why they aren't for everybody. Friedman is like the opposite- play half way decent and you'll sound very good. Play great with a Z and sound like the heavens.

Right now, the Z Wreck 1x12 is the only Z in my possession. I'm eagerly awaiting the re-release of the DB4, though, and pretty much guarantee I will buy that when it comes out. Out of that list, the Therapy is the one I really miss, but I've sort of moved back to 1x12 combos lately and moved away from heads and 2x12's.

The only amps I've found that I enjoy as much as the Z's are the Komets.

I love the versatility and the quality of the construction. I haven't had much opportunity to play it much lately.

The Route 66, Ghia and Z-Master are still here. I question the need for the Route 66 at this point as I'm getting incredible sounds from the Ghia at level I can use and the Z-Master is basically the best Fender tweed I've ever heard.

Amps that shine on stage and that can be a bit "much" if you just want to chill out and listen to sweet, moderate volume sounds. They'll still sound great at lower volumes but they won't do it for anyone that loves to run their guitar controls on 10 all the time.

Love Mike. Love Z's. So much amp for the money new or used. I have owned (I know I have a problem)

I must say the Nova I just picked up is my favorite. Maybe the most dynamic amp I have ever played. Infinite shades of clean to mean.

Really none of these have been duds which is probably why I came back to some of the, multiple times. Haha. The Ghia was my first amp and it shocked me when I first plugged it in. So much punch for an 18 watt EL84 amp.

Currently, my main gigging amp is a Prescription ES head. I have also owned a Maz 38 and a DB4 as well. HUGE Z fan!

Maz 18 has been my #1 for going on 13 years. Almost every gig and rehearsal. Tone aside, the dependability is amazing; Workhorse doesn't begin to cover it.
Then factor in the tone, range, versatility....

Own a Therapy that is on permanent loan to my band mate, and he makes it sound good. I get a bit jealous here and there, and get tempted to swipe it back.
Own a Z-plus that's gotten a lot of work this year also, better home amp then a Maz.

Have owned a couple Ghia's, a Route 66, a RxJr (my least favorite), a M12, a Remedy, a Galaxie, Mini-Z head, a Jaz 20/40, and a DB4.
DB4 might be the best amp of his I've played. Can do country or Beatles to perfection, but can gain up also. Inspirational amp that I hated selling.

I'm in no place to be buying right now, but I hope to own a Z-Master one day...

I've owned a Z-Wreck combo (incredible amp!) and a Maz 18 Jr NR combo (loved it too, very versatile), and currently own a Carmen Ghia (below) where I just dropped in a well-used alnico Gold and it's stuff of magic.

Big fan of the Doc! 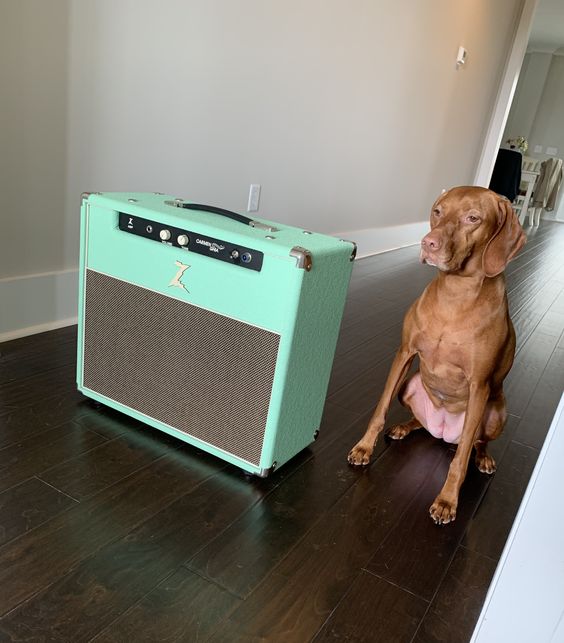 Through all of that, I keep going back to my Matchless amps, DC-3 and SC-30.

I've owned two Stang Ray heads, one with a matching open back 2x12 Z cab loaded with broken in Blues and the other with a Z 1x12 convertible cab loaded with a Sumback S75. Also used to own a Maz 38 2x12 combo.

I currently have a RxES 1x12 that was originally built for/owned by Tracii Guns. It's now loaded with a Scumback M75 65 watter. About two years ago, I sent the chassis back to Dr. Z Amps, and Mike himself gave it a thorough once-over (I think I was charged a "whopping" $75, including parts).

I gravitate to Z's non-MV amps most. The RxES 1x12 is a brilliant amp. Hit the front end with a boost of your choice, and you can do a 4-hour gig (for pretty much any type of music aside from high gain) with that amp, the boost and a Strat or Tele.

The Ray is a criminally underrated clean/AC30ish amp. The Ray head I had through the open back 2x12 had the "footprint" of an EL34-based amp. HUGE. And for a group of boutique amp aficionados, as I have said quite a few times before, it is surprising/shocking that the Ray is not one of the first amps mentioned in threads about great clean, Vox-like, and/or EL84 amps. Crazy great amp, especially through Blues.

And Doc (Mike Z) is such a gracious, customer service-driven, knowledgeable and likeable cat. He's been at it 30+ years, was there at the beginning of the boutique amp revolution, has his own designs/thing going on, has cats like Joe Walsh and Brad Paisley approach him on a regular basis to build amps for gigs in front of 20,000+ people, and has tons of great amps out in the hands of players.

Oh yeah, and his prices have always been amongst the lowest in the boutique marketplace. Sensible, well-built, great sounding, no-frills amps. What's not to like?

According to the labeling on his amp a friend owns Z Wreck of Z Edmund Fitzgerald.

This is my Maz Jr 1x12, L serial (2001), bought used in 2002 for $1k. It's been my main amp since. The stock G12H blew during a gig in 2012. I replaced it with a Mojotone BV-30H. I get my JJ tubes from tubedepot.com and go with the high gain option for the V1 ecc83. I run the master at max and use the volume as the master. This amp's sound is complimented or discussed pretty much anytime I show up somewhere with it. I feel a fondness for it that matches and rivals any of my favorite guitars. I love my Maz Jr. 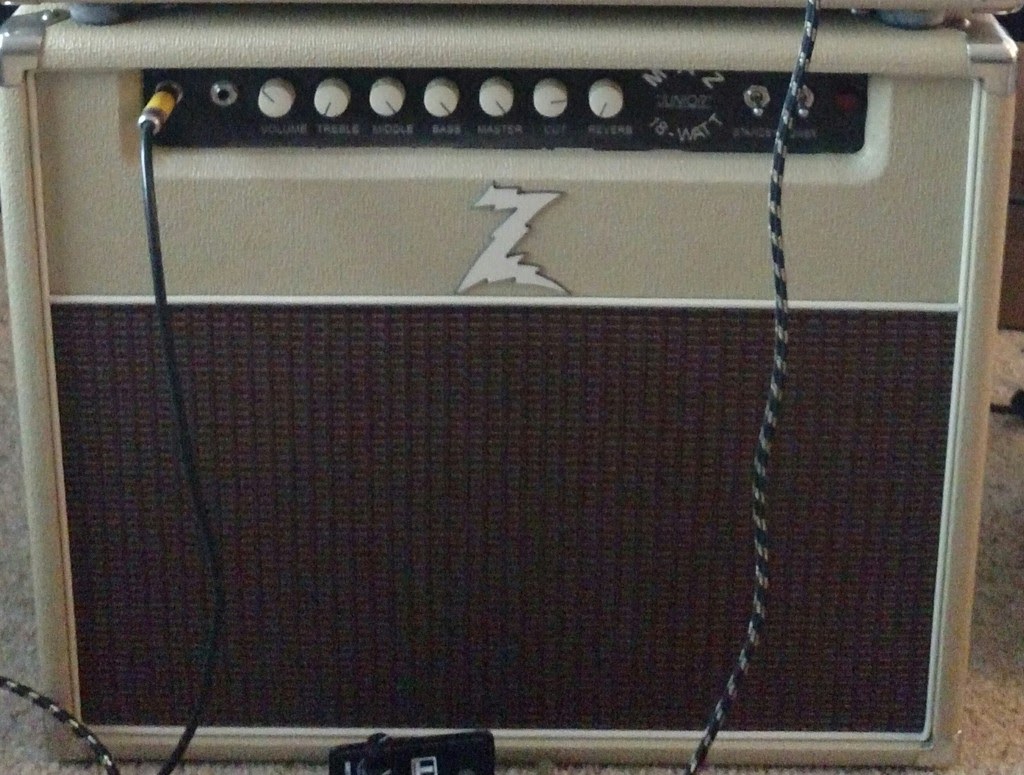 mr zurkon said:
This is my Maz Jr 1x12, L serial (2001), bought used in 2002 for $1k. It's been my main amp since. The stock G12H blew during a gig in 2012. I replaced it with a Mojotone BV-30H. I get my JJ tubes from tubedepot.com and go with the high gain option for the V1 ecc83. I run the master at max and use the volume as the master. This amp's sound is complimented or discussed pretty much anytime I show up somewhere with it. I feel a fondness for it that matches and rivals any of my favorite guitars. I love my Maz Jr.

I can definitely relate to that "fondness". I've liked and enjoyed a lot of different amps, but only my Maz feels essential to me making music.

Crazy that you blew a speaker after a decade. I'm 13 years into my Maz18 thru an old Z cab with Celestion Blue, and I've been worried about blowing it for 12 and a half! Still going strong tho!
I spell it sometimes with a Savage cab running an ASW.

I’ve had my 2002 Ghia for a decade now. It’s just a fantastic piece of gear. Two knobs and the truth. Loved it at band volumes, love it (almost more, actually) heavily attenuated up in the jam room. If I can’t do it with that amp and a few choice pedals, I shouldn’t be doing it. It’s over there<.

Maz 18 NR combo, Ghia head, Z-28 head (x2), Stangray head, EZG-50 head, Therapy. I've played many other models. Missed the Z-28 after I sold it so I got a second one a few years later. Currently have the Z-28 and the Therapy heads. First class amps with their own fairly unique voicings and controls you set with your ears instead of your eyes until you figure them out.