Joshlespaul1952 said:
Would you recommend the brake lite? I’m thinking of getting one to try to keep my practicing at home at a somewhat sane volume.
Click to expand...

It seems to work pretty well, but I don't normally use attenuators so I might not be the best judge. The master volume on the Z-Lux works so well that I probably could live without the Brake Lite. I was using IEM's on the last few gigs and had the amp turned down super low, and I didn't feel like I was missing anything.

This was fun yesterday!

rhinocaster said:
This was fun yesterday!

redgold said:
How was the SRZ? That’s one Z I’m itching to try...
Click to expand...

The SRZ has so much to offer when it comes to Marshall tones. Roll the volume and tone back on the guitar and you can get into JTM45 territory. Bring the volume up and there's that chewy and raw Plexi type grind. Really complex and musical. Then you can wind it up to thick modded JCM800 gain but without the fizzy nature that I hear in lots of JCM800 demos. Really, this amp put a smile on my face like my buddy's SLO did....different beasts but they really cover everything I'd want to hear from a Marshall. VERY cool amp!

And the stack grows taller!

I bought a Galaxie 2x10 when they first came out. Great sounding amp but at 40 watts it was just way too loud for me even with the Brakelite. And heavy!

Teleplayer said:
If you play a Ray through an open back cab loaded with well broken-in Blues, it sounds HUGE - even at lower volumes.
Click to expand...

Vic Interceptor said:
by "junk" I meant Illinois Capacitors and cheap resistors. For those prices I expect at least Mallory or Sprague.
Click to expand...

DR.Z said:
Enough interceptor, Mallory hasn't made Filter caps for over 20 years.
There are Spraque and F&T caps , Carbon film resistors , and custom built Orange Drops in the Remedy.
IC is the only currant manufacture that sells a 47uF 500V filter caps. that my design calls for.
So it was you that stated it has garbage/junk parts , not your pretend friend.
Take your agenda some where else.
Click to expand...

*Note to self...........it's probably not a good idea to make uneducated and/or ignorant comments about a world class amp company's products and build quality, when the founder/owner of that same amp company is known to post in threads about his products.

I only have a couple Z’s but they stack up nicely. My 2.
Posted my Z credentials earlier in the thread

Apologies if I offended Dr Z or the lovers/owners/fans thereof, I just shared my personal experience. A one time, one amp, one owner, local experience.

I played the particular amp in question last night for about an hour. I took a harder look at it, it was the "Remedy" model. The owner said he bought it thinking it would be like a "Souped up Deluxe" because it had 4 x 6V6 tubes. It was plugged into a late 60s slant Marshall cab.

He said the reason he opened it up, was not long after he bought it, it went POP and shut off. Now, a normal person would've sent it back to Dr Z for repair (he bought it new, but not direct from Z) but being a 30+ year electronics tech and guitar player, he opened it up to see what went bang... it was then he found the blown out illinois capacitor.

For the record I have no agenda, in my entire lifetime of guitar interest I've never thought about, cared about, or played anything Dr Z. Had he not brought it up in conversation I would've never given the brand a 2nd thought. There are lots of brands of gear I have no interest in or intimate knowledge of. I think we all share that mentality. I have no axe to grind, and no dog in the fight because I don't make, promote or review gear. I have absolutely NOTHING to gain or lose by voicing my opinion and experience on this or any other piece of gear.

Snake_charmer said:
I only have a couple Z’s but they stack up nicely.

You have some really great tonal options with that pair!

rhinocaster said:
You have some really great tonal options with that pair!
Click to expand...

I’ve only ever owned, but still own, a Maz18 Mk 1 ( but it was sent back to Doc Z and had a lot of updates )and still new (had it about a month now) a ZLux. The ZLux I picked up new from Sweetwater.

I found that Maz used and it was in such awesome condition and it’s still my favorite all time amp. The ZLux is my second favorite I’d say, it’s still so new, though.

They’re my jam. I’ve started to do my own music and over the last year I really went looking for “my amp”.

I went through a lot of amps this last year and a half and before that when I was playing for other people in various genre.

I lost a Friedman PT-20 in the trade up for the Maz and I don’t regret it for a second but I would like to replace it one day.

That said, I’m settled on those two as my main amps. They even sit apart from my other amps in their own space, unintentionally. Before I go to replace the PT I’ll probably shop up other Dr Z options.

I get really different tones from the two, yet both the Maz18 and the ZLux suit what I do. I almost got a Maz38 Mk II for when I need more watts but I haven’t regretted getting a ZLux instead. I now have it in my head that I want to run them both as main amps.

I love the sound. That they look great is a bonus.

I’m anxiously awaiting a Lovepedal ZenDrive I ordered for my Z’s (perfect). It’ll be here Tuesday.

I use either a Mesa Boogie AR 4x10 or a Peavey 1x12 with a greenback I leave the Peavey open backed.

There are my Z's. The one on top is an RB-15, serial #001 - the first amp Mike made. The "RB" are my initials. It's basically a Carmen Ghia with a Master Volume and pull bright switch on the gain. He modeled the 25th Anniversary Ghia after this amp.

The one below it is an SRZ-65, serial #0011. Killer amp, loud as hell! Use it mostly when I play outside festivals when I can open it up. I bought a Z-Best 2x12 cab when I got this amp. I usually play this amp through my Mesa 4x10 open-back cab. 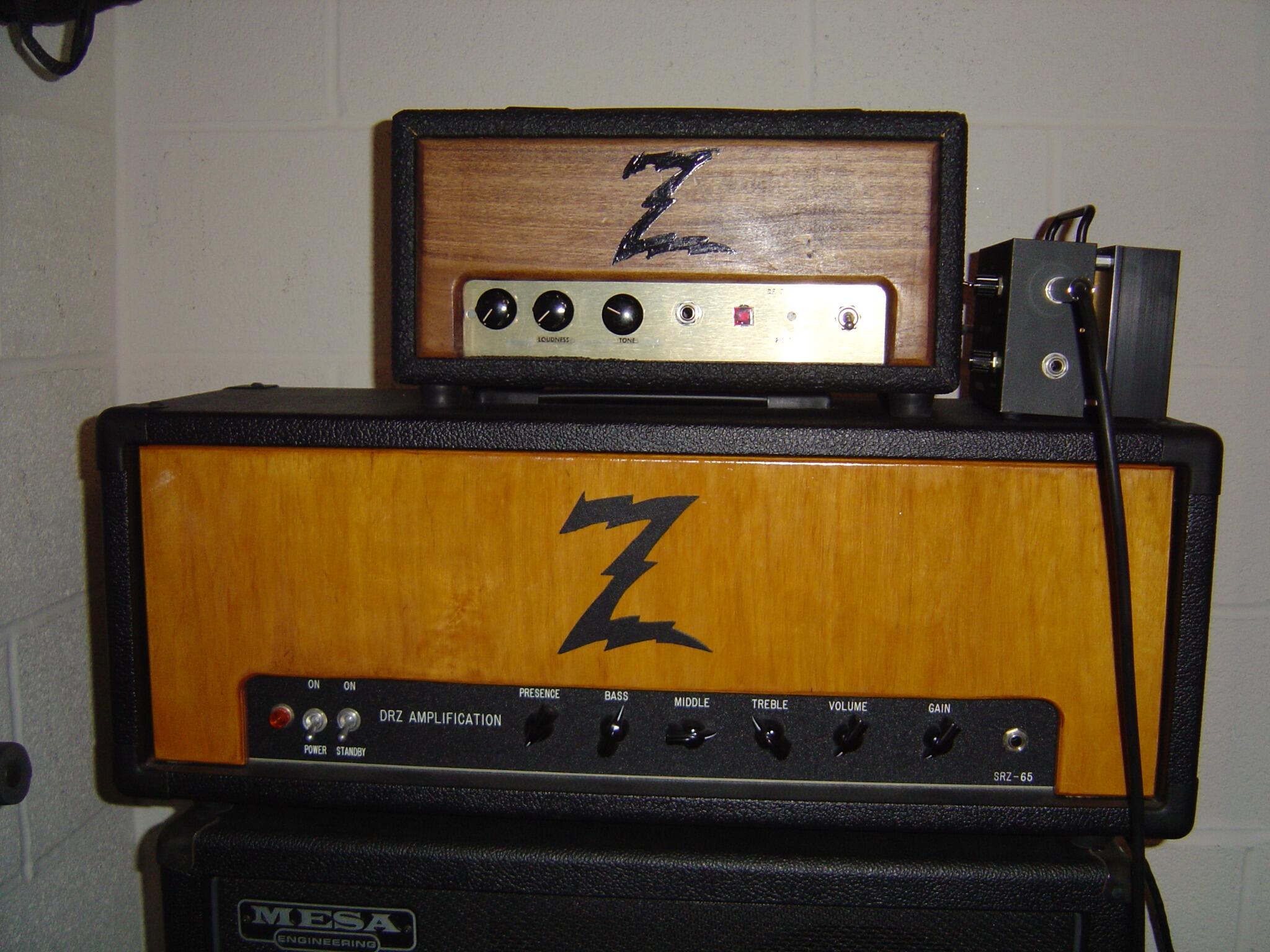 Just got word that my Maz 18 will be shipped back to me this week after the Mk 2 update. Looking forward to checking it out.

Upgraded Maz 18 Jr. Mark II coming in today. It took a good while but about how long they said (5-6 weeks). I've got rehearsal tonight but it's for an acoustic gig, and not sure I'll have the thing rebuilt before it's time to leave anyway. I've got to install the new reverb tank on the side of the cab, etc.

Relatively big stakes for me. I kind of bought this '99 Maz on a whim and it was "ok". Decided to go all-in with the Mk 2 update, so I've invested even more in it. Hope it' good! I shall report back.
B

I’ve got a 2011 KT-45 incoming. It will be the second time that I’ve owned this amp. I’m looking for big cleans now. The first time I owned one I wanted it for the dirty tones, but couldn’t use it anywhere at that volume.
Last edited: May 2, 2019
M

Flyin' Brian said:
According to the labeling on his amp a friend owns Z Wreck of Z Edmund Fitzgerald.
Click to expand...