title pretty much says it all

Mini Hums seem to get a bad rap, but I love Lollar Minis. Not as thick sounding as a full size hum, great cleans (like lipsticks) but also very capable of sounding nasty. You can cover a lot of ground with them.
K

My two main guitars right now use those pickups, lipsticks on a Strat and a Lollar Johnny Smith on an L7.
Good for different things, I would say.

humbucker made from lipsticks.
very mini-ish but different.
G

thanks for the replies fellas!

can anyone describe the tonal differences in depth?
I

It really depends on the tone you're looking for. They're really different pickups. I had an Early 70s Gibson SG Special with stock mini hums for a few months, and to my ears the pickups sounded a lot like normal humbuckers except with more bite and more attack. I have a Danelectro with lipsticks too and honestly I like the lipsticks more. Nothing against the mini hums, but the lipsticks just seem to have more personality. The cleans are outstanding (the best part about lipsticks in my opinion) but they also sound really nasty with fuzz and really trashy with slight overdrive. I've since sold the SG and will never get rid of the Danelectro.

Garage rock/garage blues and psychedelic garage are the tones/sounds im going for.

i think you might be right ilikeguitar90, the more i hear lipstick pups the more i want them for my music, but its really hard because i seriously dig the mini humbuckers too and i think they too suit my music

I'm the most ardent mini-hum advocate I know and am particularly fond of the Lollars, which are almost 3D in their complexity and richness, and I've also got a '76 LP Deluxe in which the stock minis are surprisingly macho, but with the ability to get sweet and twangy in a way that the brightest PAF never could (I didn't give myself the handle "Powertwang" for nothing; I'm all about treading that line between Joe Walsh, David Grissom, Danny Gattan, Billy Gibbons, Neil Young, Mark Knopfler, et al and almost every gig I play involves a Tele, some sort of 2-HB Gibson with a Bigsby and usually both clean and filthy dirty pedal steel on my Multi-Kord.) and I think that a good pair of minis is the best way to tread that line, cover all the bases, etc.

All of which is to say that I'm forever using (or at least striving for) a tone that has a mix of some serious vintage twangy character and the ability to get varying degrees of mashed-amp dirt and, as an owner of an incredible purple '56 Dano U2 (that used to belong to the guy who wrote the song "Play Guitar" that Mellencamp had a hit with back in the 80s) and a whole messa other Danos, from 6-string baritone, to 12-string to short-scale longhorn bass, my strong belief is that while the lipstick is among the most unique, interesting, chim-ey, garage-y, glorious pickups out there, it simply doesn't move electrons in enough quantity to function as a whole-set kinda sound unless your gig allows you to have a somewhat idiosyncratic, unconventional tone (eg White Stripes/Black Keys).

I don't mean that in a bad way - not at all - but most of my gigs these days (and I think most gigs of the guys I read here - call for me to cop a variety of of types of tones and while my singer(s) might get a real kick out of the singular tone that my U2 kicks out, they wouldn't necessarily want me to be trying to cover everything from Vince Gill to Allman Bros. to John Hiatt to Clapton to Neil Young, etc. on it all night long.

In a word, they're thin - wonderfully so - and I guess the simplest way to put it is that when I grab mine on my way out the door to a gig it's as an extra accent-type flavor to augment my mainstays, not the workhorse of the night.

One thing to keep in mind, though, is that absolutely great Dano repros are available all over the place for $250-$300 and Epiphone has made some absolutely epic import Riviera reissues that can be a bit hard to find, but are usually reasonably priced when they show up so, as usual, I say why choose? Buy both!
M

what about firebird pickups vs lipstick. I saw a Johnny Winter interview he played a few notes on his firebird and it was glorious

I have both a lipsticker (Ibanez Talman) and a minihumbucker (Gibson LP Deluxe.) Both so different, it's almost like apples and oranges.
P

I have 3 Danelectros...bass, baritone and a DC-3 which has been modded to string-through like a tele. I love lipstick pickups. They're chimey and great sounding clean and hold up really well w/ lots of fuzz.

I have no experience w/ minibuckers but would definitely say that lipsticks are worth trying out.

The Lollar firebird minis are impressive. Have two in a Soloway Swan, with a parallel, series switch. More tele twang than regular minis, but that's not the whole story. They overdrive in the most beautiful way, and respond very well to tone knob twisting. Of all Jason Lollars p/us I've heard, these are my favorites.
MD

Firebird. My favorite, along with P90s. Think Neil Young on the Firebird. Also, Warren Haynes gets his heaviest sounds live on a non reverse Firebird.
J 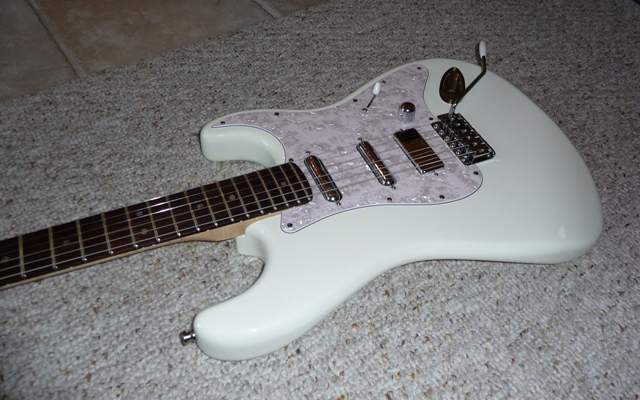