I had my old JCM 800 combo amp go south on me before a gig. I had to use a Peavey Bandit as a backup. The amp failure was my much younger inexperienced self being the fault. Sat in the car all day in the winter and I took it out to our gig and fired it up right away. Nicely done! Poof!

My pre-04 Bogner XTC failed as one of the Winged C tubes went south before a gig. I actually had about 30 minutes so I put in a new fuse and pulled the 2 power tubes dropping it to 50watts and put the speaker in the 4 ohm slot. All worked great and the gig was saved! I was lucky that time!

Back in the early '80s, my Fender Concert II 4-10 develop a hum requiring a filter cap to be replaced. I had it retubed at the same times. On the way home the amp shifted in the back of my car and I heard a loud bang. The reverb didn't work when I got home. A tube had cracked with the impact.

Several years ago I was getting ready for a gig and my tweed Deluxe clone went silent. I was 5 minutes from home and grabbed another amp. It turned out that the tweed Deluxe's PT had failed. By then, I worked on amps and repaired it myself.

Too many to recount, sadly, though luckily only a few times at a gig.

The first 3 years I would need to get a new amp every 5 or 6 months because they would start on fire. Even my Champ!

I saved up and bought a Boogie MKIIB and it was my only amp for the next 24 years.

Now the better brands are really durable and great sounding. Only when a tube fails do I need repair work.

Catastrophic tube failure (and smoke!) A few SS amps which failed and were not worth repairing. Numerous component failures. Points the manufacturer neglected to solder. Wrong component values from the manufacturer. Poorly executed mods which needed to be fixed. Cold solder joints. Replaced OT. Old amps with few original caps. Cap jobs. Multiple speaker failures and recones. Multiple cabs wired wrong. Many, many tube failures. Suboptimal lead dress. Excessive noise/hum which had to be rectified. Several amps which used components that were rated too low. I had an amp that randomly power cycled due to diode failures.

I'm not going to describe or enumerate everything - that is just a few minutes of recollection.
B

Well I had a Marshall TSL combo that used to heat up and smell bad but I don't remember it actually failing. So nearly 40 years, hundreds of gigs, and a couple dozen amps and never had a failure.

And I've lugged a backup to most of those gigs

Nothing failing during a gig thankfully.

A used Fryette Memphis 30, a great sounding amp, crapped the bed twice at home and the last time on a gig where I had no back up. Club full of people, but close to home. I spent a bunch on that amp; tubes, shipping to Fryette, more tubes. When it worked, it was heavenly. After that gig, I bought a Blues Cube Artist and gigged the hell out of it no problems. That Fryette sits in a closet.

I dealt with corroded inputs, broken of pots, short powerdrops indicating tubes where at the end…but never to the point where it was a problem at a gig.

One amp failure in 50 years of playing. During a gig 6 or 7 years ago my Carmen Ghia (head and 12" Z cab) fizzled out on the last song of set two.

I suspected a tube and a quick look during the break revealed this: 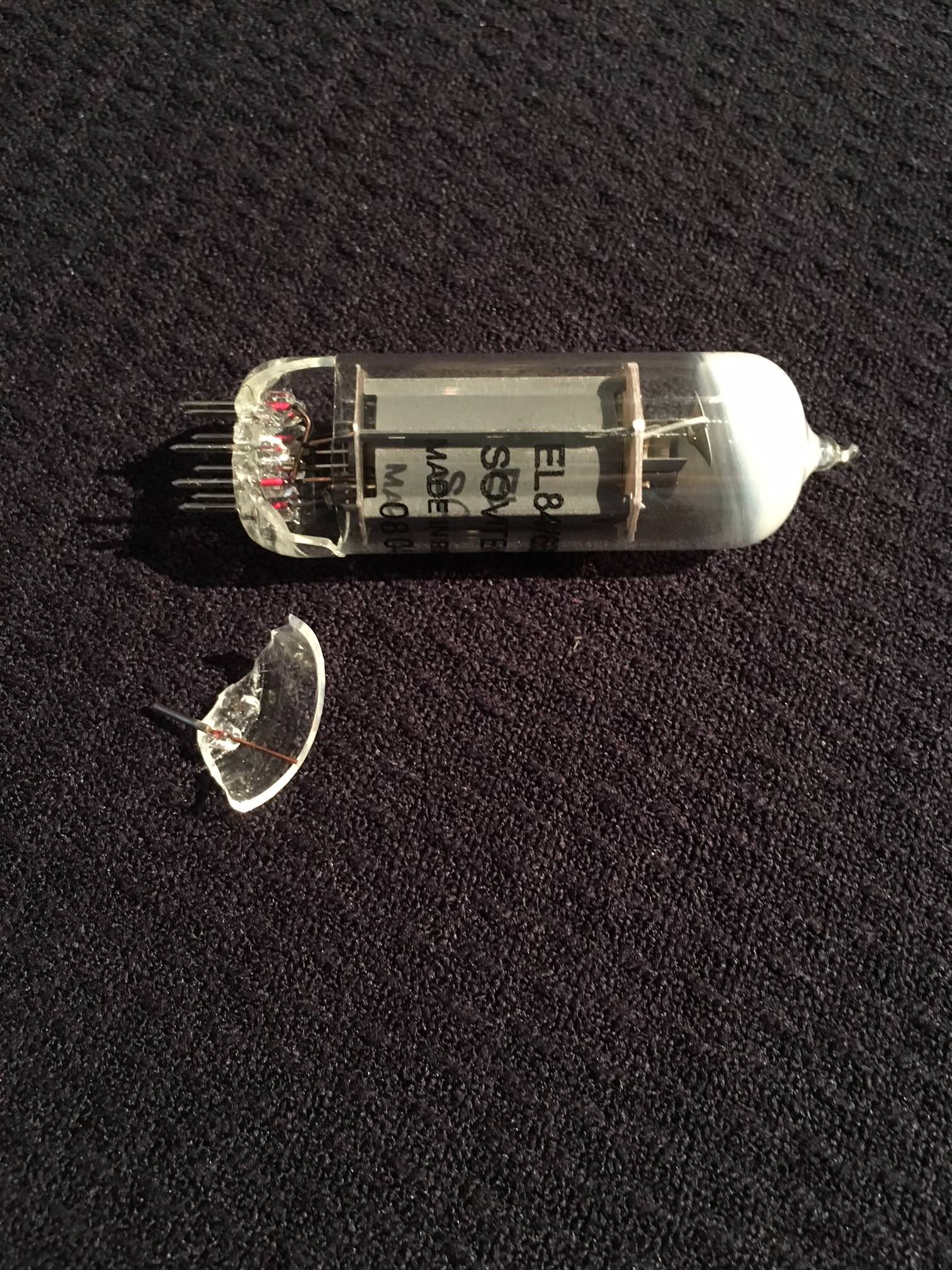 My Ghia is a 2001 and the tube was an original that had lasted approx 15 years.

Fortunately our keyboard player had a couple of spares tucked inside the cabinet of his B3 and I was back in business for the next set. After that I started carrying spares but have yet to need one.

Seymour Duncan convertible amp went up in flames during a gig. The sad part is just before It burnt up it was the best it ever sounded. Had a Dr. ZMAZ 38 head stop working on a gig. Sent it back to the good Dr who got it up and running again.

Back in '94, in High School, my band was playing a Sweet Sixteen party and our PA kept overheating, which it never did in our 2-3 hour rehearsals. We would play for 10 minutes till it would overheat and then have to bring it outside to cool down for a few songs and then bring it back. Then my Peavey Mach IV bass head which I used as a guitar cab popped too, and the DJ let us plug in to his rig. Glory Days indeed.

Only one amp, and it failed a few times - Jet City Earhart 50 (re-badged Cornford MK50HII). Handful of times would have zero sound. Once during a recording session, and a few times at gigs. Oddly enough after checking cable routing, fuses, etc for maybe 5 or 10 minutes it would eventually have sound and work just fine, but luckily never had it die on me while using it; just only on first power up for the day. A year or so ago I pulled the chassis and found the culprit but for the life of me can't figure out what exactly it was. It was something that stood out to me and I do remember repairing it, so it may have been the NFB wire with a bad solder joint at the speaker jack, or maybe the standby switch.

Maybe 3 or 4 times in 35 years, both tube and analog solid state. But luckily each time was in rehearsal or at home, not on a gig yet, knock on wood.
G

I had the same exact thing happen. Either a mouse or a rat, couldn't tell, only the skeleton was left. The amp didn't fail though, it kept working. Found the mouse/rat when I took it apart to clean it up

I had the fuse on my 50/50 power amp blow during soundcheck. Replaced it, played the gig.

C-30 amp got knocked off the stand and cracked a tube. Didn't seem to have any affect during the gig, but noticed it afterward. Spring snapped in the reverb tank (that got noticed immediately)!
Once blew a tube in a Fender Champion during practice; it was just not cut out to play with the big boys...

Never in 50 years. I did have a situation of bad power that my tube amp didn't like so I used the trusty Crate Powerblock for the gig. It certainly doesn't provide the tone of a tube amp but it's a great substitute for certain situations.

in 45 years of gigging, only a handful.

After the '64 super failed and I had to finish the session with a just-awful sounding Sunn amp, I've always brought SOME kind of usable backup, sometimes a Blues Jr, once I used a solid state Fender Mustang II battery powered portable amp and an SM57 - but it got me through the gig with reasonable enjoyment.

modernp said:
Seymour Duncan power amp one channel started smoking with flames out the back. Fender twin falling out the back of our van and bouncing down the road. Jubilee went up in a puff because of a lightning strike. Blues junior mouse getting electrocuted. Think that's it.
Click to expand...

My amp took a tumble this saturday off a 5 foot stage. Plugged it back in and did the festival no issues...
I used to travel with my Mesa 50 caliber plus and stick my clothes for the weekend in the back of the cab. I rolled it from the trainstation, hit a snag and dropped it breaking a power tube. Played a gig that night and it made it through.
I have nothing but love for most tube amps!
You must log in or register to reply here.
Share:
Facebook Twitter Reddit Pinterest Tumblr WhatsApp Email Share Link