Looking at a Gibson with headstock repair.........

Going to check out a Gibson with a headstock repair tomorrow.

What should I be looking for?
Functioning truss rod?
What else?

Just as long as it looks clean enough and feels stable. A headstock repair is a great way to get a good deal.

If it plays, feels and sounds great at a headstock repair price then go for it. Otherwise walk away.

Headstock repairs greatly reduce the value of the guitar, regardless of how good the repair is. If they don't want to bargin then leave it. To many mint used out there to pay full or almost full price for one with a broken headstock repair.

If the price is right, go for it

Plus, it's my dream finish

What year, model, and price?

A guitar with a headstock or neck repair is worth roughly half as much, so negotiate accordingly.

Other than that just make sure the frets are straight and nothing else is starting to seperate.

1989 62 RI SG. Price to be negotiated as far as I'm concerned. It has some other very visible cosmetic damage too. If it wasn't local I'd never have given it a second look. Going rate in a good one seems to be about 1400/1500. If it's a player, and it's solid, I'm in for the right price. I'm also fully prepared to walk.

I know people have scored some nice guitars with stable repairs and some here would never be in the same room with such a monstrosity. I'm interested in what the signs of a solid or not so solid repair.

IMO, a good repair should be clean (no filler or chunks missing) and be barely visible (but still BE VISIBLE)

Here's mine...looks even better now after I used a red fine tip sharpie on the seams and polished over it several coats (but it's still clearly visible when closely inspected) And yes, I would make sure the truss rod works as expected

Like has been said, get a huge discount over normal used value
Last edited: Jan 6, 2017
T

Clean, barely visible, and smooth to the touch.

I picked up my '77 Gibson LP Deluxe for $750 w/ OHSC . I had a cracked headstock,and I had my local guitar guy repair, and he did an amazing job. 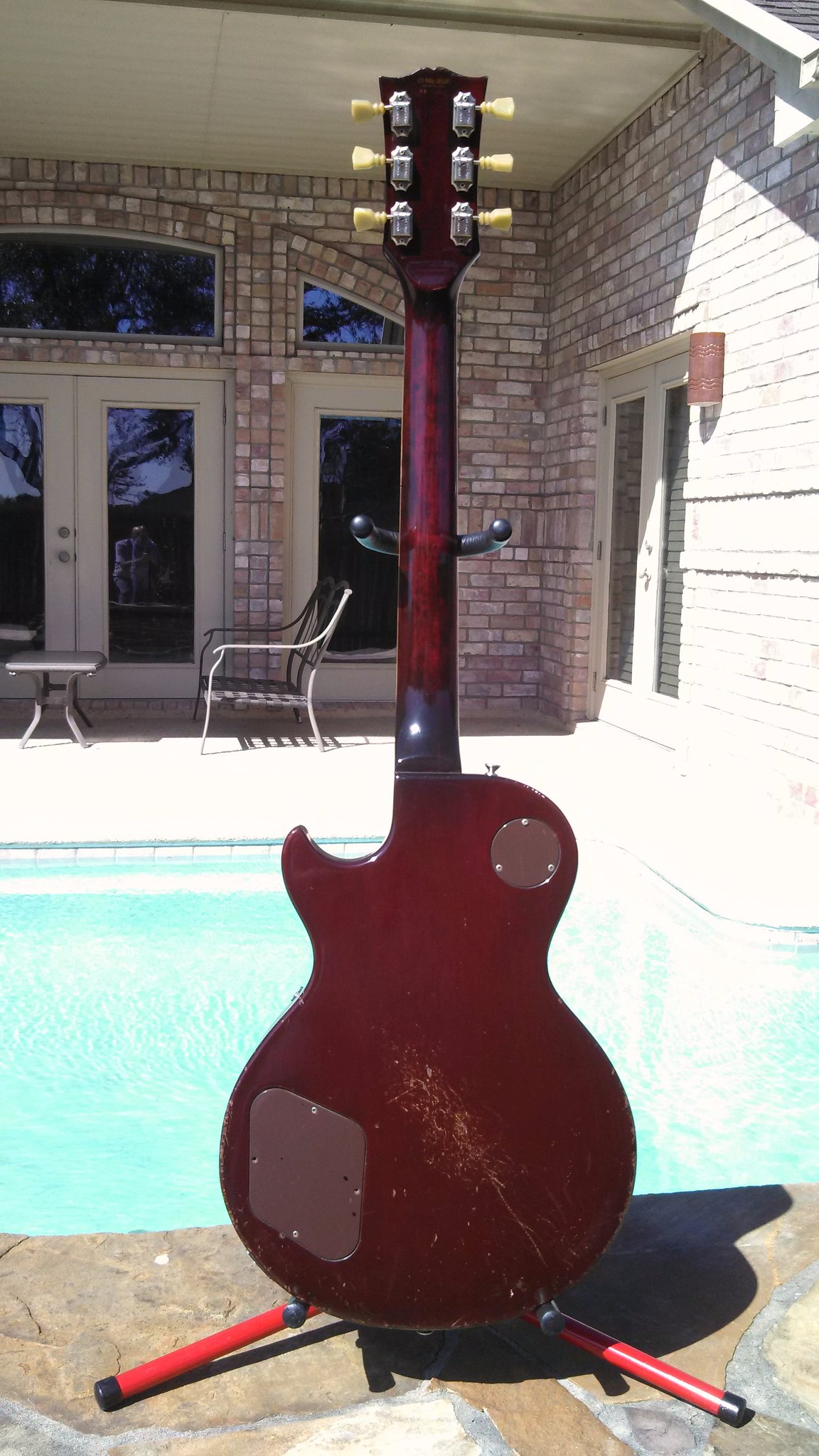 This. Very much this. I had an Ibanez that had to have a repair. The finished result was barely noticeable. It played fantastically after.

Turns out there was a small stable crack in the neck and no previous repair. However, at some point in its life it appears that it was smashed ala Townsend/Cobain. The neck was broken off the body, then after the bridge fell off, the body was repeatedly slammed into something which left huge divits on the face.

It was put back together a long time ago. Not a pretty job, but it's stable. Old old Seth Lovers installed, played killer with no buzz, stable tuning, low action, working truss rod. Appears to have legit playwear, but good frets and generally maintained.

The price was right and I brought home a "rescue" SG. I'm going to take it to my tech for a onceover once the temperature warms up a bit. May or may not address cosmetics, we'll see. Playing the hell out of as is for now. Pics to come later. Nice. If I had it, I'd be masking cracks well and carefully wicking in thin superglue. This is tricky and involves removing tape right away and dealing with finish. If those are just finish cracks and don't open, I'd leave it alone.

I'll do glamour shots another day. Here is a decent overall picture of the body. Glad they got to put humpty back together again. Many of those wounds are typical sg.
Looks like an ex-wife revenge act.
Sounds like you got it for a steal though, congrats!

I have a real '61 LP/SG I got at GC with similar repairs for under $1K. Looked like Duane Allman threw it across the tour bus.

At some point I'm selling my LP/SG Olympic White/Maestro Historic if your addiction continues!

BK Verbs said:
I'll do glamour shots another day. Here is a decent overall picture of the body.

Dang! I had a hammer smashed '88 Les Paul with the same breaks, actually, one more in the middle of the neck.

paulbearer said:
Glad they got to put humpty back together again. Many of those wounds are typical sg.
Looks like an ex-wife revenge act.
Click to expand...