Looking for cheap "beater" guitar and would love some advice!

This is some background (feel free to skip it)

Hello. I'm a long time lurker but first time poster on TGP. I am currently playing in a 60ish garage rock band with some friends and our lead singer/rhythm guitarist is a complete animal. His strat looks like it has been through a blender (or maybe a wind-tunnel)-seriously impressive stuff folks, next time we practice I'll be sure to get some pictures so you guys can all ooh and ahh over it. I come from a more country background so i feel kind of awkward just standing a playing while he is thrashing around (my roomate told me i look boring) and i think i would be a bit more animated if I didnt care so much about my guitar. I'm currently playing a Reverend Warhawk 1 that i really love and would like to keep relic-free for the time being.

Now onto the question!

I'm looking for a cheaper guitar (500 is about all my college student budget can afford) and was wondering which budget guitars you guys liked! I would really like a guitar with either single coil or p90 pups. Guitars I've looked at so far are some squier and mexican fender tele's (i really dig this one http://www.fender.com/products/search.php?partno=0301250550), but I've also been looking into more gibson-ish guitars like the JHS Vintage DC's, PRS Ones, Hamer XT's and even a couple melody makers. I've always loved the look of the flatter topped gibson les paul juniors, dc's and melody makers. I've even been considering some danelectro's-the double cuts look incredible and i hear they are good sounding and reliable guitars. What are you guy's thoughts? I'm open to any suggestion!

There's a melody maker for under 500 on the emporium right now, looks really nice.

Vintage V6. I had one and it felt sturdy and I think one of those would be great for gigging. I'm not talking about the ICON version (worn finish), but the Reissue. Than you can add your own battle scars. More fun that way

I also had a Vintage VR100. The single cut version with two pickups. The bridge pickup is the same as the one on the Junior DC version. It was a light guitar, fun to play and sounded good.
Last edited: Feb 1, 2012

ESP ST 203 either with or without the humbucker in the bridge and FR. Modified mine quite a bit but its quite good even completely stock. An added plus, if you're into modifying your gear, is that the humbucker comes with 4 conductor wiring allowing multiple switching options.
C

Thankls for the input guys! I've been keeping my eyes opened for nice used fender-I've always wanted a tele but I think I might just wait and save up for a nice one (the new reverend eastsider looks incredible). As for the melody maker, I played one in a shop and the output seemed a little on the low side? Are they versatile guitars? They are in my price range though and have such a cool vibe. And I love the look of that esp!!! They have one in a local shop that I play almost every time I go in-It's great! They also have a tele model in the same series! Has anyone played it?

scaryfoot said:
Vintage V6. I had one and it felt sturdy and I think one of those would be great for gigging. I'm not talking about the ICON version (worn finish), but the Reissue. Than you can add your own battle scars. More fun that way

I also had a Vintage VR100. The single cut version with two pickups. The bridge pickup is the same as the one on the Junior DC version. It was a light guitar, fun to play and sounded good.
Click to expand...


could you tell me more about this guitar?? that is actually the exact one I'm looking at. I have no experience with them as a maker but I've browsed thier site many a time. I wonder how they compare with the hamer xt jr's (very similar guitar in the same price range). Also, this year they are reissuing the danelectro dc with a modified not wooden bridge! It looks pretty cool imho-any thoughts?
X

Check out the 80's vintage Ibanez Roadstars. Should be going up in value and are really nice players.
C


Guitar Center has great deals for them all the time.

cofro17:
If you mean the VR100 it was the first guitar I've tried with soapbar style pickups. I thought they were P90's but they are stacked humbuckers (or P100 as Gibson called theirs)
The sound was somewhere between single coils and humbuckers. A bit unbalanced maybe, the bridge pickup had less output than the neck pickup. On the humbucker LP's I've had it has been the opposite. At first I thought the bridge sounded thin, but it grew on me. They DID hum some, but not too bad.
It was a cool guitar and I regret selling it.
Mine was made of poplar and I would guess it didn't weigh more than 7 lbs.
There were a couple of slightly sharp fret-ends. No dry fretboard.
Now they are made of mahogany I read on the JHS website.
http://www.youtube.com/watch?v=1hqvITwV7m0
http://www.youtube.com/watch?v=SUyan37IlJ0

The V6 (Strat) felt really good. Almost like a broken in guitar, and it was brand new. It was heavy though. I wasn't into Strats at the time, so I sold it almost right away.
Last edited: Feb 1, 2012

Hmm so you have something like this, cost about 750?

But want a beater version? How about an Eastwood Stormbird? A PRS SE would be a great match for you.

If you'd like a tele, there are a lot of really nice copies available. I'd keep my eyes out for one of the old Fernandes TE series.
Another one to consider is the vintage Peavey Patriot.

How about G&L Tribute series ? Quality product ,inexpensive used .I have a bluesboy thinline that I would put up against most Fender made in the USA teles anyday.The only difference between mine and a USA G&L is the neck pickup on mine is by G&L USA whereas the neck pickup on the USA model is a Seth Lover.Also have a S-500 from G&L wich is like a ballsey strat, bought for 325 used.Then there are used and new Dillion guitars wich may or may not even need a pickup change .

for $500 bucks I got a minty hamer special p90 from guitar center.

definitely NOT a beater.

I originally bought a P90 equipped Tele there to use as a beater to take when we go camping with a bunch of friends since I didn't want to mess up anything nice. I now own 4 Rondo guitars and two of them are my main gigging guitars. I treated them to some upgraded pickups and a few pieces of hardware. They're ridiculous for the money.

I've been totally delighted with my G&L Tribute Classic ... George and Leo's update on the tele. The Tribute series guitars are made in Indonesia (by Cort I believe) so the price should be good (I got mine in Australia for AUD$495). I'm thoroughly impressed with the quality when taking into account the price ... to the point where I've ended up being a bit precious about the guitar ... I tend to look after it like I do my other guitars ... one of which cost exactly 10 times the price.

Get the model with the ABR bridge, 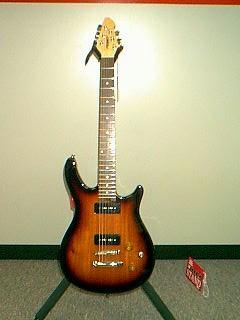